According to the World Health Organization, half of the World’s population, approximately 3.3 billion people, is at risk for developing malaria. Nearly 700,000 deaths each year are associated with the disease. Control of the disease in humans still relies on chemotherapy. Drug resistance is a limiting factor, and the search for new drugs is important. We have designed and synthesized new 2-(trifluoromethyl)[1,2,4]triazolo[1,5-a]pyrimidine derivatives based on bioisosteric replacement of functional groups on the anti-malarial compounds mefloquine and amodiaquine. This approach enabled us to investigate the impact of: (i) ring bioisosteric replacement; (ii) a CF3 group substituted at the 2-position of the [1,2,4]triazolo[1,5-a]pyrimidine scaffold and (iii) a range of amines as substituents at the 7-position of the of heterocyclic ring; on in vitro activity against Plasmodium falciparum. According to docking simulations, the synthesized compounds are able to interact with P. falciparum dihydroorotate dehydrogenase (PfDHODH) through strong hydrogen bonds. The presence of a trifluoromethyl group at the 2-position of the [1,2,4]triazolo[1,5-a]pyrimidine ring led to increased drug activity. Thirteen compounds were found to be active, with IC50 values ranging from 0.023 to 20 µM in the anti-HRP2 and hypoxanthine assays. The selectivity index (SI) of the most active derivatives 5, 8, 11 and 16 was found to vary from 1,003 to 18,478. View Full-Text
Keywords: triazolopyrimidine; trifluoromethyl; malaria; P. falciparum; PfDHODH triazolopyrimidine; trifluoromethyl; malaria; P. falciparum; PfDHODH
►▼ Show Figures 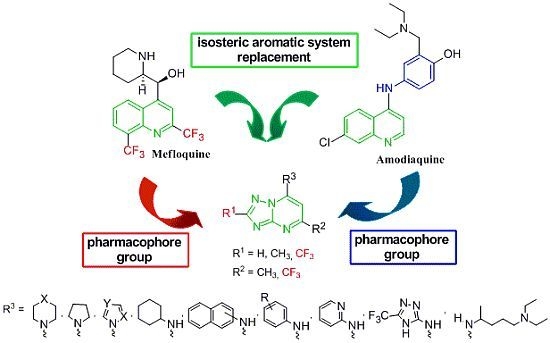