Lycoris species have been known since long ago as a multi-utility ethnomedicinal herbal in China. It has been reported to exhibit a number of properties such as anticancer, neuroprotective, and antibacterial activities. In the present study, the anticancer efficacy of dichloromethane extracts of Lycoris aurea (DELA), was evaluated both in vivo and in vitro using murine sarcoma 180 cells. To evaluate the effects of DELA on apoptotic cell death, flow cytometry and Western blotting were performed. DELA demonstrated promising inhibition effects on sarcoma 180 cells in vitro and a 53.49% inhibitory rate on cancer cells in vivo. DELA treatment increased thymus indices and spleen indices in vivo, indicating that it reduced tumours, but did not damage the main immune organs. The DELA-evoked increase in apoptotic cell death was accompanied by occurrence of cleaved caspase-3 and decreases in the ratio of Bcl-2/Bax. Further purification and LCMS analysis showed DELA contained homolycorine, 2α-hydroxyoduline, oduline, hippeastrine, 2α-hydroxy-6-O- methyloduline, and 2α-methoxy-6-O-methyloduline. These results indicate that DELA exerted its anticancer effects, at least in part, by inducing cancer cell apoptosis and thus can be considered as a potential candidate agent for treatment of cancer. View Full-Text
Keywords: Lycoris aurea; anticancer activity; apoptosis; lycorerine-type alkaloid Lycoris aurea; anticancer activity; apoptosis; lycorerine-type alkaloid
►▼ Show Figures 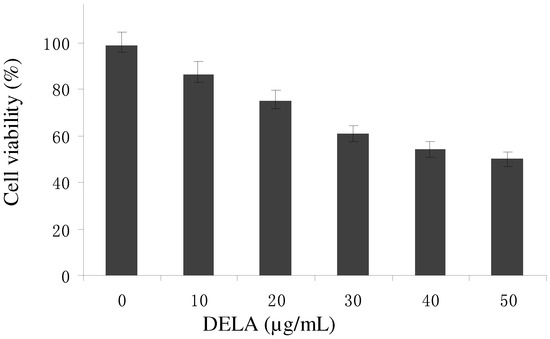