Understanding the Mechanism of the Intramolecular Stetter Reaction. A DFT Study

P-5m, an octapeptide derived from domain 5 of HKa, was initially found to inhibit the invasion and migration of melanoma cells. The high metastatic potential of melanoma cells was prevented by the HGK motif in the P-5m peptide in vitro and in an experimental lung metastasis model, suggesting that P-5m may play an important role in the regulation of tumor metastasis. The aim of this study was to measure the effect of P-5m on tumor metastasis of human hepatocarcinoma cell line (HCCLM3) in vitro and in vivo in a nude mouse model of hepatocellular carcinoma (HCC), and detect the mechanisms involved in P-5m-induced anti-metastasis. By gelatin zymography, matrix metallo-proteinases 2 (MMP-2) activity in HCCLM3 was dramatically diminished by P-5m peptide. In addition, the migration and metastasis of HCCLM3 cells was also inhibited by the peptide in vitro. In an orthotopic model of HCC in nude mice, P-5m treatment effectively reduced the lung metastasis as well as the expression of MMP-2 in the tumor tissues. Overall, these observations indicate an important role for P-5m peptide in HCC invasion and metastasis, at least partially through modulation MMP-2 expression. These data suggests that P-5m may have therapeutic potential in metastatic human hepatocarcinoma. View Full-Text
Keywords: GHGKHKNK octapeptide; hepatocellular carcinoma; MMP-2; HCCLM3; cleaved high molecular weight kininogen GHGKHKNK octapeptide; hepatocellular carcinoma; MMP-2; HCCLM3; cleaved high molecular weight kininogen
►▼ Show Figures 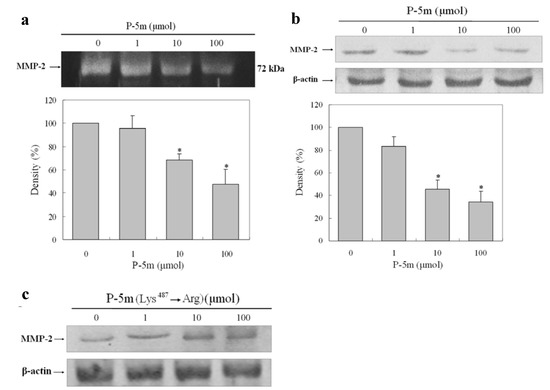