:
This article presents an investigation of heat transfer in a porous medium adjacent to a vertical plate. The porous medium is subjected to a magnetohydrodynamic effect and suction velocity. The governing equations are nondepersonalized and converted into ordinary differential equations. The resulting equations are solved with the help of the finite difference method. The impact of various parameters, such as the Prandtl number, Grashof number, permeability parameter, radiation parameter, Eckert number, viscous dissipation parameter, and magnetic parameter, on fluid flow characteristics inside the porous medium is discussed. Entropy generation in the medium is analyzed with respect to various parameters, including the Brinkman number and Reynolds number. It is noted that the velocity profile decreases in magnitude with respect to the Prandtl number, but increases with the radiation parameter. The Eckert number has a marginal effect on the velocity profile. An increased radiation effect leads to a reduced thermal gradient at the hot surface.
Keywords:
porous medium; vertical plate; entropy; MHD

The problem under investigation belongs to a steady flow of viscous, incompressible fluid across a porous medium bounded by a vertical plate, as shown in Figure 1. The fluid is assumed to be non-scattering, grey-emitting, and radiation-absorbing. The normal x and y directions are considered along with the horizontal and vertical directions. The properties of the fluid are considered to be constant, apart from the density that allows the natural convection of fluid to take place. The temperature variation is considered only in the body-force term. The governing equations can be given as:
Continuity equation:
Momentum equation:
Energy equation:
The continuity (1) leads to: where uo is the constant suction velocity normal to the plate.
Using the Rosseland hypothesis [36,37] as:
can be expressed as:
The Rosseland approximation is valid for an optically thick medium. Excluding the higher-order terms of Taylor’s series expansion would result in a negligible error in Equation (6)
In view of Equations (4)–(6), the Equations (2) and (3) can be shown to have the form as:
The related boundary conditions of present problem are given as: where is the temperature of the plate.
The following non-dimensional parameters are used
Substituting the above non-dimensional parameters into Equation (7) and (8) yields:
The boundary conditions take the form

The physical insight of the problem under investigation can be obtained by solving Equations (12), (13) and (17). These equations are solved numerically by the finite difference method. The outcome of the solution is the velocity and temperature profiles, along with the entropy generation. These equations are further simplified by converting them into first-order ordinary differential equations that make them easier to solve. The domain is divided into 1000 points in order to obtain the desired accuracy of 10−5. The results are compared to available data to ascertain the accuracy of the current methodology. The comparison is shown in Figure 2 and Figure 3, which clearly demonstrates the accuracy of the present method.

The investigation was carried out with respect to various parameters involved in the governing equations, including the Prandtl number, radiation parameter, permeability parameter, Grashof number, viscous dissipation parameter, magnetic parameter, Eckert number, Reynolds number, and Brinkman number. The results are plotted in terms of velocity, the temperature profile in the porous domain, as well as entropy generation with respect to heat transfer, fluid flow, and magnetic effects.

Entropy is a term that describes the disorder or usefulness of energy in any process. Thus, the entropy presents an overview of how efficient a process is by reducing its irreversibility. The lesser the irreversibility, the better the system performance. Entropy can be generated due to various factors such as heat transfer, fluid flow, and magnetic effect. This section is devoted to understanding the different types of entropy generation associated with the current problem. The individual entropy is listed for three terms arising of Equation (17), which are thermal entropy (ST), fluid flow entropy (SF), and magnetic-field-related entropy (SM).
Figure 14, Figure 15, Figure 16 and Figure 17 show the entropy variation in ST, SF, SM, and S-Total with respect to changes in the Reynolds number. It is found that the entropy generation increases with an increase in the Reynolds number. The Reynolds number represents the ratio of inertia to viscous force. The increased inertia force leads to higher entropy for ST, SF, and SM, as indicated by Figure 14, Figure 15 and Figure 16. The thermal and fluid entropy is higher near the vertical plate, whereas the magnetic entropy initially increases and then decreases. The total entropy, which is the summation of all individual entropies, is dominated by the fluid flow entropy.
Figure 18, Figure 19, Figure 20 and Figure 21 illustrate the impact of the magnetic parameter on ST, SF, SM, and S-Total. As shown in these figures, the change in magnetic parameter does not have much impact on ST and SF, but slightly increases SM. The total entropy change with respect to M is marginal even though it affects SM. This is because the overall impact of SF and ST is much higher on S-Total compared to SM. Figure 22, Figure 23, Figure 24 and Figure 25 show the effect of the Brinkman number on entropy generation. Thermal entropy has a negligible effect when the Brinkman number is increased. However, fluid and magnetic entropy increase with an increase in the Brinkman number. The total entropy increases due to an increase in the Br.
Figure 26, Figure 27, Figure 28 and Figure 29 illustrate the effects of the radiation parameter on the entropy generation. The thermal entropy, fluid entropy, as well as magnetic entropy increase when the radiation parameter is increased. This leads to an increase in the system’s overall entropy due to an increase in the radiation effect. The total entropy of the system falls sharply close to the hot surface where the change is found to be gradual.

The present article investigated heat transfer behavior in a fixed porous domain adjacent to the permeable vertical plate subjected to suction velocity and magnetic effects. The analysis was carried out with respect to entropy generation due to various parameters. This work revealed the following concluding points:

The authors extend their appreciation to the Deanship of Scientific Research at King Khalid Uni-versity for funding this work through the research groups program under grant number RGP.1/327/42. 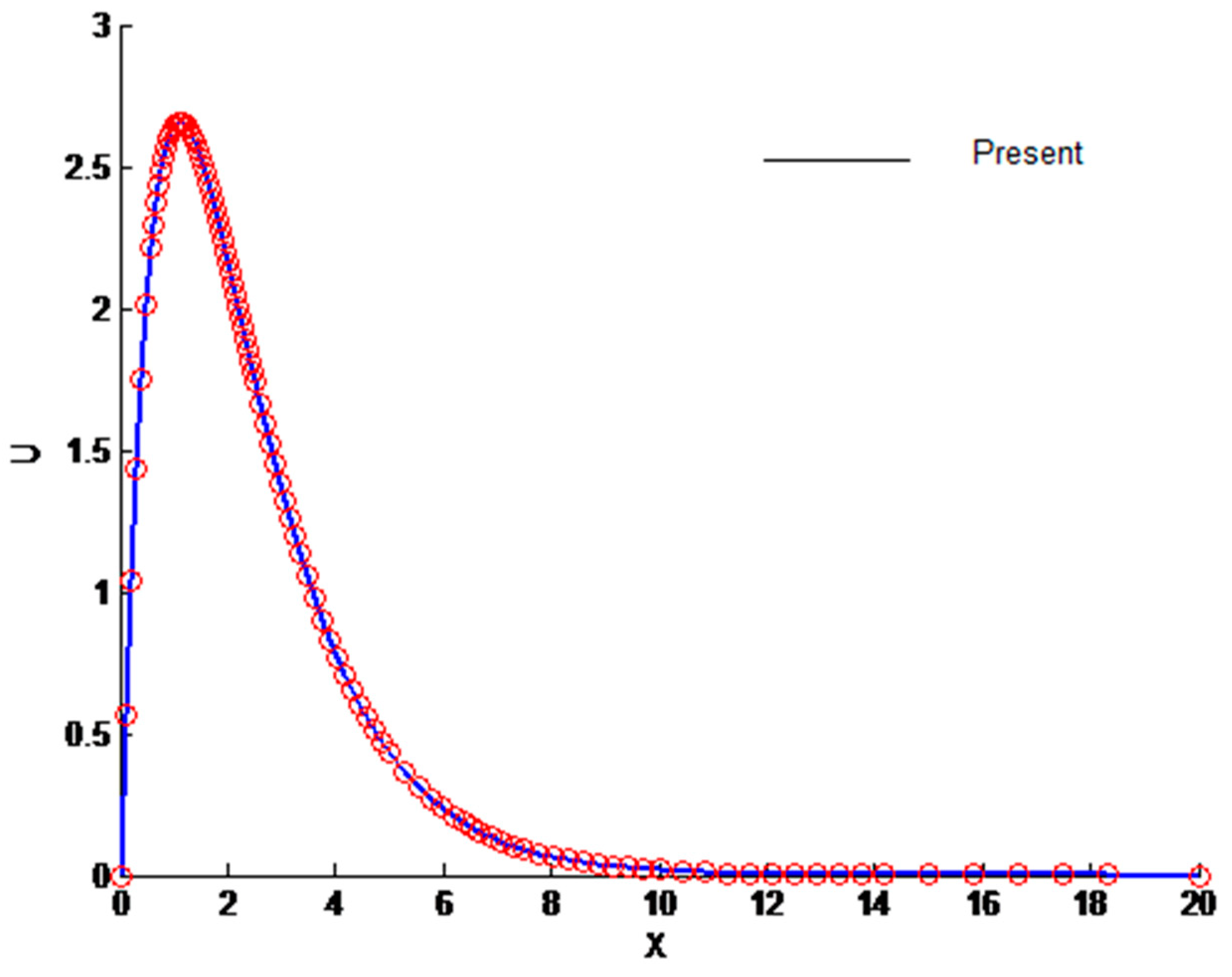 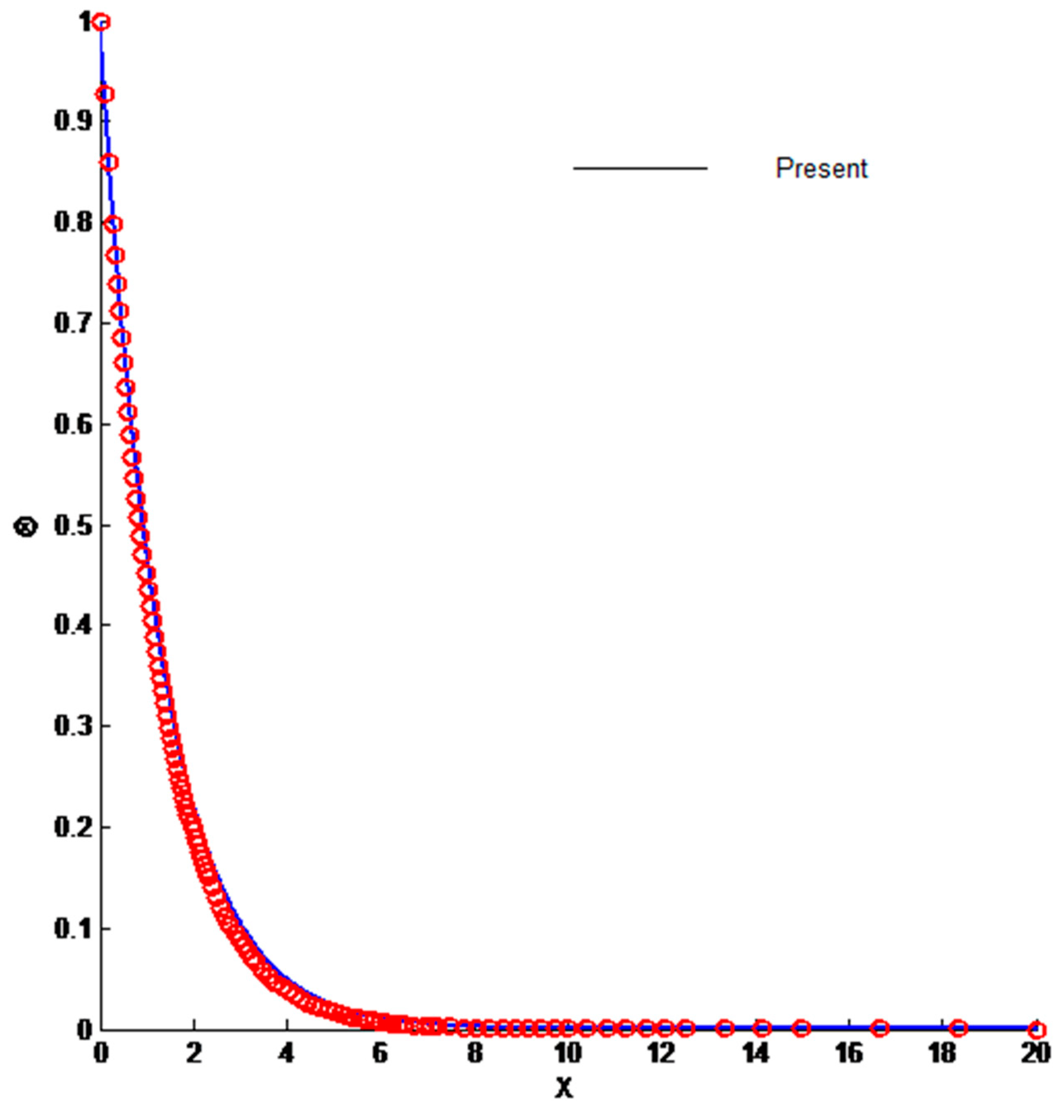 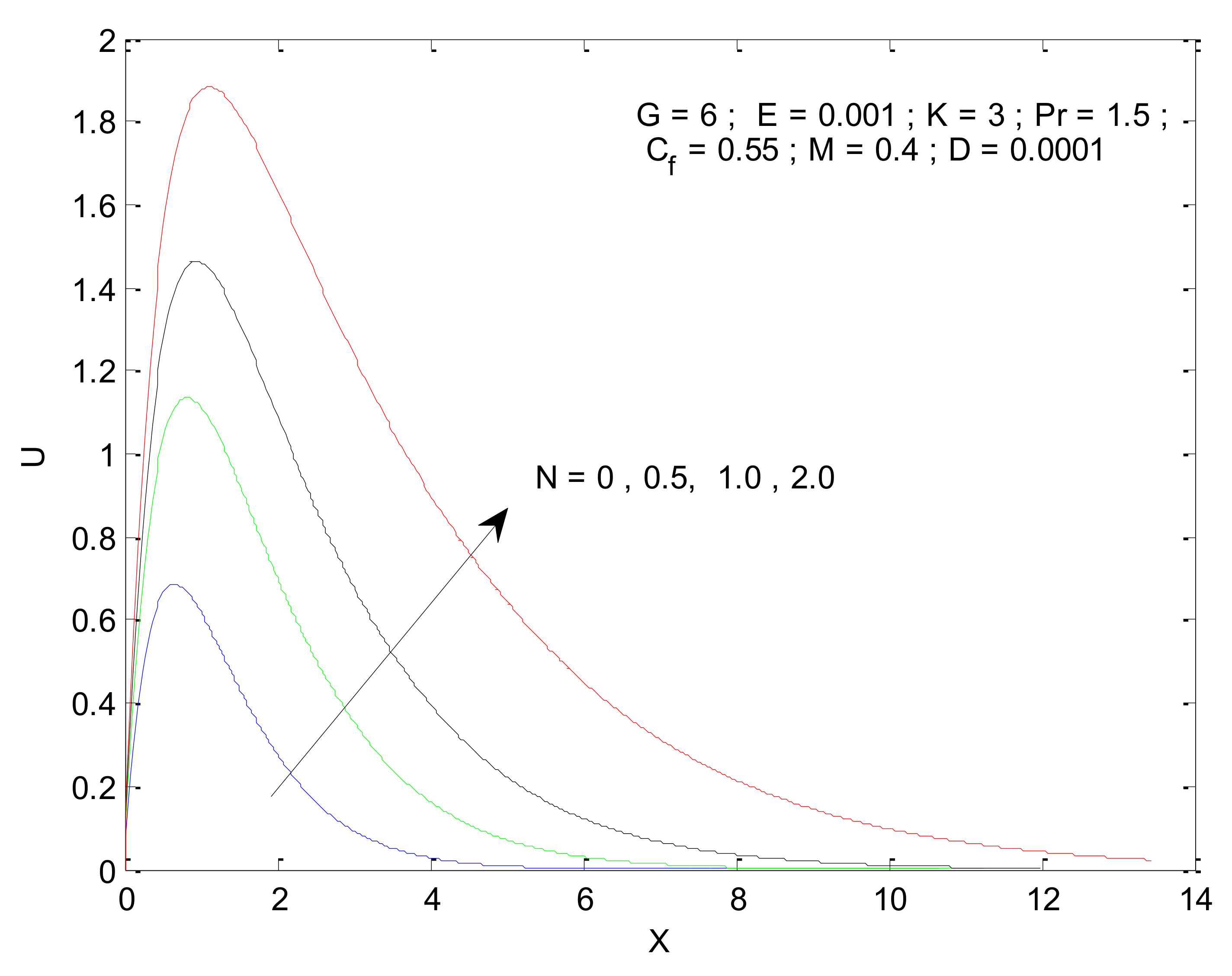 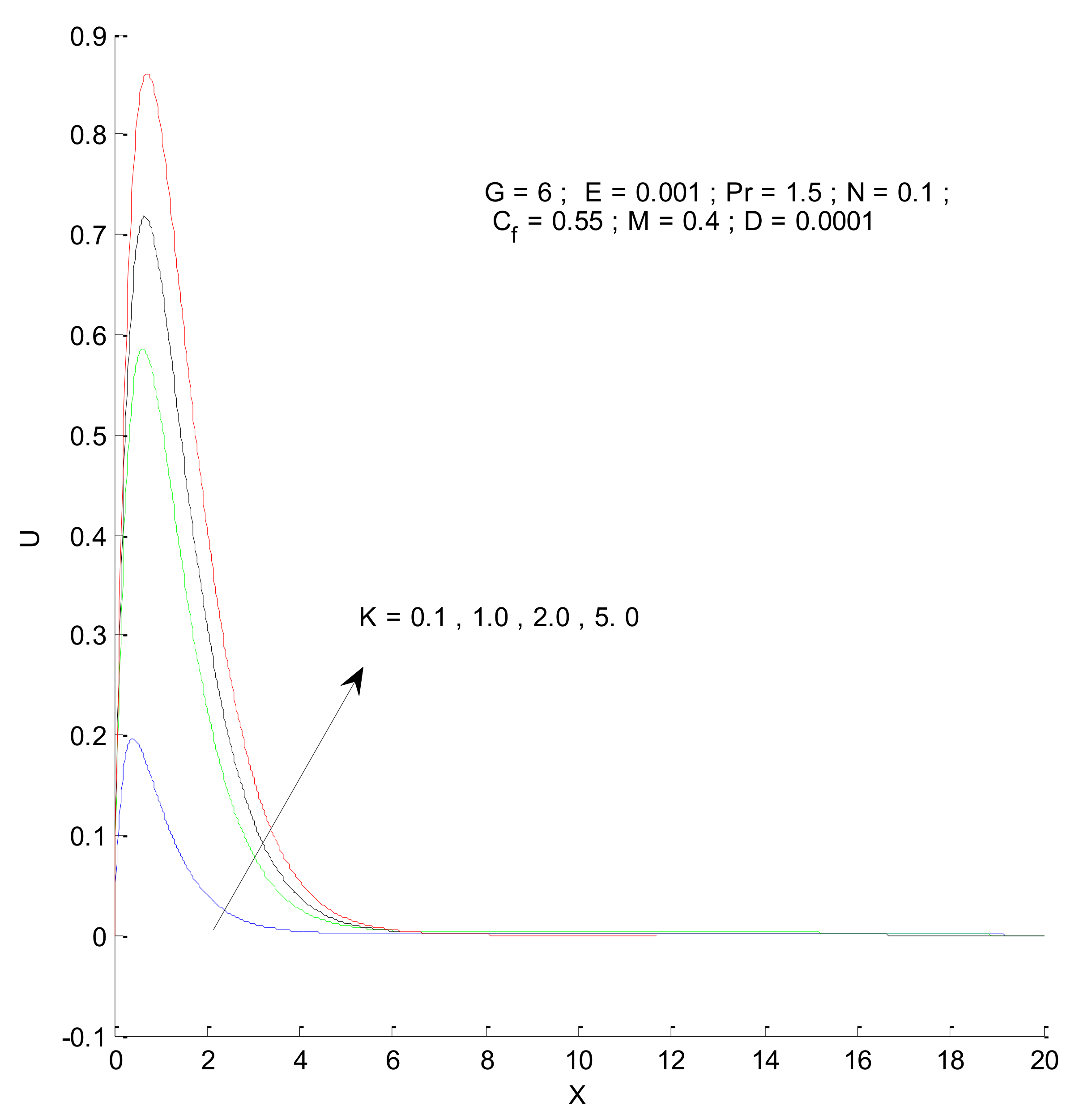 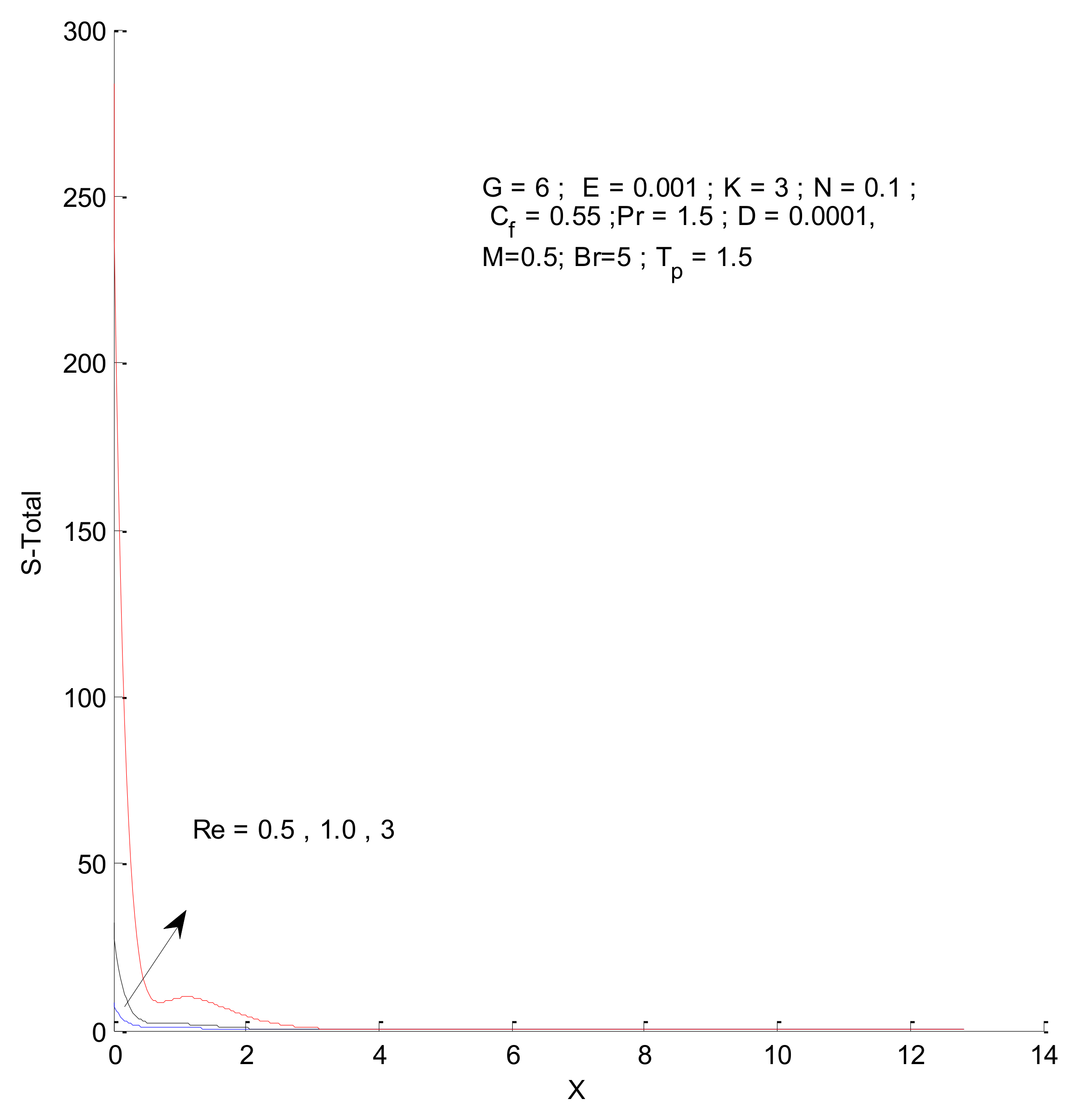 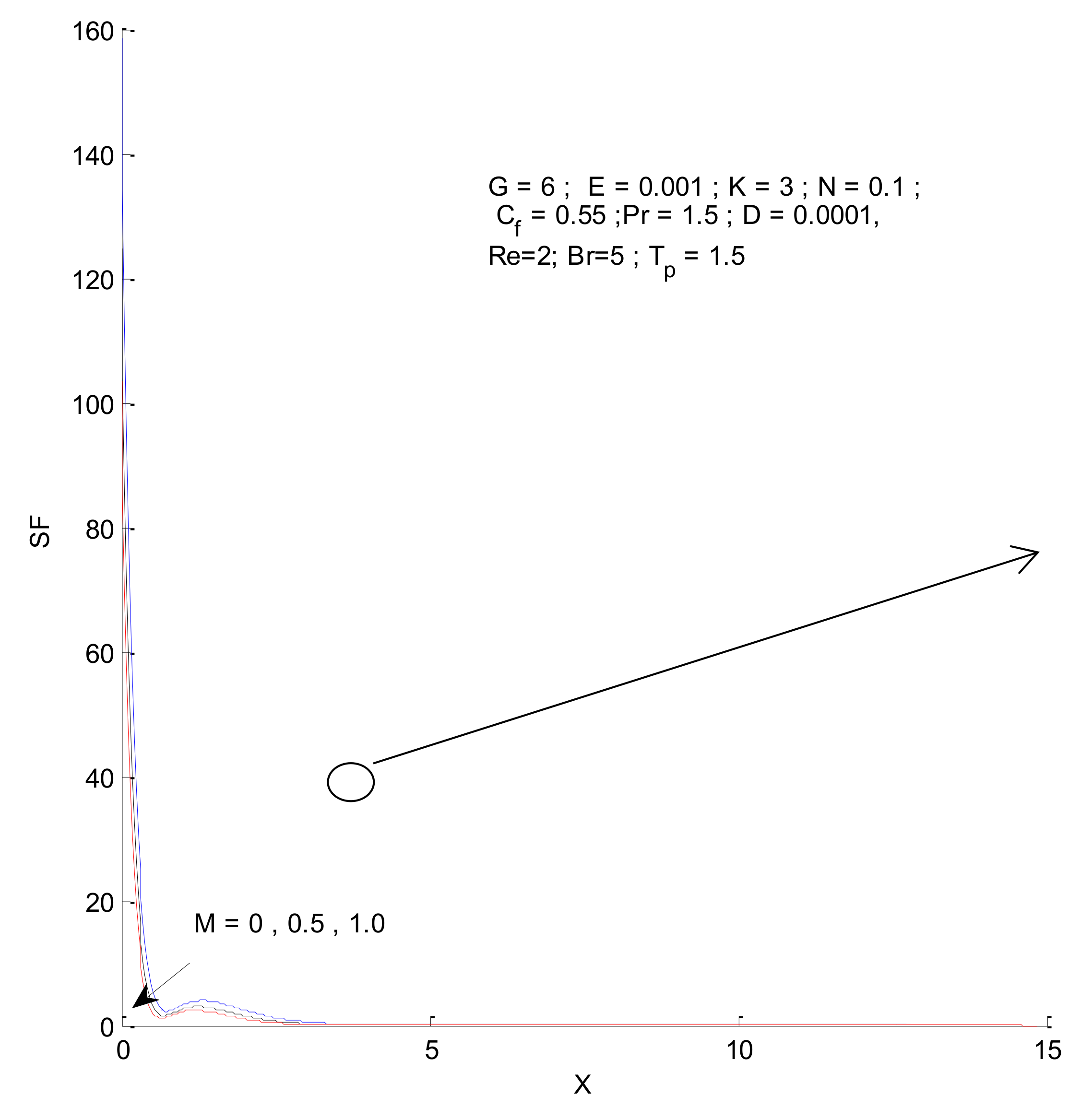 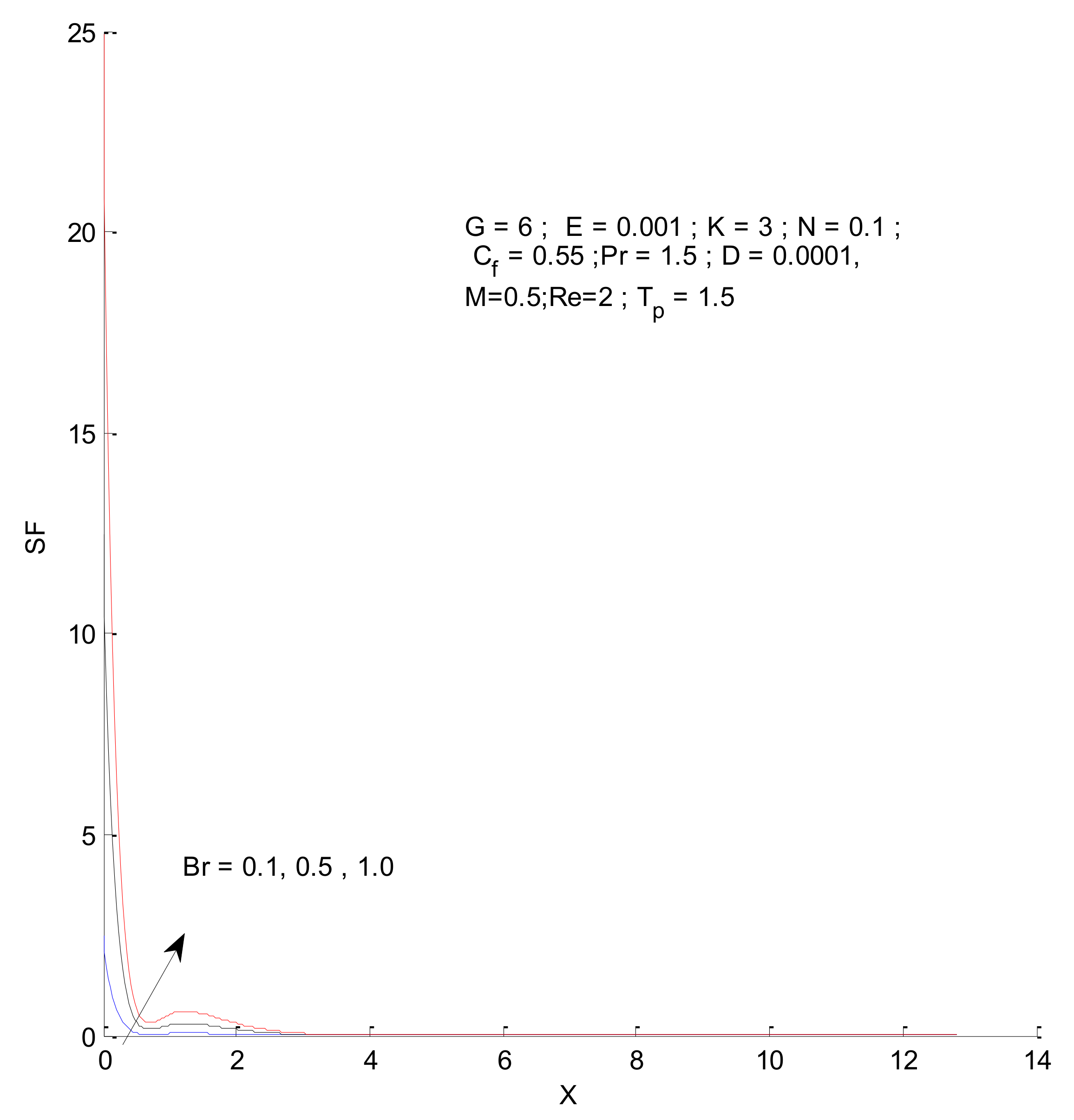 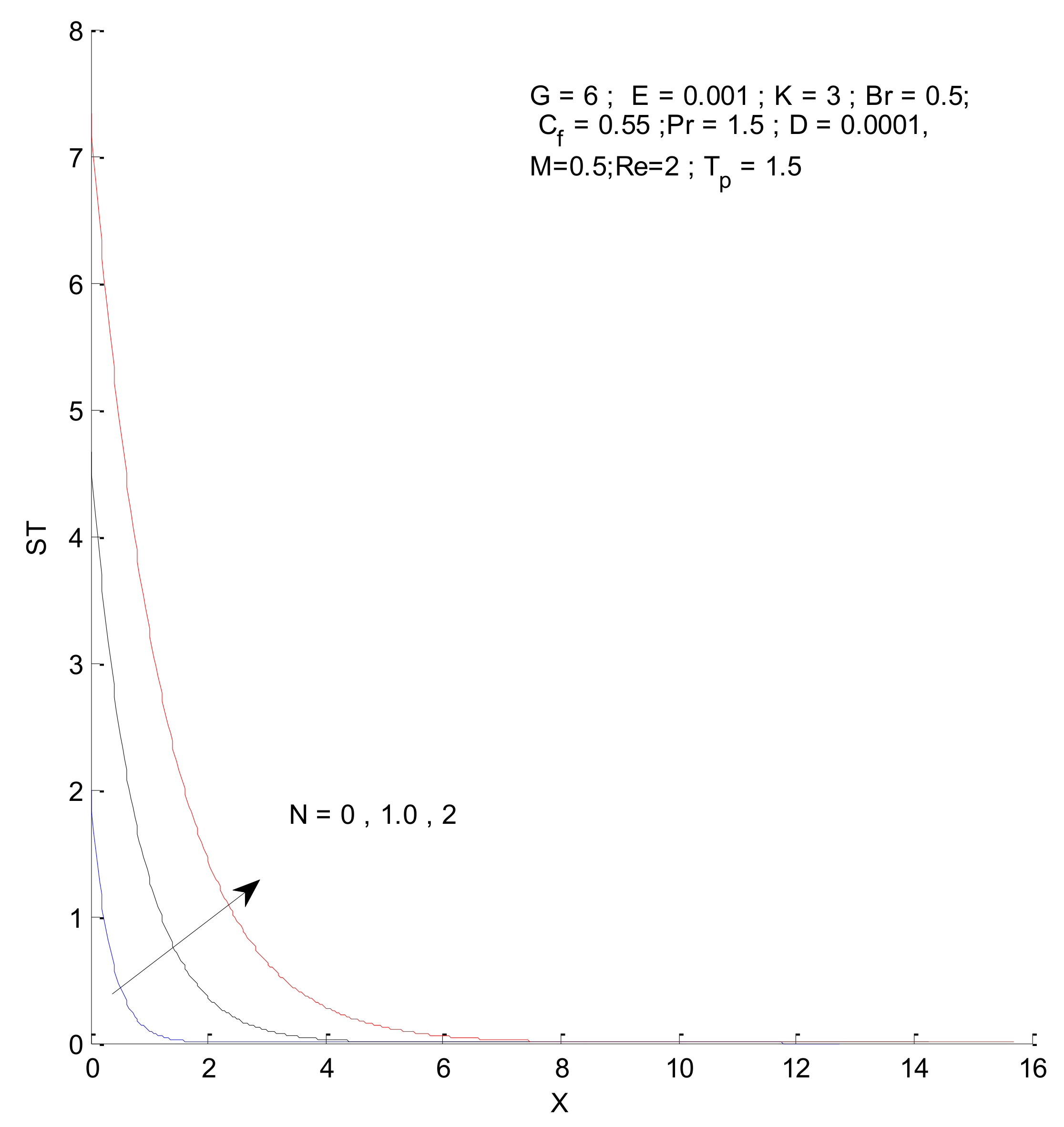 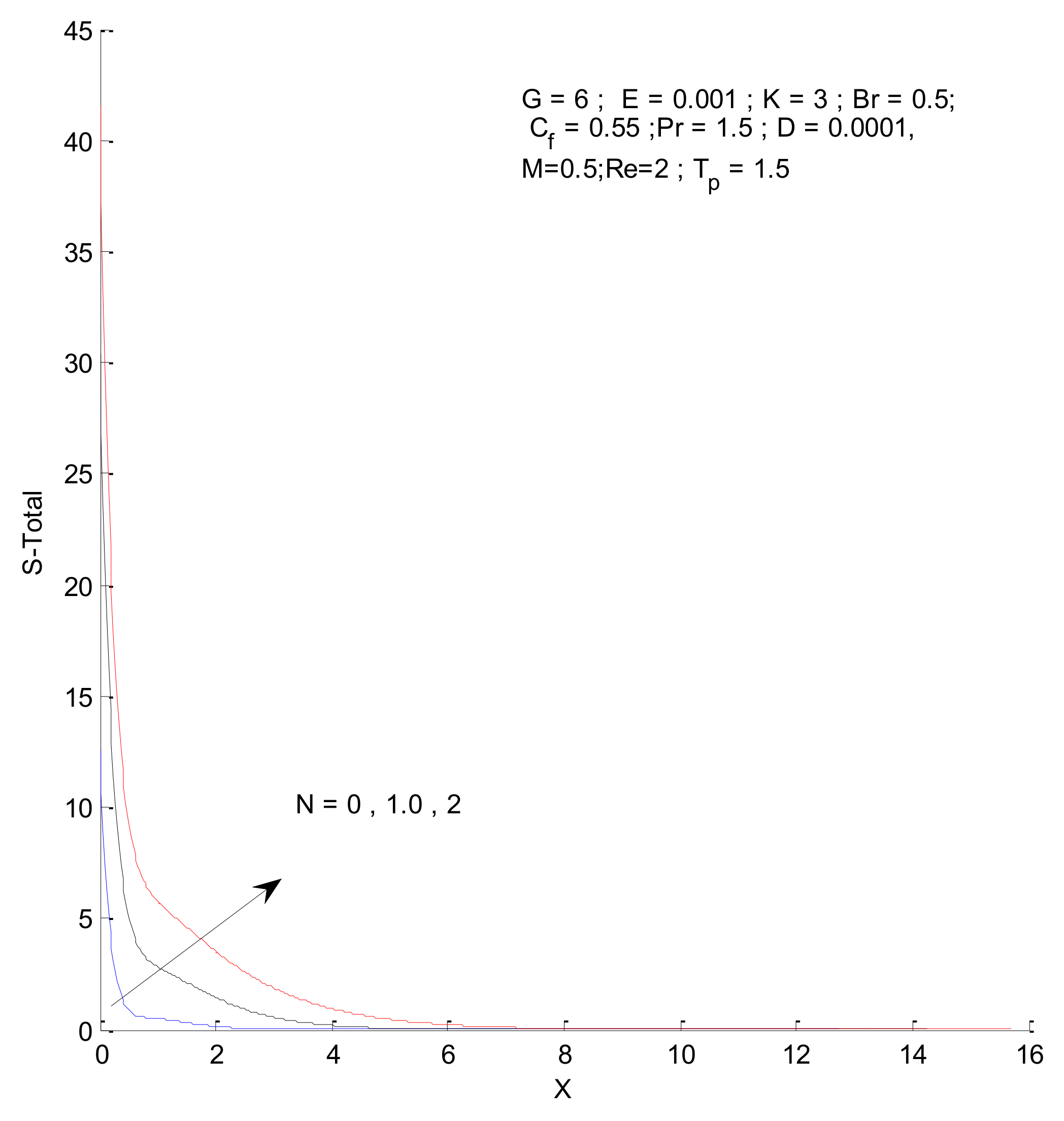