A Method for Confidence Intervals of High Quantiles

The memristor predicted by Chua is a two-port device [31]. It also has three significant features: the hysteresis loop passes the origin, the hysteresis loop is the shape of eight, and the area of the hysteresis curve decreases with increasing signal frequency. Here, we choose the cubic smooth memductance nonlinearity model [14,32]. The memristor model is described in the following form
According to the magnetic controlled three-terminal memristor model proposed in the memristive systems analysis [11], the following results are obtained
Here represent the input voltages, represent the output currents, donates an n-dimensional state variable of the system, are defined as continuous function, and is an n-dimensional continuous function. The memristor model in Equation (1) is appropriately deformed. By changing it to the model of single-port input and dual-port output, the model is transformed as where is the input voltage of the model, is the magnetic flux that controls the state of the model, represents the memductance, and are the two current outputs.
To verify the feature of the model Equation (3), we used Matlab for numerical simulation, as shown in Figure 1, The product of and is the input of this device with parameters , and in Figure 1a and Figure 1b. We found that the hysteresis curve does not converge to a single-valued function, but a multi-valued resistance with the frequency increasing, which means this model has a complex resistance value. The three-terminal memristor can be implemented by the circuit shown in Figure 2.
In Figure 2, are input voltages of the model, to multipliers, to resistors, a capacitor, and output currents, respectively. The analytical mathematical model is given as form the integrated circuit, and the remaining four resistors match the output coefficients. Using Multisim to simulate the model, input voltages are consistent with Matlab numerical simulation. The circuit simulation results received are shown in Figure 3.
It was found that the simulation results of the circuit model are consistent with the simulation of the mathematical model, so the model can be used to build the actual hardware circuit.

3. Modeling of Conservative Chaotic System Based on Three-Terminal Memristor

4. Equilibria and Their Stability of Three-Terminal Memristor Conservative System

The equilibria point plays an essential role in analyzing the system’s properties and we examined whether it meets the requirements of the conservative chaotic system. For a conservative system, only saddles and centers exist. There are no stable or unstable nodes and foci to exist in a conservative system. Equation (17) can be rewritten as
Setting the left of Equation (24) equal to 0, we can get three cases:
Case 1: , we can get . This case has three sub-cases as follows:
Case 1.1:
Case 1.2:
Case 1.3:
Case 2:
Case 3:
In Case 2, we derive , but parameters and the weight parameter , holds. Since , we have which contradicts the premise. Therefore, Case 2 does not hold. Case 3 has the same problem as Case 2. Therefore, from Case 1, the system has line equilibria , plane equilibria , and . The Jacobi matrix of the system is
By substituting into the characteristic equation, we find the eigenvalues of as
Hence, line equilibria are centers.
For the plane equilibrium , we find the eigenvalues as where where is the imaginary unit. If holds, must be centers from Equation (24). If , we can find out if , is a positive real number and the real parts of must be negative. If , is a negative real number and the real parts of must be positive. Therefore, if , must be saddles. Likewise, plane equilibrium has the same properties as . In sum, both and are either natural elliptic (centers) or saddles. Thus, from the perspective of these equilibria, the system fully meets the characteristics that the conservative system in phase space only has either saddle or center [17,18,19].

For system (19), take initial values , parameters , and sampling time s. Since , the outputs of the three-terminal memristor do not affect the system. According to the analysis of Equation (10), it produces periodic orbit, as shown in Figure 6a.
Now fixing and initial values as above, the orbits of different phase spaces are shown in Figure 6c,d. Therefore, the three-terminal-memristor-based conservative system produces chaos, which is called the three-terminal-memristor-based conservative chaotic system. The Poincaré map from Figure 6e with shows the orbits are chaotic and do not form a chaotic attractor. The chaotic attractor of a dissipative system has several little branches of hair-like Poincaré map because of the fractal dimension, but this memristor-based conservative chaos has a wide-banding Poincaré map that almost evenly fills the space initially occupied. This is because it has an integer dimension. The ergodicity of the memristor-based conservative chaotic system is much better than general dissipative chaotic systems, which is beneficial in chaos-based encryption.
The LEs in Figure 6b, indicating the sum of the LEs is zero. From Ref. [20], the Kaplan-Yorke Lyapunov dimension is
The integer result proves the conservativeness of the system. From Figure 6f, is constant, indicating this part is conservative; however, the total Hamiltonian of the system changes, which is caused by the non-conservative part . Thus, we confirmed the system is a typical non-Hamiltonian conservative chaotic system.
In this case, the maximum LE value, , is small, and the Poincaré map area is not large enough, although it fills evenly. Normally, in chaos-based encryption, the larger maximum LE value, the higher-order in pseudo-randomness of the chaos generator, the better in security, the more difficult to break. Besides, the larger area of Poincaré map, the more choices in the selection of pseudo-randomness. To enhance the maximum LE, many references took a trial-and-error method through bifurcation; we took a mechanism way in this paper. Provided that the frequency and energy of the system are increased, the positive Lyapunov exponent can be increased. Therefore, we adjusted the five initial values and four parameters according to their functions in frequency and energy. According to the 4D Euler equation, increasing can speed up the operating frequency of the system, and increasing the initial values can store the kinetic energy. The initial values also determine the spatial magnitude of orbits and the area of the Poincaré map. Initial values and , and sampling time s, were chosen to calculate Lyapunov exponents using the Wolf method [34]. As shown in Figure 6g,h, the maximum of the LEs . The maximum of the LEs is far greater than those of the most chaotic systems; it can be observed from the Poincaré map with that the space of the orbits is quite large, and the frequency is very high, which can be tested by frequency spectrum (the figure is omitted). Usually, the maximum LE cannot be adjusted too large through mechanical analysis. To increase the LE, the scaling time can be adjusted; however, this proposed memristor-based chaotic system can produce exceptionally large maximum LE through the adjustments of parameter and initial, which is based on the physical mechanism. The large LE and magnitude of Poincaré map are greatly helpful in chaos-based encryption.

We have analyzed the three-terminal memristor excitation of chaos, so how does Hamiltonian affect system dynamics? Fixing parameter , the initial value determines from Equation (29).
Choose the initial value with , with . The bifurcation diagrams are plotted by removing 80% of transients. Both initials correspond to the Hamiltonian . Figure 7a,b are the bifurcation diagrams based on the change of initials. The stripe colors represent Hamiltonian marked by the color bar. The low Hamiltonian energy (dark blue and blue) represents quasiperiodic orbits, and the high Hamiltonian energy (light blue, yellow, and red) represents chaos.
Figure 7c is the zoom of Figure 7b within . There are some bifurcations, for instance, when and , the system produces chaotic orbits, as shown in Figure 7d,f. However, it also generates the periodic orbits, period-2 orbits, and quasiperiodic orbits with , as shown in Figure 7e.

5.3. Dynamical Analysis with Fixed and Varied

Although the non-conservative part changes with time at the rate of Equation (22), in Section 5.1 and Section 5.2, the initial value of is crucial. When it is set to zero, the influence of three-terminal memristor variable is reduced as much as possible from Equation (23). In this section, the four initial values corresponding to the conservative part being fixed, we analyze how the initial value corresponding to the effects of the system. Fix the initial values with and with , and
The low energy determines that the system generates quasiperiodic orbits [Figure 8a] and the high energy makes chaos [Figure 8c], which corresponds to the results given in Section 5.1 and Section 5.2. Regardless of the value of conservative Hamiltonian , promotes the chaotic degree of the system within a range. Beyond this range, it suppresses the system’s dynamics and transits from chaotic motion to quasiperiodic motion. As the Hamiltonian level increases, the range becomes wider, as shown in Figure 8b,d.

There are three methods for the simulation of nonlinear systems: chaotic system simulation circuit, FPGA (Field Programmable Gate Array), and computer numerical simulation. For the most dissipative systems, the required accuracy is not high, so all three simulation methods can be implemented. However, for conservative systems, the required accuracy is very high, especially FPGA and numerical simulation. Even if the accuracy is high, there still are problems such as algorithms, sampling, discretization, and the number of bits of computer operations causing errors. The conservative system divergence is zero, so a little bit of error will make the divergence either larger than zero leading to instability, or less than zero leading to shrinking. Both situations cause the conservative chaotic phase diagram to disappear. The hardware implementation is challenging. Therefore, for conservative systems, analog circuit simulation is indispensable because it is a real analog simulation.
As shown in Figure 9, the system is implemented by an analog electronic circuit without scale transformation. A total of 10 analog multipliers accomplish seven quadratic terms and two cubic terms in the system. Besides, there are five integrators and four inverters, which are composed of some capacitors and resistors. The three-terminal memristor is constructed at the bottom of Figure 9.
Selecting the initial values and parameters , the phase portraits of numerical simulation are shown in Figure 10a,b. In the analog circuit, the chips have a slight voltage deviation that corresponds to a small initial value, so there is no need to add the initial voltage between the capacitor’s two pins.
Figure 11a,b showing different phase diagrams are consistent with the results of a numerical simulation showing in Figure 10a,b. It is verified that the proposed system produces conservative chaos.

This work was funded by the National Natural Science Foundation of China (61873186). 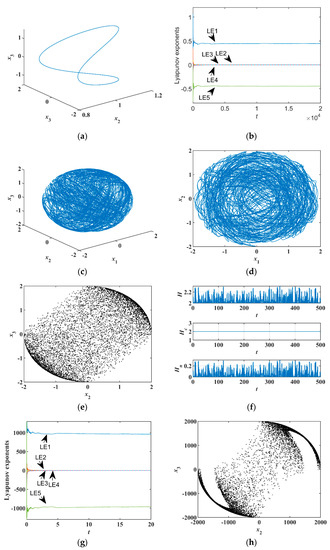 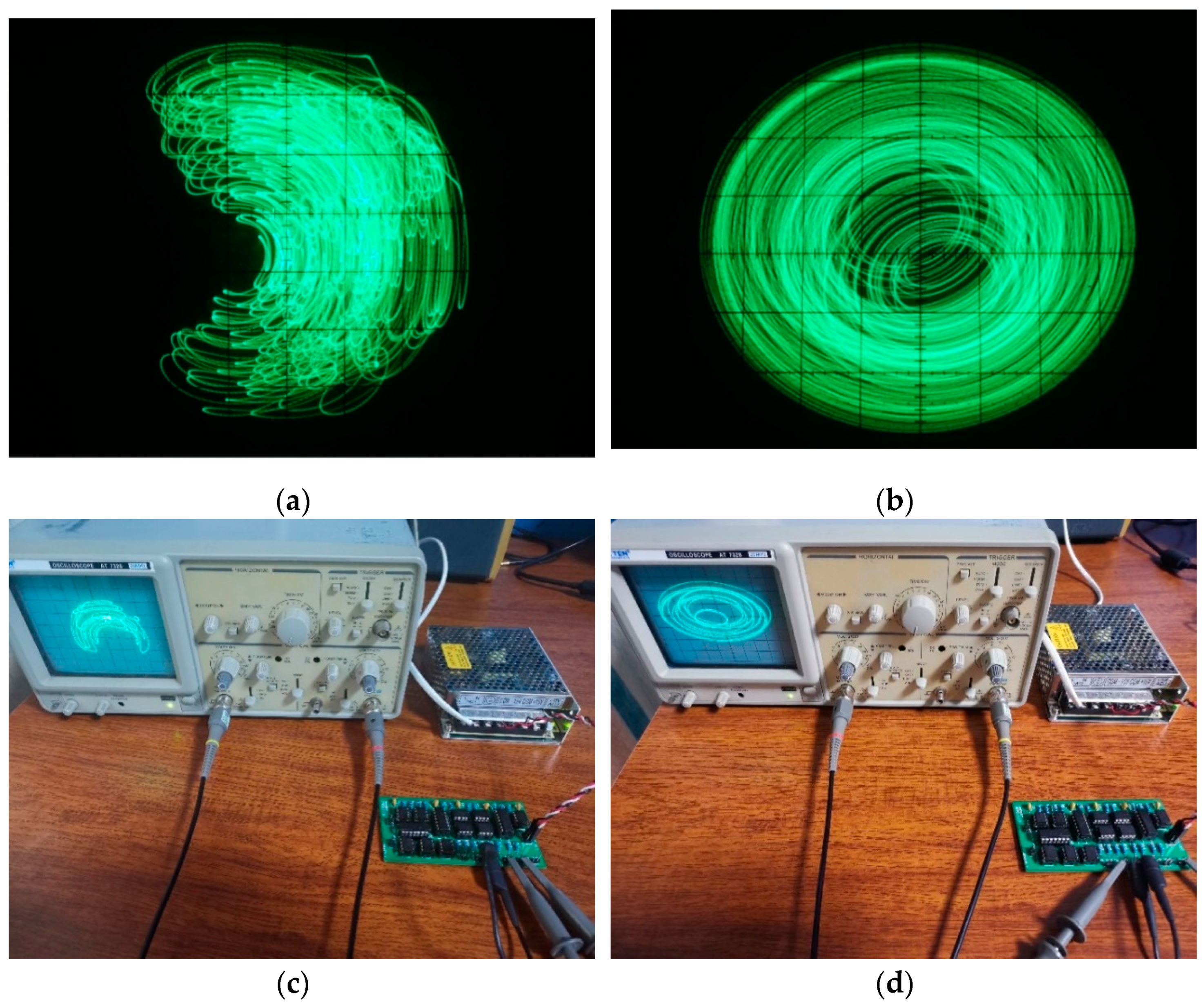