A Dual Measure of Uncertainty: The Deng Extropy
Previous Article in Special Issue

It has been reported that major earthquakes are preceded by Seismic Electric Signals (SES). Observations show that in the natural time analysis of an earthquake (EQ) catalog, an SES activity starts when the fluctuations of the order parameter of seismicity exhibit a minimum. Fifteen distinct minima—observed simultaneously at two different natural time scales and deeper than a certain threshold—are found on analyzing the seismicity of Japan from 1 January 1984 to 11 March 2011 (the time of the M9 Tohoku EQ occurrence) 1 to 3 months before large EQs. Six (out of 15) of these minima preceded all shallow EQs of magnitude 7.6 or larger, while nine are followed by smaller EQs. The latter false positives can be excluded by a proper procedure (J. Geophys. Res. Space Physics 2014, 119, 9192–9206) that considers aspects of EQ networks based on similar activity patterns. These results are studied here by means of the receiver operating characteristics (ROC) technique by focusing on the area under the ROC curve (AUC). If this area, which is currently considered an effective way to summarize the overall diagnostic accuracy of a test, has the value 1, it corresponds to a perfectly accurate test. Here, we find that the AUC is around 0.95 which is evaluated as outstanding. View Full-Text
Keywords: natural time analysis; order parameter of seismicity; entropy change under time reversal; entropy; ROC natural time analysis; order parameter of seismicity; entropy change under time reversal; entropy; ROC
►▼ Show Figures 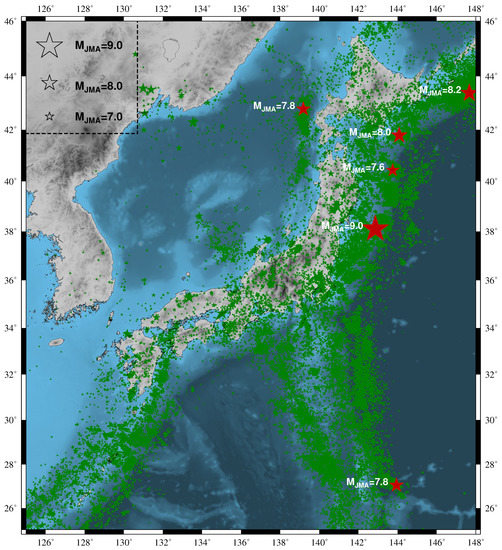