The harmful pollutant emissions significantly increase over the last years in industry, marine and other energy sectors [1]. Such an increase has many negative impacts on human health as well as on the marine environment [2].
In the last years, liquefied natural gas (LNG) is recognized by many scientists and experts as a good alternative to conventional fuels due to many reasons. On one side, from the pollution point of view, the combustion of LNG removes sulfur oxides (SOX) and particulate matter (PM) emissions almost completely, while at the same time carbon dioxide (CO2) and nitrogen oxides (NOX) can be significantly reduced [3,4]. On the other side, due to its low temperature (around −162 °C), LNG can be used as a heat sink in many power plants or industry processes [5,6,7] or its cold energy can be utilized in other applications [8]. Therefore, the usage of LNG can be beneficial in several different ways.
In the marine sector, most LNG carriers use boil-off gas (BOG) from the cargo tanks for its propulsion [9]. The domination of steam propulsion systems, which are traditionally applied on the LNG carriers [10,11] is nowadays highly influenced by dual-fuel diesel engines (DFDE) [12,13] and its possible upgrades [14]. Such dual-fuel diesel engines require a compressor unit which delivers LNG vapors from the cargo tanks to the engine.
It is very rare to find in the literature efficiency evaluation of this kind of compressor. The most scientific literature which deals with simulation and modeling of LNG systems is taking LNG (or other gas or vapor) compressor efficiency on presumptions according to the manufacturer specifications. A literature overview of several compressors is presented in Table 1, however, the type of each compressor is not known.
In some researches which deals with the LNG vapor compression, the authors clearly notify the type of compressor. As for an example, Reddy et al. [20] investigate reciprocating compressors from the LNG terminals and concluded that such compressors are notable energy consumers, which require proper optimization techniques, while Park et al. [21] analyzed dual-opposed linear compressor used in LNG (re)liquefaction process and its optimal compressor operating regimes.
In other researches, the authors investigate entire processes with LNG vapors, therefore, exact compressor types are not mentioned. As for an example, overall compression power reduction and exergy loss analysis for a cascade LNG process presented Nawaz et al. [22] where the authors found possibilities for minimization of the entire process exergy losses. Investigation of the LNG fuel gas supply system, where the compressors are used for various purposes, presented Park et al. [23]. Also in this research, the authors made several variations of the entire LNG fuel gas supply system, but the BOG compressor (or more of them) type is not presented.
The investigated DFDE LNG carrier has an electricity generating set which consists of four identical engine units. Each unit is designed to develop a total power of 7800 kW. Engines may consume diesel oil, heavy fuel oil, and LNG. LNG consuming requires pilot diesel oil burning to initiate the combustion process in LNG operation mode [24,25]. Gasified LNG is taken from the cargo tanks to the inlet of the two-stage compressor unit and delivered to the engines for completion and continuation of the combustion process [25,26]. As mentioned before, the burning of natural gas in the engines is a useful concept for reducing NOX emissions according to Marpol Annex VI Tier 1 to Tier 3 requirements [27,28] but also it is accommodating request of maintaining cargo tank pressure in the required range, which is up to 25 kPa [29], although independent tanks class B may withstand pressures as high as 70 kPa [30]. As exploitation characteristics of this type of compressor, especially during on-board performance are rarely investigated, this paper will cover energy and exergy analysis of two-stage LNG compressor in real working conditions to better understand the power losses. Measurements were taken from the minimum flow request of the compressor, which is set from the manufacturer specifications. The engine load was gradually increased until the point of normal continuous rating at main propulsion shafts, which equals 56 rpm at each propulsion shaft.

2. Description and Characteristics of the Analyzed Two-Stage Compressor

Sea trial tests were carried out at different main propulsion shaft rotation speed. The test commenced at the lowest load of the two-stage compressor, where the compressor is delivering all gas to the generator engines, which is at about 46 rpm at the main propulsion shafts. Measuring results (Table 4 and Table 5) were obtained with ship’s standard measuring equipment [34,35,36] for various readings which include pressure, temperature and mass flow rate of LNG vapor at compressor first stage inlet, first stage outlet and second stage outlet. Before commencing the sea trial test, it was required to run diesel generators on the low sulfur diesel oil which is not the preferred option for the charterer due to fuel cost. Once when cooling down temperature is achieved, two-stage compressor received permission to start at higher motor speed. Change over process from diesel oil combustion to gas combustion was carried out according to the producer pre-set sequence. Fuel oil consumption measuring results were carried out during the parallel operation of three and four generators online.
Equipment for electrical readings of voltage, ampere, and power factor is described in [37], and an overview of propulsion shaft revolutions measurements can be found in the literature [38,39]. Measured results are given in Table 5. The power factor of the compressor electromotor varied only for negligible values throughout all measured range at the high voltage control and measuring breaker. Voltage is not changeable in the power control process and is coming from the common ship’s power network, which is 6600 V for this type of vessel. Power network is supplied from four diesel generator units which have the same power output of 7800 kW. For the maneuvering purposes, it is required to have two units to run in parallel, although the power consumption may withstand one unit until dead slow ahead and dead slow astern operation is required. This option is preferred due to safety reasons. Although set voltage should be 6600 V it may be seen from Table 5 that shipyard increased set point for about 2% during the sea trials. The high outlet pressure from the second stage compressor outlet is required due to pressure drops in the gas line to the engines in order to satisfy the engine gas pressure request of 580 kPa. Increasing power at the compressor’s electromotor is achieved by increasing amperage with variable frequency drive [40,41,42]. Measured results with compressor load variations are given in Table 5.
Loaded LNG content (molar ratio) is [43]: CH4 (0.9494), C2H6 (0.0475), C3H8 (0.0017), i-C4H10 (0.0001), n-C4H10 (0.0001), N2 (0.0012).

6. Variation and Optimization of Temperature at the Compressor’s Second Stage Inlet 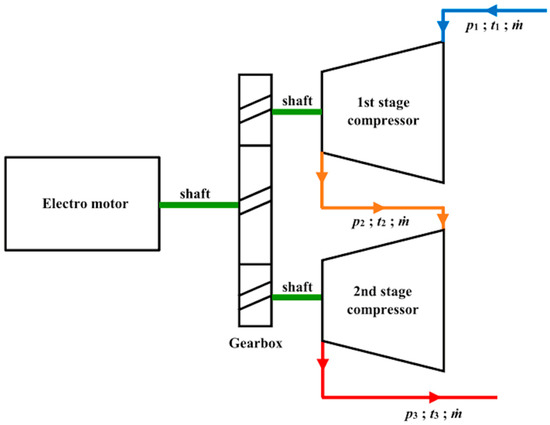 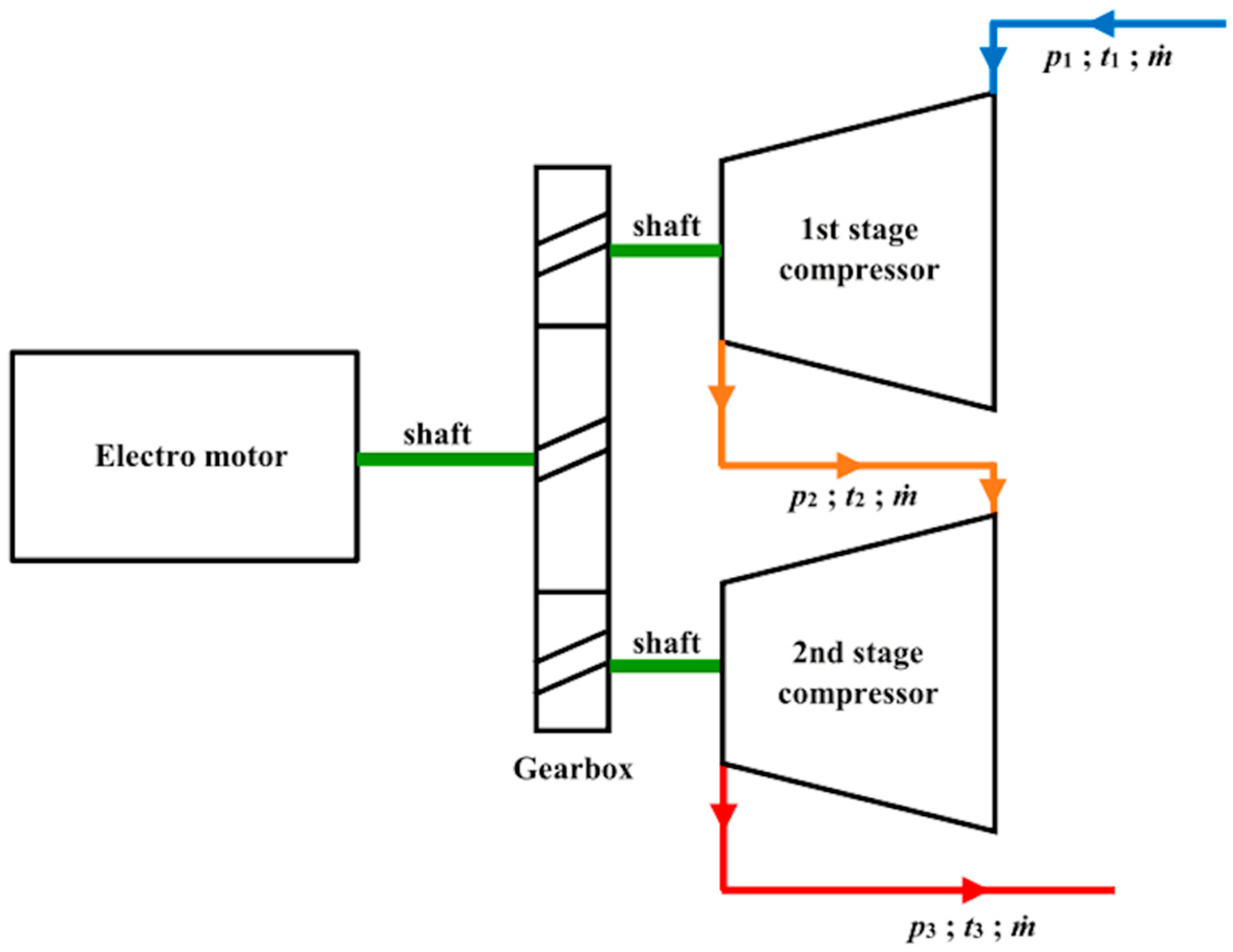 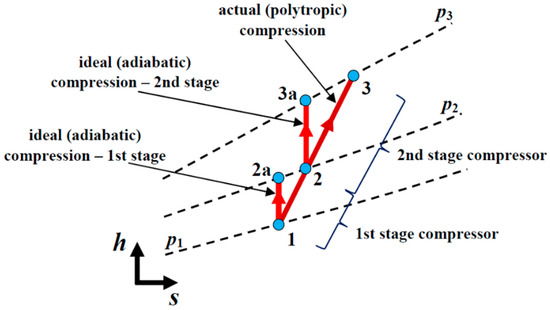 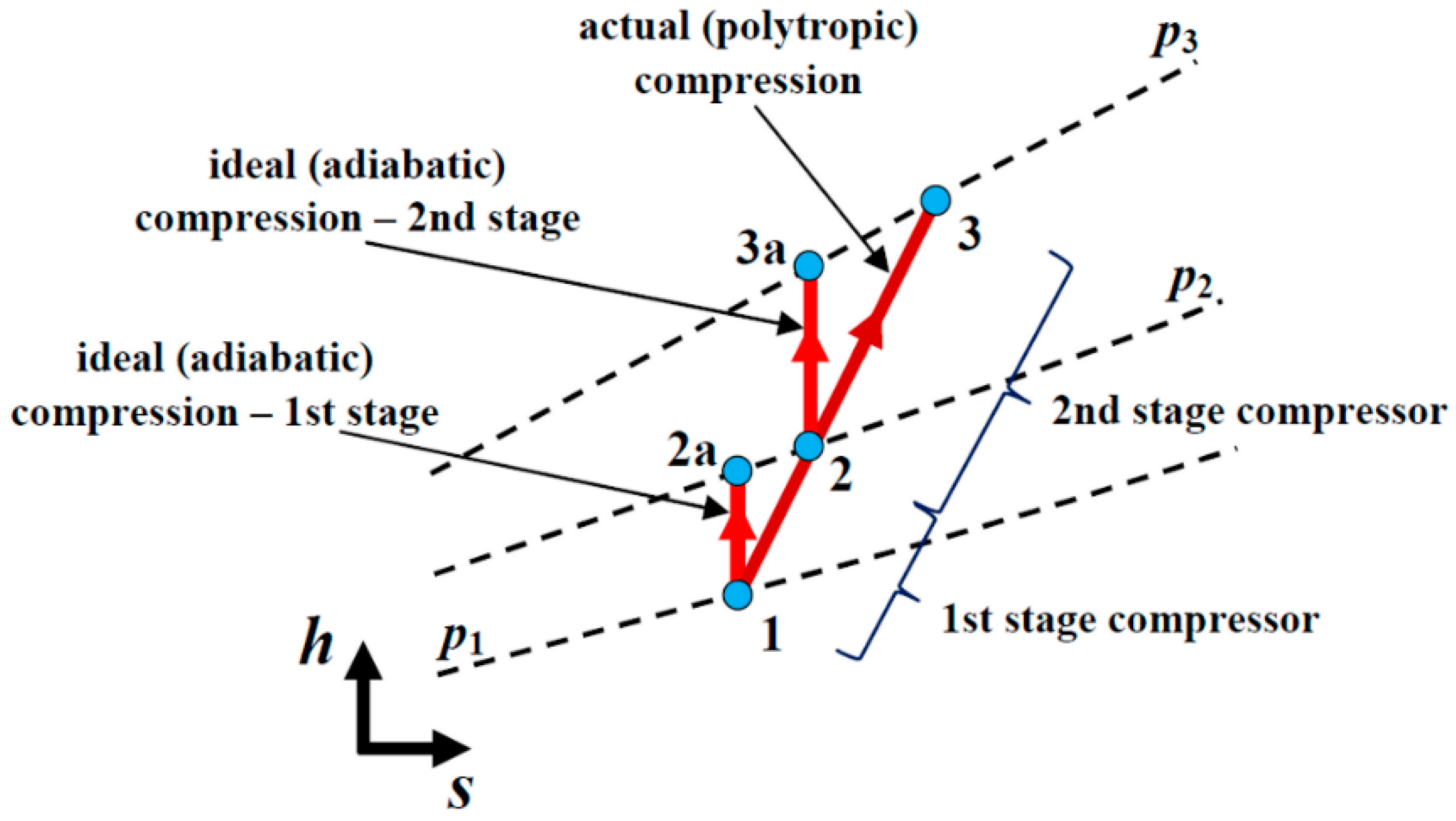 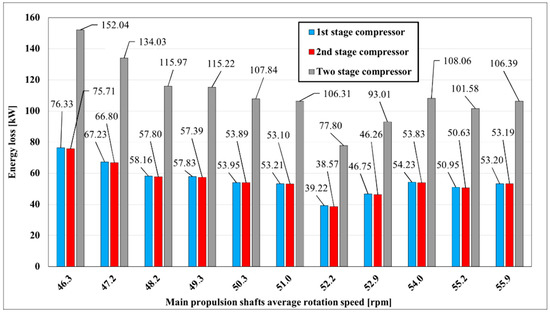 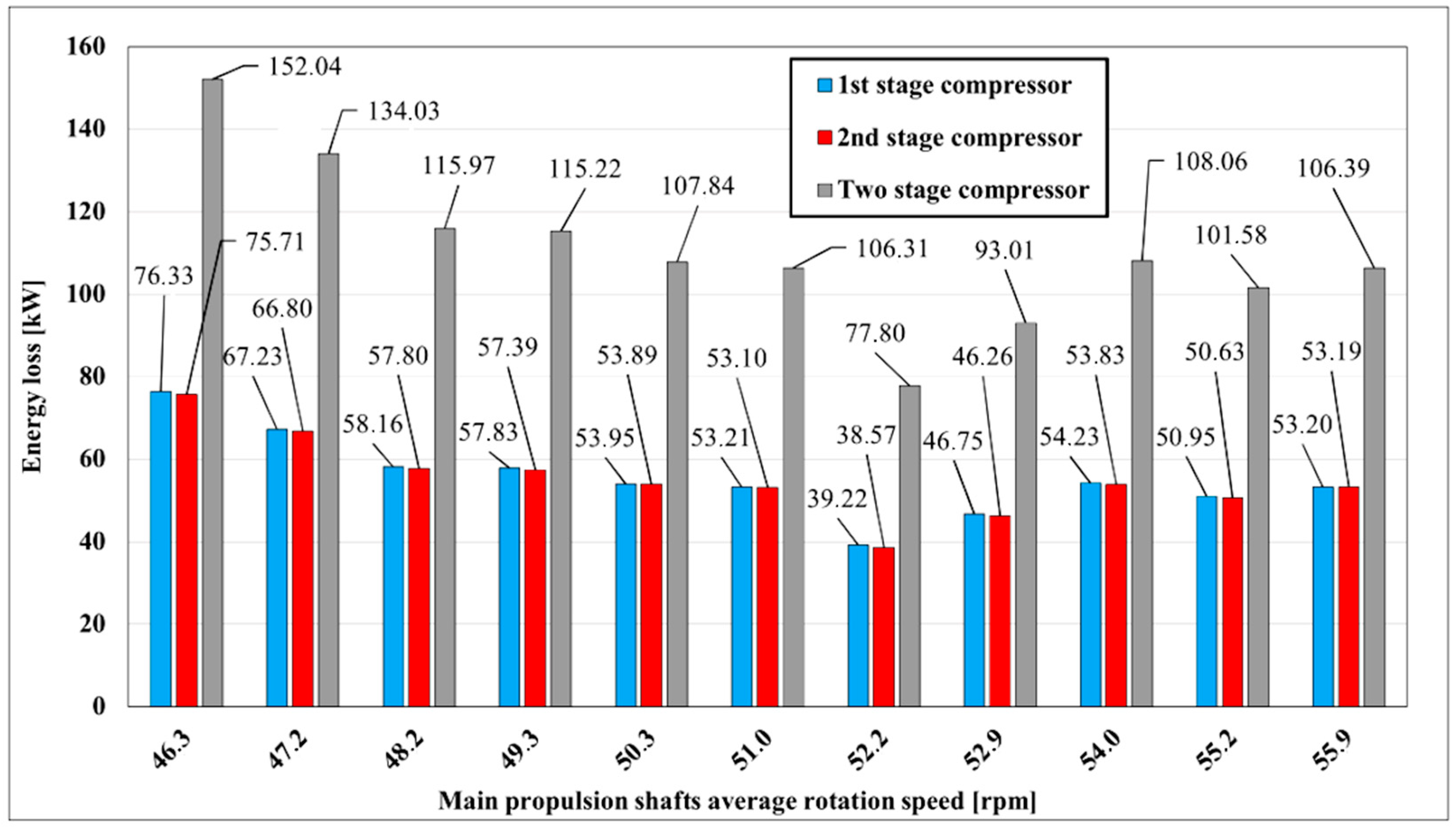 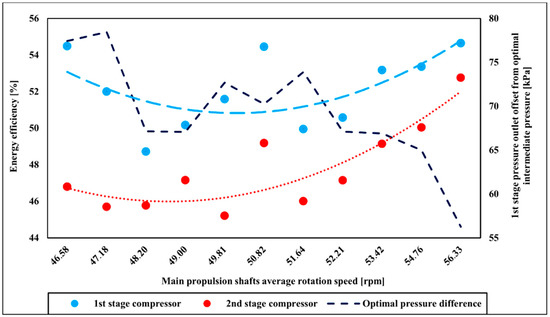 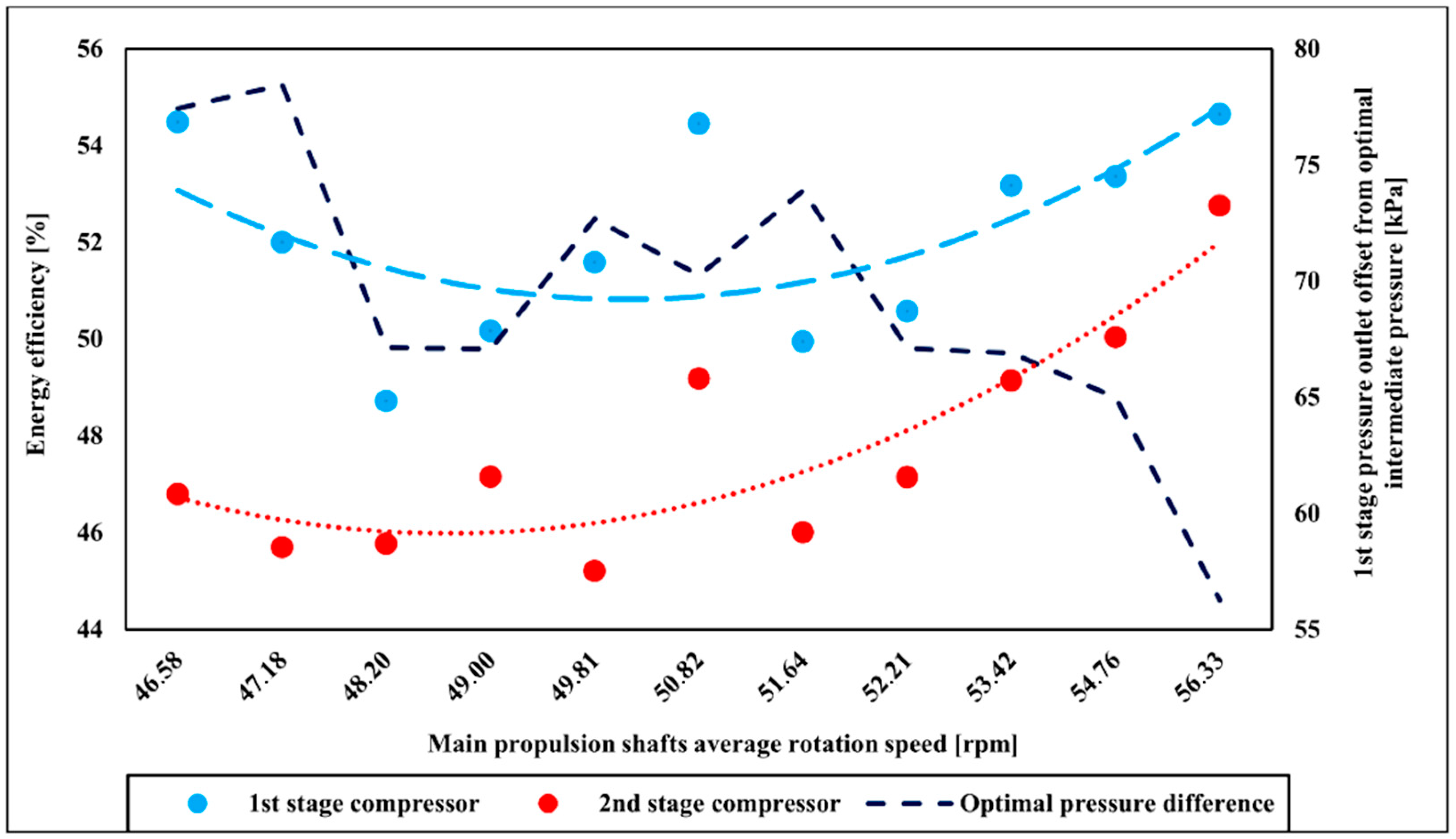 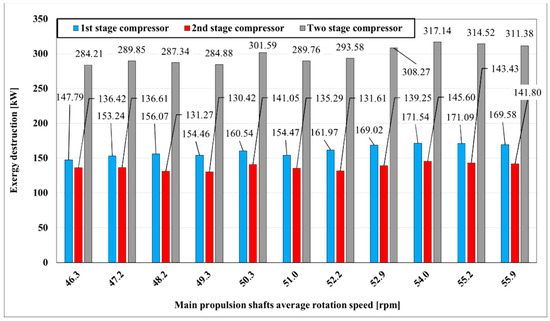 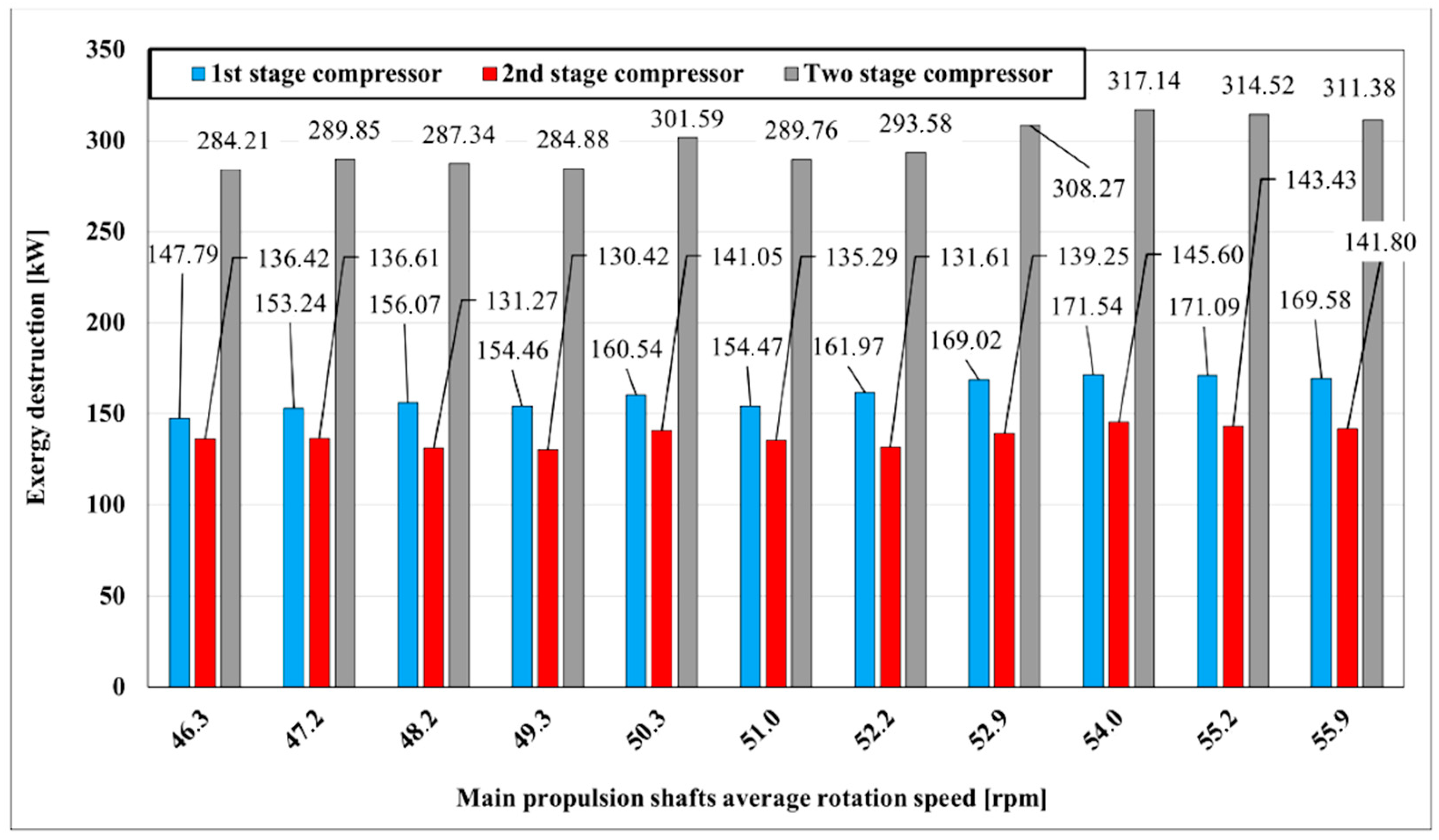 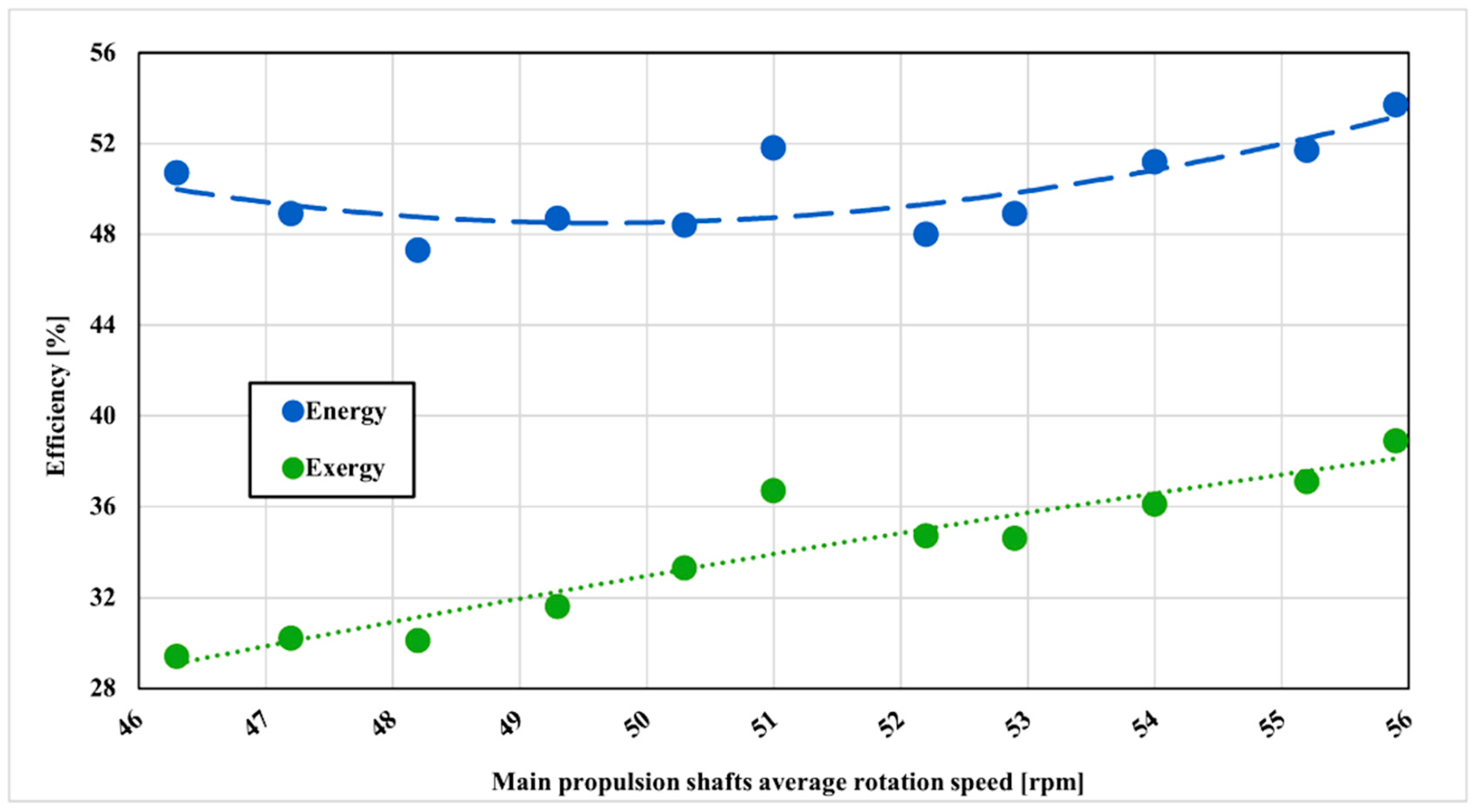 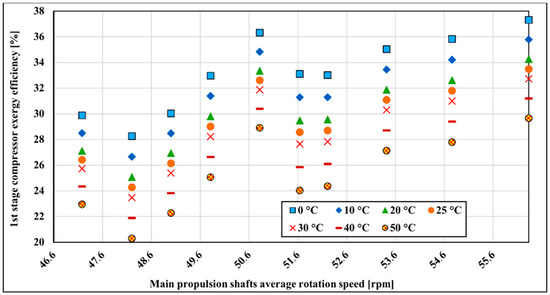 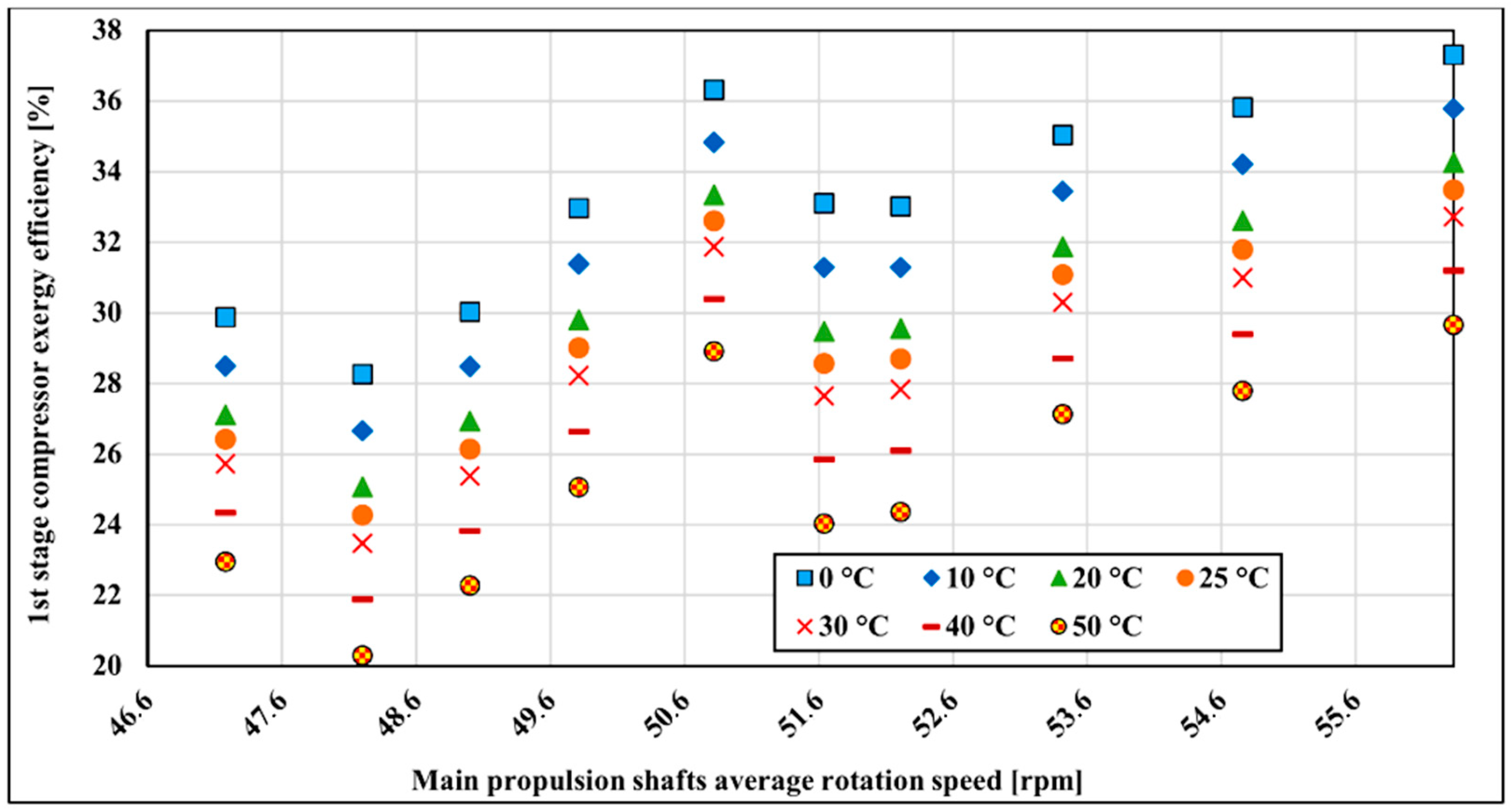 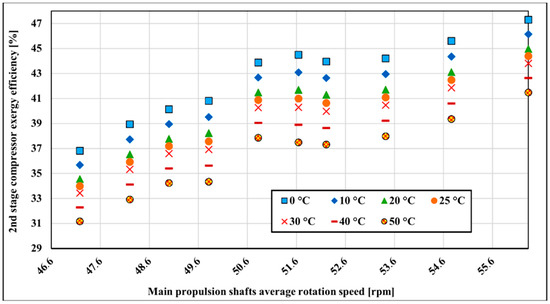 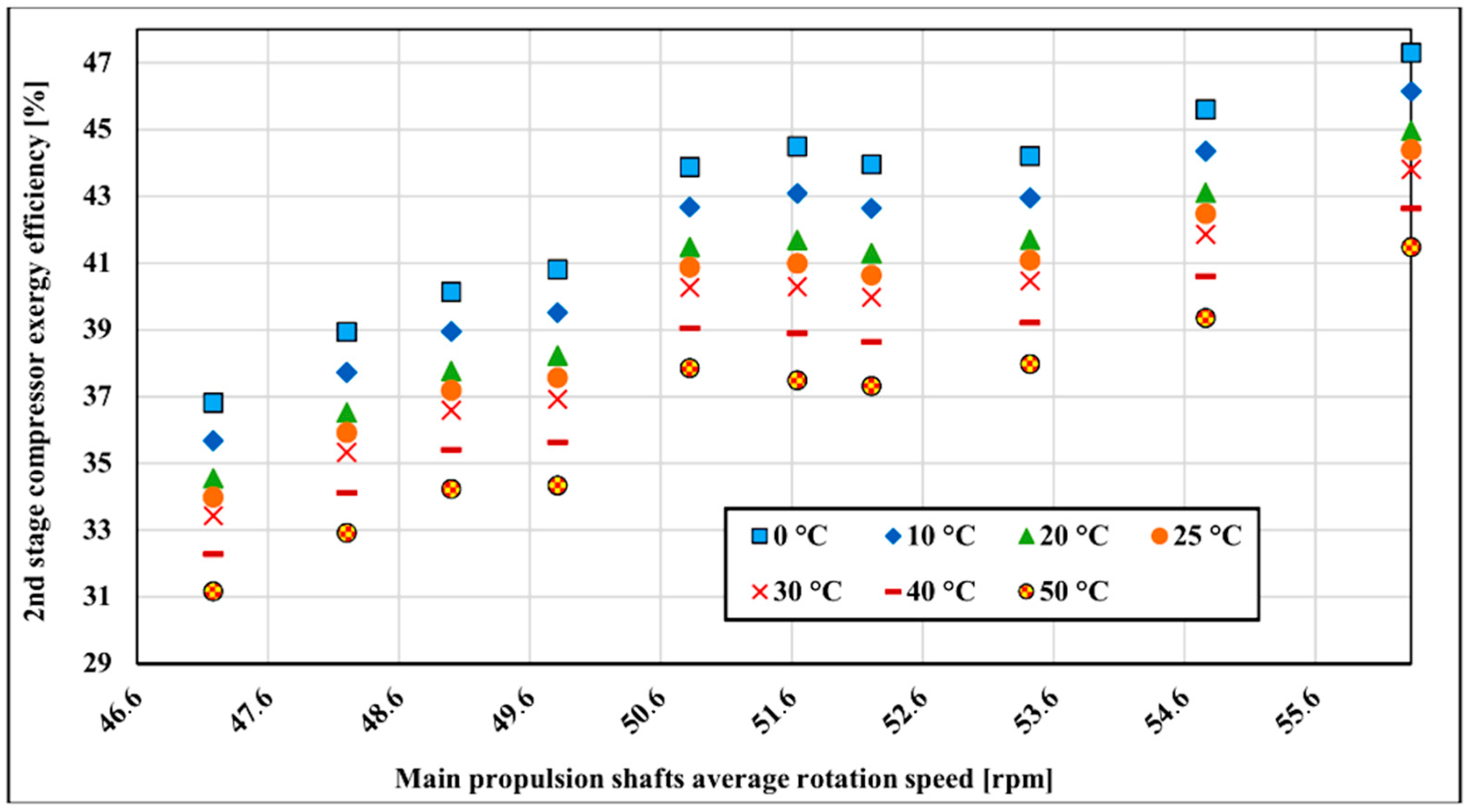 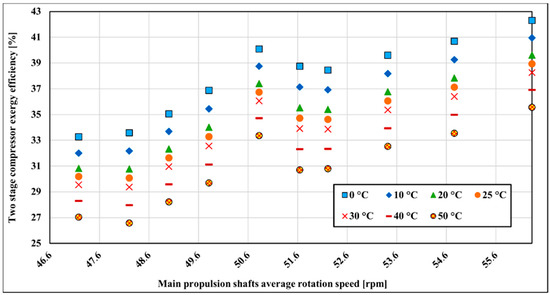 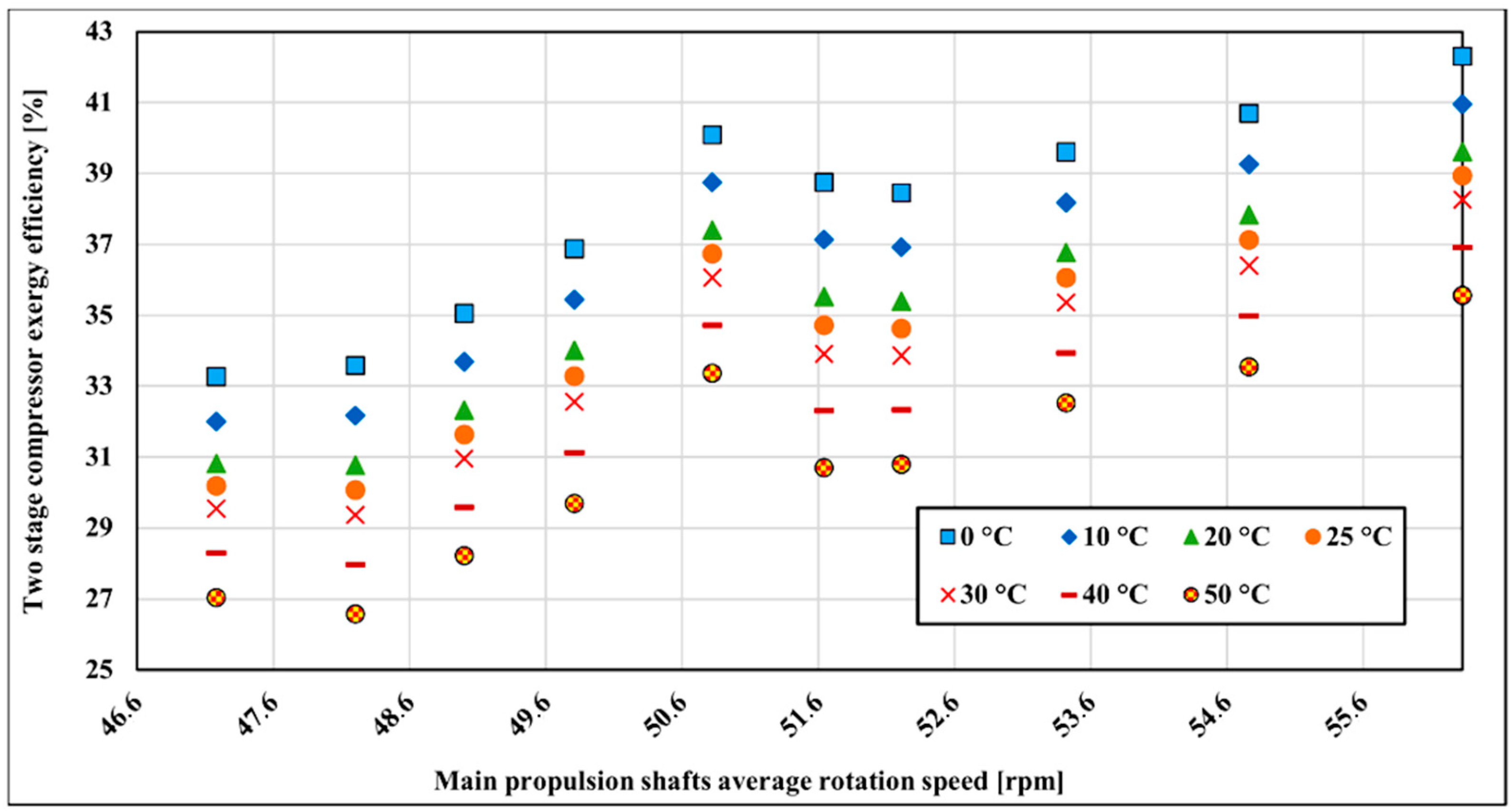