:
The core objective of the present study is to examine entropy generation minimization via Hall current and Ohmic heating. Carreau fluid considerations interpret the unavailability of systems’ thermal energy (for mechanical work). The magneto hydrodynamic flow is in the channel, which is not symmetric. We have solved analytically the resulting nonlinear mathematical model. Moreover, physical exploration of important parameters on total entropy generation, temperature, and Bejan number is plotted and discussed. We observed that the generation of entropy takes place throughout the confined flow field y = W1 and y = W2 because of the viscous dissipation effect. In addition, reducing the operating temperature minimizes the entropy.
Keywords:
entropy; peristalsis; Carreau fluid; heat transfer; perturbation; pumping and trapping

The Carreau fluid of constant density, moving in a channel, which is asymmetric in nature, is considered here. The rectangular coordinates are with U as the axial velocity component. Channel walls are maintained at temperatures and . The velocity field is mathematically defined by . The walls of the geometry are given as: where represent the lower and upper walls, the amplitudes, the phase difference, the wave speed, the wavelength, and the time. The geometry of the flow problem is given in Figure 1.
The Lorentz body force and Joule heat affecting the flow are determined by: Here, shows the current density for the magnetic field, and represents the electric conductivity of the fluid. The constitutive laws of mass, momentum, and energy via the Joule heating, Hall current, and viscous dissipation are: where shows density, is the thermal conductivity, the specific heat, and the extra stress tensor.

The stress-strain relationship of the Carreau fluid model is: and here, are infinite and initial shear rate viscosities and . The components of extra stress tensors are:

The transformation: convert Equations (4)–(6) to: Introducing dimensionless variables and parameters: Equations (12)–(15), along with low Reynold number and long wavelength assumptions, yield: As , therefore Equation (17) yields: In the above equations, are the notations for the Brinkman number, Weissenberg number, Hartman number, Hall parameter, stream function, and temperature, respectively. The associated non-dimensional boundary conditions are: where is related to the fixed frame by

Fluid irreversibilities in the current problem are due to heat diffusion, viscous dissipation, and the magnetic field, respectively. Based on these, the dimensional entropy generation is defined as: The characteristic entropy is defined as The total entropy generation rate, denoted by , is the relation between the actual entropy to the characteristic entropy. In dimensional form, entropy generation via stream function presentation: Here, the temperature difference parameter is labelled by , and .
The Bejan number identified by is the proportion of heat irreducibility to the total entropy generation. Basically, the number comprehends the mechanism of the production of entropy. defines equal irreversibility, due to heat and other contributing factors. For dominating heat irreversibilities, , while implies that the contributing factors of fluid friction and magnetic field are noteworthy. The Bejan number ranges between zero and one.

Our problem is non-linear and coupled in nature. The computation of the exact solution is not possible; therefore, perturbation techniques are employed to solve the resulting governing equations. We apply regular perturbation of the fluid parameter, the Weissenberg number as: Substituting these into Equations (19) and (20), we construct the zeroth order and first order systems with reference to the fluid parameter.

Figure 4a–f shows the behavior of temperature for different physical parameters, particularly the Hartman number Hall parameter Brinkman number , power law index (n), and Biot numbers Figure 4a depicts that the temperature profile gradually rose for increasing values of the Hartman number . Basically, magnetic field lines interacted electrically with the fluid and produced Lorentz force. Lorentz force retarded the fluid motion (transforming the kinetic energy of the electrically conducting fluid to heat energy), and fluid temperature rose. It is found from Figure 4b that the temperature is lowered because of the increase in the electrical conductivity of the fluid. Figure 4c elucidates that under the influence of the Brinkman number, the temperature rose. The reason behind this is that for a large value of the Brickman number, the frictional force increased (due to the collision of fluid molecules with each other), and as a result, kinetic energy converted into thermal energy, implying a rise in total fluid temperature. The influence of the Biot number on the temperature is presented in Figure 4d,e. Temperature decreased at the upper wall by the increase of , and it had no visible effect on the lower wall. In contrast, the temperature escalated at the lower wall with the increase of , and a negligible difference was observed on the upper wall. In most of the cases, for small Biot numbers, temperature uniformly distributed inside the fluid, whereas for Biot numbers greater than 0.1, irregularity resulted. Therefore, we tool a special case for a large value of the Biot number. Figure 4f elucidates that temperature increased for increasing values of the power law index.

Axial velocity serves to provide salient feature of flow behavior. Figure 5a–c portrays the impact velocity profile in a channel with convective boundaries. We observed that the velocity formed a parabolic trajectory for physical parameters, and maximum velocity occurred at . Figure 5a portrays that the axial velocity decreased for the increasing value of the Hartman number. Since the Hartman number directly relates the magnetic force and this force is resistive in nature, therefore the velocity decreased. Figure 5b demonstrates the influence of the Hall parameter . Here, the velocity accelerated at the center of the channel while it reduced at the edges, the reasons behind this being that caused an upsurge of the electrical conductivity of the fluid; hence, the velocity increased. Figure 5c shows the comparison of viscous and Carreau fluids. It gained maximum velocity for a Newtonian fluid, while it reduced for the non-Newtonian Carreau fluid. Furthermore, it restored the symmetry about the center line.

5.4. Analysis of the Pressure Gradient and the Rate of Heat Transfer

Streams lines were plotted to depict the flow pattern. The trapping phenomenon for fluid parameters (Hartman number), (Hall parameter) and (Weissenberg number) was described through plotting the streams lines. Figure 8, Figure 9 and Figure 10 show that the bolus size decreased for increasing values of the Hartman number and Weissenberg number. Figure 10a–c depict the opposite trend that is for higher values of hall parameter bolus size not only increases but number of closed stream lines also increases in count.

5.6. Analysis of Entropy Generation Due to Heat Diffusion and Viscous Dissipation

We analyzed the entropy generation via the Ohmic heating and Hall current in peristaltically-flowing Carreau fluid. The conclusions are stated below.

The authors would like to thank Ton Duc Thang University, Ho Chi Minh City, Vietnam, for the financial support. 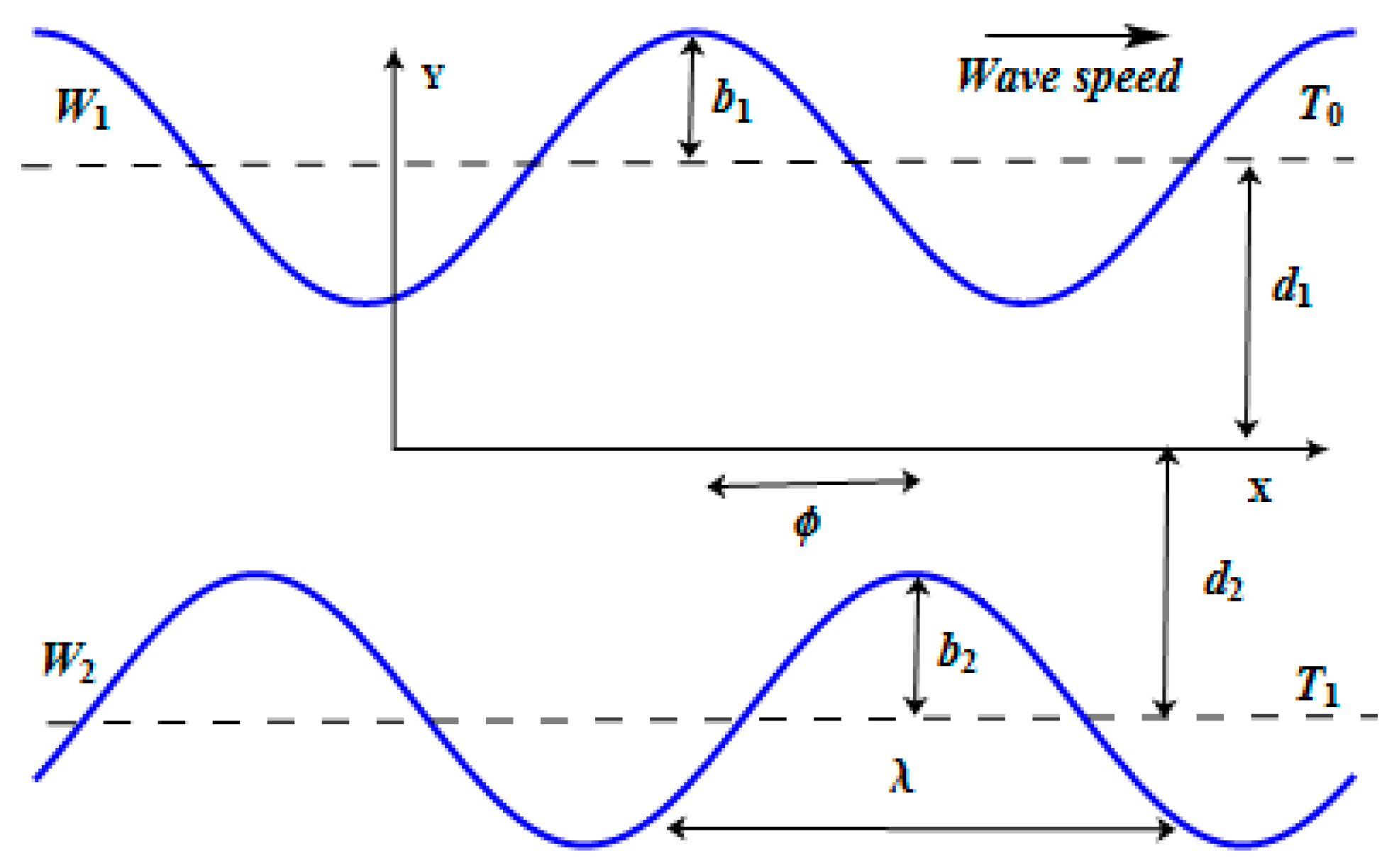 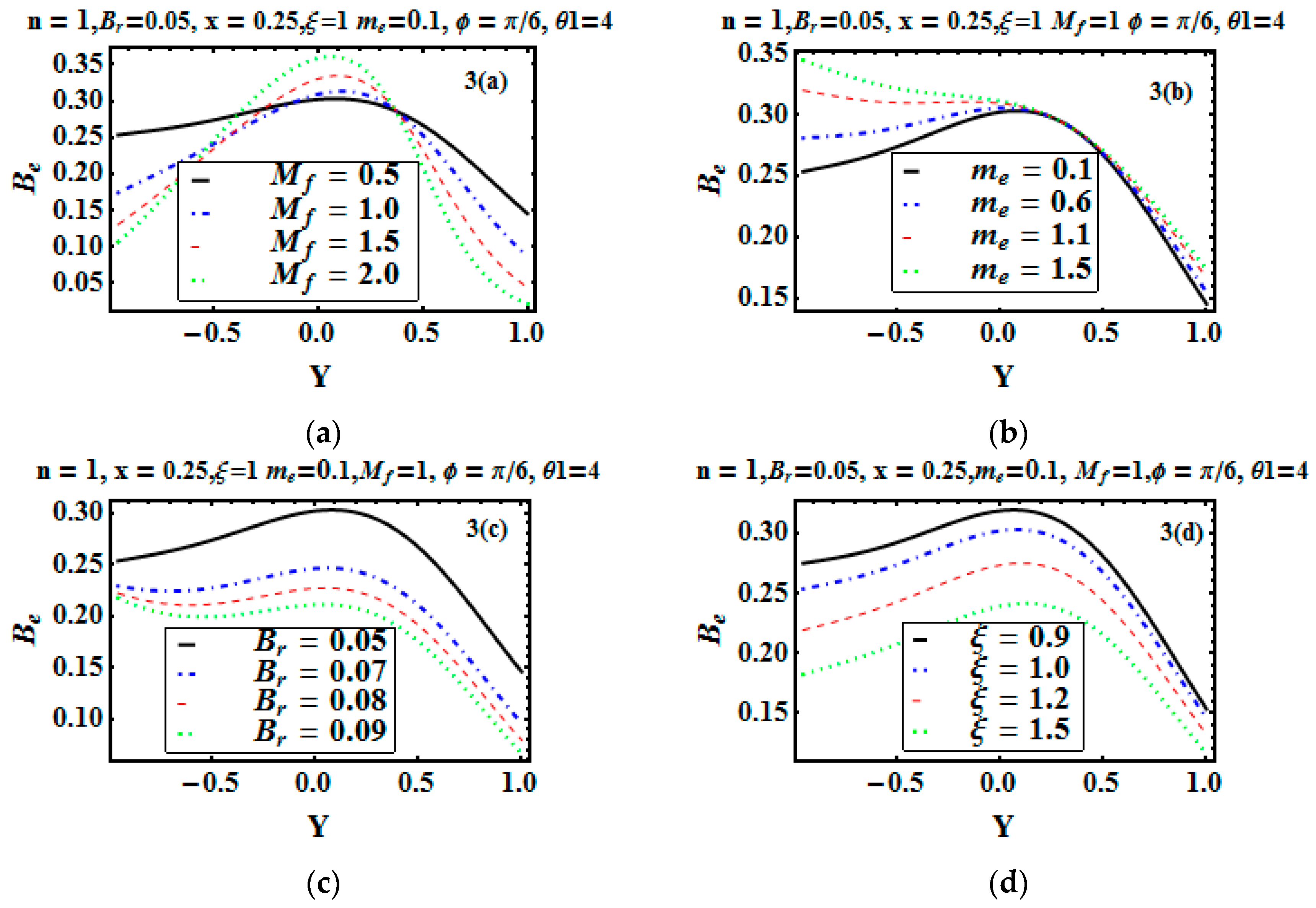 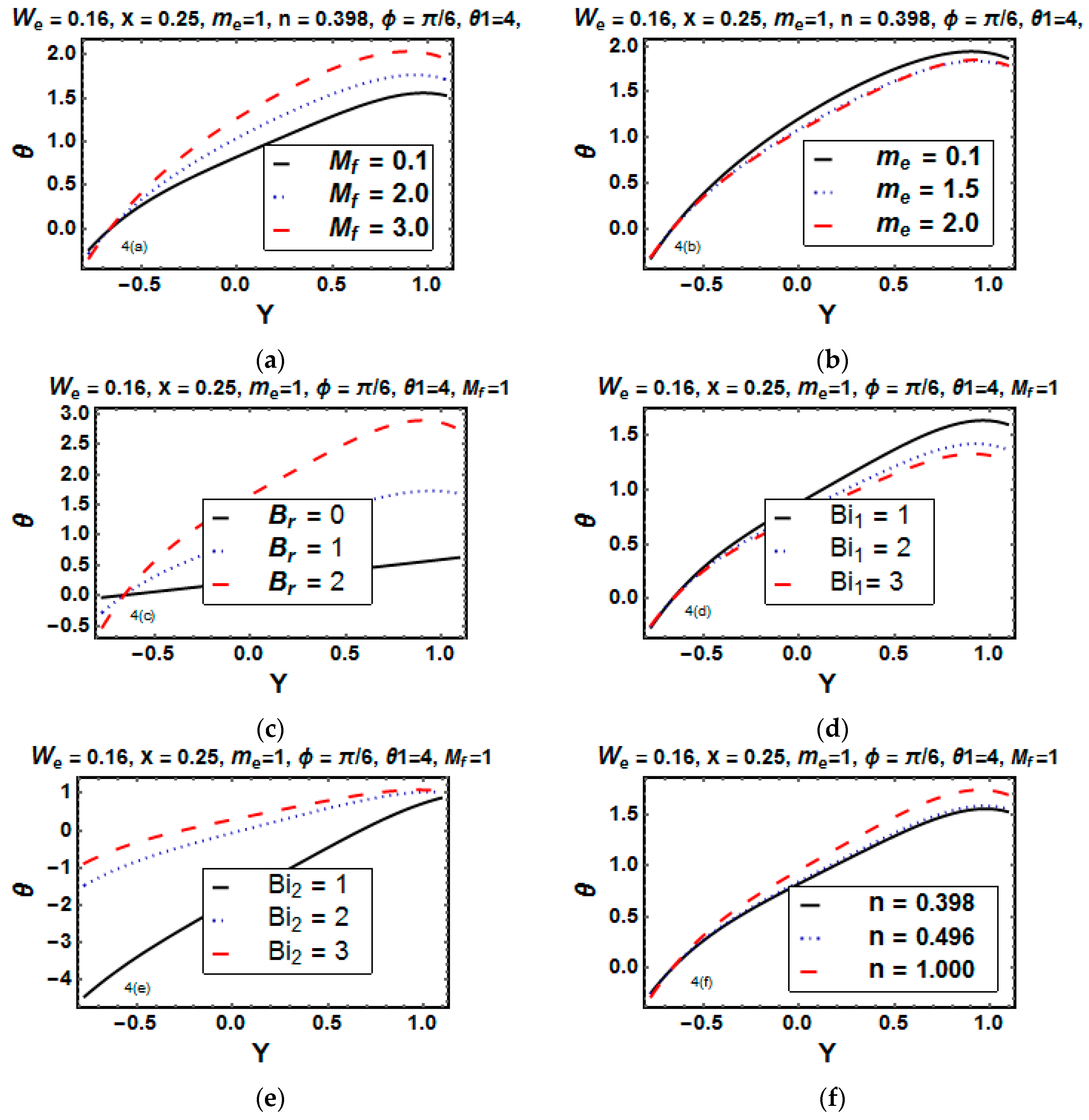 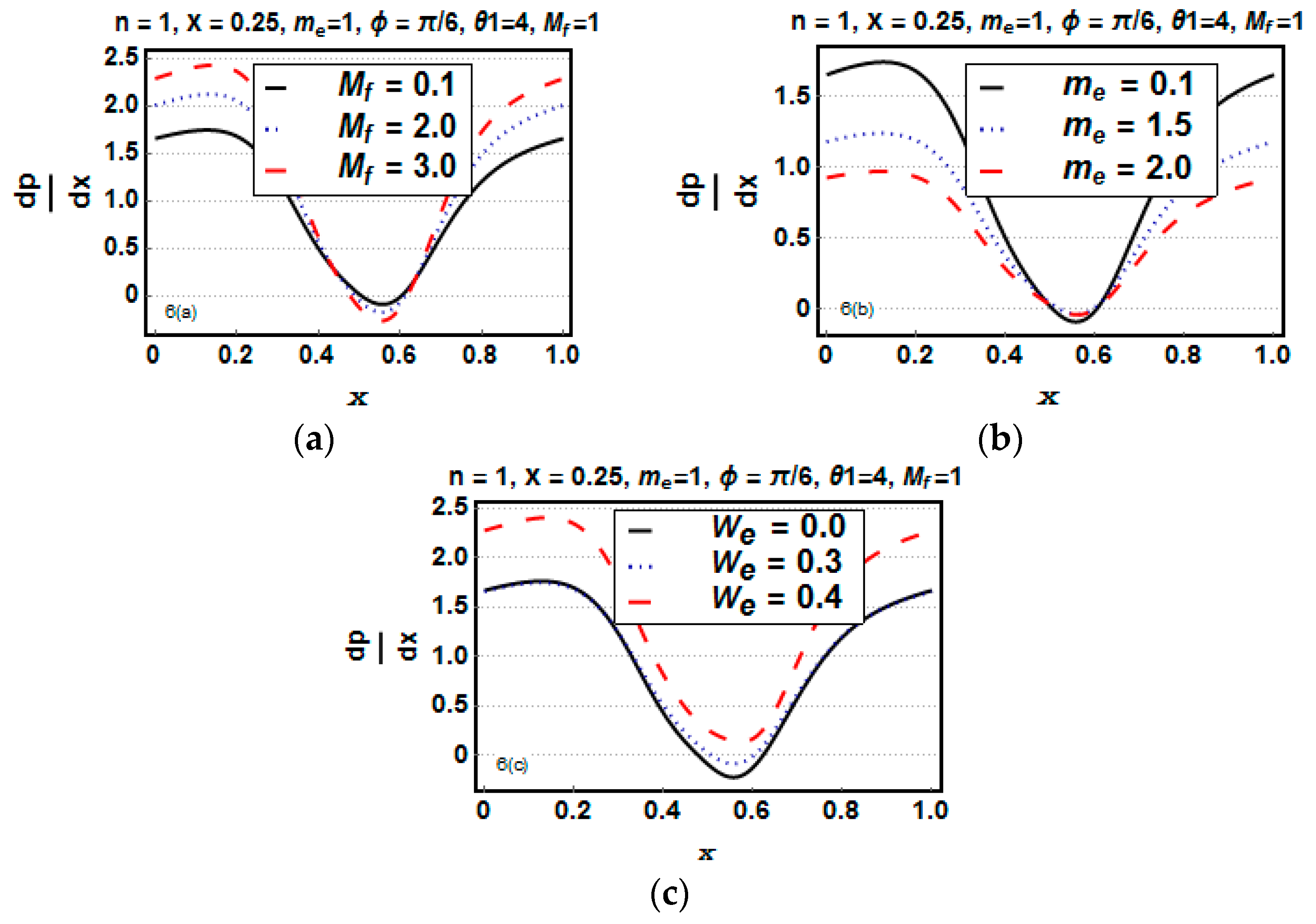 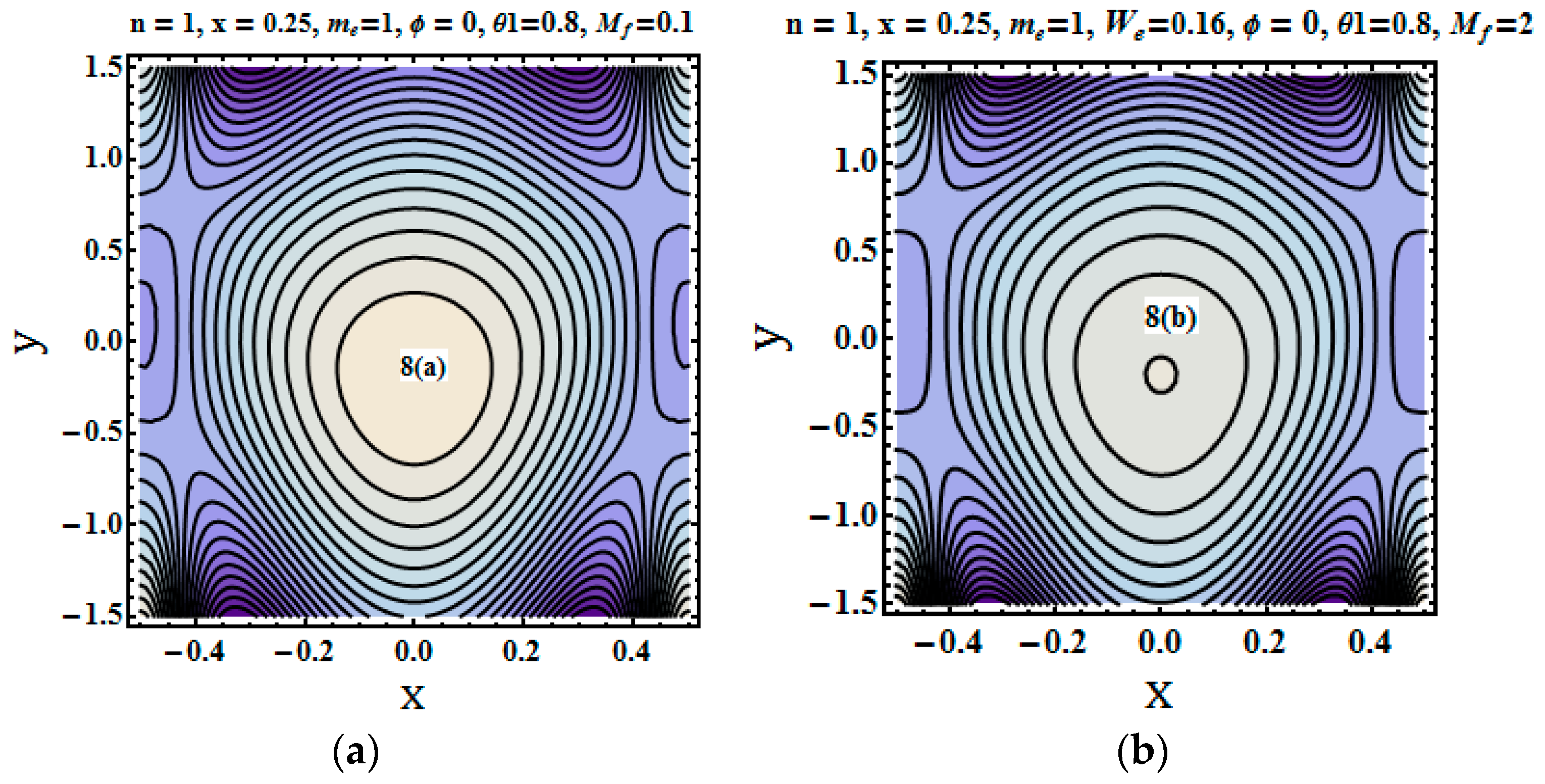