In this paper, an improved system to efficiently utilize the low-temperature waste heat from the flue gas of coal-fired power plants is proposed based on heat cascade theory. The essence of the proposed system is that the waste heat of exhausted flue gas is not only used to preheat air for assisting coal combustion as usual but also to heat up feedwater and for low-pressure steam extraction. Air preheating is performed by both the exhaust flue gas in the boiler island and the low-pressure steam extraction in the turbine island; thereby part of the flue gas heat originally exchanged in the air preheater can be saved and introduced to heat the feedwater and the high-temperature condensed water. Consequently, part of the high-pressure steam is saved for further expansion in the steam turbine, which results in additional net power output. Based on the design data of a typical 1000 MW ultra-supercritical coal-fired power plant in China, an in-depth analysis of the energy-saving characteristics of the improved waste heat utilization system (WHUS) and the conventional WHUS is conducted. When the improved WHUS is adopted in a typical 1000 MW unit, net power output increases by 19.51 MW, exergy efficiency improves to 45.46%, and net annual revenue reaches USD 4.741 million while for the conventional WHUS, these performance parameters are 5.83 MW, 44.80% and USD 1.244 million, respectively. The research described in this paper provides a feasible energy-saving option for coal-fired power plants. View Full-Text
Keywords: coal-fired power plants; waste heat utilization; thermodynamic analysis; exergy analysis; techno-economic analysis coal-fired power plants; waste heat utilization; thermodynamic analysis; exergy analysis; techno-economic analysis
►▼ Show Figures 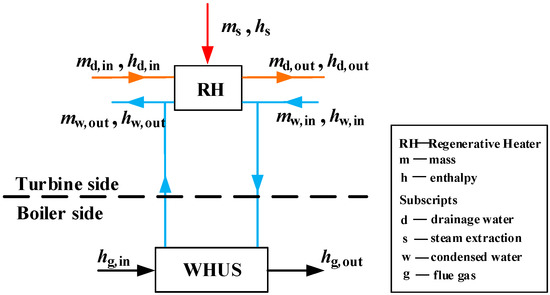