The aim of the study was to analyze heart rate variability (HRV) response to high-intensity exercise during a 35-km mountain trail race and to ascertain whether fitness level could influence autonomic nervous system (ANS) modulation. Time-domain, frequency-domain, and multi-scale entropy (MSE) indexes were calculated for eleven mountain-trail runners who completed the race. Many changes were observed, mostly related to exercise load and fatigue. These changes were characterized by increased mean values and standard deviations of the normal-to-normal intervals associated with sympathetic activity, and by decreased differences between successive intervals related to parasympathetic activity. Normalized low frequency (LF) power suggested that ANS modulation varied greatly during the race and between individuals. Normalized high frequency (HF) power, associated with parasympathetic activity, varied considerably over the race, and tended to decrease at the final stages, whereas changes in the LF/HF ratio corresponded to intervals with varying exercise load. MSE indexes, related to system complexity, indicated the existence of many interactions between the heart and its neurological control mechanism. The time-domain, frequency-domain, and MSE indexes were also able to discriminate faster from slower runners, mainly in the more difficult and in the final stages of the race. These findings suggest the use of HRV analysis to study cardiac function mechanisms in endurance sports. View Full-Text
Keywords: complexity; heart rate variability; multi-scale entropy; time series analysis complexity; heart rate variability; multi-scale entropy; time series analysis
►▼ Show Figures 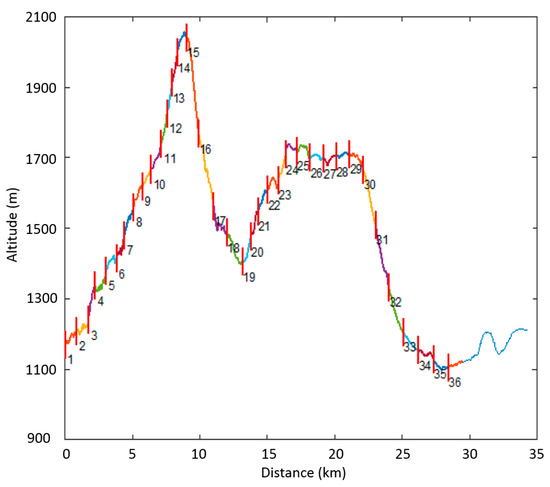