Depth of anaesthesia (DoA) is an important measure for assessing the degree to which the central nervous system of a patient is depressed by a general anaesthetic agent, depending on the potency and concentration with which anaesthesia is administered during surgery. We can monitor the DoA by observing the patient’s electroencephalography (EEG) signals during the surgical procedure. Typically high frequency EEG signals indicates the patient is conscious, while low frequency signals mean the patient is in a general anaesthetic state. If the anaesthetist is able to observe the instantaneous frequency changes of the patient’s EEG signals during surgery this can help to better regulate and monitor DoA, reducing surgical and post-operative risks. This paper describes an approach towards the development of a 3D real-time visualization application which can show the instantaneous frequency and instantaneous amplitude of EEG simultaneously by using empirical mode decomposition (EMD) and the Hilbert–Huang transform (HHT). HHT uses the EMD method to decompose a signal into so-called intrinsic mode functions (IMFs). The Hilbert spectral analysis method is then used to obtain instantaneous frequency data. The HHT provides a new method of analyzing non-stationary and nonlinear time series data. We investigate this approach by analyzing EEG data collected from patients undergoing surgical procedures. The results show that the EEG differences between three distinct surgical stages computed by using sample entropy (SampEn) are consistent with the expected differences between these stages based on the bispectral index (BIS), which has been shown to be quantifiable measure of the effect of anaesthetics on the central nervous system. Also, the proposed filtering approach is more effective compared to the standard filtering method in filtering out signal noise resulting in more consistent results than those provided by the BIS. The proposed approach is therefore able to distinguish between key operational stages related to DoA, which is consistent with the clinical observations. SampEn can also be viewed as a useful index for evaluating and monitoring the DoA of a patient when used in combination with this approach. View Full-Text
Keywords: electroencephalography; empirical mode decomposition; Hilbert–Huang transform; depth of anaesthesia; sample entropy electroencephalography; empirical mode decomposition; Hilbert–Huang transform; depth of anaesthesia; sample entropy
►▼ Show Figures 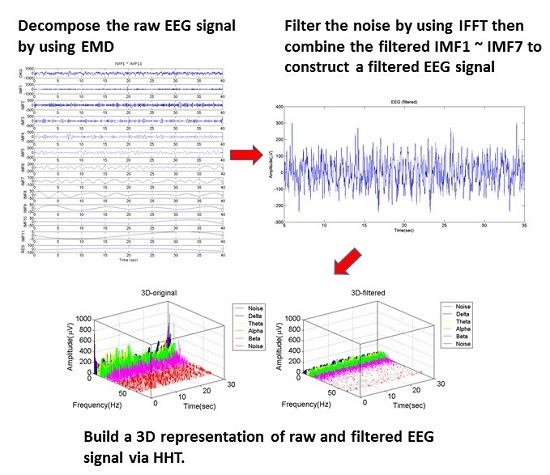