More than 200 years ago, Franklin [1] and Dalibard [2] independently discovered atmospheric electricity. Shortly after, many scientists studied the biological effects of positive and negative air ions [3]. The effects include the killing of bacteria [4], changing the growth rate of plants and insects [5,6], as well as various physiological and behavioral changes in animals, including humans [7,8]. However, there is still no agreement to date on the mechanism of how the charged air ions affect biological system.
We discovered a long-range feature of water next to hydrophilic surfaces [9–11] which forms a unique and extensive structure that has different physico-chemical properties from bulk water. This said form water is found to have a net negative charge. This is significant because interfacial water is ubiquitous in nearly all biological environments and involved in all major cellular processes [12], implying that it might be a common target for the known effects of atmospheric electricity. We produced air ions using coronal discharge [13] and studied the effects of those positive air ions on the electrical properties of interfacial water. Clear effects were found. On this basis, we propose a new way to explain the biological effects of air ions.

The electrical properties of interfacial water next to hydrophilic surfaces were measured with and without coronal discharge. Nafion 117 perfluorinated membranes (0.007 in. thick, Sigma-Aldrich, Saint Louis, MO, USA) were used as the hydrophilic surface. Before use, the Nafion membrane was immersed in deionized water for 10 min at room temperature.
Deionized water was obtained from a NANOpure Diamond ultrapure water system. The purity of water from this system was certified by a resistivity value up to 18.2 MΩ-cm, which exceeded American Society for Testing and Materials (ASTM), College of American Pathologist/ National Committee for Clinical Laboratory Standards (CAP/NCCLS) type I water requirements. In addition, the deionized water was passed through a 0.2-μm hollow fiber filter to ensure bacteria- and particle-free water before filling the glass chamber (dimensions: 7 cm × 4.5 cm × 2.5 cm) to a consistent height of 1 cm for all experiments.
As the probing electrode, we used standard glass microelectrodes pulled by a micropipette puller (P-87, Sutter Instrument, Novato, CA, USA) and filled with 3M KCl. Diameters of the microelectrode tips were less than 1 μm. To check for electrode quality, the probing and reference electrodes were immersed in 3M KCl prior to each experiment. In 3M KCl, the potential difference between the two electrodes was negligible. However, in deionized water, a DC offset almost always appeared due to deionized water’s poor conductivity. The DC offset could be anywhere between −20 mV to +20 mV. To measure the electrical potential distribution in the water in the vicinity of Nafion, we used a motor to advance the probe electrode. The motor was controlled by software written in Labview, and had a spatial resolution of 1.25 μm.
A high voltage generator (ES30P-5W, Gamma High Voltage Research) was used to create the coronal discharge, which produced positive air ions.
The experimental setup is shown in Figure 1 Electrical potentials were measured with an electrometer (Model 6512, Keithley Instruments, Cleveland, OH, USA) and recorded on the computer through a data acquisition device (USB-6009, National Instruments, Austin, TX, USA). A flexible reference electrode (WPI) was placed remotely from the interfacial region. A 1000 MΩ passive resistor was placed in parallel with the electrometer terminals to keep the load resistance constant and to facilitate readout of the current extracted from the interfacial water. The resistor also helped to reduce ambient electromagnetic noise.
We first positioned the probing microelectrode immediately above and just touching the Nafion surface to obtain the most stable and highest magnitude electrical potential readout. The reference electrode was placed remotely. Before turning on the high voltage source, we measured the potential profile as a function of distance from the Nafion surface. The probing microelectrode was moved away from the Nafion surface by increments of 1.25 μm until it reached 1 mm from the Nafion surface. The electrical potential was recorded at each pause. After the potential profile measurement was completed, the system automatically brought the probing microelectrode back to the Nafion surface. Thus, the data collected provides reference information to be compared with the experimental results obtained in the presence of positive air ions.
High-voltage discharge was used to produce air ions. We turned up the voltage from 0 kV to 10 kV at 1 kV intervals. The discharge electrodes were located 3 cm above the water surface. Potentials as a function of increasing voltage were measured by the probing electrode and recorded simultaneously. Then we maintained the high voltage at 10 kV for 10 min and measured the potential profile once again. We set the 10 kV limit because at about 10.5 to 11 kV, the discharge electrodes began generating electric arcs which interfered with all nearby electronic equipment and made measurements inconsistent thereafter.
The probing microelectrode was brought back to the Nafion surface automatically after the second potential profile measurement was completed. Then we reversed the procedure by turning down the high voltage gradually back to zero and recording the potential between the two electrodes at 1 kV intervals. At the end, the potential profile was recorded again to check the reversibility of the air-ion effect.
Control experiments were conducted to clarify whether the effect on interfacial water was indeed from air ions or from electrical polarization due to the high voltage discharge electrodes or from the ozone generated during the coronal discharge. To test for electrical polarization, we used two identical reference electrodes in deionized water without the Nafion sheet. The two electrodes were placed side by side equally close to the high voltage discharge electrodes horizontally, at different heights in water. To test for the ozone, we used a copper metal mesh to cover the top of the chamber. Since the metal mesh sheet was grounded, no air ions could reach the water, while the electrically neutral ozone could still do so.

Generally speaking, negative charge is believed to promote good health, whereas positive charge compromises health [7–9,15–17]. Nature provides a reasonably balanced supply of air ions; however more negative ions are found at places such as waterfalls and forests [18], which often elicit sensations of well-being. The question arises whether these effects are largely psychogenic or whether some physical mechanism exists to explain the effects.
One common denominator of function may be cell water. By volume, our bodies are roughly 2/3 of water, and much of that water is interfacial; i.e., it resides next to some hydrophilic interface [12]. More recent experimental observations of interfacial water have shown that interfacial water is negatively charged [10,11]. This negative charge could be reduced by atmospheric positivity and thereby cause adverse health effects. In other words, if this water, along with the proteins it envelops, is vital for function, then compromising the amount of interfacial water could impair function.
The experimental results were consistent with this hypothesis. In the experiments involving high voltage, a threshold voltage was required to produce enough air ions to have appreciable impact on the interfacial water. When the discharge electrodes were placed 3 cm from the water surface, the threshold voltage required to produce enough air ions was approximately 8 kV. From this result we infer that positive ions in the air may change concentration appreciably without having adverse health effects. However, beyond a threshold concentration, the ill effects of positive charge may become appreciable— even wiping out the negativity of interfacial water and replacing it with the many positive ions in the water.
The rapid rebuilding of interfacial water once the positive ions were removed is consistent with earlier results. Interfacial water builds rapidly. Once the inhibiting positive ions are removed, the structure can easily and quickly rebuild. In terms of health impact, this suggests that restoration of function can occur rapidly once the positive air ions are removed. This phenomenon can potentially explain the “refreshing” sensation that people often feel when stepping out of a crowded room with positive ions from exhalation, and into fresh air.
We obtained similar results with positive ions produced from an air conditioner. When the conditions are right, enough air ions could be produced to change the electrical properties of the interfacial water. The example of dramatically changed electrical potential indicated that the structure of interfacial water could be completed destroyed by positive air ions, perhaps explaining the serious consequences people can sometimes suffer in sufficiently foul air. More generally, this result may explain the natural craving to escape from air-conditioned environments and into natural air. 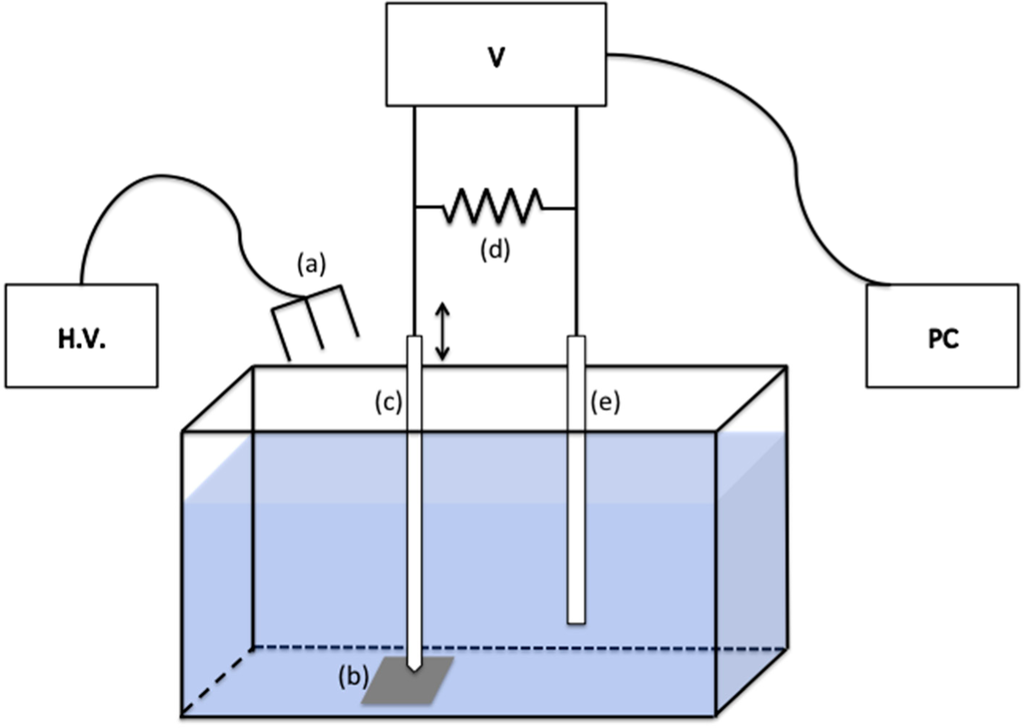 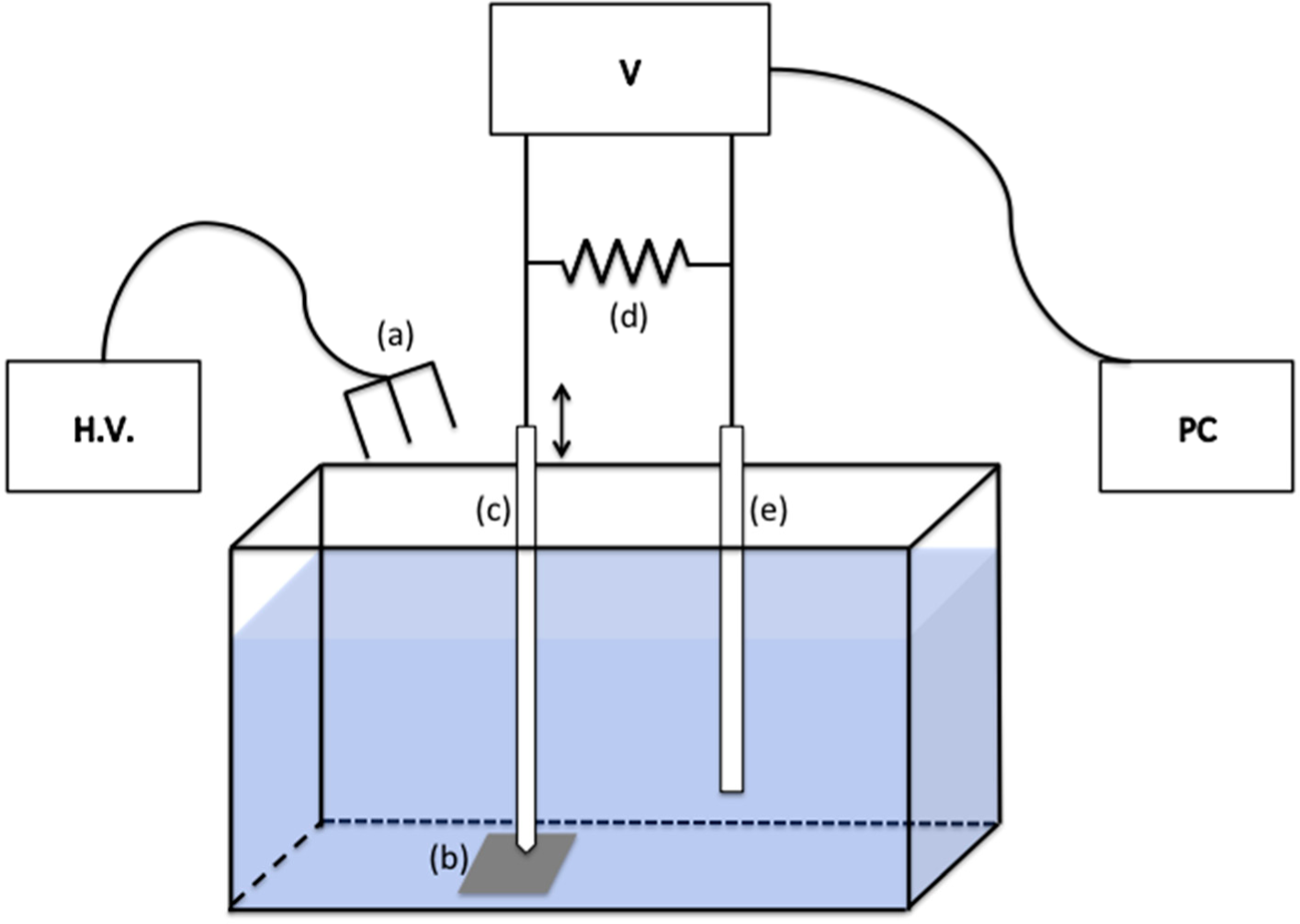 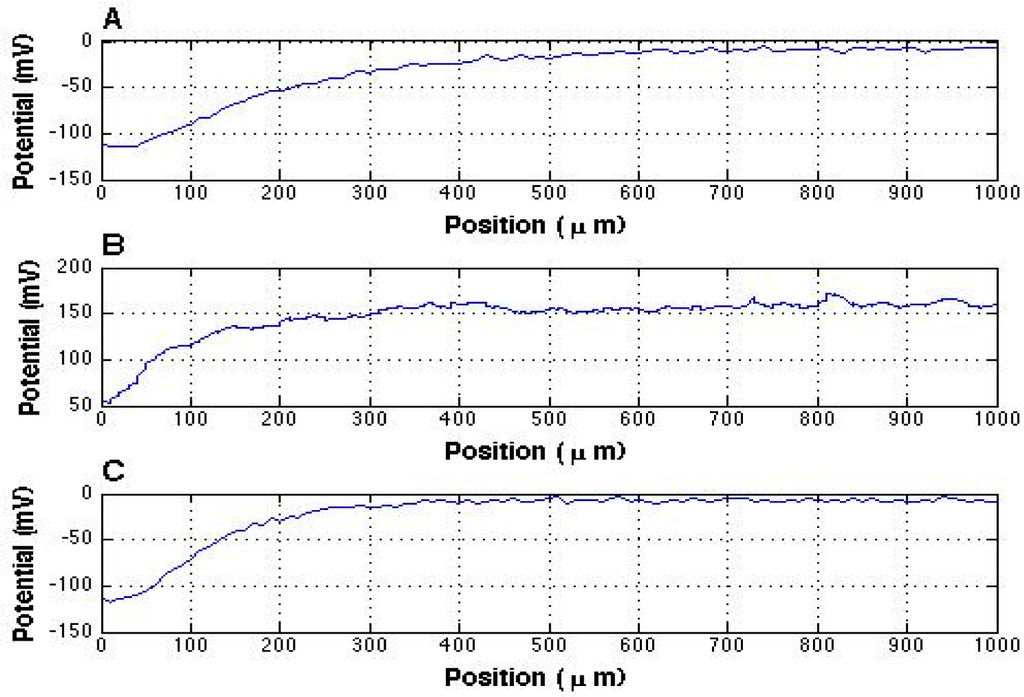 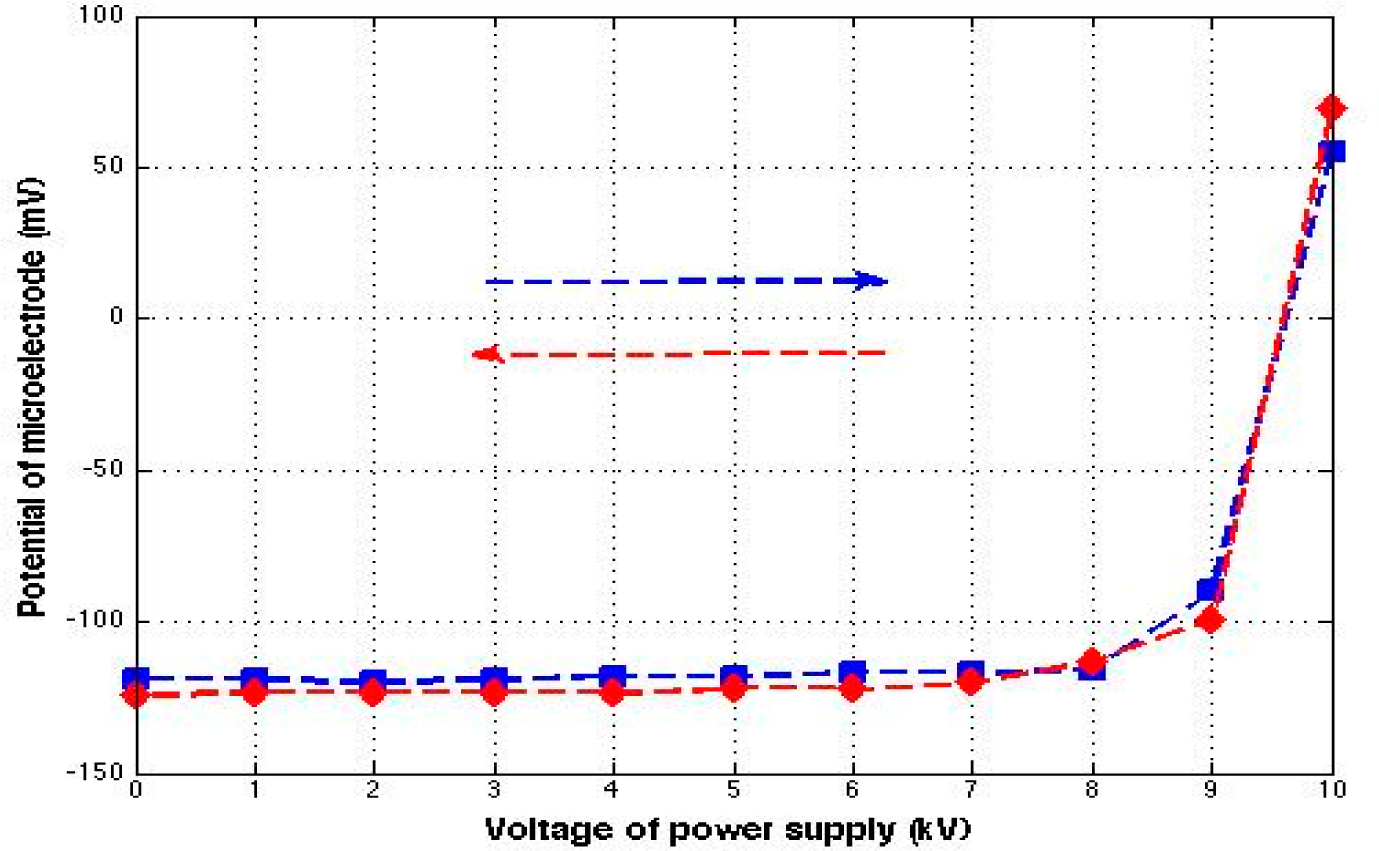 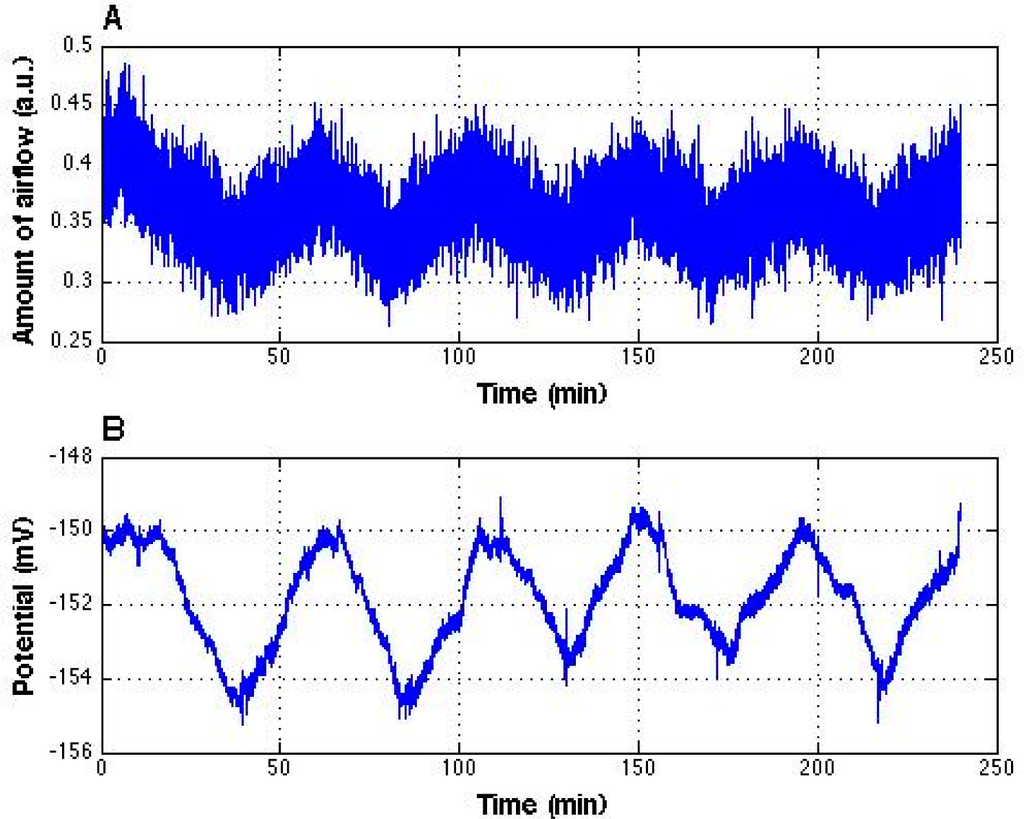 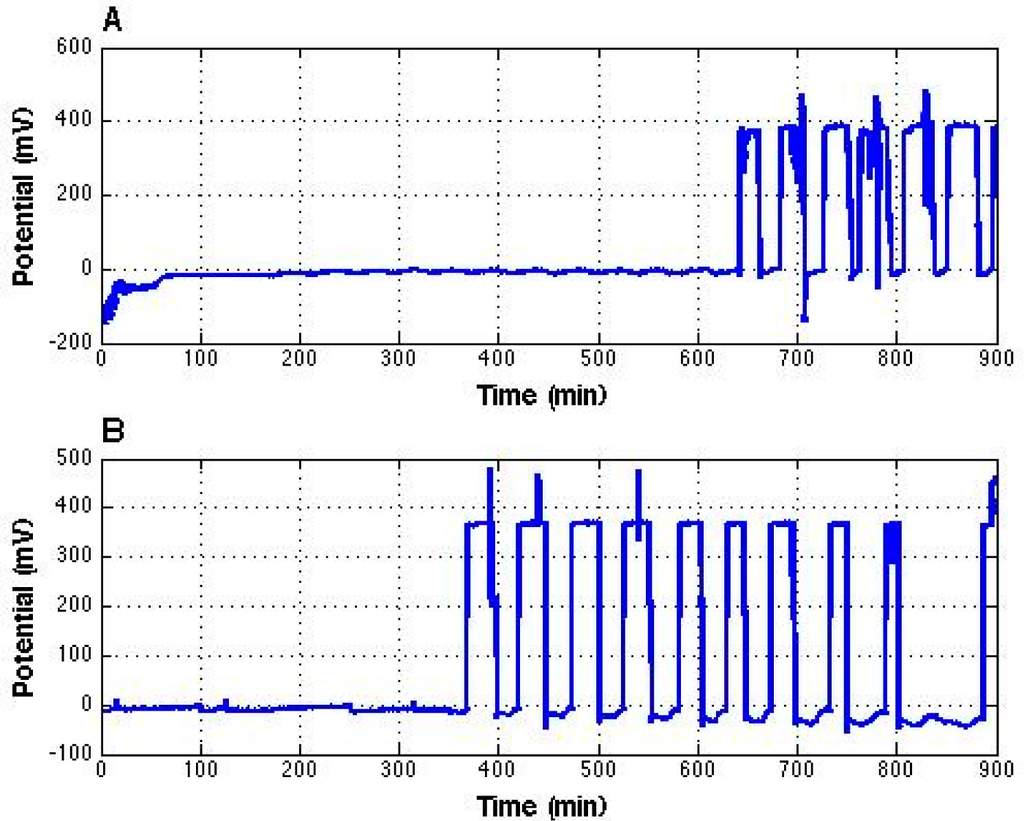 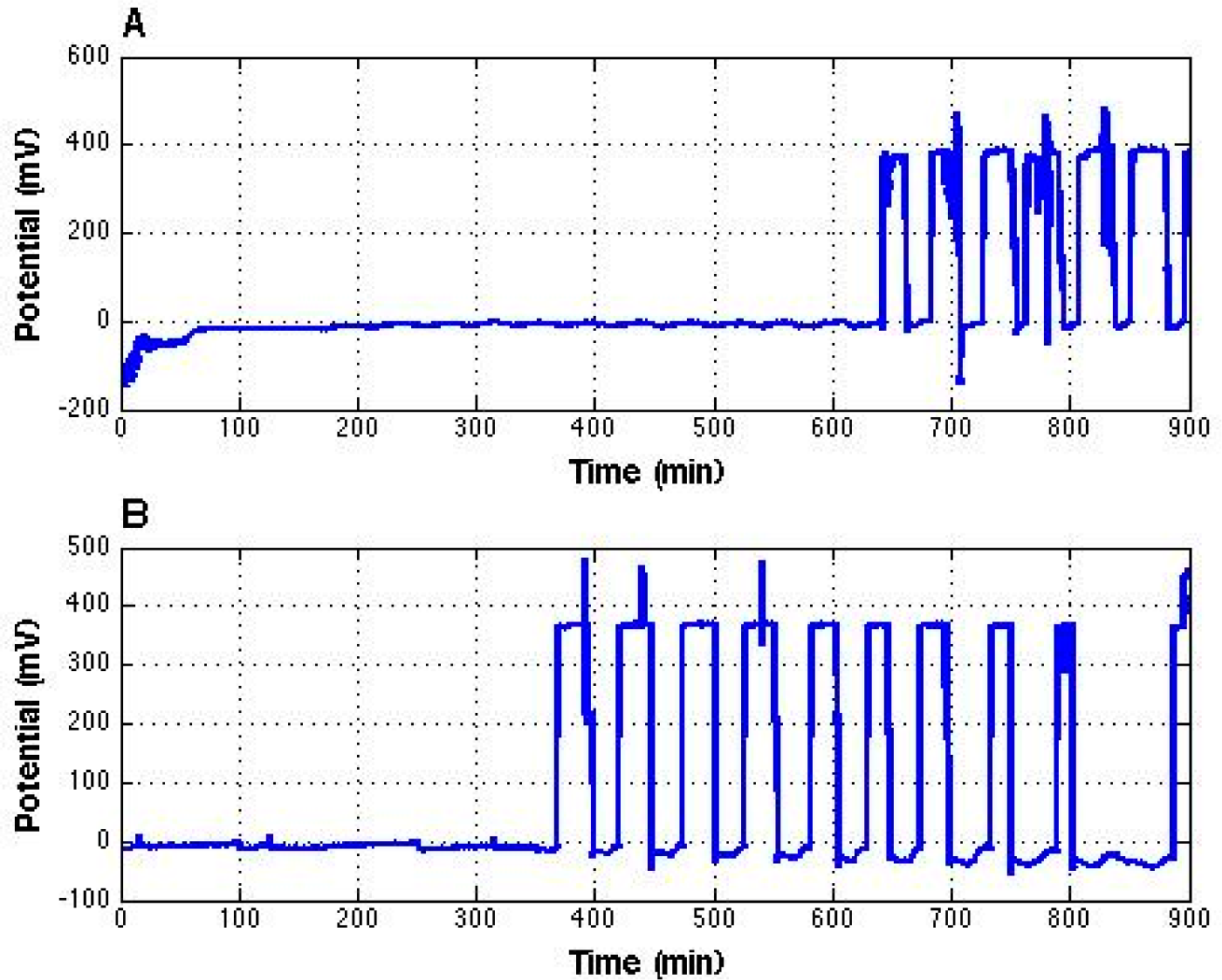 © 2014 by the authors; licensee MDPI, Basel, Switzerland This article is an open access article distributed under the terms and conditions of the Creative Commons Attribution license (http://creativecommons.org/licenses/by/4.0/).