The atraumatic restorative treatment (ART) technique is based on minimal intervention philosophy that removes decayed tissue using hand tools followed by cavity restoration with glass ionomer cement (GIC) [1]. Normally, this technique is performed in situations where conventional rotary instruments cannot be used, e.g., a lack of electricity, or in special situations, such as children or special patients, among them, those who suffer from anxiety [2,3]. Another advantage to using the ART technique associated with GIC is the possibility of not generating aerosols. This topic has become very important because of the COVID-19 pandemic, since the formation of aerosols causes a large dispersion of microorganisms which increases the possibility of contamination. The use of atraumatic procedures is important to improve patients’ quality of life, provide the most friendly dental treatment and reduce further complications and psychological issues [4,5].
GICs are suitable materials because of their properties such as biocompatibility, insulating effect in the oral temperatures, antibacterial capacity, fluoride release and the possibility of manual manipulation [6,7]. On the other hand, although GICs are the material of choice for the ART technique, this material presents a poor mechanical property for areas of large masticatory forces when compared to composite resin or amalgam [8]. This is still considered the main point of failure of this technique, which makes high-viscosity GIC more promising in comparison with low-viscosity GIC [6]. Regardless of the infected carious dentin layers [9], the ART technique with GIC could provide an adequate and accessible treatment.
To improve GICs’ mechanical properties, the addition of different materials has been considered, such as metal, hydroxyapatite or even natural products such as propolis [10,11,12]. Currently, an approach involving the addition of carbon nanotubes in restorative materials has been reported due to its extraordinary mechanical, electrical and thermal properties and its ability to provide structural reinforcement to dental materials [13,14]. Besides presenting good mechanical properties, the incorporation of nanotubes presents important biological characteristics regarding the adhesion to odontoblasts and fibroblasts and the induction of apatite precipitation [15]. Therefore, previous investigations have evaluated the applications of carbon nanotubes in dentistry, such as: hydroxyapatite coatings, bone engineering, dental composites, polymethyl methacrylate, dental prostheses and cements [16].
The literature reports that adding fluorinated graphene to traditional GICs could improve the mechanical and tribological properties of the composites and their antibacterial properties [17]. However, the color stability of modified GIC could not be adequate for use in anterior esthetic restorations [18]. The influence of different GIC viscosities associated with multi-walled carbon nanotubes (MWCNTs) on different mechanical properties has not been investigated yet. Thus, the aim of the present study was to evaluate the compressive and tensile strengths of different GICs after incorporating, or not, MWCNT. The null hypothesis was that there is no mechanical difference between the different GICs after MWCNT incorporation.

Four groups (Table 1) were manufactured according to the GIC (conventional (Aqua Ionofil Plus, Voco, Cuxhaven, Germany) and low-viscosity (Argion Molar, Voco, Cuxhaven, Germany)) and carbon nanotube incorporation (present or not). The nanotubes were manufactured in the Nanomaterials Laboratory of the Physics Department in the University of Minas Gerais [19]. The carbon nanotubes had an average length of 200 nm and an average outer diameter of 25 nm and were functionalized through oxidation in nitric/sulfuric acid [19]. For both tested materials, the powder/liquid ratio followed the manufacturer’s recommendation.
For this study (Figure 1), eighty (80) specimens were prepared with precision scales for measuring the amount of powder and automatic pipettes for liquid according to the manufacturer’s instructions, followed by mixing using an appropriate block and flexible plastic spatula. GIC was poured into metal matrix mold with the aid of Centrix tips and pressed with polyester matrix and glass slide on the specimen, promoting a straight and smooth surface. The concentration of nanotubes incorporated into the GIC in the experimental group was 1% of the GIC mass powder, manually incorporated during the powder measurement and prior to the manipulation. The concentration was determined after a pilot study, which tested 1%, 5%, 10% and 15%. The proper GIC manual manipulation by dentists could only be performed with 1% concentration, since higher concentrations resulted in a rubber material.
After the initial reaction, the specimens were removed from the matrix, and the surfaces were protected with petroleum jelly. They were stored for 24 h in deionized water. After this, specimens were subjected to compression and diametrical tensile tests.
For the compressive strength test, specimens 6 mm in height and 4 mm in diameter (n = 10 per group; N = 40) were prepared using metal molds, following ISO 9917-1/2007 [17]. A universal testing machine was employed to test the specimens using 0.5 mm/s as the rate of loading. The compressive strength of samples was calculated with the following formula: where F = load to fracture, r = the radius of the specimen cylinder and π = (constant) 3.14. Values of σc (kgf/cm2) were converted into MPa.
For the diametral tensile test, specimens were prepared (n = 10 per group; N = 40) with dimensions of 2 mm in height and 4 mm in diameter in metal molds, according to ISO 9917-1/2007 [17]. A universal testing machine was employed to test samples using 0.5 mm/s as the rate of loading. The diametral tensile strengths of samples were calculated with the following formula: where F = load applied, d = diameter of the cylinder, h = height of the cylinder and π = (constant) 3.14. Values of σt (kgf/cm2) were converted into MPa.
After the compressive test, all specimens from each group were selected and inspected; however, a representative randomly selected specimen was captured (70×, 2000× and 5000× magnification) using scanning electron microscopy (SEM; Inspect S50, FEI, Brno, Moravia, Czech Republic). The specimens were sputter coated with gold for 180 s at 40 mA, creating a 30 nm-thick coating layer, and then examined under different standard SEM magnifications operated at 20 kV using secondary electron detection.
The data were tested for a normal distribution using the Shapiro–Wilk test. Since the data were normally distributed, two-way ANOVA and the Tukey test were used for both tested variables. The dependent factor was the values obtained in each test, and the independent factors were the tested materials (conventional or high-viscosity GIC), and the presence or absence of nanoparticles (MWCNT). The statistical analysis was performed considering a 95% confidence interval (p = 0.05).

For both compressive (p = 0.1739) and tensile (p = 0.2183) strengths, the GIC viscosity did not influence the results. The presence of MWCNTs decreased the mean compressive strength values (p = 0.0001) and increased the diametral tensile strength (p = 0.0059).
Table 2 shows the mean values (MPa) and standard deviations obtained for the compressive strength and the diametral tensile strength for the evaluated conditions.
For the microscopy analysis (Figure 2), it was possible to observe a similar surface pattern between the groups with similar viscosity. The presence of voids is less visible in the group with high-viscosity glass ionomer cement and absence of MWCNTs. In addition, at higher magnification (5000×), it was possible to observe the presence of small cracks between the particles in the groups with MWCNTs; therefore, the structure between the groups was very similar. 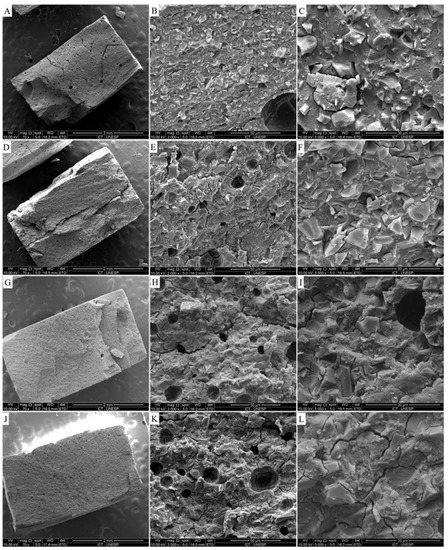 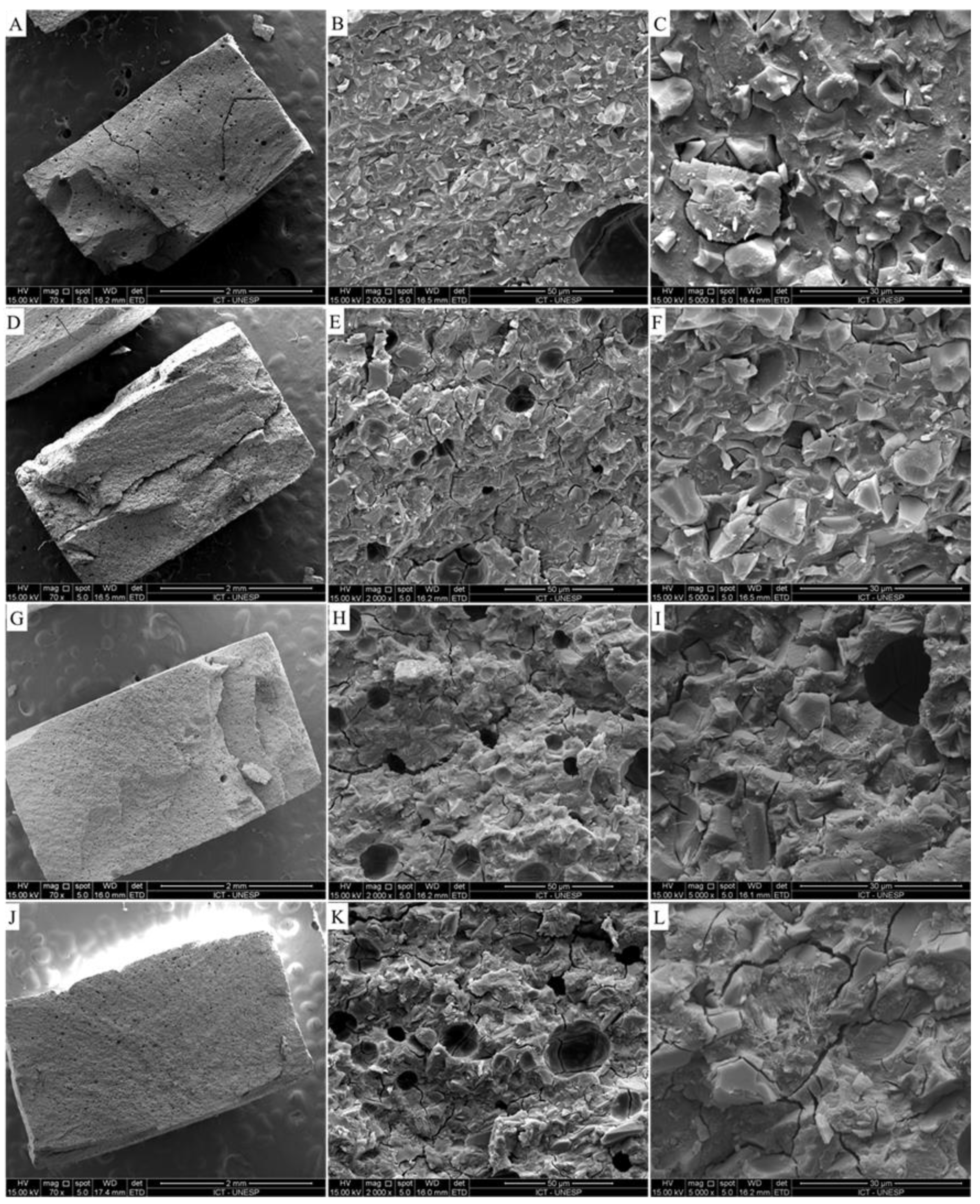