An extended experimental method is presented in which the micro-pillar shear-stress sensor (MPS) and high-speed stereo particle-image velocimetry measurements are simultaneously performed in turbulent channel flow to conduct concurrent time-resolved measurements of the two-dimensional wall-shear stress (WSS) distribution and the velocity field in the outer flow. The extended experimental setup, which involves a modified MPS measurement setup and data evaluation compared to the standard method, is presented and used to investigate the footprint of the outer, large-scale motions (LSM) onto the near-wall small-scale motions. The measurements were performed in a fully developed, turbulent channel flow at a friction Reynolds number . A separation between large and small scales of the velocity fluctuations and the WSS fluctuations was performed by two-dimensional empirical mode decomposition. A subsequent cross-correlation analysis between the large-scale velocity fluctuations and the large-scale WSS fluctuations shows that the streamwise inclination angle between the LSM in the outer layer and the large-scale footprint imposed onto the near-wall dynamics has a mean value of , which is consistent with the literature relying on direct numerical simulations and hot-wire anemometry data. When also considering the spatial shift in the spanwise direction, the mean inclination angle reduces to . View Full-Text
Keywords: particle-image velocimetry; micro-pillar shear-stress sensor; turbulent channel flow; wall-shear stress particle-image velocimetry; micro-pillar shear-stress sensor; turbulent channel flow; wall-shear stress
►▼ Show Figures 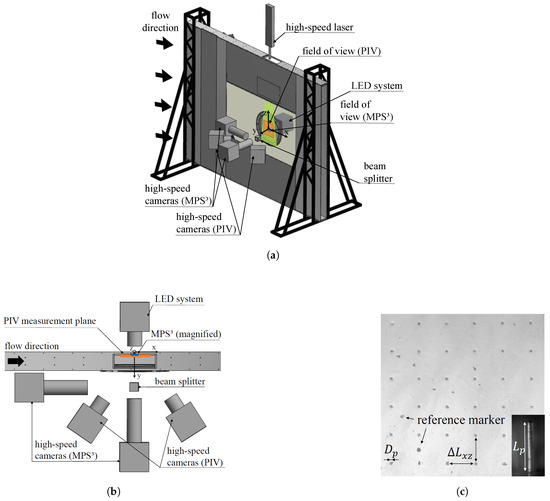