The Generalized Softened Variable Angle Truss Model (GSVATM) allows one to compute the global behavior of reinforced concrete (RC) beams under torsion, including the pre- and post-cracking stage. In a previous study, such a model was successfully extended to cover prestressed concrete beams under torsion with longitudinal and uniform prestress. In order to continue to extend the theoretical model for other loading cases, in this article, the GSVATM is extended to cover RC beams under torsion combined with external and centered axial forces. The changes in GSVATM are presented, as well as the modified calculation solution procedure. Some theoretical predictions from the extended GSVATM are compared with numerical results from the non-linear finite element method (FEM), where good agreement is observed for the studied trends. View Full-Text
Keywords: RC Beams; torsion; axial force; GSVATM; FEM RC Beams; torsion; axial force; GSVATM; FEM
►▼ Show Figures 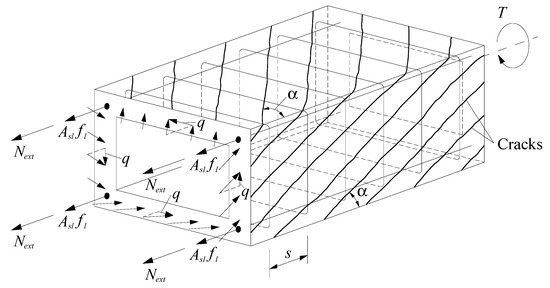