Correlations between Complexity and Entanglement in a One-Dimensional XY Model

The Einstein action for the gravitational field has some properties which make of it, after quantization, a rare prototype of systems with quantum configurations that do not have a classical analogue. Assuming spherical symmetry in order to reduce the effective dimensionality, we have performed a Monte Carlo simulation of the path integral with transition probability . Although this choice does not allow to reproduce the full dynamics, it does lead us to find a large ensemble of metric configurations having action by several magnitude orders. These vacuum fluctuations are strong deformations of the flat space metric (for which exactly). They exhibit a periodic polarization in the scalar curvature R. In the simulation we fix a length scale L and divide it into N sub-intervals. The continuum limit is investigated by increasing N up to ; the average squared action is found to scale as and thermalization of the algorithm occurs at a very low temperature (classical limit). This is in qualitative agreement with analytical results previously obtained for theories with stabilized conformal factor in the asymptotic safety scenario. View Full-Text
Keywords: quantum gravity; path integral; lattice field theory; Metropolis algorithm quantum gravity; path integral; lattice field theory; Metropolis algorithm
►▼ Show Figures 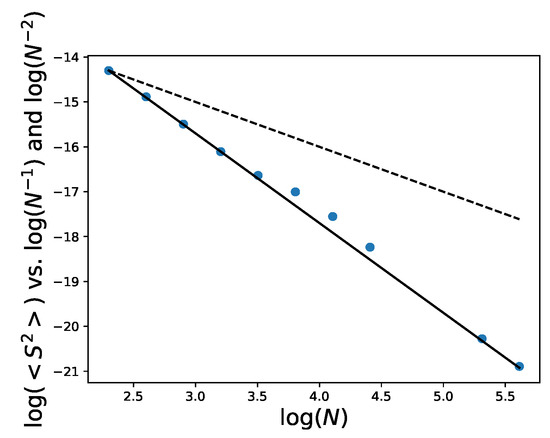