Hydrogen Peroxide as a Green Oxidant for the Selective Catalytic Oxidation of Benzylic and Heterocyclic Alcohols in Different Media: An Overview
Next Article in Special Issue

Polymorphism and cocrystallization are tools to add or enhance desirable properties of crystalline products [1,2,3]. The developments in this field in recent years have enabled more carefully tunable properties [4]. The tunability of the properties of (co)crystalline systems is of much importance, especially in the fields of pharmacy and medicine [5,6,7]. By introducing various coformers, factors like solubility, stability, bioavailability, or tolerability of active pharmaceutical ingredients can be influenced [8,9,10]. A better understanding of the driving force behind the genesis of molecular aggregation processes in the solid state can therefore be helpful to increase the efficiency of the synthesis of such crystalline products. Steed et al. have explained that asymmetry of crystalline structures can be exploited to purposefully produce medically relevant cocrystals [11]. While binary cocrystals have been focused on more commonly, less attention has been imposed on higher multicomponent systems like ternary [12], or even quaternary and quintenary [13] structures. In contrast to a well thought out stepwise multistage organic synthesis, a typical approach of a multicomponent crystal design starts with a retrosynthetic analysis of the target molecule followed by a one-pot reaction of all components in solution or solid state. To develop sophisticated and reliable protocols for multicomponent crystal syntheses, the complex modular assembly processes must be investigated by analysis of a hierarchy of intermolecular interactions and the molecular environment of involved components on each aggregation step [14].
In recent years, the group of Desiraju proposed that differing structural environments in the (n − 1)-multicomponent systems could lead to a state in which the incorporation of a new coformer would be more favourable for the overall structure [13]. Furthermore, Nangia and Bolla have confirmed that when using geometrically similar (in regards to size, planarity, etc.) heterosynthons, the formation of multicomponent crystals could simply be predicted by the strongest hydrogen bond former interactions, showing the importance of the kinetic effect [15]. Results presented by Aakeröy and Gunawardana also lay an emphasis on the geometric environment of (n − 1)-crystal systems as crucial for the formation of higher component products [16].
Hence, in this contribution, in contrast to a one-pot synthesis, the controlled stepwise syntheses of a selected crystalline ternary multicomponent system is presented. The mechanism of the formation of multicomponent cocrystals could be figured out based on the analysis of molecular arrangement in solid state of the selected components. The binary cocrystals as well as the final resulting ternary multicomponent system were characterized by X-ray analysis.
For this, 2-methylresorcinol (MRS) formation capabilities in conjunction with the N-bases tetramethylpyrazine (TMP) and 1,2-bis(4-pyridyl)ethane (BPE) (Scheme 1) were investigated, using neat, drop-, or liquid-assisted grinding techniques. Additionally, sequential and one-pot reactions were performed. The obtained crystalline products were characterized using Powder X-ray Diffraction (PXRD) and single crystal structure analysis.

The crystalline product obtained by liquid-assisted grinding of a mixture of A, B, and C in the presence of THF shows reflections in the PXRD that cannot be attributed to the educts. The crystalline product was dissolved in nitromethane, and by cooling crystallization a single crystal was obtained (Table 1). The X-ray structure analysis confirms the successful crystallization of a ternary 2:2:1 A:B:C multicomponent system 1 (Figure 2).
The central 1,2-bis(4-pyridyl)ethane building block C forms hydrogen bonds via its two aromatic nitrogen centers to hydroxy groups from each of the two neighbouring 2-methylresorcinol molecules A. The remaining hydroxy groups of A coordinate via hydrogen bonds to one nitrogen center each of the two terminal tetramethylprazine molecules. Surprisingly, the second nitrogen centers of B are not involved in any further intermolecular interactions. Consequently, the 2:2:1 A:B:C multicomponent system 1 does not form infinite chains. This behavior is observed for B in only few selected multicomponent systems. Examples are cocrystalline systems with Br-C6F4-OH12 or Br-C6F4-COOH12 [16]. The analysis of the coordination behavior of A shows that the hydrogen bonds from A to B, in comparison to A to C, have no significant differences in the distances O…N 2750 Å and O…N 2755 Å as well as in the angles of the ring planes A:B 75° and A:C 69°.
As mentioned, the geometric environment of the involved building blocks and their intermolecular interactions are crucial parameters for the formation of higher multicomponent crystals. The one-pot reaction of all components (A, B, and C) leads to the ternary 2A:2B:C system 1. The 2A:2B:C motif is discretely isolated by the unusual coordination behavior of the tailored B molecules. The hypothesis is that the geometric molecular environment is responsible in each aggregation step in the design of 1. Based on differing structural environments in the crystalline products obtained by first aggregation steps, A with B and A with C, the crystal packing of 2A:2B:C—starting from A—can be built up by successive substitution of B by C or C by B. To investigate this hypothesis and to gain a deeper understanding of the formation of the multicomponent system, the cocrystals involving A and B as well A and C were crystallized and the crystal packing analyzed.
Cocrystals of 2 (A:2B) and 3 (A:C) could be obtained by grinding a 1:2 ratio (2) and 1:1 ratio (3). After that, suitable single crystals for XRD were formed after recrystallization of the crystalline powder from THF (2) and nitromethane (3). In contrast to the known crystal structure of the A:B cocrystal [8], the crystal structure of 2 represents a 2:1 cocrystal with one A and two B molecules (Figure 3). Due to the fact that the two molecules of B in 2 show explicit different structural environments, the description A:B:B’ seems more appropriate for this system. The central A unit forms chains via hydrogen bonds (O1…N1 2.84 Å, O2…N2 2.85 Å) to two neighbouring B molecules. While the D distances of the hydrogen bonds are practically identical, the dihedral angles between the planes of the arene ring of A and the neighboring pyrazine rings of B show slight variations (62°/68°). Additionally, present B’ molecules form columns with B by π-π stacking interactions. A comparison of the intermolecular potentials in the molecular arrangement of 2 pointed out the dominating role of the π-π stacking motif (−42 and −43 kJ/mol) in contrast to the described hydrogen bonds (−32 and −33 kJ/mol).
The crystal structure 3 is built up by chains of linked 1:1 A:C cocrystals (Figure 4). Both hydroxyl groups of the central A molecule form hydrogen bonds to nitrogen centers of the two neighbouring C molecules. A comparison of both hydrogen bonds that indicates slight differences is be remarkable. In contrast to the hydrogen bond O1-H1…N1, O2-H2…N2 shows enlarged covalent O1-H2 and O2…N2 hydrogen bonds. Besides the slightly different hydrogen bonds to 2, differences in dihedral angles between the planes of the arene ring of A and the neighboring pyridyl rings of B are observed (68°/75°).

If the formation of the described ternary multicomponent crystal 1 in a one-pot-synthesis is due to the different environments during the molecular recognition of A, B, and C in the crystallization process, 1 should also be synthesizable from the cocrystals 2 and 3. In both cocrystals (2 and 3), the building block A shows significant differences in the molecular environment (Figure 5). In order to verify the assumption, appropriate crystallization experiments were carried out. Cocrystal 2 was grinded with C, and cocrystal 3 was grinded with B. Additionally, a physical mixture of B and C was grinded with A. The powder diffractograms of all three crystallization experiments show exclusively the reflections of the expected ternary multicomponent system 1. It seems, when attempting to design a multicomponent crystal of nth degree, it is helpful to take a closer look at the (n − 1)th degree predecessors.
The hypothesis that differences in the molecular environment during the molecular recognition in the crystallization process are responsible for the formation of multicomponent crystal has been demonstrated in this study by using the building blocks 2-methylresorcinol (A), tetramethylpyrazine B and 1,2-bis(4- pyridyl)ethane C. The carefully designed cocrystals 2 (A:2B) and 3 (A:C) with differences in their molecular environment are suitable starting materials for successfully synthesizing the ternary multicomponent crystal 1 (2A:2B:C). Furthermore, the results indicate that Ostwald’s rule of stages can be applied to solid state synthesis just as well as it can be applied to crystallization from solution.

This research was supported by the DFG Open Access Publication Funds of the Ruhr-Universität Bochum. 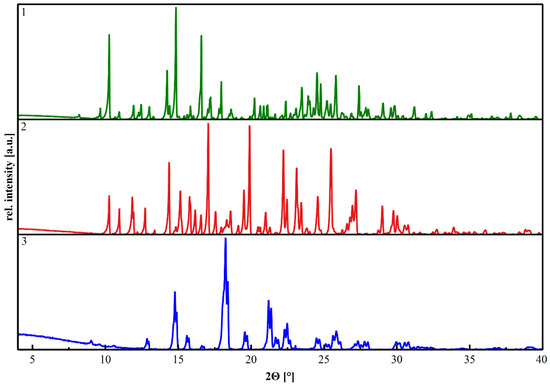 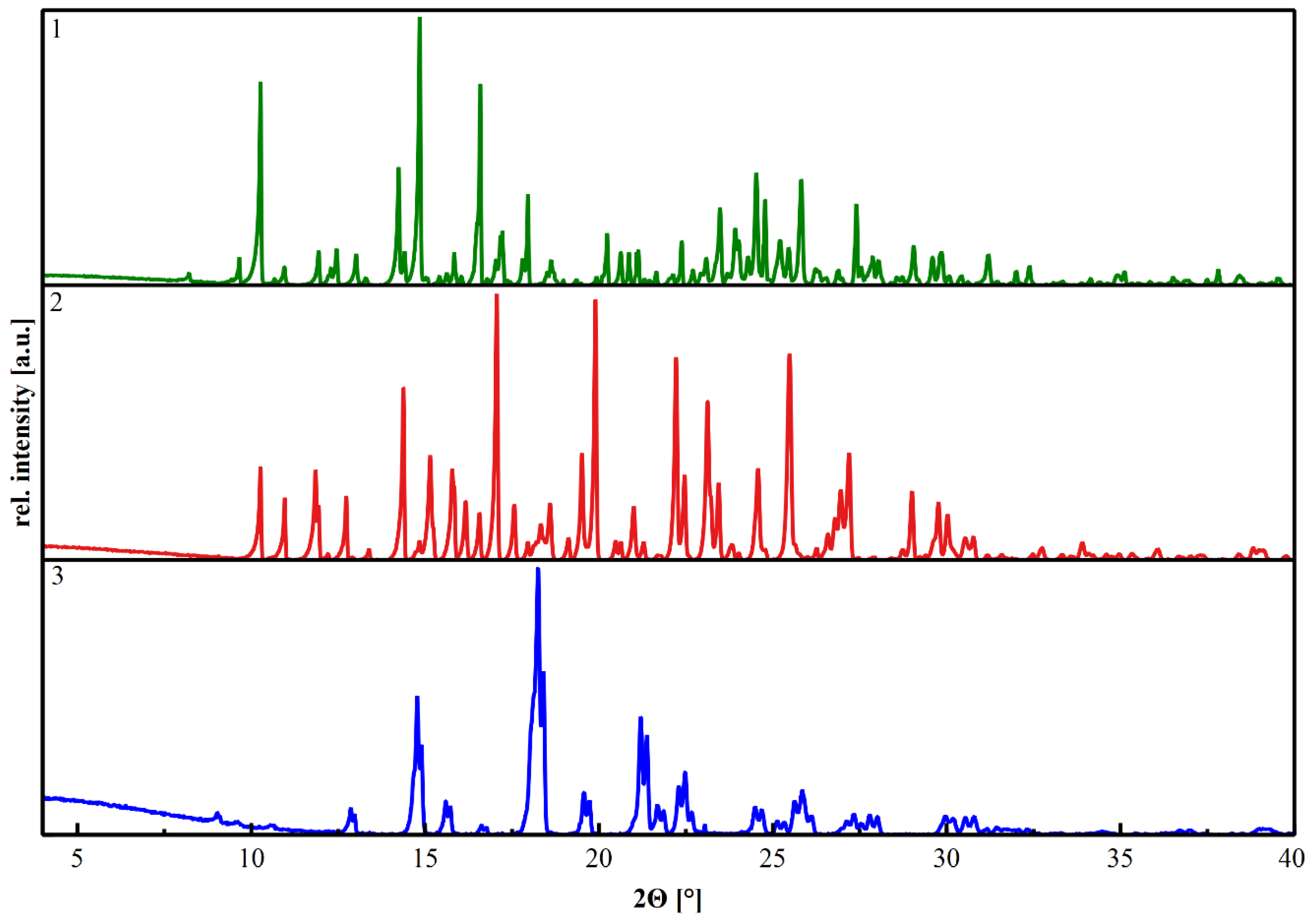