Synthesis of Graphene Nanoribbons–Hydroxyapatite Nanocomposite Applicable in Biomedicine and Theranostics

Hydroxyapatite (HA, a member of the calcium phosphate family) has poor mechanical properties. The most important of these properties are low fracture toughness (fracture toughness of less than 1 MPa.m0.5), intrinsic brittleness, poor tensile strength, and weak wear resistance [1,2,3,4]. However, despite these poor mechanical properties, HA has excellent biological properties, including bone bonding ability, excellent biocompatibility, highly compatible with living bone tissues, scaffolding properties, and osteoconductive properties [5,6,7,8,9,10]. These properties have made HA widely used in biomedical applications. Therefore, many methods have been employed to synthesize this bioceramic, such as combustion preparation, electrochemical deposition, hydrolysis, precipitation, sputtering, multiple emulsion, solid-state reaction, biomimetic deposition, solvothermal method, sol–gel, and hydrothermal process [11,12,13,14,15,16,17,18,19,20,21,22,23], which have led to diverse morphologies such as ribbons, rods, wires, and tubes [24,25,26,27,28,29]. However, to eliminate mechanical weaknesses, researchers have used different reinforcing materials. Among the materials used, carbon nanomaterials such as carbon nanotubes (CNTs), graphene, graphene oxide, and graphene nanoribbons (GNRs) have received more attention than others [30,31,32]. The most important reason is the biocompatibility and high mechanical properties of these materials. Graphene with honeycomb structure, excellent mechanical properties, and high specific surface area has been studied more than carbon nanotubes [33,34,35,36,37,38].
The results of investigations showed that the addition of graphene sheets to HA greatly improved its mechanical and biological properties [39,40]. However, the excessive addition of graphene sheets has reduced the mechanical properties, because graphene sheets fold up and prevent high relative densities [41]. One way to control this weakness is to use GNRs instead of graphene sheets. GNRs have been used in some research to enhance the properties of HA. GNRs are synthesized in various ways. One of these methods is the use of carbon nanotubes. Unzipping CNTs create GNRs [42]. However, for the use of carbon nanomaterials as a reinforcement phase, the surface of these materials must contain chemical agents, such as graphene oxide surface. Published research has also used materials such as graphene oxide. Graphene oxide is reduced by methods such as the hydrothermal process, and its mechanical properties are improved [43,44]. Unzipping the CNTs chemically also makes graphene oxide nanoribbons (GONRs) [42].
One of the best methods for the synthesis of hybrid powders containing HA is hydrothermal (solvothermal) process. In this method, the precursor containing the calcium ions is first added to the solution containing carbon nanomaterials. The solution containing phosphate ions is then added to the previous solution. In this way, calcium phosphate powders precipitate as white powders. These powders are then transferred to a hydrothermal autoclave and the process is performed. During the hydrothermal process, these primary powders dissolve at high temperatures and begin nucleation and growth of HA. Nucleation of HA crystals is formed on the surface agents of carbon nanomaterials by van der Waals forces [40,43,44]. In some published studies, ultrasound operations have been used to reduce the particles size of the synthesized HA [45]. For hydrothermal process, reducing the size of the initial powders by ultrasound effects will cause them to dissolve more rapidly in the hydrothermal process, increasing the reaction kinetics and enhancing the quality of the final powders.
Based on the above, in this study, GNRs were used to enhance the mechanical properties of HA. GONRs have been used for this purpose. For the synthesis of hybrid powders, the hydrothermal method under hydrogen gas pressure has been used. To improve the properties of the synthesized powders, ultrasound operations have been used. The synthesized powders were sintered by spark plasma sintering (SPS) method. Synthesized powders and consolidated samples were characterized by various methods, including X-ray diffraction (XRD), Raman spectroscopy, high-resolution transmission electron microscopy (HR-TEM), and Vickers indentation technique. So far, a lot of research has been done on the applications of HA and graphene materials in the field of theranostics, which confirms the capabilities of these materials in this field [46,47,48,49,50,51]. Given that each phase of the nanocomposite has the potential to be used in biomaterials and theranostics, the synthesized nanocomposite is expected to be usable in biological and theranostic applications.

The primary chemicals used in this study, along with their specifications, are presented in Table 1. The specifications of the CNTs, the materials used in the GONRs synthesis section, and the results obtained are exactly the same as the reference used [42]. The initial solution (S1) was first prepared (DI water + DEG+ DMF+ anhydrous ethanol with a volume ratio of 40:20:20:20), and the following steps were performed in order. 4.7 g of calcium nitrate tetrahydrate in 120 mL of S1 was added dropwise to a 20 mL stirred suspension of GONR (3.13 mg/mL) (HA/0.5% rGONR) with stirring continued for 1 h.1.56 g of diammonium hydrogenphosphate in 80 mL of S1 was dropwise added to the solution, and the pH of the resulted solution was adjusted to >10 with ammonium solution.The suspension was sonicated for 1h (Irradiation power of 140W, A QSONICAQ700 sonicator with a maximum power output of 700W was employed for the ultrasonic irradiation).The resulting solution was poured into the Teflon (PTFE) vessel and transferred to the autoclave. The solvothermal process was carried out for 5 h at 180 °C by injection of hydrogen gas at 10 bar (the volume of the PTFE container was 340 mL and the total pressure was 23 bar). The powders were dried at oven for 12 h at 60 °C. After drying and ball milling (250 rpm, 12 h), the powders were consolidated via SPS.To compare the effect of reduced GONR on the final properties, a pure HA powders sample was synthesized under similar conditions.

As previously reported [52], sintering of the powders was performed at 950 °C. The biocompatibility assays were performed exactly similar to the previous report [52]. The Archimedes method was used to calculate the relative density of sintered samples (ASTM C373-88).

Grindosonic tester with a Vickers tip was conducted on the polished surfaces of samples at a maximum load of 300 mN (ramp dwell time of 10 s). Nine tests were performed at different locations of each sample. Elastic modulus and hardness were calculated from the load-displacement curves using Olive–Pharr method [53]. Figure 1 shows load-displacement diagram, load-time, contact depth-time diagrams, indentation affected zone, and contact depth profile for this test. The results were statistically evaluated by the Kernel Density Estimation method [54,55].

Diamond 3.2 and Imagej 1.52d softwares were used in this study. Different evaluation methods have been used in this research, some of which are described below. The other instruments used to characterize the samples include inductively coupled plasma (ICP) (DV7300, Optima Co.), and portable scanning electron microscope (SEM, TM-1000).

XRDwas used to determine the phase constituents of the samples (X’ Pert Pro, Panalytical Co., contained a detector Cu Kα radiation, λ = 1.5406 Å, 40 kV, 40 mA, 2 theta scanning range from 10° up to 80° in steps of 0.02°). Equation (1) was used to estimate the crystallinity of HA (Xc) [56]. where ν(112/300) and I300 are the intensity of the hollow between diffraction peaks of HA in the planes (300) and (112) and the intensity of the peak of HA in the plane (300), respectively. Equation (2) was used to calculate the crystallite size (Williamson–Hall method) [57].
In this equation, d, θ, and λ are grain size, Bragg diffraction angle, and wave length of used X-ray (Cu), respectively. β and ε are full width at half height (FWHM), and crystalline lattice strain, respectively.

FESEM (Hitachi, Düsseldorf, Germany, S4700 equipped with energy dispersive X-ray spectroscopy) was used to observe the morphology of the samples (mounted in an adhesive carbon film and Au coated by sputtering for its observation).

Renishaw inVia (Wotton-under-Edge, UK) spectrometer was used in the range of 300–3500 cm−1, recording five times for 10 s of each accumulation, with a wavelength of 532 nm, green laser line that had been excited from an argon ion laser in a backscattering configuration using a microscope with a 100× objective, 100% power (an acquisition time of 10 s). An optical microscope was used with the Raman spectrometer. In order to remove the fluorescence background, the samples were subjected on Al foil.

The findings of this study showed that the final powders synthesized by solvothermal method had a calcium-to-phosphate ratio of about 1.67. In biological experiments, the difference of HA effect in comparison with rGONR-HA was not significant. The results of this study would be appropriate for biomedicine use of this nanocomposite. By adding a small amount of graphene nanoribbon (0.5%W), elastic modulus and hardness of hydroxyapatite increased dramatically. GNRs have increased the samples’ fracture toughness with GNR pull-out and GNR bridging mechanisms. According to the HRTEM findings, (300) planes are likely in contact with the surface of GNR. Density calculations from the Archimedes method showed that GNR-HA nanocomposite and pure HA reached to relative densities of 97.11% and 98.3%, respectively. The results of mechanical analysis showed that in some parts of the nanocomposite, the hardness reached above 9 GPa and the elastic modulus reached above 140 GPa. 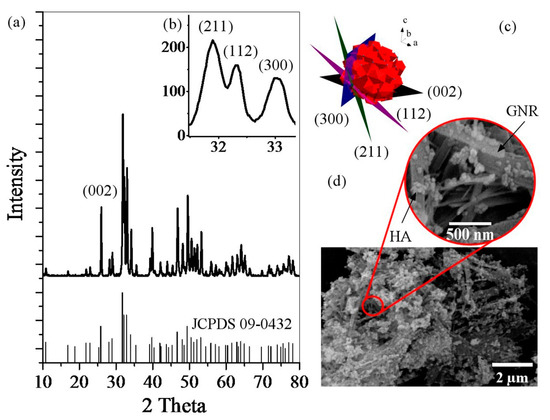 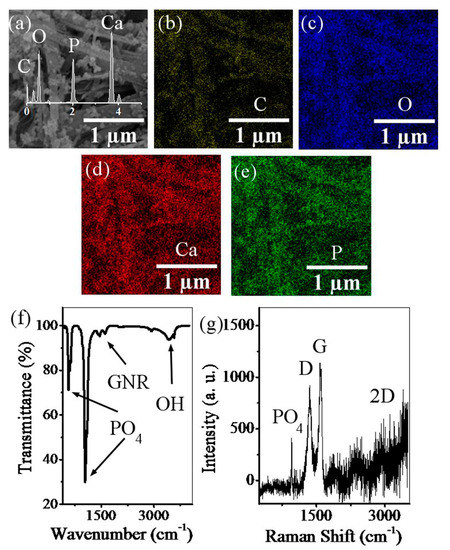 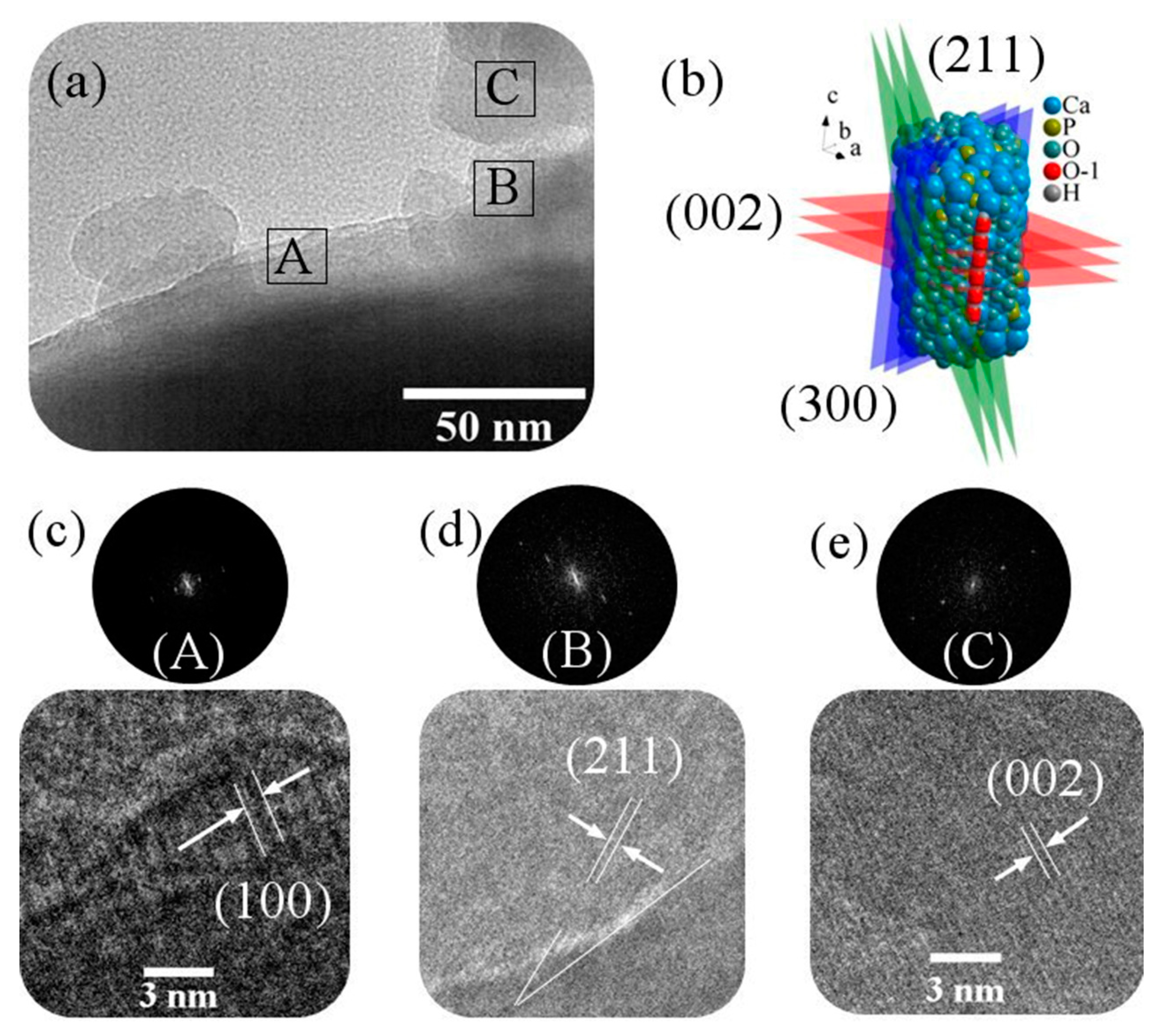 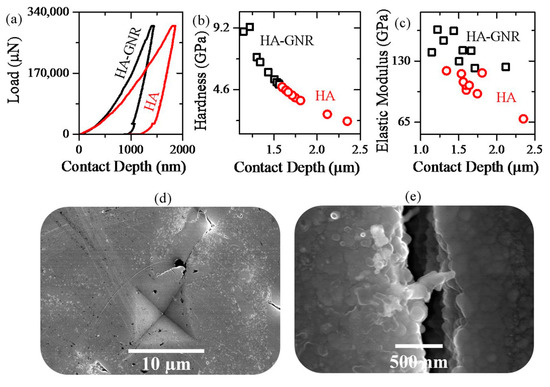 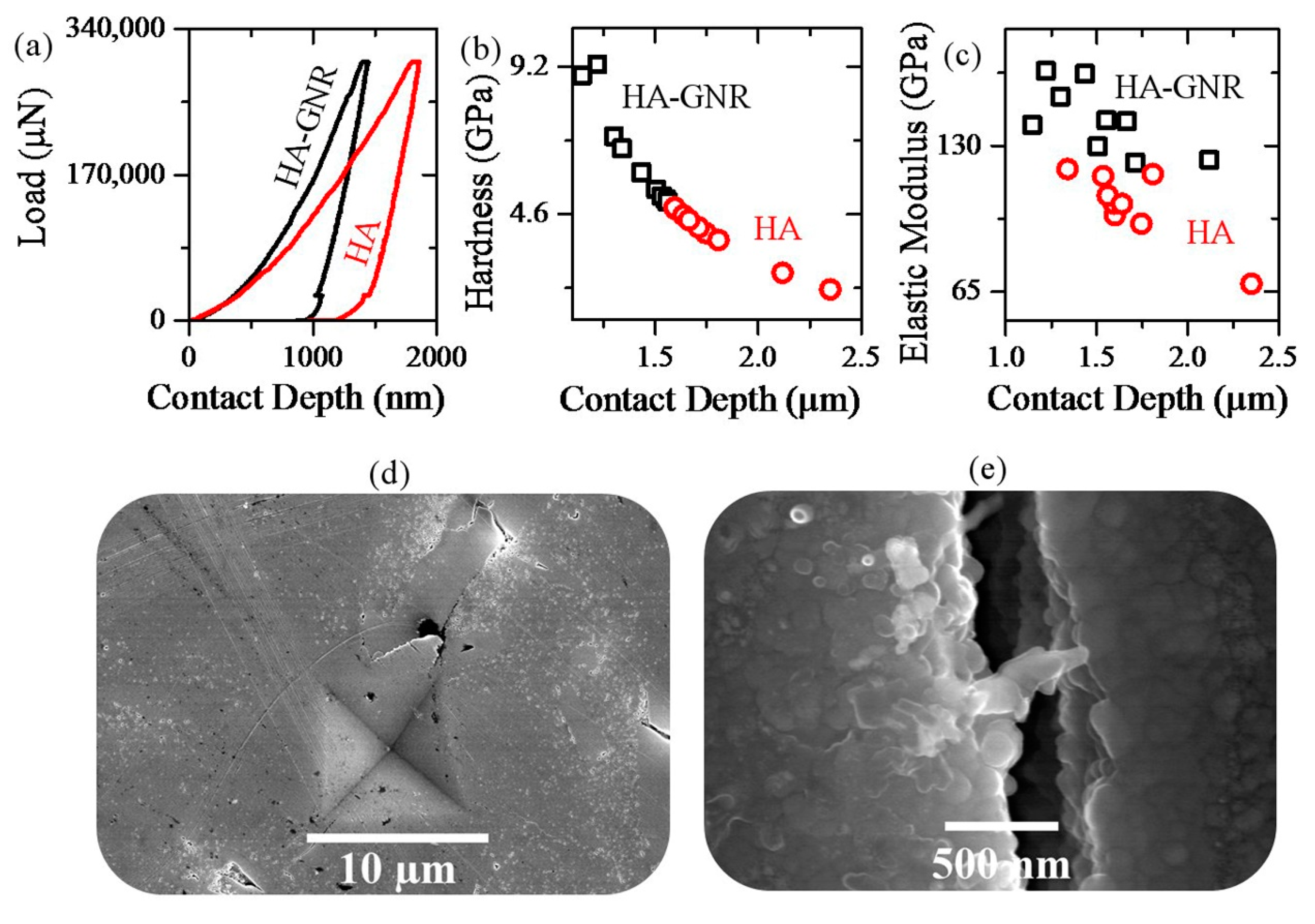 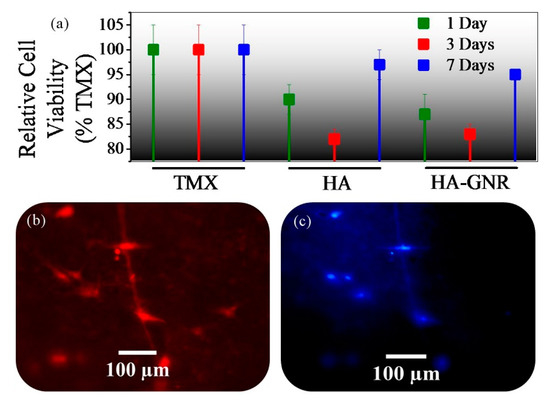