Co3O4 Nanopetals on Si as Photoanodes for the Oxidation of Organics

Electrodeposition of Pb on Au has been of interest for the variety of surface phenomena such as the UnderPotential Deposition (UPD) and surface alloying. Here, we examined the interface between the electrodeposited Pb film on Au, using surface sensitive techniques such as X-ray Photoelectron Spectroscopy (XPS), Ultraviolet Photoelectron Spectroscopy (UPS), Energy-Filtered Photoemission Electron Microscopy (EF-PEEM) and Work Function (WF) mapping. The initially electrodeposited Pb overlayer (~4 ML equivalent thickness) was transferred from the electrochemical cell to the UHV system. The deposited Pb layer was subjected to Argon sputtering cycles to remove oxide formed due to air exposure and gradually thinned down to a monolayer level. Surface science acquisitions showed the existence of a mixed oxide/metallic Pb overlayer at the monolayer level that transformed to a metallic Pb upon high temperature annealing (380 °C for 1 h) and measured changes of the electronic interaction that can be explained by Pb/Au surface alloy formation. The results show the electronic interaction between metallic Pb and Au is different from the interaction of Au with the PbO and Pb/PbO mixed layer; the oxide interface is less strained so the surface stress driven mixing between Au is not favored. The work illustrates applications of highly surface sensitive methods in the characterization of the surface alloy systems that can be extended to other complex and ultrathin mixed-metallic systems (designed or spontaneously formed). View Full-Text
Keywords: Lead OPD; surface alloy; XPS; UPS; EF-PEEM Lead OPD; surface alloy; XPS; UPS; EF-PEEM
►▼ Show Figures 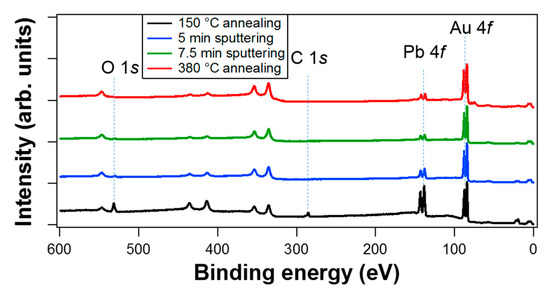