On both sides of the Veil of Manoppello, made with very thin linen, translucent linen threads, probably starched, a Holy Face of Jesus Christ is visible. During the centuries, the yellowing of the linen threads has changed the aspect of the original face, in particular producing unnatural colours of the eyes. Indeed, as inferred by some experimental evidences, both on a microscopic and a macroscopic scale, the eyes were probably originally blue. Blue was the colour mainly affected by the yellowing of the linen threads, leading to greenish shades not compatible with human irises’ colours. Thus, we think that this finding compelled an artist to retouch the eyes’ irises with brown colour. The theoretical analysis of degradation times of the cellulose contained in starched linen indicates that, at ambient temperature, the yellowing takes about ten centuries to reach 95% of its maximum. Due to its peculiar optical characteristics and historical vicissitudes, the Veil of Manoppello likely coincides with the Veronica’s Veil, the alleged relic of the face of Christ impressed during his Passion, just before his crucifixion. If the Manoppello and Veronica’s Veils are the same object, any hypothesized colour retouch was done just before its first known public procession and exhibition in Rome, i.e., before the year 1200, after ten centuries of yellowing. Therefore, the Veil of Manoppello could be very ancient, even of the Roman epoch. View Full-Text
Keywords: Veil of Manoppello; Veronica’s Veil; Jesus Christ iconography; linen yellowing; cellulose degradation Veil of Manoppello; Veronica’s Veil; Jesus Christ iconography; linen yellowing; cellulose degradation
►▼ Show Figures 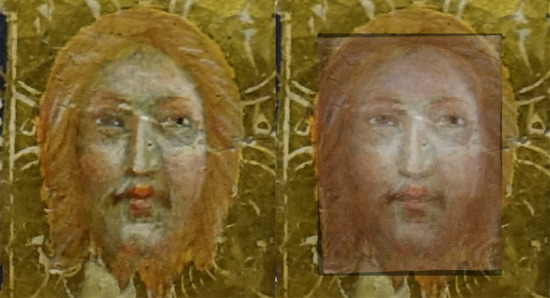