A Usable and People-Friendly Cultural Heritage: MAGNA Project, on the Route from Greece to Magna Graecia
Next Article in Special Issue

Bombed Archaeology: Towards a Precise Identification and a Safe Management of WWII’s Dangerous Unexploded Bombs
Previous Article in Journal

New and Emerging Challenges to Heritage and Well-Being: A Critical Review
Previous Article in Special Issue

Searching for the History of the Ancient Basilicata: Archaeogeophysics Applied to the Roman Site of Forentum

Corvin Castle, located in Hunedoara County (Transylvania), is an important Romanian cultural site. Originally, a fort constructed in the 14th century, it was first converted into a castle by Ioan de Hunedoara in the 15th century, frequently changing owners (with significant construction in the 15th and 17th centuries) until it was abandoned in the mid-19th century. After undergoing various ill-fated reconstruction efforts in the late 19th century, the castle reopened in the 1950s when the Romanian government renewed its interest in cultural sites and undertook a series of sparsely-documented archaeological investigations and conservation projects. Presently, restoration efforts require renewed investigation of Corvin Castle’s construction and history. Ground penetrating radar (GPR) is a promising tool for investigating the construction phases of heritage structures like Corvin Castle, where invasive methods are inappropriate and extensive historical modification has left incomplete records. In 2017, a comprehensive GPR survey of the castle was conducted. The survey recognizes features mentioned in texts, discovers previously unknown constructions, locates areas of moisture ingress around the courtyard, and identifies the extent and composition of the building foundations. Information gained from these scans, especially combined with printed sources, is an asset in planning restoration efforts and understanding the effects of past modifications. View Full-Text
Keywords: GPR; cultural heritage; CRM; nondestructive testing; Hunedoara Castle; Hunyadi Castle; Corvin Castle; Castelul Corvinilor; Vajdahunyad GPR; cultural heritage; CRM; nondestructive testing; Hunedoara Castle; Hunyadi Castle; Corvin Castle; Castelul Corvinilor; Vajdahunyad
►▼ Show Figures 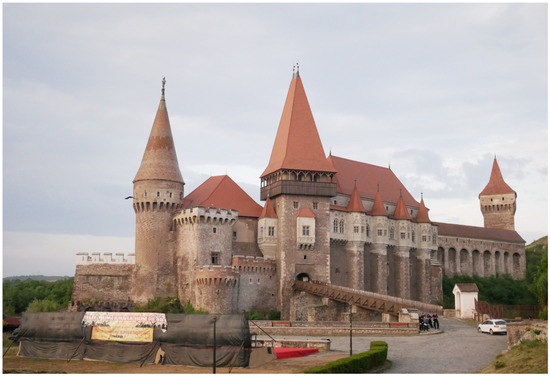