Atlantis: A Grain of Truth Behind the Fiction?

The legend of Atlantis was almost certainly invented by Plato to promote the political ideal of his masterwork The Republic, while praising the heroism of his own ancestors. This paper suggests that, in assembling the story, Plato might have reworked the myth of the foundation of Egypt—attributed to divine invaders bringing agriculture and unknown technologies to the country—and popularized in Greece through the writings of Herodotus. The key issue explored is the curious coincidence between the period of the alleged foundation of Egypt (according to traditional Egyptian sources) and some remarkable events that characterized the end of the Ice Age. Indeed, besides the sudden increase in temperature and the consequent rise in sea level, the period was also marked by the birth of agriculture and the appearance of totally new technologies in diverse Near Eastern locations. The memory of these events would have been handed down through the myth of the foundation of Egypt, and through this, to Greek culture, enabling Plato to exaggerate the antiquity of his noble ancestors, while embellishing the characteristics of the invaders. Such occasional technological leaps may also have occurred elsewhere in the world, for instance on the deltas of the Indus or the Yangtze, driven by the same change in climate that affected the whole planet. Although today there is no archaeological evidence of such events besides in the Near East, the article suggests that the possible discovery of obsidian in a submerged site would be a strong indication of a local technological leap. To this end it examines, as a Mediterranean example, some flooded islands in the Strait of Sicily, which, lying on the route to Pantelleria, may retain traces of ancient obsidian exploitation. View Full-Text
Keywords: Atlantis; End of the Ice Age; Origin of agriculture; Obsidian; Pantelleria; Plato Atlantis; End of the Ice Age; Origin of agriculture; Obsidian; Pantelleria; Plato
►▼ Show Figures 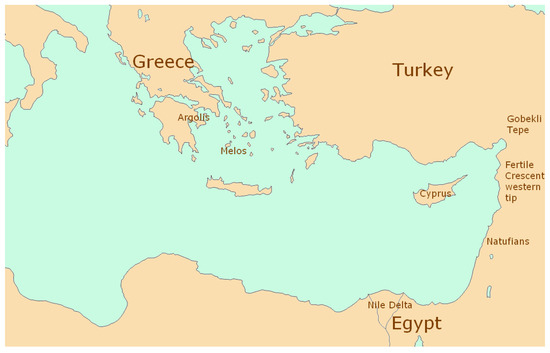