Taurine, which is abundant in mammalian tissues, especially in the heart, is essential for cellular osmoregulation. We previously reported that taurine deficiency leads to changes in the levels of several metabolites, suggesting that alterations in those metabolites might compensate in part for tissue taurine loss, a process that would be important in maintaining cardiac homeostasis. In this study, we investigated the molecular basis for changes in the metabolite profile of a taurine-deficient heart using pathway analysis based on the transcriptome and metabolome profile in the hearts of taurine transporter knockout mice (TauTKO mice), which have been reported by us. First, the genes associated with transport activity, such as the solute carrier (SLC) family, are increased in TauTKO mice, while the established transporters for metabolites that are elevated in the TauTKO heart, such as betaine and carnitine, are not altered by taurine deficiency. Second, the integrated analysis using transcriptome and metabolome data revealed significant increases and/or decreases in the genes involved in Arginine metabolism, Ketone body degradation, Glycerophospholipid metabolism, and Fatty acid metabolism in the KEGG pathway database. In conclusion, these pathway analyses revealed genetic compensatory mechanisms involved in the control of the metabolome profile of the taurine-deficient heart. View Full-Text
Keywords: taurine; osmoregulation; metabolomics; transcriptomics; pathway analysis taurine; osmoregulation; metabolomics; transcriptomics; pathway analysis
►▼ Show Figures 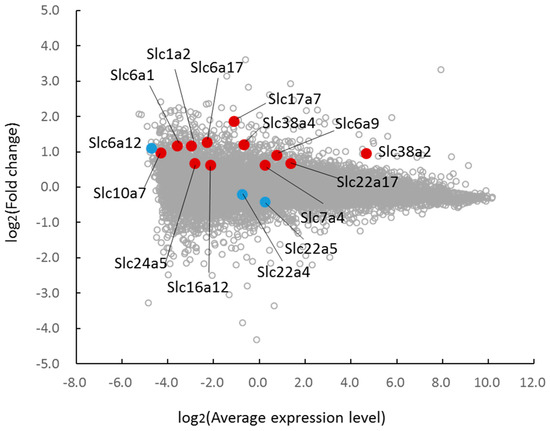 
Ito, Takashi, Shigeru Murakami, and Stephen Schaffer. 2018. "Pathway Analysis of a Transcriptome and Metabolite Profile to Elucidate a Compensatory Mechanism for Taurine Deficiency in the Heart of Taurine Transporter Knockout Mice" J 1, no. 1: 57-70. https://doi.org/10.3390/j1010007