Is There Anybody Out There? Substrate Availability Controls Microbial Activity outside of Hotspots in Subsoils
Next Article in Special Issue

Speciation and Mobility of Mercury in Soils Contaminated by Legacy Emissions from a Chemical Factory in the Rhône Valley in Canton of Valais, Switzerland
Previous Article in Journal

Deciphering and Predicting Microscale Controls on Radon Production in Soils, Sediments and Rock

Release and Biomethylation of Antimony in Shooting Range Soils upon Flooding

Antimony (Sb) is an understudied pollutant with potentially toxic effects at particularly low concentrations. The fate of Sb in the environment is complicated because of its many chemical forms at varying oxidation states. Here, we validated an extraction method and an analytical technique to quantify inorganic and methylated Sb in bulk soil and soil solution. We identified and quantified trimethylantimony (TMSb) in shooting range soils for the first time, up to a concentration of 1.35 mg kg−1. Then, we evaluated the release of Sb species from soil to soil solution as well as the influence of manure addition upon flooding in an incubation experiment with fresh soils from shooting ranges. This incubation experiment showed an immediate and exhaustive Sb release into the soil solution (within 6 h), reaching over 3000 μg L−1 for one site, followed by a sharp decline and again a slow increase at the end of the incubation in Sb concentrations in the soil solution for two of the three sites. TMSb was also formed in the soil solution after 4 to 10 days. High dissolved organic carbon (DOC) concentrations and the dissolution of Fe- and Mn-(oxy-)hydroxides were the main drivers of Sb release, while the addition of organic matter (OM) drove TMSb formation. View Full-Text
Keywords: antimony; trimethylantimony; biomethylation; shooting range; HPLC–ICP–MS; mobility antimony; trimethylantimony; biomethylation; shooting range; HPLC–ICP–MS; mobility
►▼ Show Figures 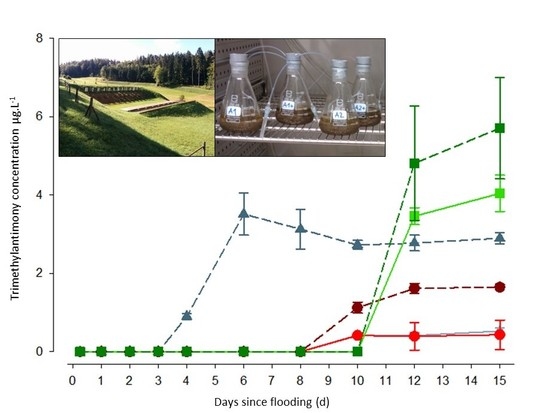