Acknowledgement to Reviewers of Reports in 2018

Neonatal hearing loss is one of the most common anomalies and is frequently associated with delivery problems. The effects of growth hormone (GH) on brain regeneration after an injury are well known. This paper looks at a male child diagnosed with cerebral palsy, psychomotor affectation, left spastic hemiparesis, and bilateral sensorineural hearing loss after fetal distress due to ruptured membranes before the delivery of more than 30 hours of evolution and several episodes of severe hypoglycemia. From 3.5 months of age, we treated him with GH (0.04 mg/kg/day), Melatonin (5 mg/day and 6 months later 10 mg/day) and rehabilitation, for a period of 14 months; at discharge, the child fully recovered all the disabilities produced by his cerebral palsy, including normal hearing; GMFM-88 increased from 7.84% to 48.23%; Battelle scores increased from 2 to 9 after 7 months of treatment, and to 30, 1 year after discharge. Most likely hearing loss was recovered due to the effect of GH on the production of hair cells from stem cells (only present in very young children) in the cochlear sensory epithelium. This is the first case of recovery of hearing loss in humans after GH administration. Moreover, GH administration is useful and safe for early treatment of cerebral palsy. View Full-Text
Keywords: hearing loss; cerebral palsy; growth hormone; auditory stimulation; physiotherapy hearing loss; cerebral palsy; growth hormone; auditory stimulation; physiotherapy
►▼ Show Figures 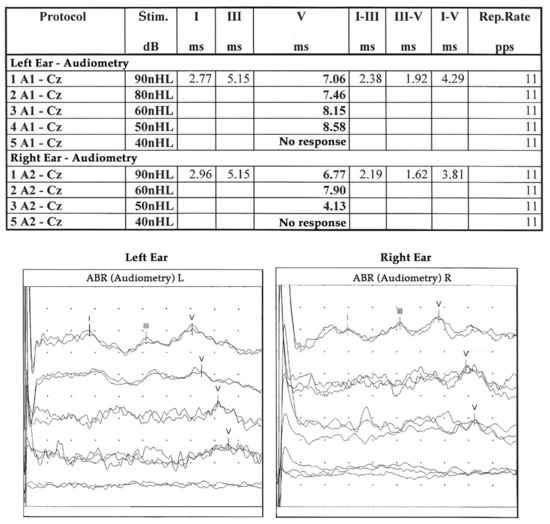