An Optimization-Based Framework for Nonlinear Model Selection and Identification

This paper proposes an optimization-based framework to determine the type of nonlinear model present and identify its parameters. The objective in this optimization problem is to identify the parameters of a nonlinear model by minimizing the differences between the experimental and analytical responses at the measured coordinates of the nonlinear structure. The application of the method is demonstrated on a clamped beam subjected to a nonlinear electromagnetic force. In the proposed method, the assumption is that the form of nonlinear force is not known. For this reason, one may assume that any nonlinear force can be described using a Taylor series expansion. In this paper, four different possible nonlinear forms are assumed to model the electromagnetic force. The parameters of these four nonlinear models are identified from experimental data obtained from a series of stepped-sine vibration tests with constant acceleration base excitation. It is found that a nonlinear model consisting of linear damping and linear, quadratic, cubic, and fifth order stiffness provides excellent agreement between the predicted responses and the corresponding measured responses. It is also shown that adding a quadratic nonlinear damping does not lead to a significant improvement in the results. View Full-Text
Keywords: nonlinear identification; experimental study; nonlinear model updating nonlinear identification; experimental study; nonlinear model updating
►▼ Show Figures 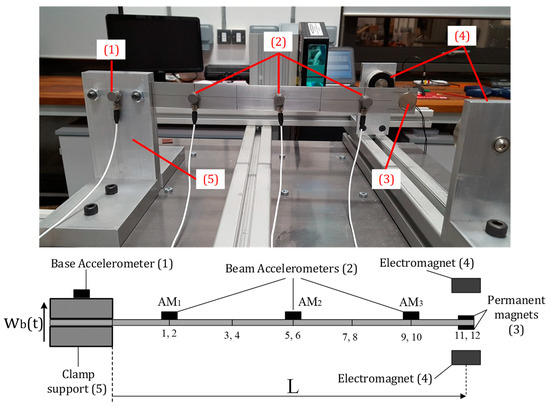