Facing Change through Diversity: Resilience and Diversification of Plant Management Strategies during the Mid to Late Holocene Transition at the Monte Castelo Shellmound, SW Amazonia
Previous Article in Journal

We hypothesize that megafauna extinctions throughout the Pleistocene, that led to a progressive decline in large prey availability, were a primary selecting agent in key evolutionary and cultural changes in human prehistory. The Pleistocene human past is characterized by a series of transformations that include the evolution of new physiological traits and the adoption, assimilation, and replacement of cultural and behavioral patterns. Some changes, such as brain expansion, use of fire, developments in stone-tool technologies, or the scale of resource intensification, were uncharacteristically progressive. We previously hypothesized that humans specialized in acquiring large prey because of their higher foraging efficiency, high biomass density, higher fat content, and the use of less complex tools for their acquisition. Here, we argue that the need to mitigate the additional energetic cost of acquiring progressively smaller prey may have been an ecological selecting agent in fundamental adaptive modes demonstrated in the Paleolithic archaeological record. We describe several potential associations between prey size decline and specific evolutionary and cultural changes that might have been driven by the need to adapt to increased energetic demands while hunting and processing smaller and smaller game. View Full-Text
Keywords: human evolution; megafauna extinction; fat; domestication; human brain expansion; Paleolithic human evolution; megafauna extinction; fat; domestication; human brain expansion; Paleolithic
►▼ Show Figures 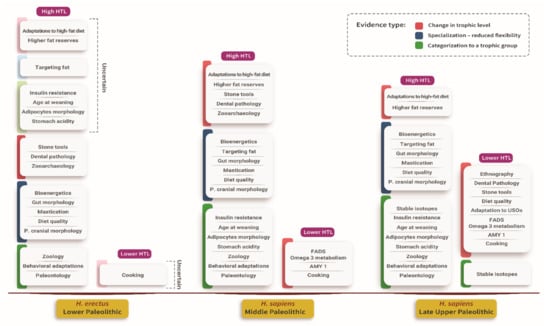