The tests performed allow conclusions about the effects of the integrated thermoplastic films on the matrix tensile strength, adhesion strength under shear load, peel strength and damage tolerance of fiber composite laminates. The error bars in all diagrams shown throughout the following indicate the respective confidence interval for an assumed Gosset distribution.
The tensile tests show no significant differences between the tensile strengths with and without the embedded thermoplastic films. Evenly integrated film strips and the associated edges have no significant influence on the matrix tensile strength. The nonsignificance can be observed in Figure 7 on the basis of the overlapping of the confidence intervals. Taking into account an alpha error correction from the significance level 5% to 0.57% because of multiple comparisons, the nonsignificance of the differences can also be shown in a pairwise comparison with the reference sample in two sample t-tests.
Figure 8 shows the influences of the pure thermoplastic film, the gold coating and integrated film stripes on the interlaminar shear strength (ILSS). When considering the influence of the film material, it is shown that PEI and PES do not result in a significant reduction of ILSS. In tendency the PEI and PES films seem to slightly improve the ILSS, but a statistical significance cannot be proven. For films made of PA6, a small but significant reduction of the interlaminar shear strength is observed.
The samples with full-surface film with gold coating show a considerable reduction and strong scattering in the measured ILSS. To calculate the ILSS, the force value at the first failure, i.e., before the first drop in the traverse path-force characteristic curve, is used in accordance with DIN EN 2563. For films without gold coating, no significant influence of the sensor edges can be observed. In the case of gold-coated film strips, there is an improvement in ILSS compared to the full-surface film, which is significant at least for PEI films.
Further insights can be gained from the ILS data by calculating the differential compliance curves from the force-traverse movement curves. To obtain smooth curves, the x and F curves are each smoothed over 5 measurements and the course of is also smoothed. This results in a compromise between low falsification of the measured data and smooth curves. In laminates with integrated PA6 films, a sigmoidal increase in differential compliance at low forces from 1.5 can be observed, in the case of PES from 1.7 , see Figure 9. Laminates with PEI film do not show such a sigmoidal increase but achieve a slightly higher differential compliance at a force of 3 compared to the reference laminates.
The critical energy release rate for mode I crack propagation is obtained from DCB tests. The results show a significant improvement in the energy release rate for specimens with PEI, PES and PA6 film compared to the reference specimens, whereas the specimens with PI film show no significant improvement in the energy release rate compared to the reference specimens, see Figure 10.
Video recordings of the crack propagation during the testing of the specimens show different scenarios of crack propagation. For example, the crack propagation in the reference specimens and the specimens with PEI film was quasi-stable and continuous, whereby in the PES specimens, the crack propagation had a stick-slip form. The crack growth in the PA6 specimens propagates via crack jumping. In the case of the specimens with PI film, the crack propagation had a different shape. It was found that the force increased for some specimens after the first drop in force (after the crack has been created). The optical investigations show zones in the fracture surface of PI specimens where very high adhesion occurs. This can be seen by a steep increase of the normalized in the R-curves. For example, the green curve for the PI specimens in Figure 11 indicates that the crack stops at a crack length of about 40 . In the force traverse path curve in Figure 12, a stop in crack propagation can be recognized by the transition from a decreasing force curve to an increasing force curve. This progression is not only apparent for PI but also for the samples with integrated PA6 film, which show a pronounced crack jumping. The normalization in Figure 11 is done by dividing the values calculated according to MBT by the values calculated according to DIN EN 6033, which are not a function of crack length a. The division gives unitless values that are a function of the crack length a.
In CAI tests on laminates with integrated PEI, PES and PA6 films, no significant influence of the integrated film compared to the reference can be demonstrated, neither when considering the damaged area nor when considering the residual compressive strength, see Figure 13. Especially the damaged area does not seem to be strongly influenced by the impact energy or by the inserted films. On the basis of the available data, however, it seems unlikely that the films have led to a degradation of the CAI characteristics. An analysis of the data with ANOVA shows that no significant influence of the films can be proven, but the influence of the impact energy is as expected: higher impact energies lead to larger damage areas and lower residual compressive strengths. The PES sample series impacted at 20 is noticeable by a high scatter of residual compressive strengths. In contrast, the samples with integrated PEI films show the narrowest confidence interval.

The ILS tests show that PEI and PES have excellent shear strength in combination with the prepreg used. In comparison, PA6 exhibits slightly but significantly lower binding but dissipates more energy during crack propagation in the DCB test. However, PEI and PES are also suitable for improving the crack propagation resistance of epoxy resin. The classically used PI shows a locally strongly differing adhesion in the DCB test. Overall, no significant influence of the PI film can be detected in the DCB tests due to the large scattering. Studies on the shear strength of the PI-epoxy interface are still to be carried out.
Neither in the tensile tests nor in the CAI tests a significant influence of any of the inserted film materials can be proven. In the case of the tensile tests, the nonsignificant influences show that the integration of thin thermoplastic films does not noticeably influence the tensile strength of the epoxy resin matrix. Scattering caused by notch effects due to the irregular surface due to the peel ply distinctly overweigh possible influences of the thermoplastic films. This result is not surprising, but it was important to exclude such an influence by means of the tests. In the CAI test, the nonsignificance can be attributed to the small amount of thermoplastic material introduced. If, for example, films were integrated between all prepreg layers, as is the case with interleafing, a significant influence could possibly be observed, but this case does not reflect the situation that occurs with sensor integration.
In further work it is planned to replace the integrated films by film sensors and thus measure the curing reaction. For this reason, the influence of sensor-typical gold patterns on the energy release rate and ILSS will have to be determined in future work. The mechanical influence of the interconnections will also be investigated in further work. Since some of the thermoplastics used in this article are soluble, the interphase formed between epoxy resin and the thermoplastic substrate during curing will also be the subject of further investigations. In addition, the integration of sensors raises manufacturing and electrical questions, which will also have to be addressed. 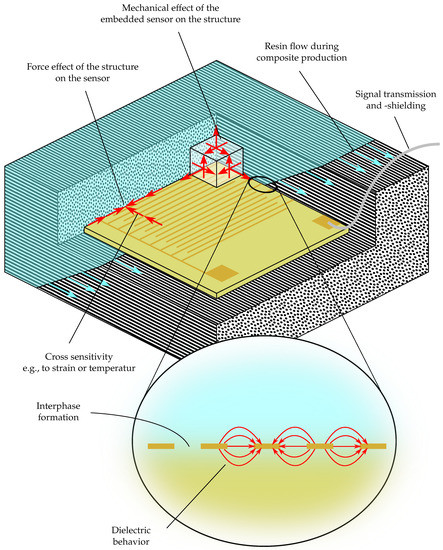 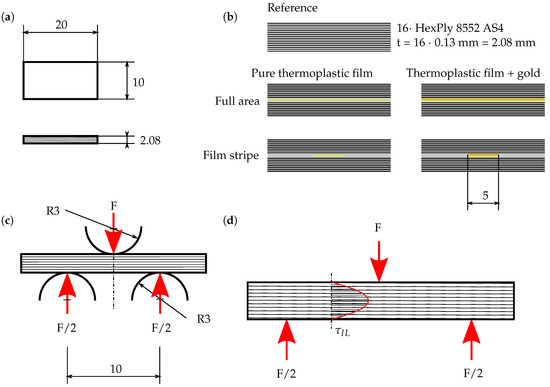 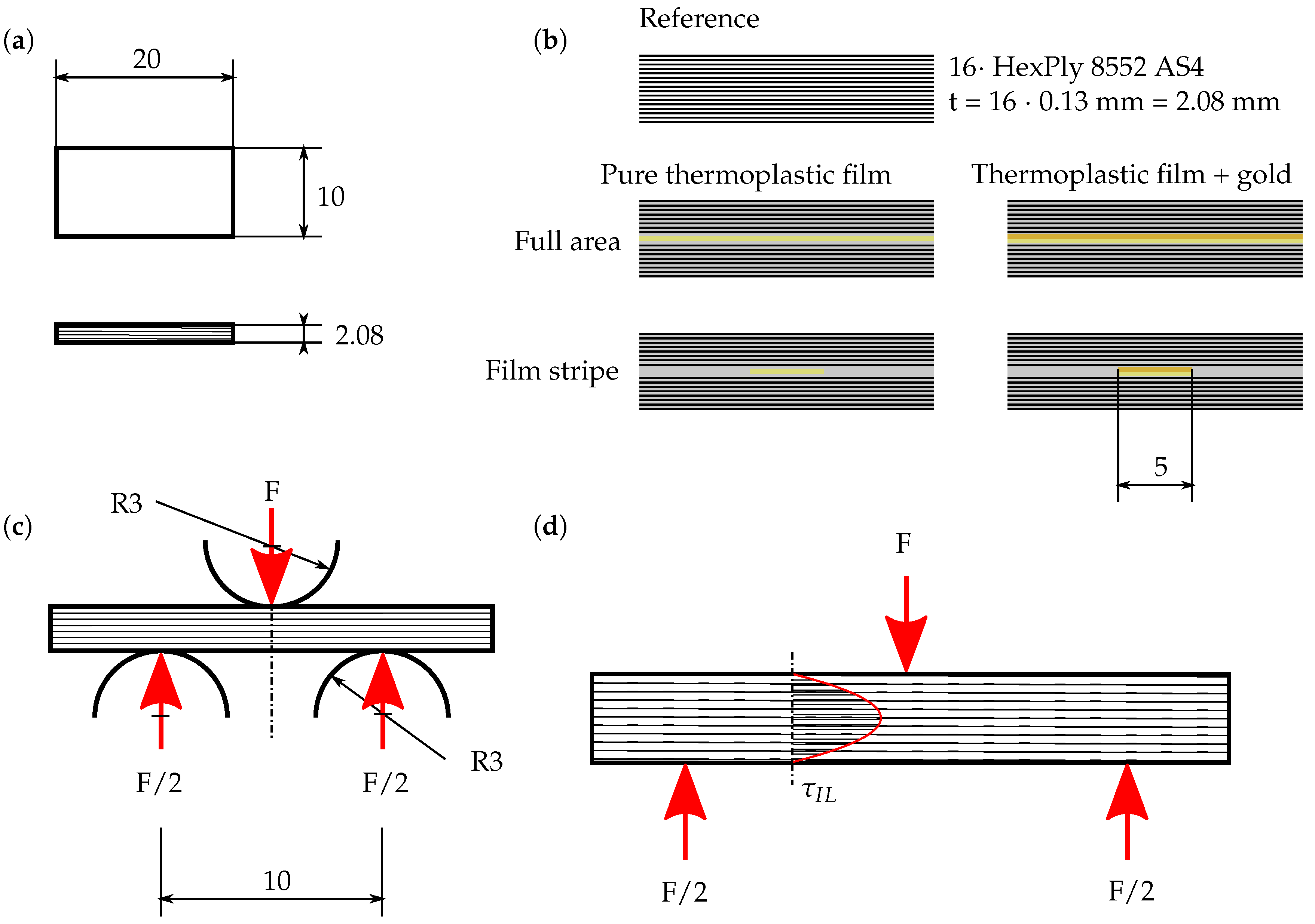 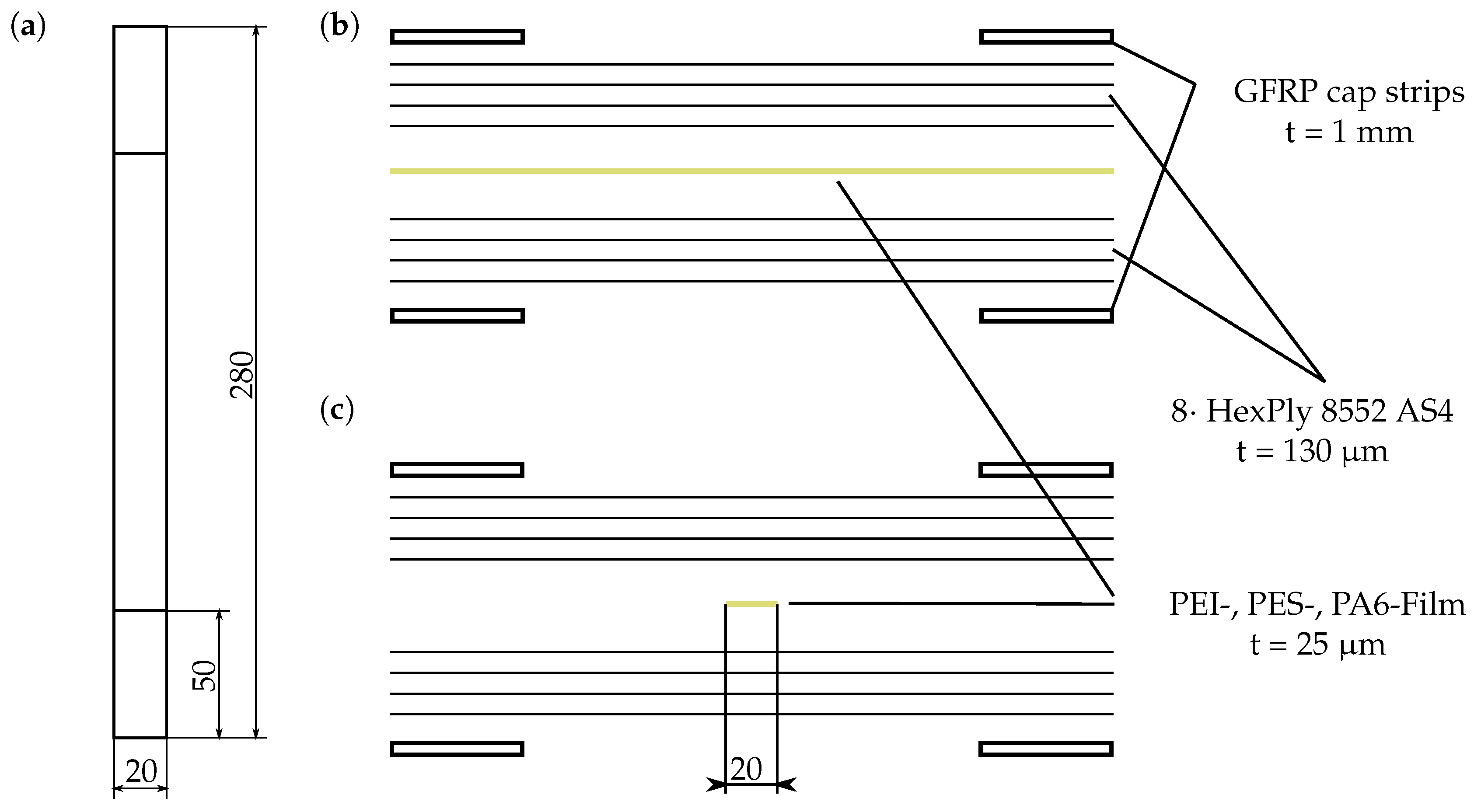 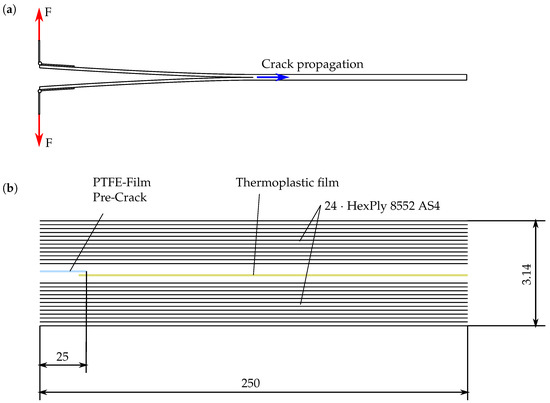 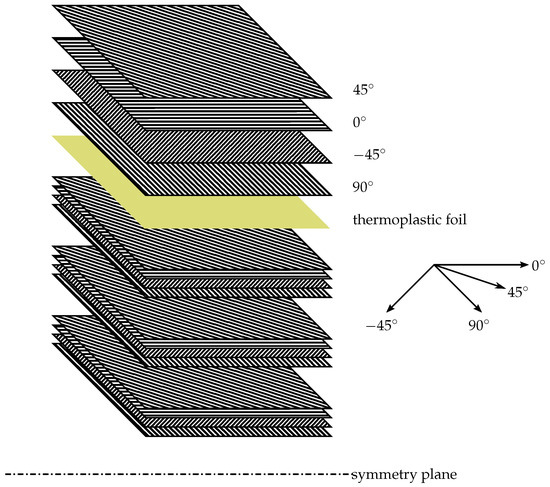 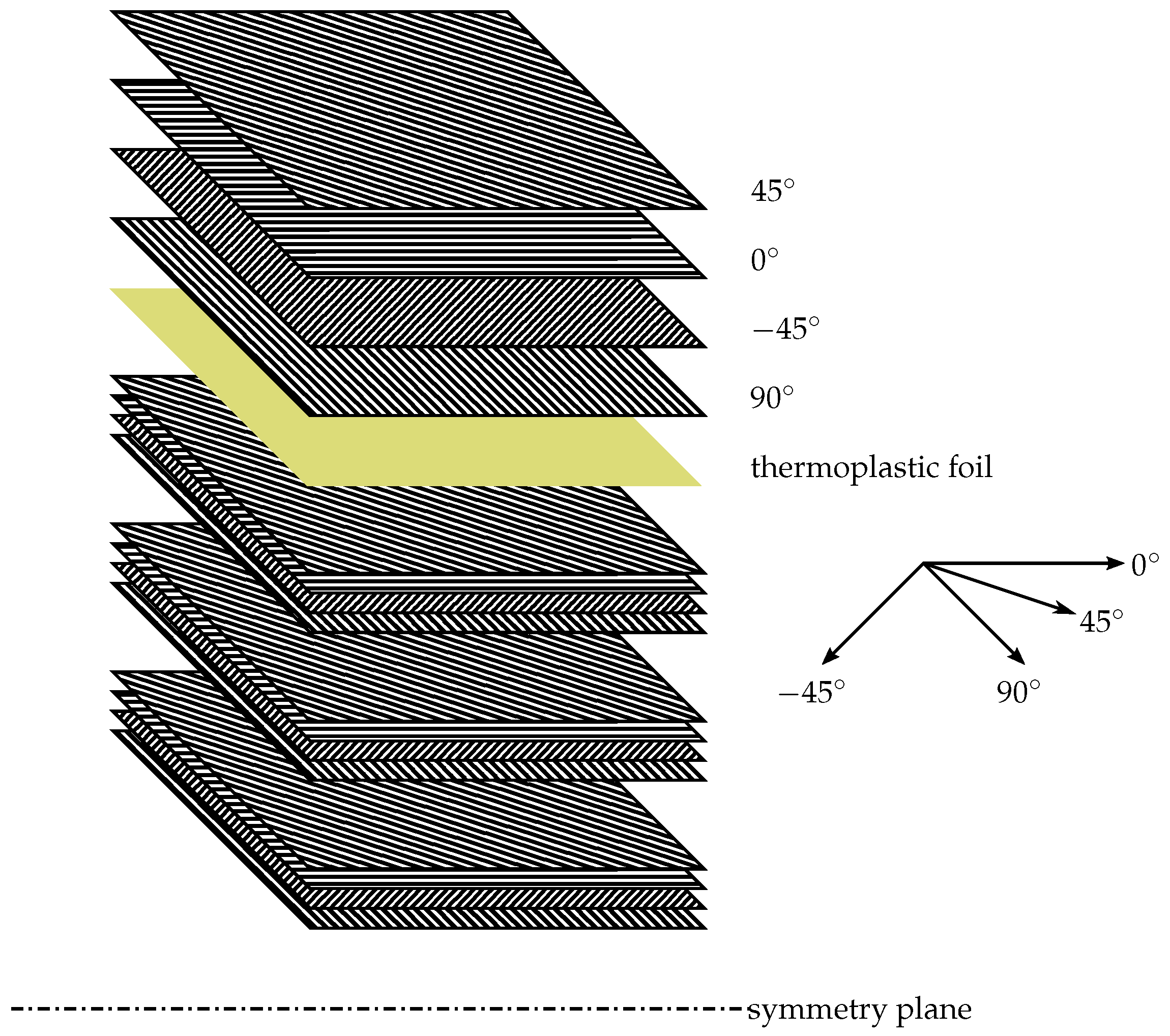 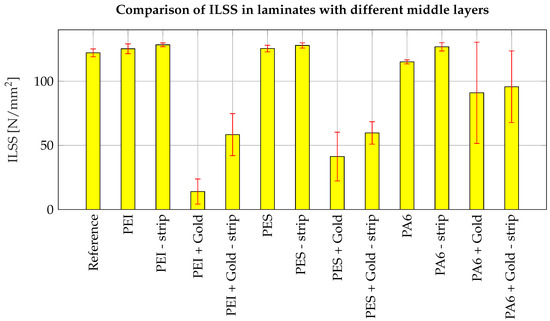 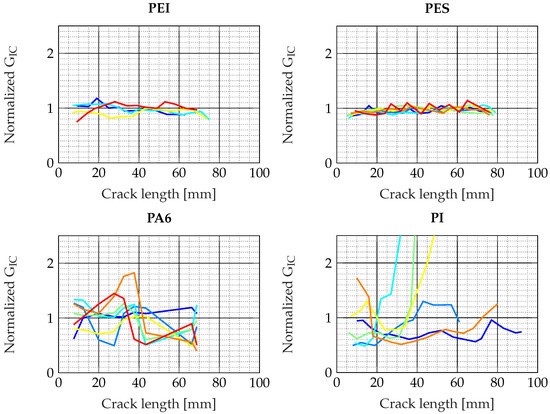 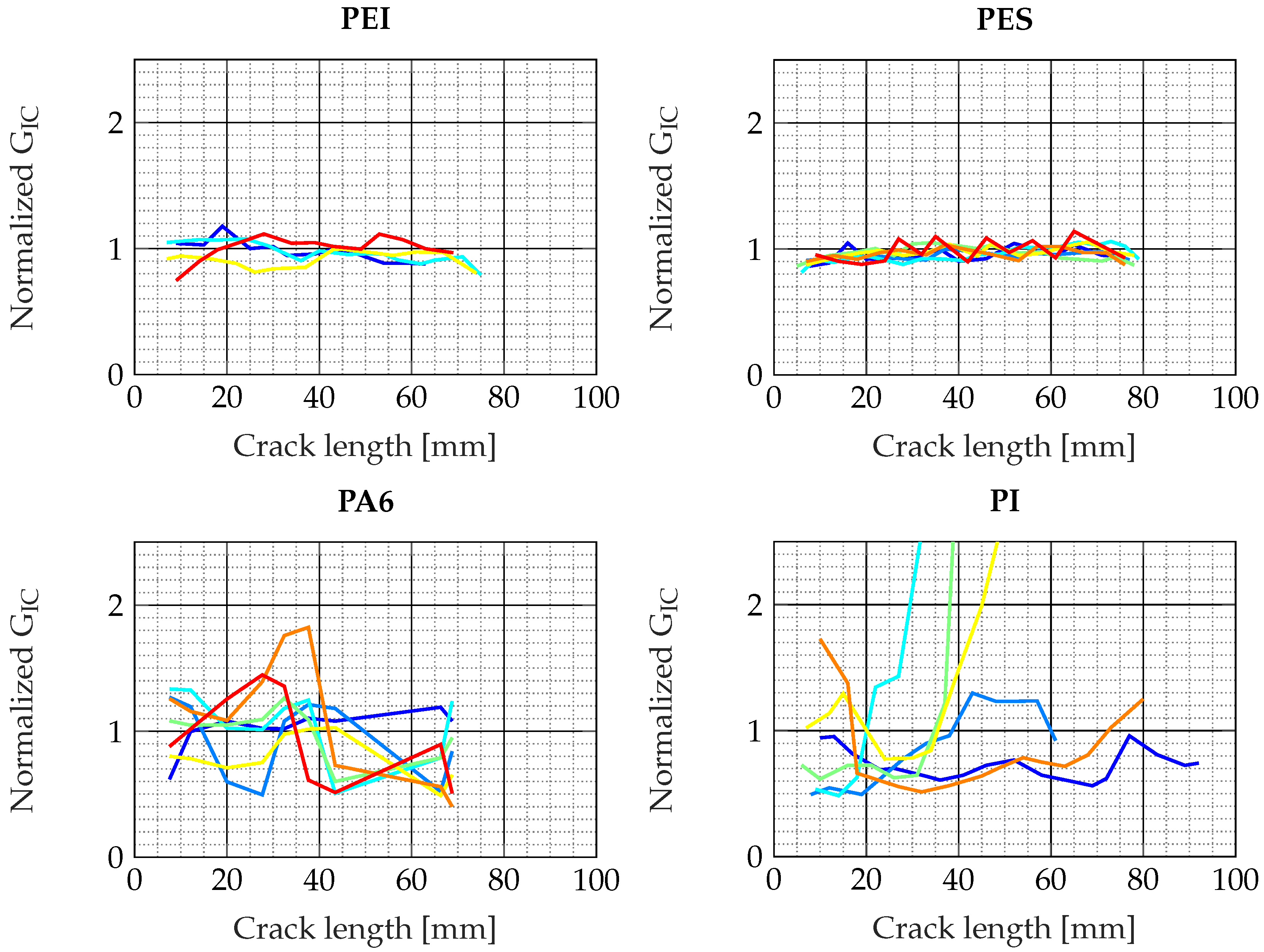 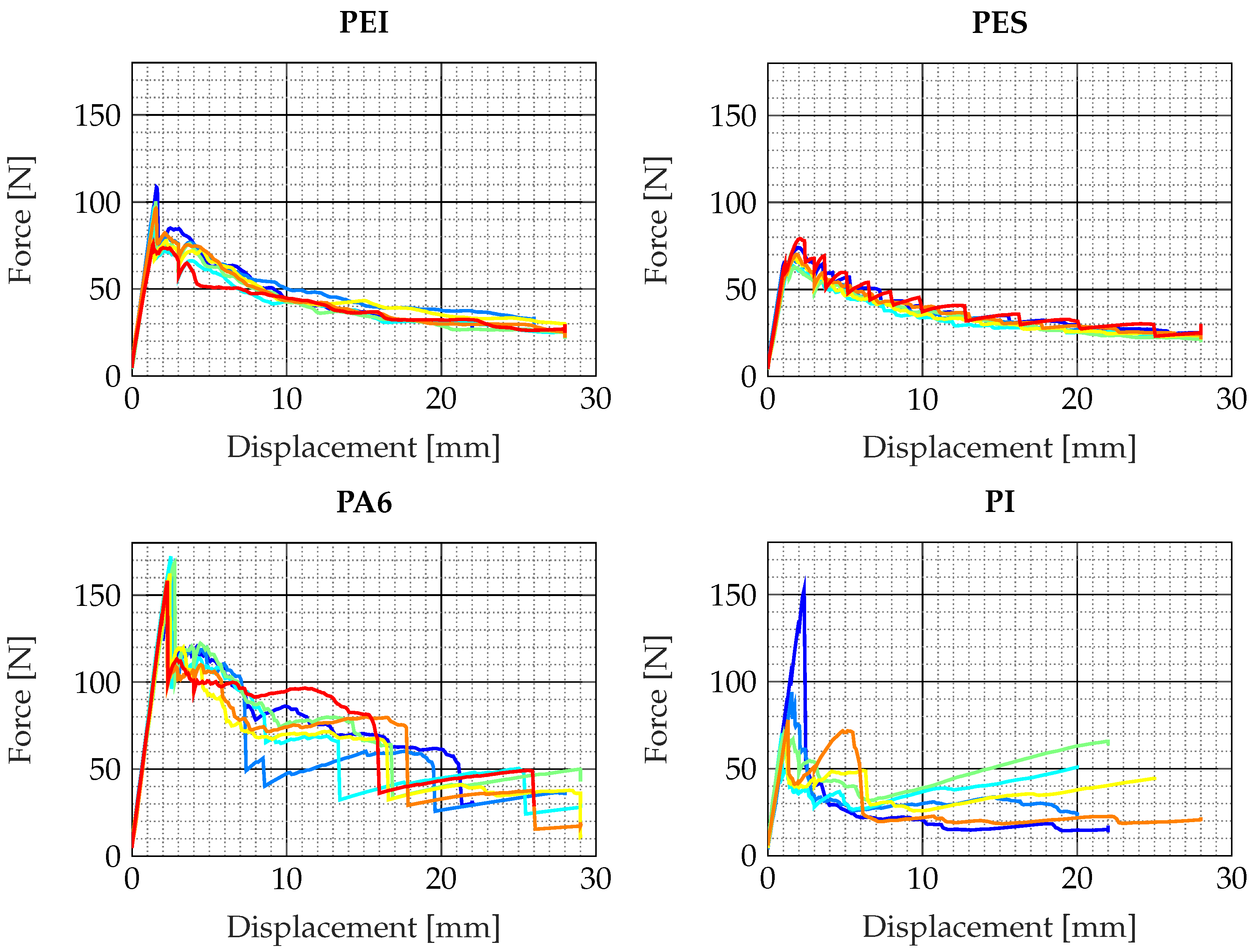 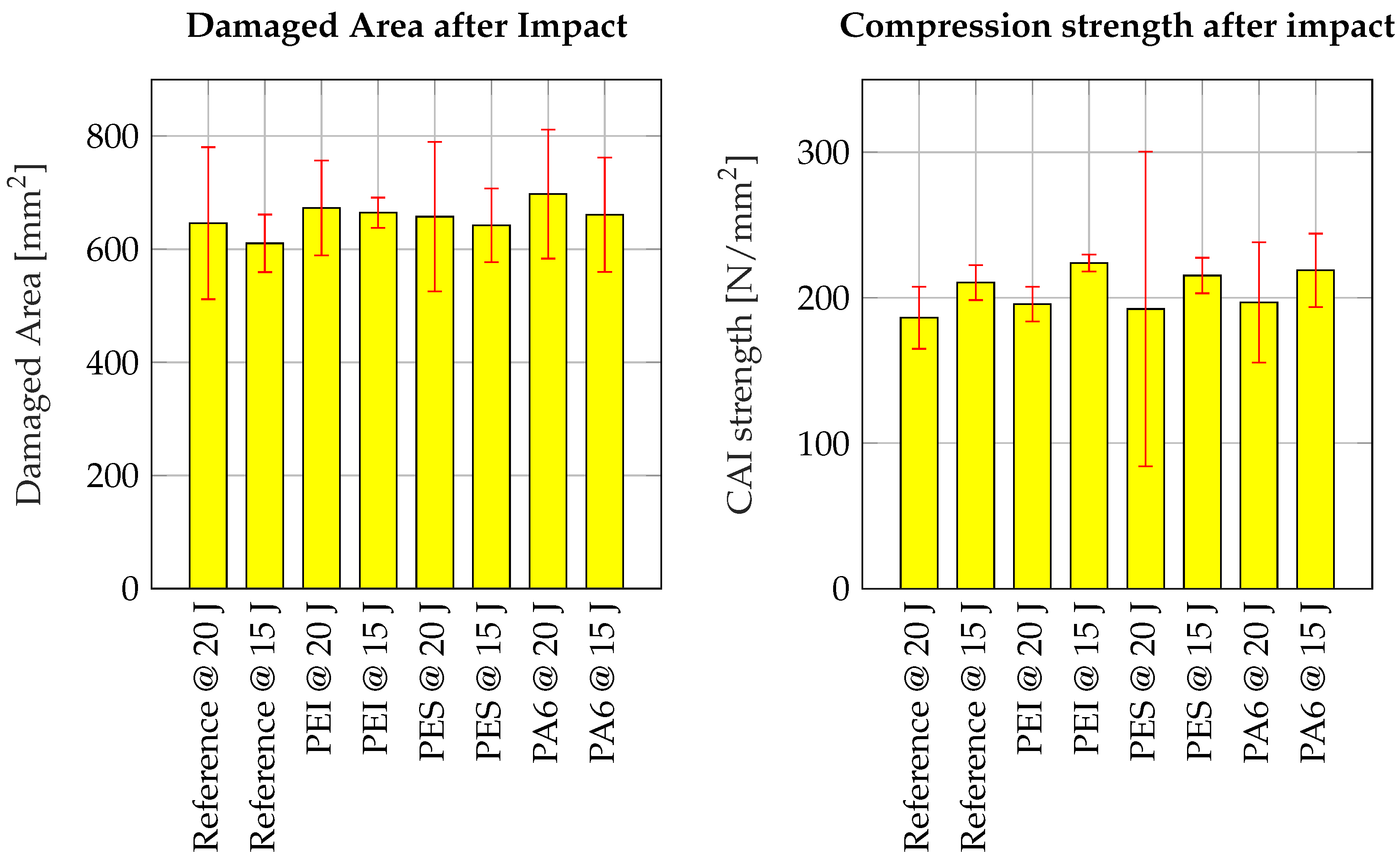