Carbon black (CB) is the most common reinforcing filler used in aircraft tire tread formulations. For CB-reinforced natural rubber/butadiene rubber (NR/BR) compounds, material and processing parameters are important factors that need to be controlled, as they can influence both, processing as well as the vulcanizate properties. It is essential to investigate and optimize the key elements, in order to achieve the target properties, while maintaining an acceptable trade-off for other characteristics. In the present study, the type of BR, mixer temperature, rotor speed, and filler mixing time were selected as input factors. A complete design of experiments (DOE) process was performed that comprised the following—two-level full factorial setup for initial screening, response surface method (RSM) for optimization, and confirmation runs for validation. This evaluation procedure was used to study the impact of factors and their interactions on the properties of CB-filled NR/BR compounds. From the DOE optimization which was later confirmed by the DOE validation, high rotor speed and long filler mixing time were the most significant factors in improving the Mooney viscosity, modulus at 300% elongation, hysteresis (tan delta), as well as in reducing the filler–filler interaction (Payne effect). In the case of tensile strength (TS) and abrasion resistance index (ARI), high rotor speed and long filler mixing time had an adverse effect, thus, causing a deterioration of these properties. Therefore, it is recommended to decrease the filler mixing time when combining it with high rotor speed.
Keywords: design of experiments; carbon black-filled rubber; aircraft tire tread design of experiments; carbon black-filled rubber; aircraft tire tread

Aircraft (AC) tire treads experience severe operating conditions in which the tire treads must be able to endure high forces, upon landing of the aircraft—the tire touches the ground with zero rotational speed which creates a high friction under substantial load, thus causing high temperatures within the AC tire tread. During takeoff, aircrafts also experience significant forces, which require a rapid acceleration to relatively high speeds under load [1]. Due to these extreme working conditions, AC tire treads need to be resistant against heat generation and wear. Based on the simulation done by Alroqi et al., at zero rotational speed during landing, the temperature of the tire tread in the main area of contact was around 300 °C, while the majority of the tread temperature was less than 165 °C [2].
The selection of compound ingredients plays a vital role in the performance of AC tire treads. The main requirements for AC tire treads are low hysteresis, superior tensile and tear strength, good retreadability, good adhesion to the underlayer, and high wear resistance [1]. Therefore, the treads of AC tires generally contain natural rubber (NR). This polymer is essential in AC tire tread compounds, due to several advantages such as superior tensile and tear properties, low tire temperature (hysteresis) under loaded dynamic service conditions, good component-to-component adhesion, and green strength for tire retreadability [3]. Another essential requirement is high wear resistance; therefore, a blend of NR and butadiene rubber (BR) is typically used for AC tire treads. BR gives a better low temperature flexibility, higher resilience, and superior abrasion resistance than most tire rubbers [4]. Reinforcing fillers, such as high surface area Carbon black (CB), in particular high abrasion furnace (HAF), intermediate superabrasion furnace (ISAF), and super abrasion furnace (SAF) types, can also be added to enhance the abrasion resistance [5].
Besides the ingredients, processing of rubber is also a crucial aspect in material preparation. The major variables in mixing rubber are ram pressure, the sequence of material addition, rotor speed, batch size, mixing time and temperature [6], fill factor, and rotor type. A proper selection of these variables can further optimize the properties of rubber compounds.
It is essential to investigate and optimize the compounding and processing key elements, in order to achieve the target properties, while maintaining an acceptable trade-off for other characteristics. Design of Experiments (DOE) is used for this purpose instead of a conventional experimental method, which is done by varying all relevant factors simultaneously. Moreover, an approach such as one factor at a time (OFAT) does not lead to a real optimum for the investigated system, and fails when choosing the optimum setting conditions. Although OFAT can directly reveal how certain factors affect the product performance, it covers the whole parameter space very poorly and does not disclose whether there are interactions between specific factors. In contrast, by a DOE approach, the entire factor space can be explored by using as many variables as necessary at the same time. Thus, a more substantial space volume response is covered, and factor interactions are also revealed [7].
In this study, four factors, namely, the type of BR, mixer temperature, rotor speed, and filler mixing time, were selected as the key parameters and investigated in CB-filled NR/BR compounds. Aiming to identify the most significant factor for balancing the properties of aircraft tread compounds, a complete design of the experiments (DOE) process comprises a two-level full factorial setup for screening. The properties of AC tire treads, such as the Mooney viscosity (MV), filler–filler interaction (Payne effect), hysteresis (tan delta at 100 °C), stress–strain properties, and abrasion resistance index (ARI) were chosen as the responses. Finally, after the screening process, the two most notable factors were optimized and confirmation runs for validation were performed.

The rubber types used were Natural Rubber (Ribbed Smoked Sheet (RSS-1)), obtained from Weber and Schaer GmbH and Co. KG, Hamburg, Germany, and highly linear (HL) BR (CB22), as well as long-chain branched (LCB) BR (Nd22EZ) from Arlanxeo, Dormagen, Germany. Other compounding ingredients were high structure carbon black N234 from Cabot, Alpharetta, Georgia, USA, treated distillate aromatic extract oil (TDAE oil) from Hansen and Rosenthal, Hamburg, Germany. N-cyclohexyl-2-benzothiazole sulfenamide (CBS), 2,2,4-trimethyl-1,2-dihydroquinoline (TMQ), N-phenyl-para-phenylenediamine (6PPD), zinc oxide (ZnO), stearic acid, and sulfur were of technical quality.
For the DOE screening purpose, two types of BR were used (as given in Table 1) to study the effect of the type of BR on the properties. The compound formulation used for this study is depicted in Table 2, adopted from a patent for AC tire tread formulations [8].
For the DOE screening, mixing was performed in an internal mixer (Brabender Plasticorder 350 s), with an initial mixer temperature setting, rotor speed, and filler mixing time varying on the basis of the defined experimental design (see the DOE screening method). The mixer was operated at a fill factor of 70%.
Two-stage of mixing was performed as shown in Table 3. NR was initially masticated prior to the addition of BR to have a Mooney viscosity close to the one of BR. The masticated NR and BR were blended for 1 min. Then, half of CB and TDAE oil were added and mixed for half the set filler mixing time. After that specific time, the other half of CB and TDAE oil were added and mixed for the remaining time, according to Table 4. Finally, other ingredients—ZnO, stearic acid, 6PPD, and TMQ were added and mixed for 2.5 min. The compounds were then dumped, sheeted out on a two-roll mill and kept overnight before incorporation of sulfur and CBS in an internal mixer at a temperature of 70 °C and an initial rotor speed of 50 rpm. For this, the masterbatch was mixed for 1 min, the rotor speed was decreased to 30 revolutions per minutes (rpm) before curatives were added and the compound was mixed for another 2 min.

Scheme S1 of the supplementary materials depicts the flow chart of the DOE process in this research. The method comprises DOE screening, DOE optimization, and a confirmation run to check the validity of the model with the result from the actual experiment.

A DOE screening was used at the beginning of the experiment. The objective at this stage was to explore if the factors influence the selected responses and to identify the appropriate ranges. A two-level full factorial approach comprising four factors is shown in Table 4. Each factor had two levels—a low level (−1) and a high level (+1) with an additional center point (CP, 0) chosen for replication, except for the BR type.
The two-level full factorial design with four factors, denoted 24, is geometrically represented in a cube, as shown in Figure 1. The cube is representative of two different types of BR. The three axes are dedicated to temperature, rotor speed, and filler mixing time. The total number of experiments for this stage was 22 runs as shown in Table S1 of the supplementary materials.

The two most significant factors on the defined-responses from the DOE screening were further optimized using the response surface method (RSM)—rotor speed and filler mixing time. A central composite circumscribed (CCC) design was selected for the DOE optimization, with the level settings as shown in Figure 2. A total of 11 runs were performed to elucidate, in more detail, the effect of the rotor speed, filler mixing time, and their interactions with the compound properties.
The assessment of the significance of the effects and their interaction in both DOE screening and DOE optimization was done by analysis of variance (ANOVA) (see Tables S2 and S3 of the supplementary materials). The DOE also provided several graphical outputs, such as:
Design-Expert® Software Version 10 (Stat-Ease, Minneapolis, MN, USA) was used for analysis in DOE screening and DOE optimization.

Rotor speed and filler mixing time were optimized further, while the mixer temperature was set at 50 °C, since a high mixer temperature had a negative effect on the M300%, the tensile strength, and the ARI, based on the DOE screening. LCB-BR was chosen because it gave comparable properties to HL-BR, but showed a better processability. The Response Surface Method (RSM)—Central Composite Circumscribed (CCC) design were used (see Figure 2) to find the best level setting for optimizing all properties.
The results of the DOE optimization for all responses are shown in Tables S4, S5 and Figures S7–S12 of the supplementary materials. Figure 13 shows the response surfaces and the contour plots for rotor speed and filler incorporation time, derived from the DOE optimization. Similar trends as in the DOE screening were found for the MV (ML (1 + 4) 100 °C), whereas a high rotor speed and a long filler mixing time decreased the MV. For the Payne effect, tan delta, and M300%, an optimum filler mixing time was needed, in combination with a high rotor speed, to improve those properties. In the case of tensile strength and ARI, a high rotor speed and long filler mixing time had an adverse effect, thus, decreasing these properties. Therefore, it is recommended to decrease the filler mixing time to less than 6 min, when combining with 130 rpm rotor speed.

A comprehensive study by means of DOE, to determine the most significant parameters influencing the properties of CB-filled NR/BR compounds for AC tire treads was carried out in this research. As a general conclusion, it can be said that DOE was a suitable tool for elaborating the optimum parameter settings to balance the properties as desired. This approach resulted in predictive models giving values quite close to the actually measured ones.
Among the factors studied, rotor speed and filler mixing time were the most significant ones. By optimizing the setting conditions for these factors, all required properties needed for the AC tire tread application were fulfilled. However, for the properties for which a trend was defined like hysteresis (tan delta) to be as low as possible, and abrasion resistance to be as high as possible, further improvement in material selection, as well as processing, is still needed. Incorporation of a small portion of silica in carbon-black filled rubber compounds, along with the most suitable silane coupling agent and addition of resins, are some of the approaches to further decrease hysteresis, while maintaining a high abrasion resistance.

This research was funded by RisetPro scholarship from the Ministry of Research, Technology and Higher Education of Indonesia. 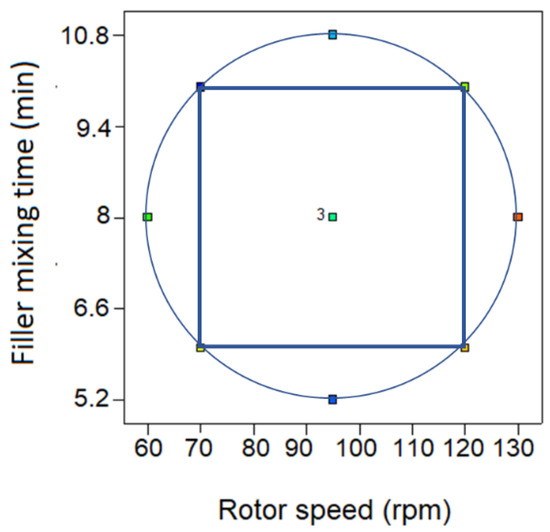 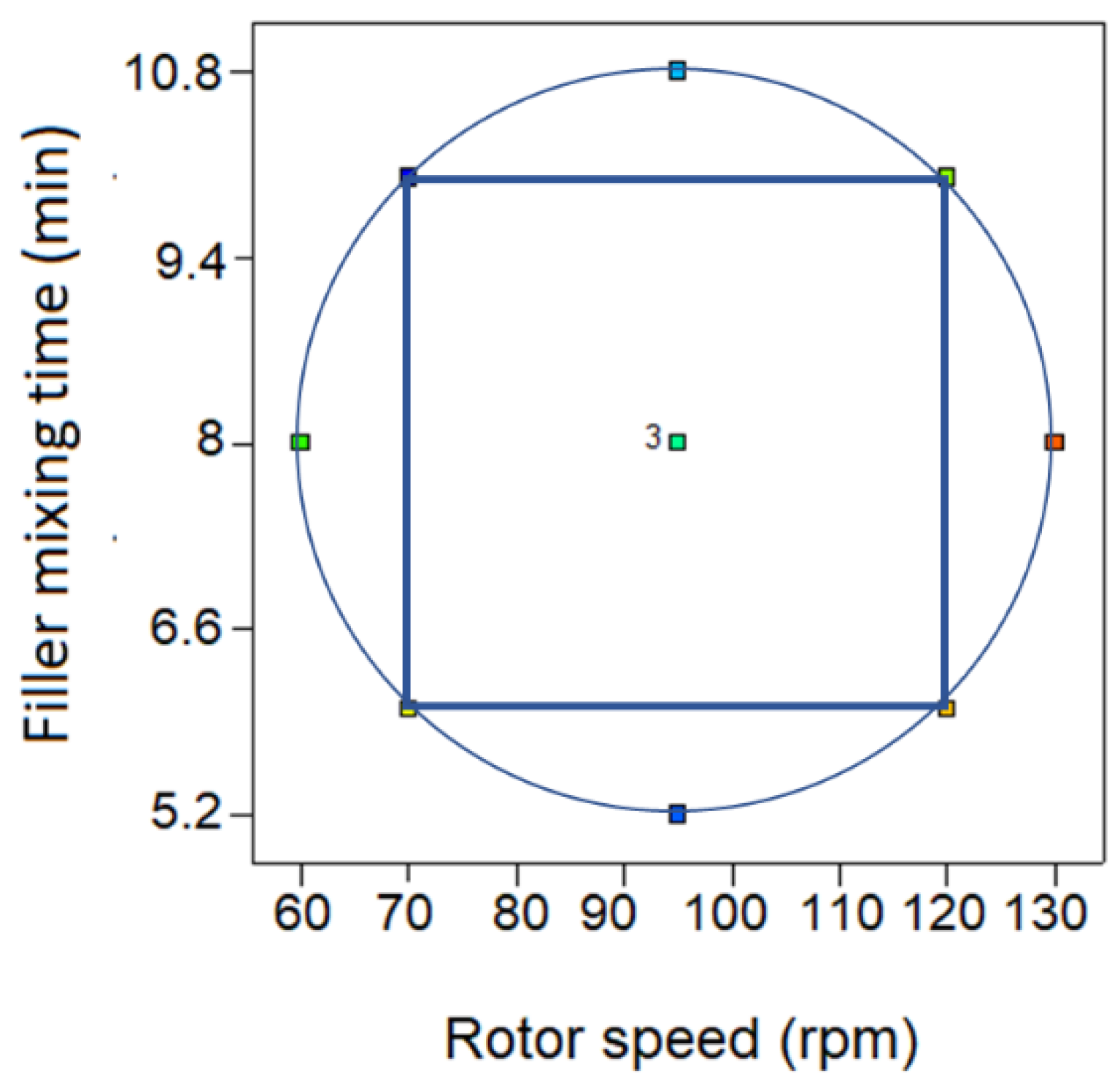 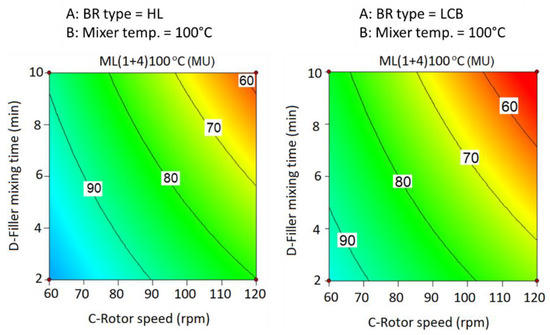 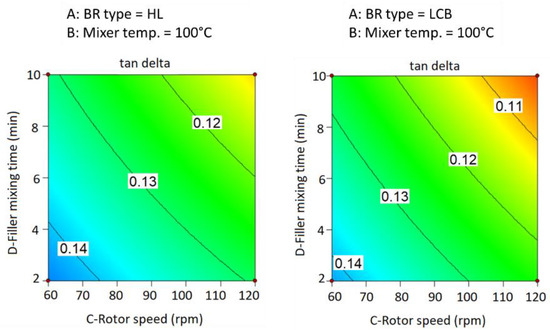 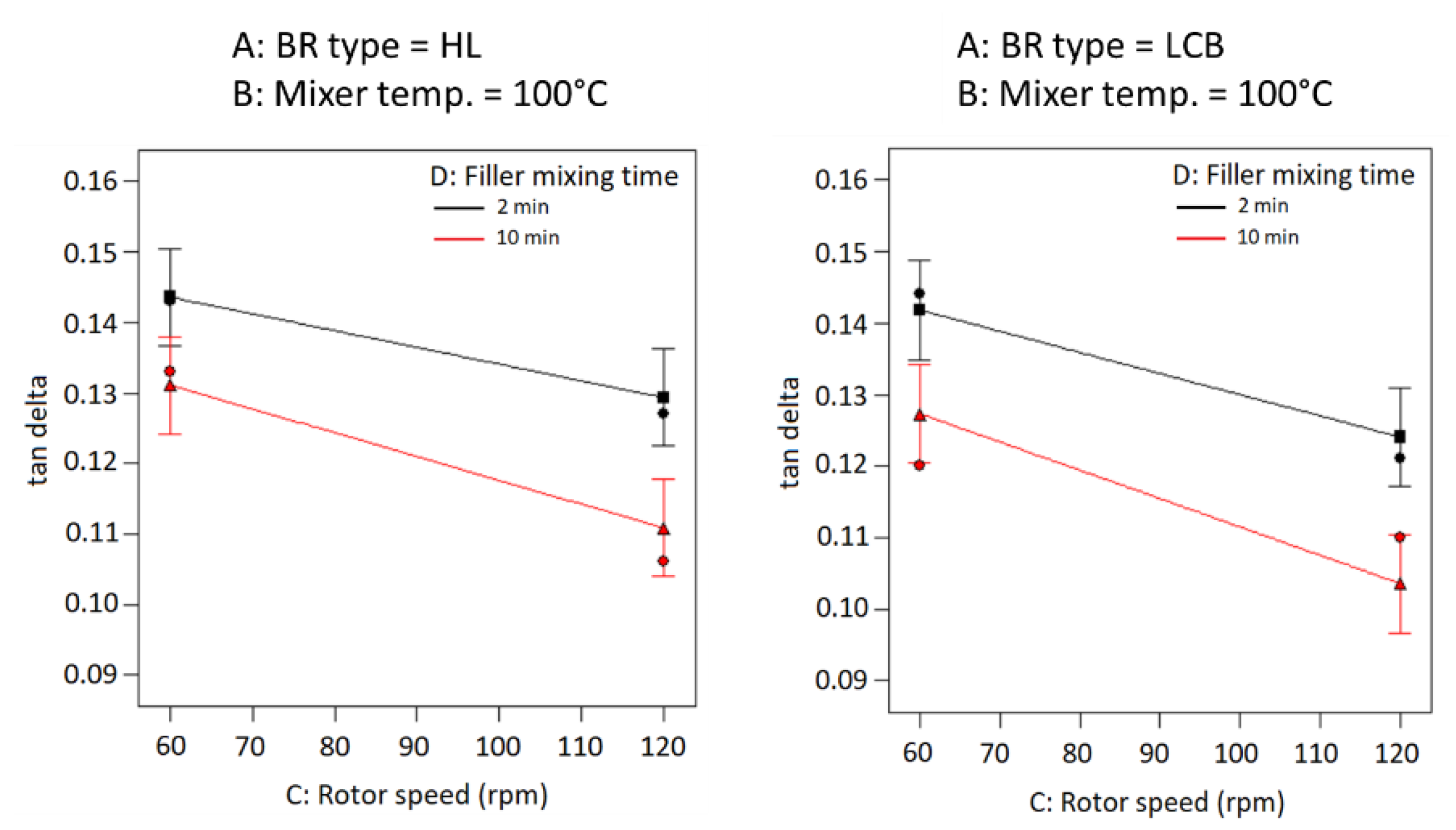 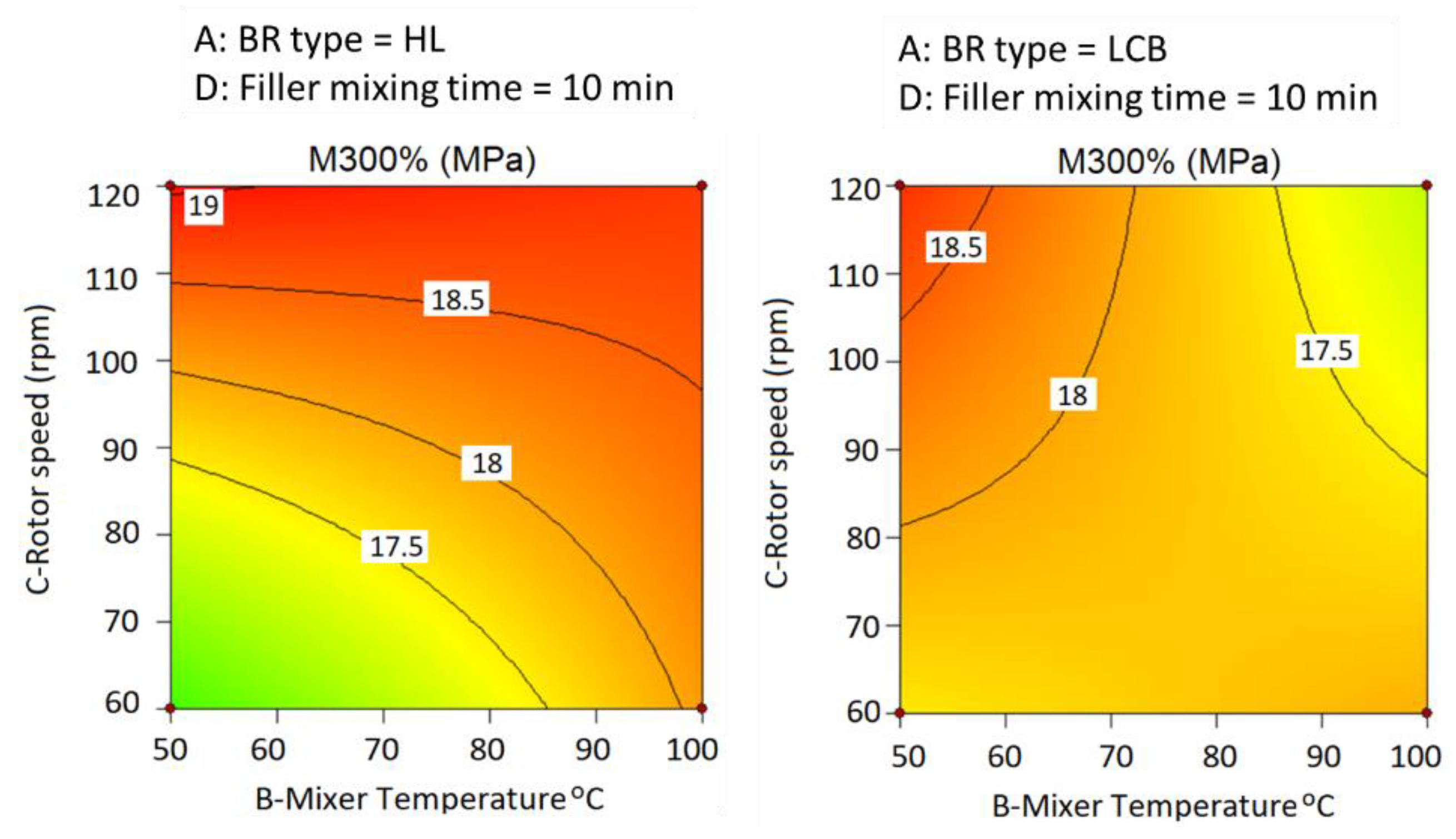 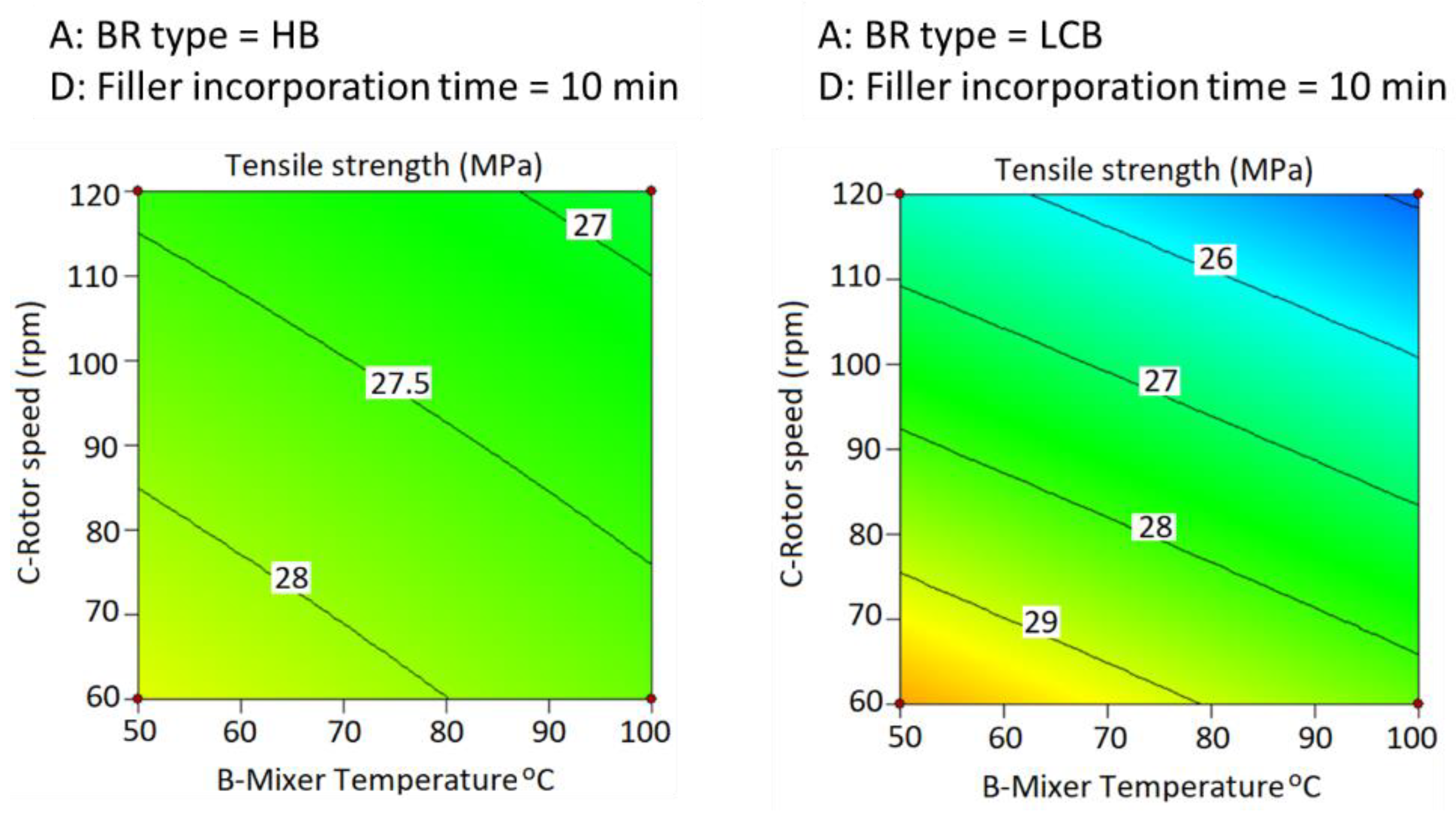 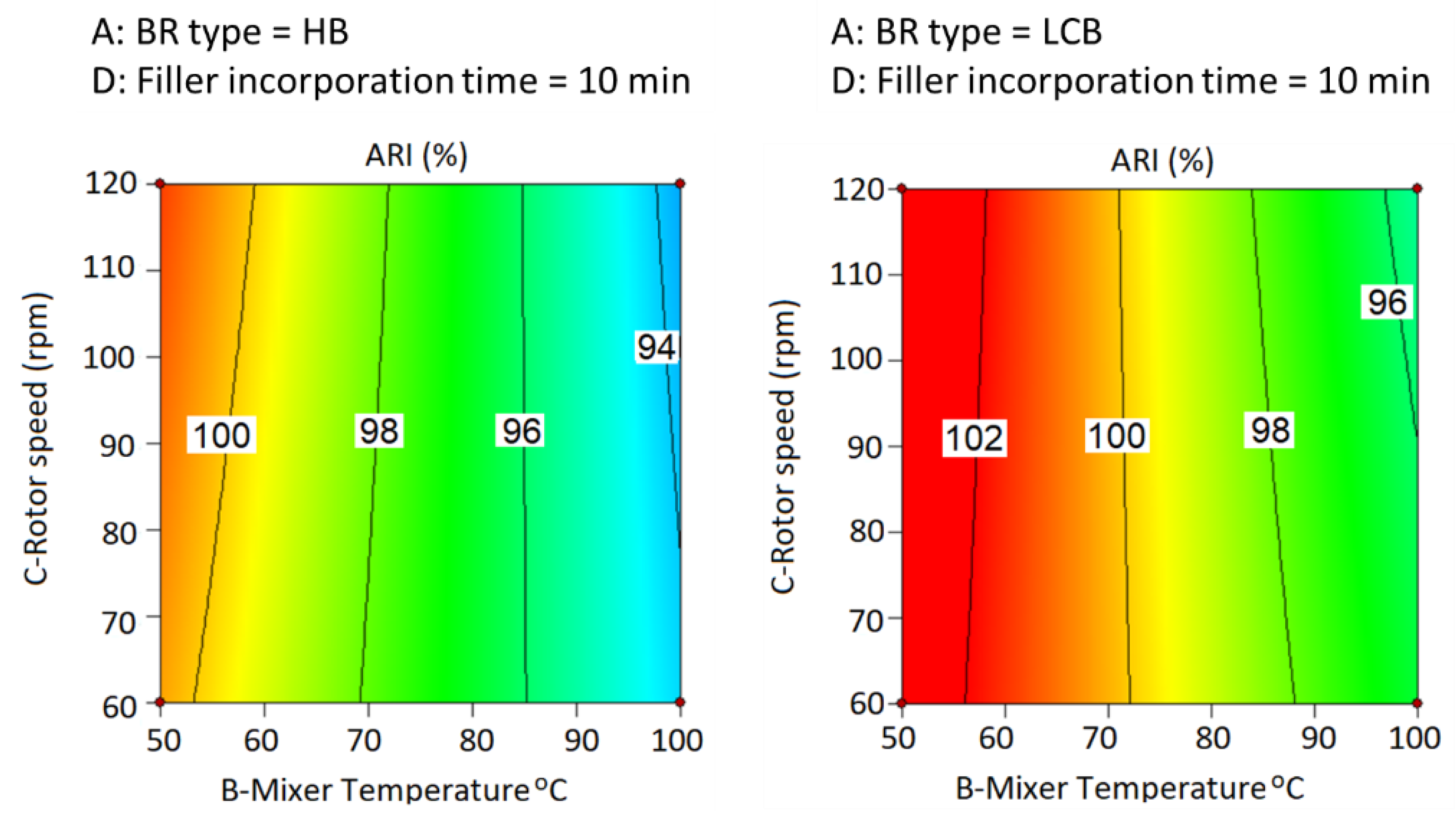 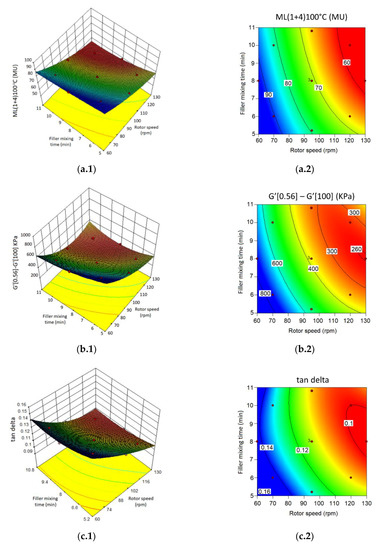