Most of the metal 3-D printers available on the market are for high-end applications, which require expensive equipment and use relatively dangerous fine metal powders [1]. Due to the cost and the complicity of the technology, it is inaccessible for small and medium enterprises (SMEs), fablabs, and individual makers who are interested in the ability to prototype and make final products in metal using additive manufacturing technology. Following the tradition of the self-Replicating Rapid-prototyper (RepRap) [2,3,4], a low-cost open-source metal 3-D printer was developed with a gas metal arc welding (GMAW)-based print head, which radically reduces the costs of metal 3-D printers to less than $1200 [5]. The open source metal 3-D printer uses readily available weld filler wire as the source of material and the initial designs have been improved upon with integrated monitoring [6] of the welding system [7]. In addition, recent work has shown approaches to reuse substrates which help to reduce costs, energy, time, and the environmental impact of manufacturing [8,9]. These previous works showed that GMAW-based metal 3-D printing has a good adhesion between layers and is not porous inside the printed parts, but did not proceed far enough to demonstrate its applications, e.g., only test cubes and dog bones were printed for mechanical testing. Many studies have been done on the 3-D weld deposit-based process [10,11,12,13] and investigated thermal properties and stresses [14,15,16,17], toolpath planning [18,19,20,21], bead-width control [22,23], mechanical properties [24,25], and support for overhangs [26]. These previous works clearly demonstrated that GMAW-based metal 3-D printing prints solid objects with low porosity, but did not proceeded far enough to directly demonstrate applications.
In this paper, the utility of the GMAW approach to 3-D printing will be investigated using a low-cost open-source metal 3-D printer and a converted Computer Numerical Control (CNC) router machine to make useful parts over a range of applications including (1) fixing an existing part by adding a 3-D metal feature (e.g., re-manufacturing); (2) creating a product using the substrate as part of the component; (3) 3-D printing in high resolution of useful objects; (4) near net objects; and (5) making an integrated product using a combination of steel and polymer 3-D printing. These applications will be discussed in the context of sustainable development.

The design of the low-cost open-source metal 3-D printer [5,7] is inspired by the Rostock style delta RepRap [27]. However, it uses a stage printing setup allowing for stationary heavy toolheads [28,29] while automatically controlling the movement of a substrate with three-axis control under a fixed perpendicular weld gun printer head (Figure 1C). The motion controls are managed by an Arduino-based microcontroller and the free and open source 3-D motion control software called Franklin [30]. Franklin also controls the welder (e.g., on for printing and off for traveling). A Millermatic 190 welder (Miller, Appleton, WI, USA), ER70S-6 steel wire, and shield gas of RC25 (75% Ar and 25% CO2) were used for the experiments. Printing is performed on a re-useable substrate of low carbon steel with dimensions of 127 × 127 × 6 mm. The stage that holds a substrate is covered with cement board and then an aluminum plate (Figure 1C) to accelerate the transfer heat away from the printed part.
For a 3-D model larger than 127 mm in any dimension, a CNC Router Parts machine was adapted as a GMAW 3-D printer) [31]. A Benchtop PRO CNC Machine Kit (North Bend, Washington, DC, USA) was adapted to be used in this research [32]. The work area is 25″ × 25″ and the Z clearance is 7″. The resolution or repeatability is ±0.001″ or ±0.0254 mm. The Millermatic 190 GMAW is also used for the filament deposition tool. The weld gun is mounted to the tool holder of the machine as the printer head and modified to accept a control signal. The control unit is modified to add output signal wires to the weld gun connection to turn the welder on and off. Substrates of the same low carbon steel with dimensions of 254 × 254 × 6 mm were then used. The aluminum plate with the same size of the substrate is placed under the substrate. Here, the substrate is also held down at four corners during the printing and the moving weld gun is mounted to the tool holder. The welder and the shield gas are the same as in the delta printer above. Mach3 CNC33 software (v. 3.043.062) [33] was used to communicate to the control unit via an Ethernet cable.
MOSTMetalCura [34] is a customized version of CuraEngine for metal 3-D printing. It slices a 3-D model into 2-D layers and generates toolpaths for each layer. The produced toolpaths are recorded as G-Code. Franklin and Mach3 use G-Code instructions to control the movements of the printers. MOSTMetalCura has added the abilities to turn on and turn off the welder through G-Code, to keep the status of printing or welding, to set how long to pause between layers for the printed part to cool down, and to recommend the wire feed speed setting on the welder (specific for Millermatic 190, for other welders an equation for wire feed speed in MOSTMetalCura would need to be edited). The important settings for MOSTMetalCura are infill line width or bead width, layer height, printing speed, and material diameter.
From a 3-D model, which can be downloaded from free design repositories or created by open-source CAD software (e.g., OpenSCAD [35]), MOSTMetalCura generates a G-Code file from the 3-D model. The settings for open-source GMAW-based metal 3-D printing are shown in Table 1. Connecting to Franklin through a browser via a web service, Franklin loads the G-Code file and verifies instructions inside the file. When the printing is started by the user, Franklin translates each G-Code instruction and controls the stepper motors on the MOST’s open-source 3-D metal printer to move the substrate as commanded. On the CNC converted 3-D printer, Mach3 is acting in a similar way to Franklin, except that the substrate is stationary and the weld gun is moving as directed by the G-Code. The printing is continued with pausing between layers until the whole model is printed.

Applications of GMAW-based metal 3-D printing are successfully demonstrated by the following printed parts, as seen in Figure 1, Figure 2, Figure 3, Figure 4 and Figure 5. Parts and products, which would be of interest to SMEs or those in developing regions, are focused on here because of the low-cost of the system. The bracket, the hoe, and the chisel were printed on the open-source delta-style metal 3-D printer and the horseshoe, ring stand holder, and axe head were printed on the CNC machine. The handle of the axe was polymer 3-D printed on a larger CNC machine [36] converted to use Franklin (note all such CNC machines could be converted to run free Franklin). These 3-D models as STL files can be found at https://osf.io/bbbtd [37].

This paper has successfully shown applications of low-cost open-source GMAW-based metal 3-D printing, which are relevant to sustainable development. The results show that GMAW-based 3-D printing is capable of distributed manufacturing of useful products by SMEs and individual makers for a wide variety of applications. Metal products and parts can be designed and created using this technology and the low-cost and open-source advantages make it available to everyone. This also gives the user the flexibility to customize the hardware and software for other uses.

The authors would like to thank CNC Router Parts LLC and Miller for support. 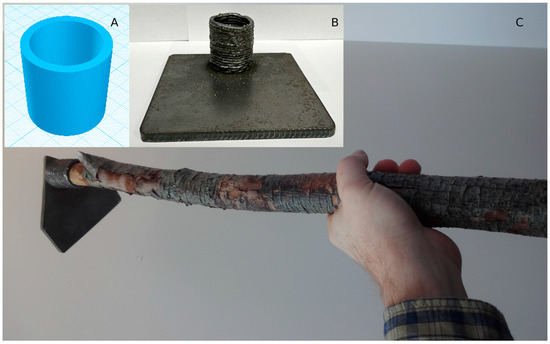 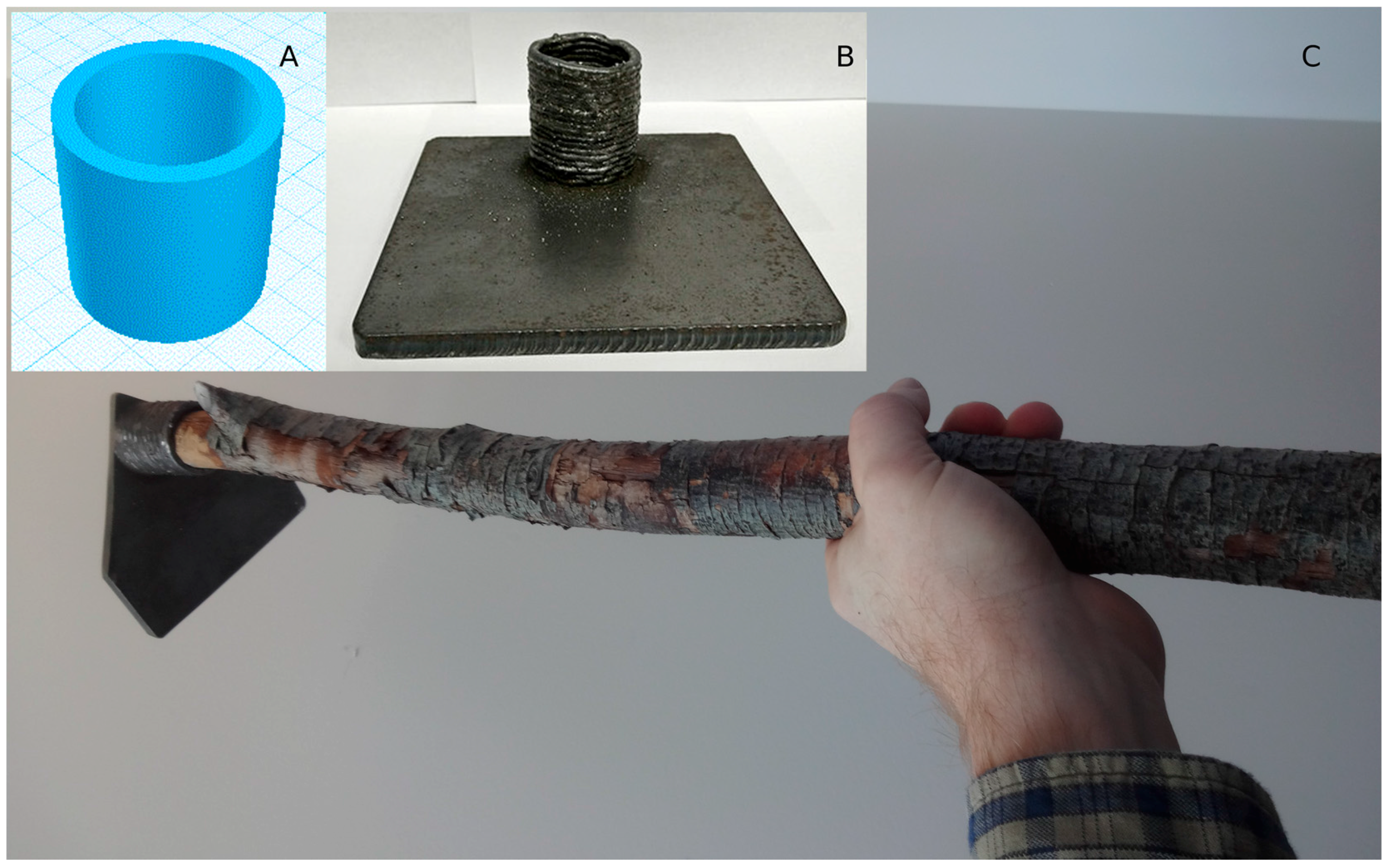 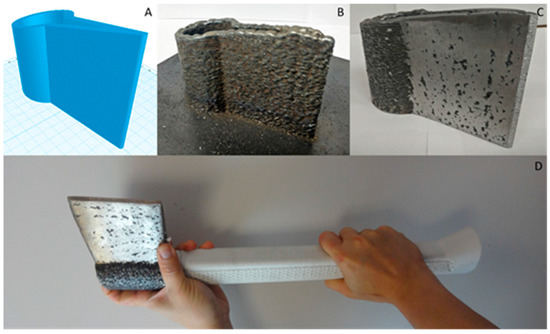 Table 1. Settings for open-source GMAW-based steel 3-D printing.
Table 1. Settings for open-source GMAW-based steel 3-D printing.
© 2018 by the authors. Licensee MDPI, Basel, Switzerland. This article is an open access article distributed under the terms and conditions of the Creative Commons Attribution (CC BY) license (http://creativecommons.org/licenses/by/4.0/).
We use cookies on our website to ensure you get the best experience. Read more about our cookies here.
Accept
We have just recently launched a new version of our website. Help us to further improve by taking part in this short 5 minute survey here. here.
Never show this again