The geometry used for this study is representative of an industrial gas turbine, shown in Figure 3. Previous studies of natural convection flows tend to use very simple geometries, such as a heated concentric cylinder [4], a heated cavity [5], or a heated wall [6,7]. The inclusion of effects such as the blockage from the combustor cans makes a significant difference in the flowfield over the simple test cases.
Other studies using representative gas turbine geometries during shutdown include those of Smith and Neely [8], and Tisarev et al. [9]. These studies were on gas turbines that were much smaller than the large industrial gas turbines, and were operated at lower Rayleigh numbers. A 2D axi-symmetric thermal analysis of a gas turbine was also investigated by Reddy et al. [10] and Selvam et al. [11].
The geometry used in this study consists of a casing outer wall of 3.7 m diameter and an inner wall of 1.32 m diameter, and between these is the main flow cavity. Combustor cans and transition ducts are present in the main cavity and act as a blockage to the flow. The flow enters the cavity though an inlet representing the flow from the compressor exit, followed by a diffuser into the main cavity. From the main cavity, the flow would then go into the 16 combustor cans, which are represented by the 16 circular exits in the front wall of the casing. The combustors are numbered in this paper for identification (Figure 2).
The boundary conditions used in the transient simulations are representative of those from an industrial gas turbine just after shutdown. Over the simulation time period of 50 s, the wall and inlet temperatures are assumed to be constant, as this is much shorter than the shutdown period of several days. The heat fluxes calculated during this period can be used to determine if distortion is likely to occur, by observing the uniformity of the heat flux profile around the casing. As the gas turbine slowly cools, the temperatures are likely to become circumferentially non-uniform. It is believed that the inlet temperature coming from the compressor exit would develop a temperature profile, with hotter fluid towards the top of the inlet. This temperature profile could exacerbate any thermal stratification inside of the outer casing.
The walls all had constant temperature boundary conditions applied. The outer walls used 350 °C, and all of the other walls used 200 °C. The inlet flow from the compressor was also at a constant 200 °C, with the inlet being modelled as a constant pressure inlet. The draught through the engine from the chimney also needed to be included in the simulations. This flow was modelled by a l kg/s target mass flow rate applied at the combustor outlet. For the cases with a purge flow, this was modelled using a mass flow inlet boundary condition with an inlet temperature of 20 °C. For cases using flow extraction, this was modelled using a pressure outlet boundary condition with a target mass flow rate.
The Rayleigh number based on the outer wall diameter D and a reference temperature of 275 °C for this case is . Where is is difference between the outer wall and inlet temperatures, g is the gravitational acceleration, is the thermal expansion coefficient, is the kinematic viscosity and is the thermal diffusivity.

The simulations were performed using ANSYS Fluent v15, using the pressure-based solver with Menter’s k- shear stress transport (SST) turbulence model [12]. A second-order upwind scheme was used for spatial discretization, and a second-order implicit time stepping scheme was used. The simulations were initially run in a steady manner, the results of which were used as the initial conditions for an unsteady simulation. A time-step of 50 ms was used for the simulations, which were run for 1000 time-steps to allow for calculation transients to decay, before averages were calculated over a further 1000 time-steps. The meshes used in the study consisted of 4.6 million cells, and were an unstructured tetrahedral type with prism layers in the boundary layer and a hexahedral core (Figure 4). The prism layers kept the wall around 1 or lower. Simulations were also performed using an 8.8 million cell mesh, and the results were found to agree well with the baseline 4.6 million cell-mesh (Table 1).
The measurement of air temperatures inside of an industrial gas turbine casing during shutdown is very difficult, and hence real engine data for validation is very sparse. However, data is available for a gas turbine casing rig. The test rig shown in Figure 5 is full engine diameter representing a section of gas turbine casing, and operates at real engine Rayleigh numbers. To the authors’ knowledge, this makes the casing rig unique and provides a validation dataset that is not available elsewhere. The numerical method used for this study has previously been applied to the casing rig. Looking at temperature profiles from the rig (Figure 6) shows good agreement between the rig experiment and computational fluid dynamics (CFD). The profile was taken at the top of the rig 15° and 45° from the vertical, where the boundary layer was turbulent.
The combination of previous validated simulations from the test rig as well as performing good CFD practice, checking mesh sensitivity and , gives confidence that the results from this study can be used for a comparison of different shutdown techniques.

A comparison of the contours of heat flux on the cylindrical section of the outer casing for the different methods is shown in Figure 24. It can be seen that the extraction methods give a more uniform heat flux profile than the baseline and purge cases. The differences between the one- and two-hole extractions are fairly small, so the benefits of the two-hole system may not be worth the increased complexity. The extracted mass flow rate can be varied to tune the heat flux profile depending on the results found in service.
The circumferential distribution of wall heat transfer from the baseline case is compared to the 0.13 kg/s extraction case in Figure 25. It can be seen that the profile of outer wall heat transfer is more uniform using the extraction, with a reduction in the difference in heat transfer from the top to the bottom of the casing.

An investigation was conducted into methods for reducing the non-uniformity of heat flux on industrial gas turbine casings during shutdown. Numerical simulations were performed on a geometry that is representative of a section of a large industrial gas turbine. The simulations were run in an unsteady manner, and the results were taken from the time average of the simulations.
A baseline case with no active method for controlling the casing heat flux distribution was found to have lower heat transfer at the top of the casing. This region of low heat transfer would be responsible for casing distortion.
A case with a purge system which injected cool air into the top of the engine casing was then investigated. It was found that the casing heat transfer in the purge case was also non-uniform, with low heat transfer at the top of the casing, which could lead to casing distortion.
A new extraction method for reducing the casing heat flux non-uniformity was then investigated. The casing heat flux distribution in this case was found to be more uniform than both the baseline and purge cases. The initial extraction mass flow rate was 0.13 kg/s, in order to be consistent with the purge case, but other mass flow rates were investigated. This allows some scope for the heat flux profile in the engine to be tuned by adjusting the extracted mass flow rate.
A two-hole extraction method was then tested with the aim of further improving the uniformity of heat flux. It was found that the two-hole method gave results similar to the one-hole extraction.
The extraction method was found to give an improved heat flux distribution over the baseline and purge cases for the initial shutdown period, and could give reduced casing distortion compared to the baseline and purge methods. The extraction method therefore has potential to improve the shutdown performance for both new engine designs and current engines if retrofitted.

A.P. performed the simulations and analysed the results; S.H. contributed the data used in Figure 6; A.P. wrote the paper and was supervised by B.R.

This research and APC was funded by Mitsubishi Heavy Industries Ltd.

Thanks go to Mitsubishi Heavy Industries Ltd. for sponsoring this work.

Mitsubishi Heavy Industries as the funding sponsor provided the data used in Figure 6 and the decision to publish the results. They had no direct role in the collection, analyses, or interpretation of the data. 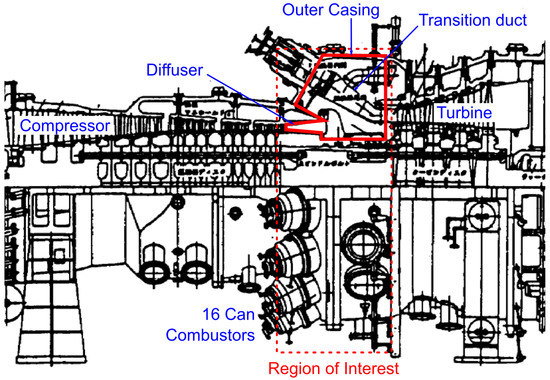 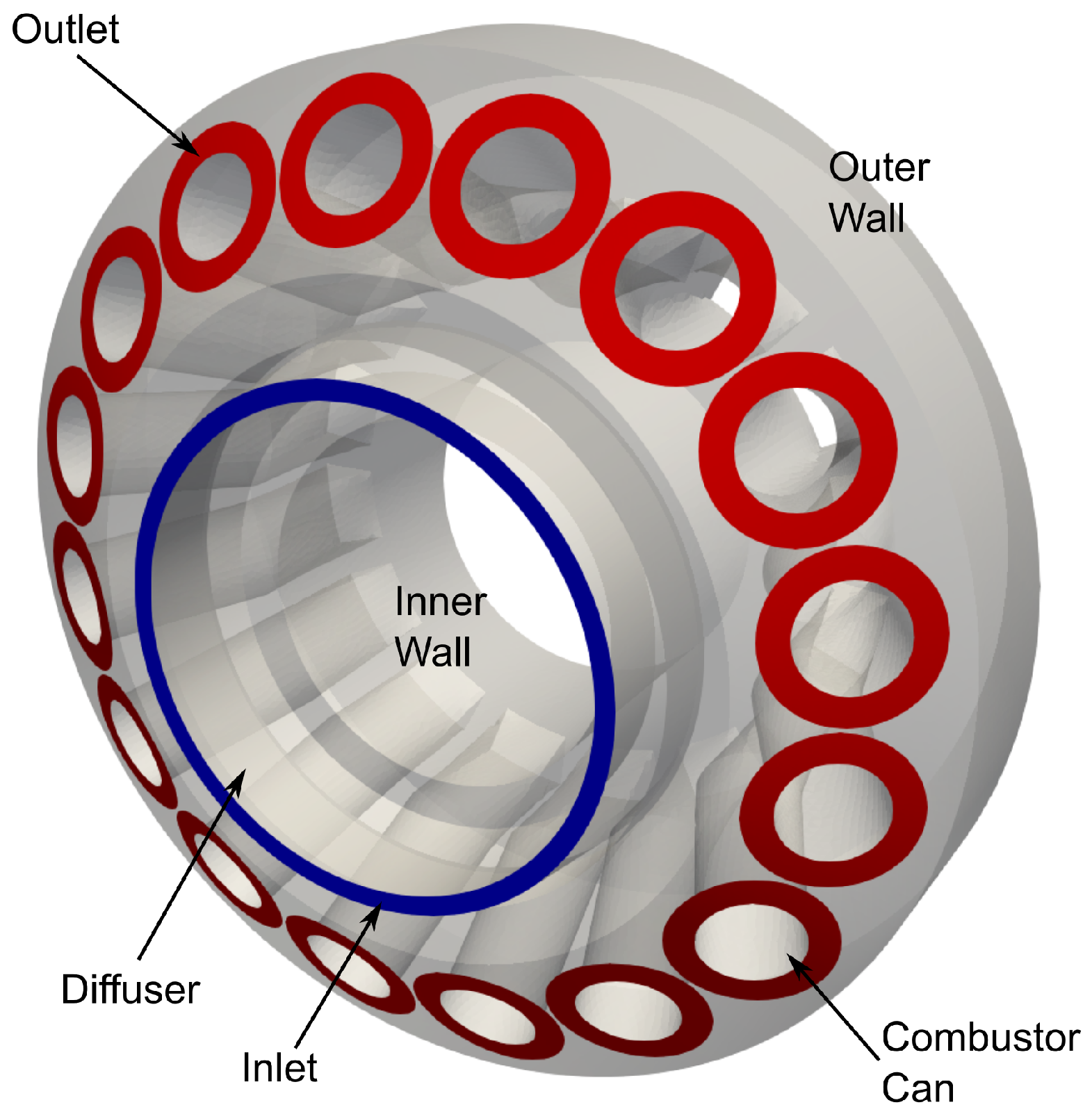 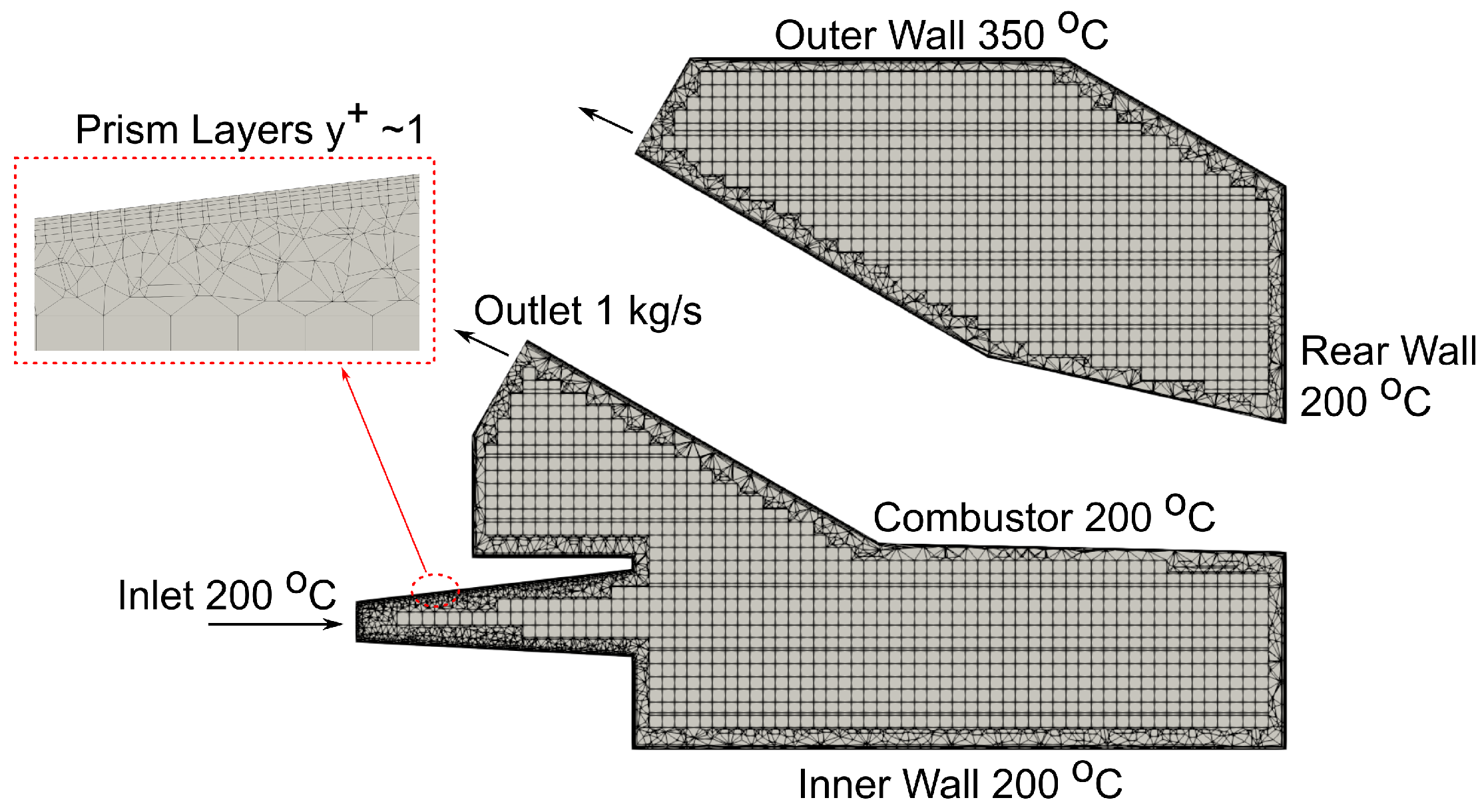 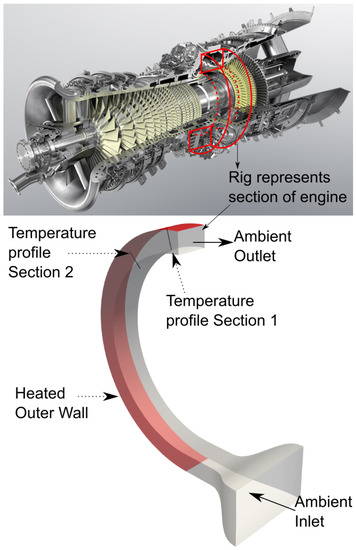 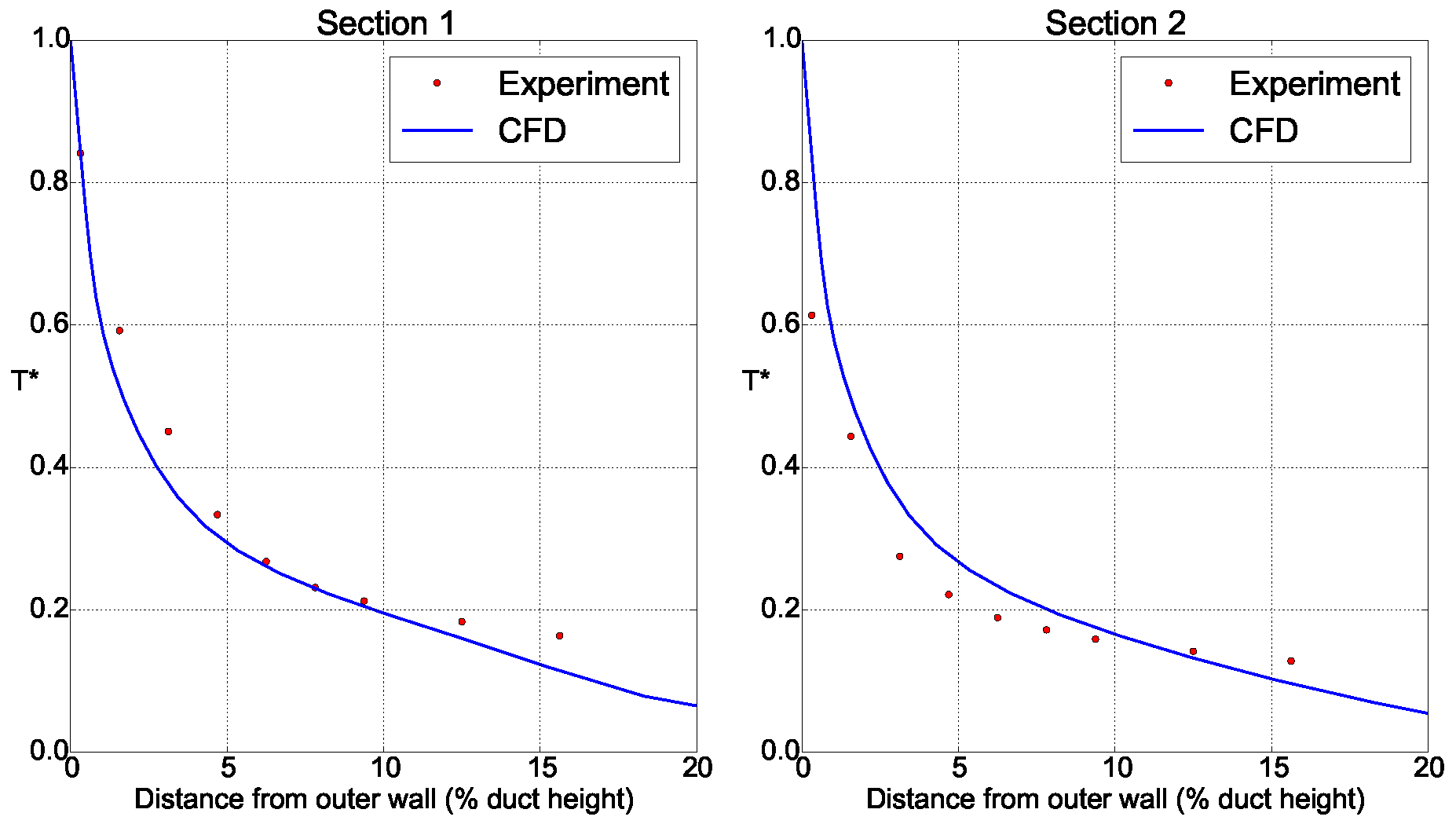 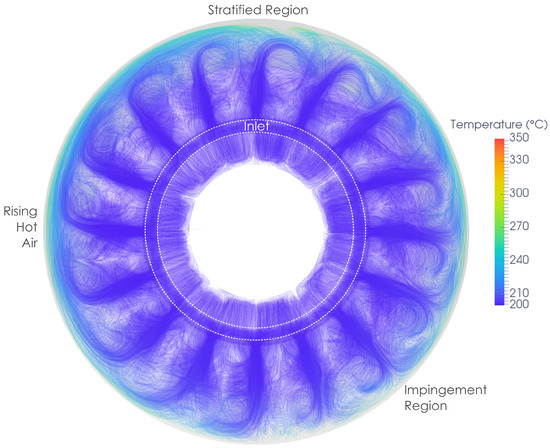 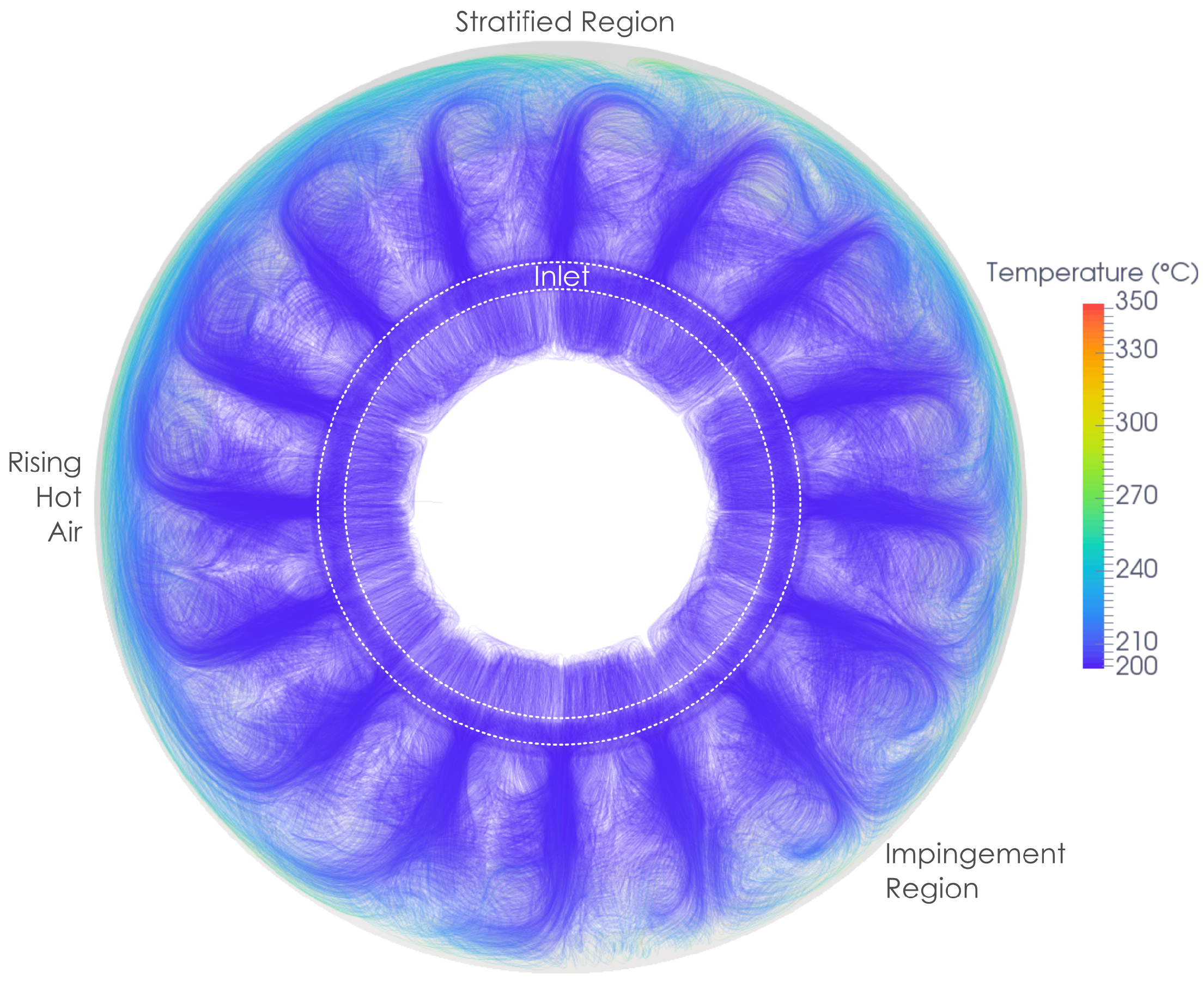 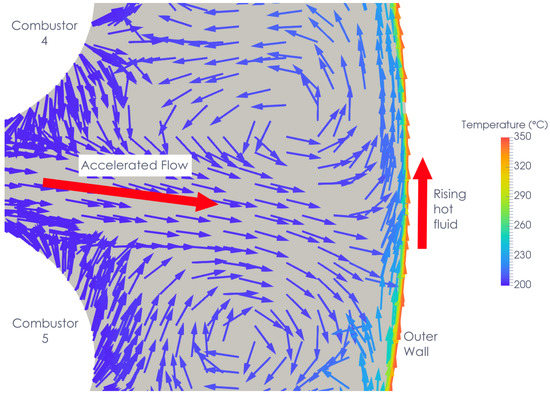 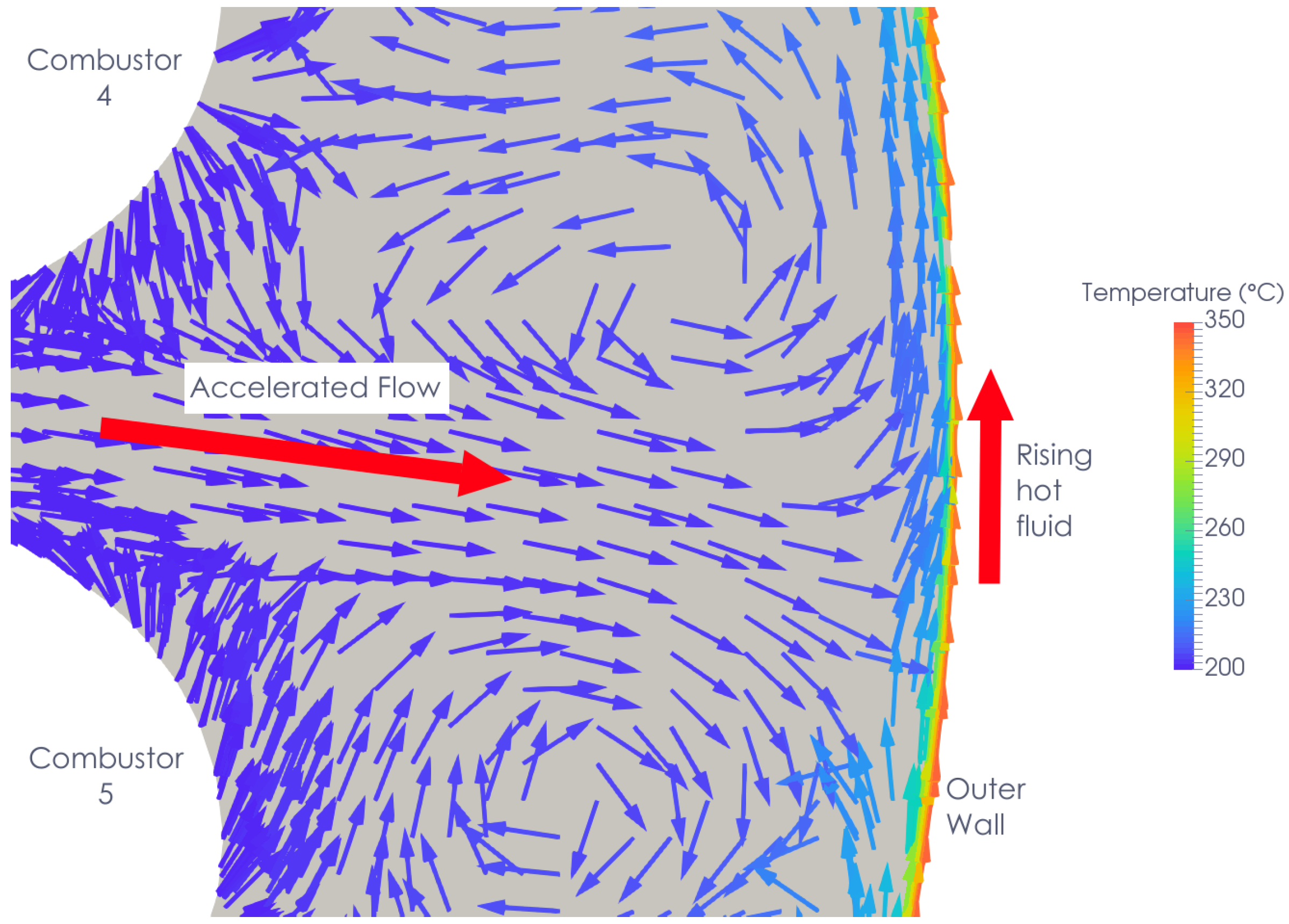 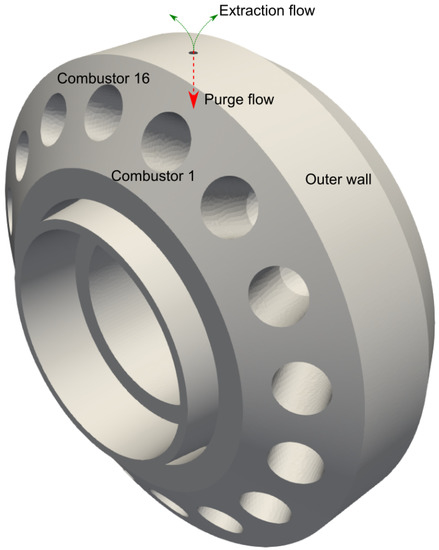 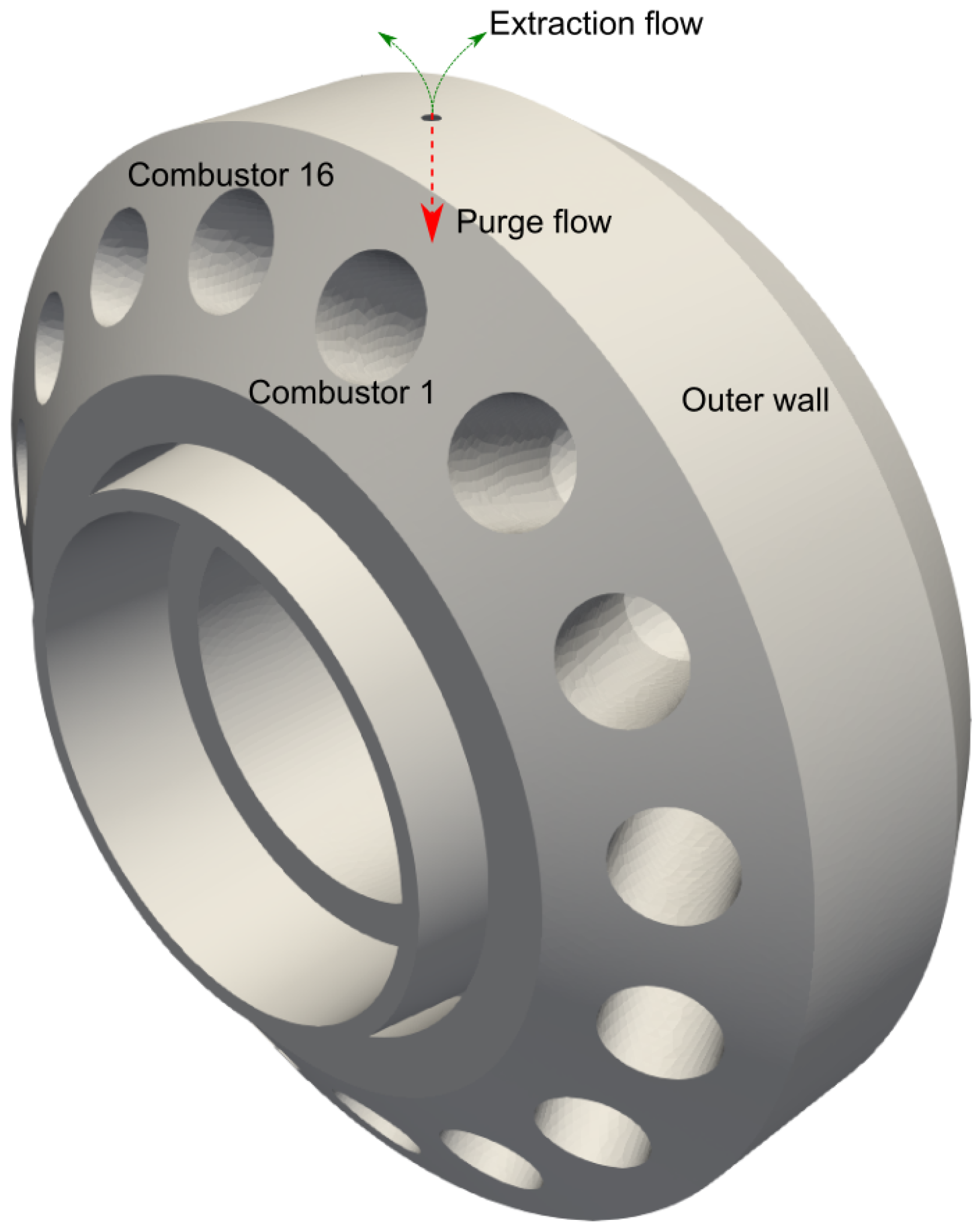 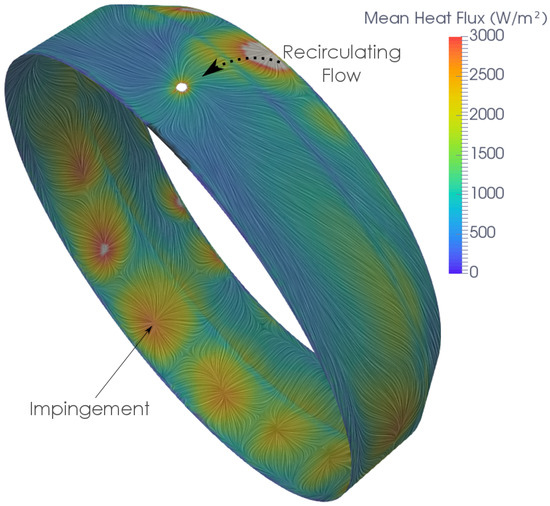 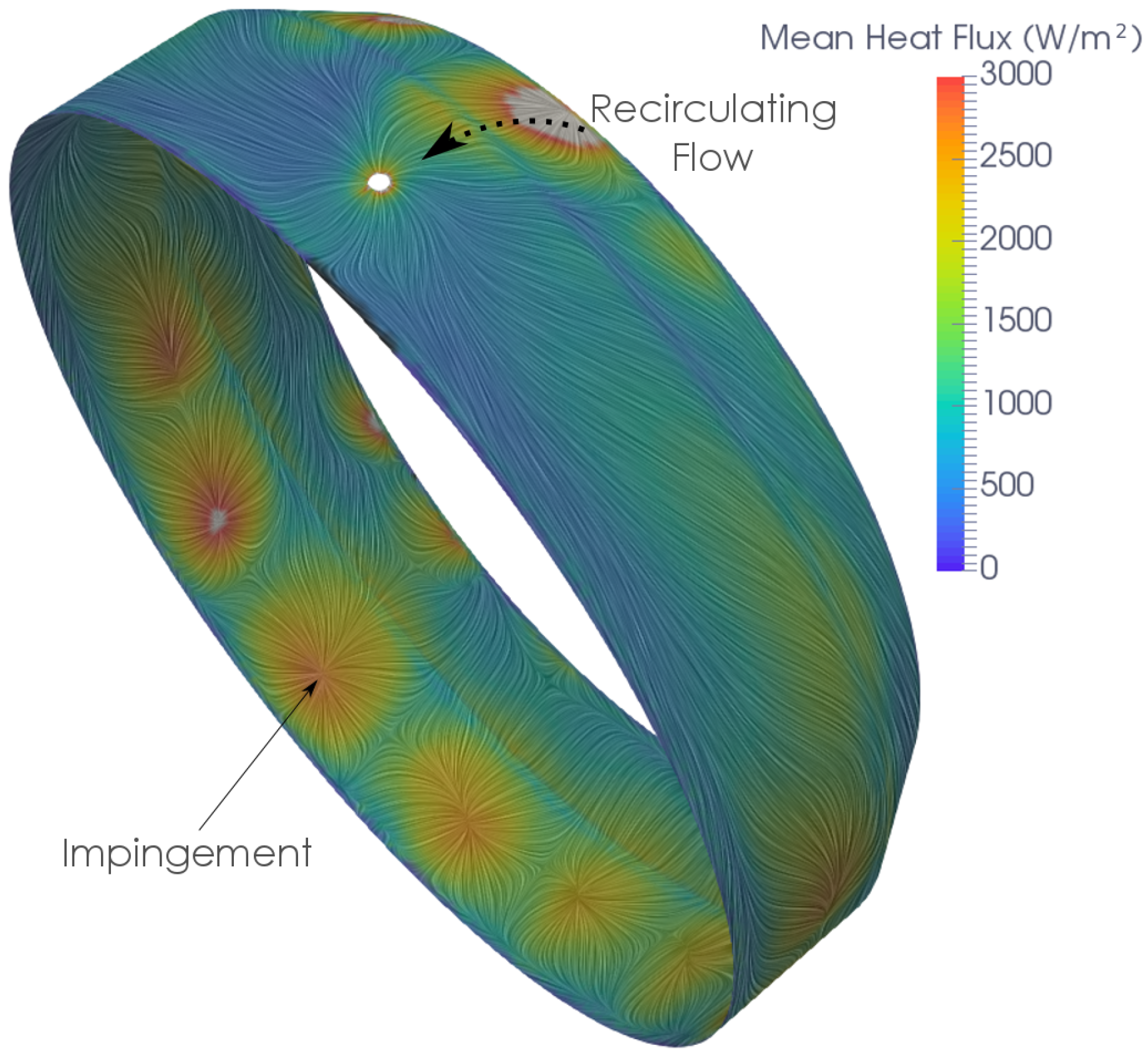 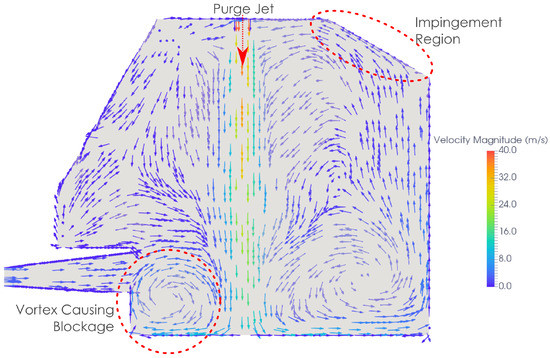 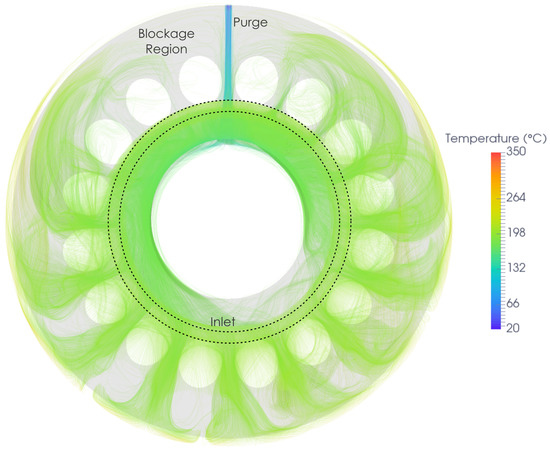 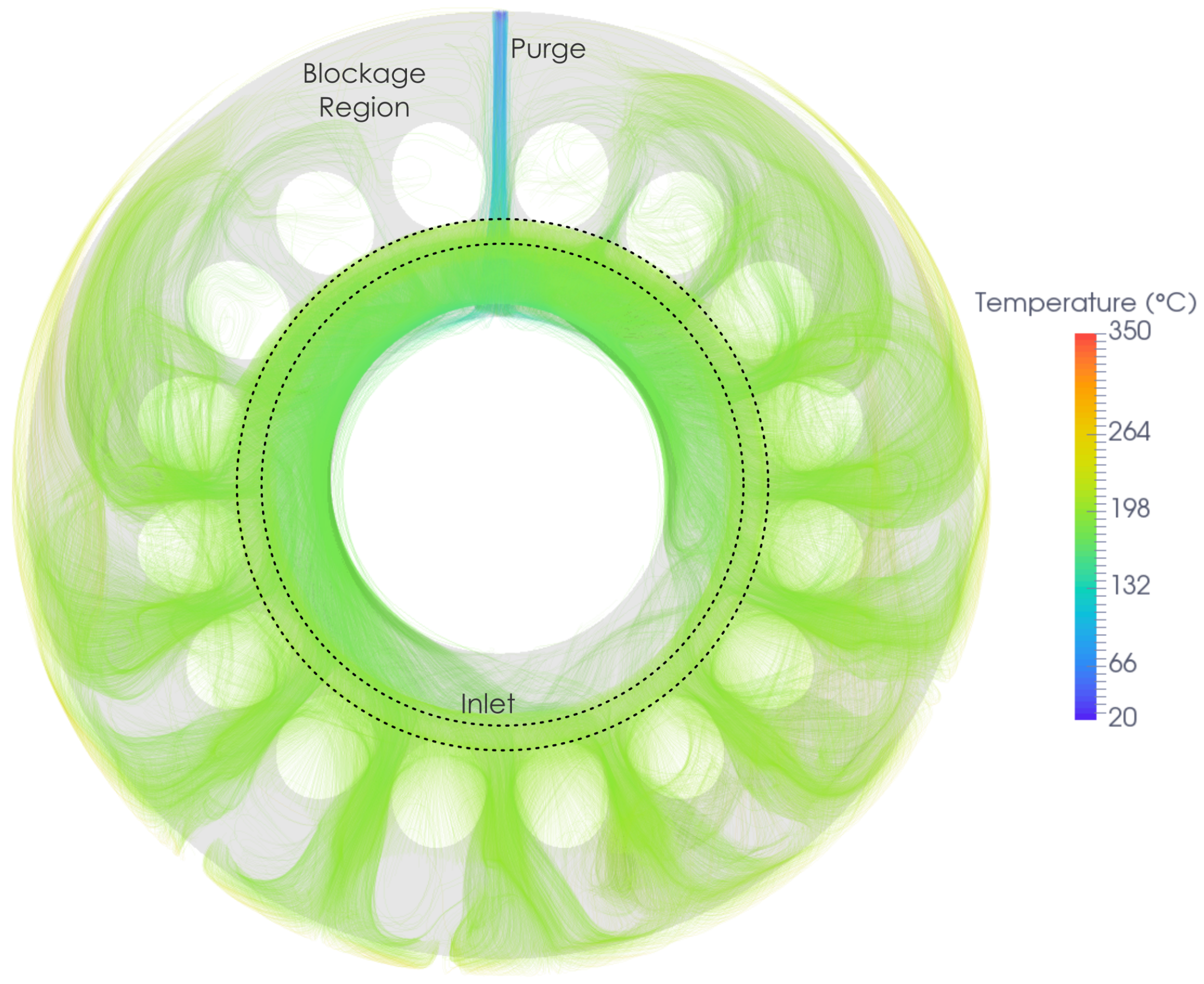 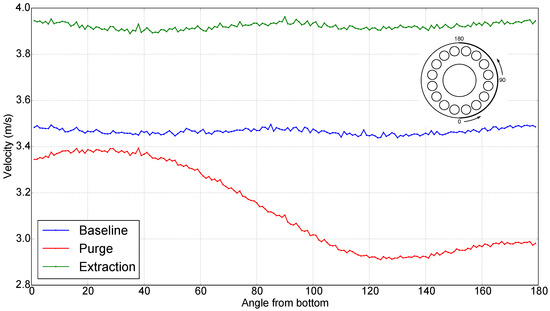 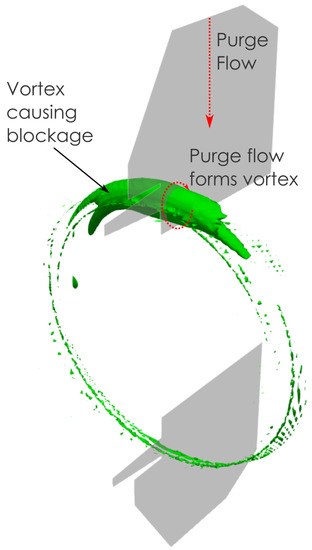 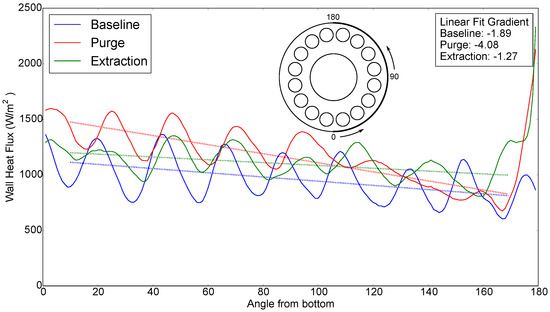 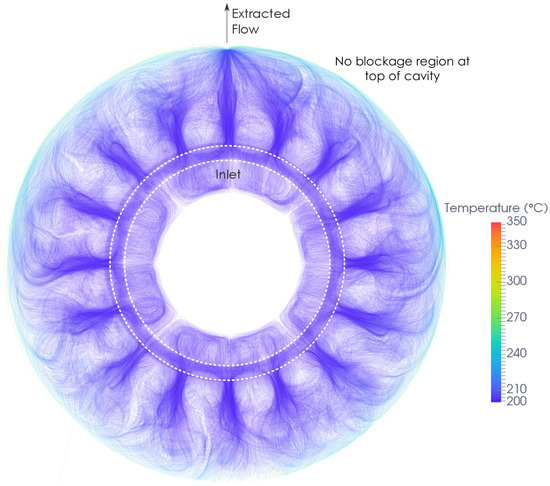 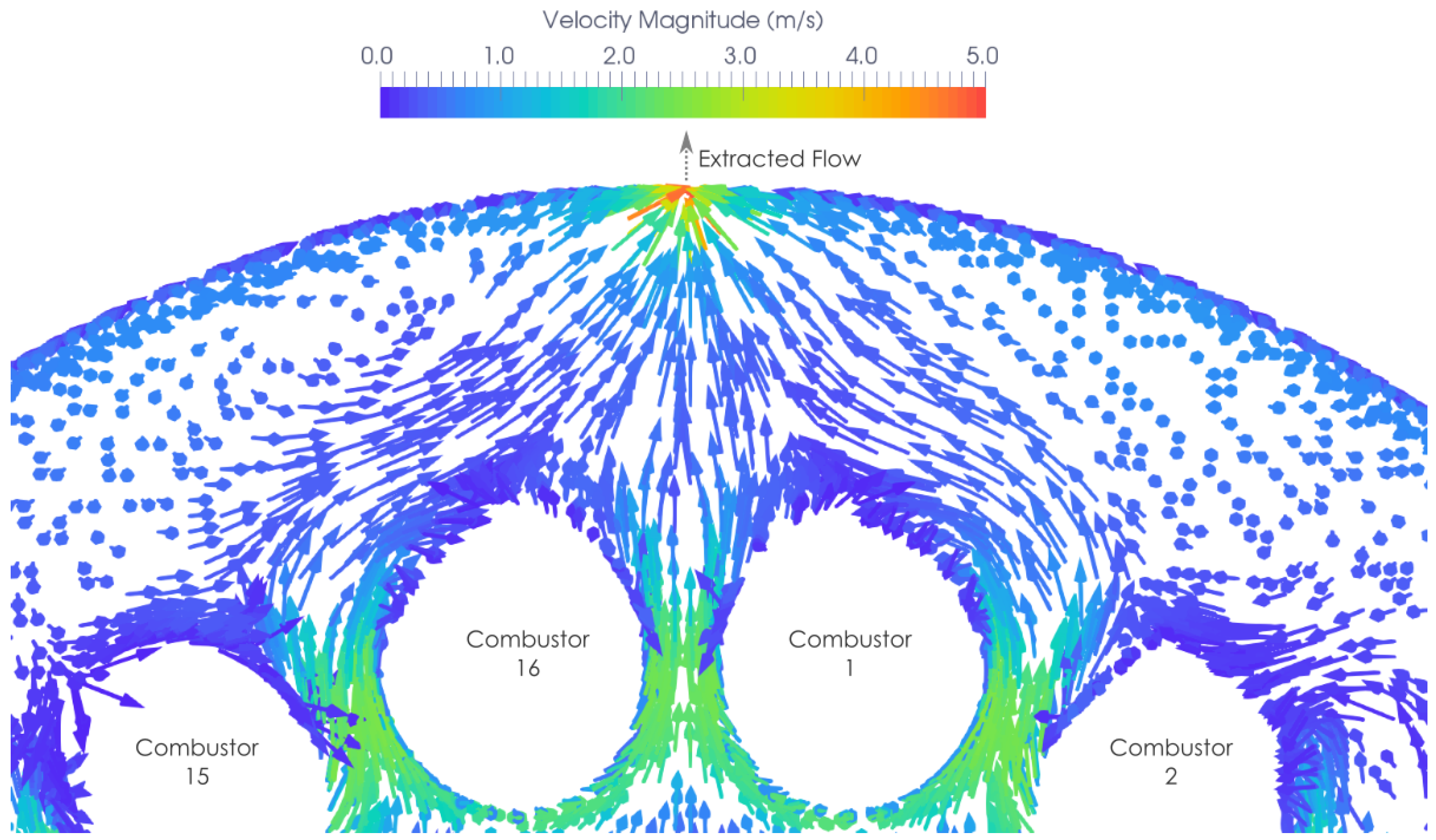 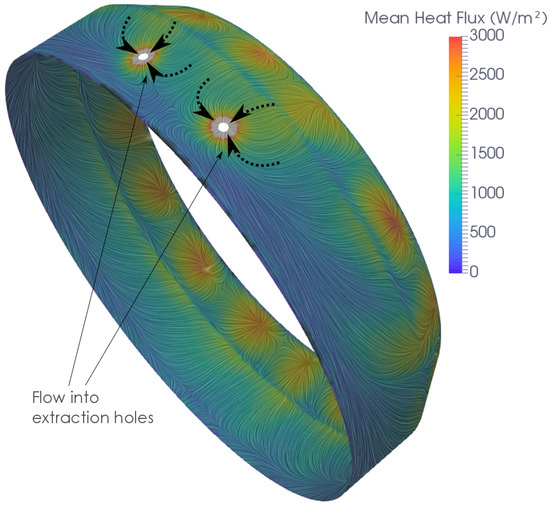 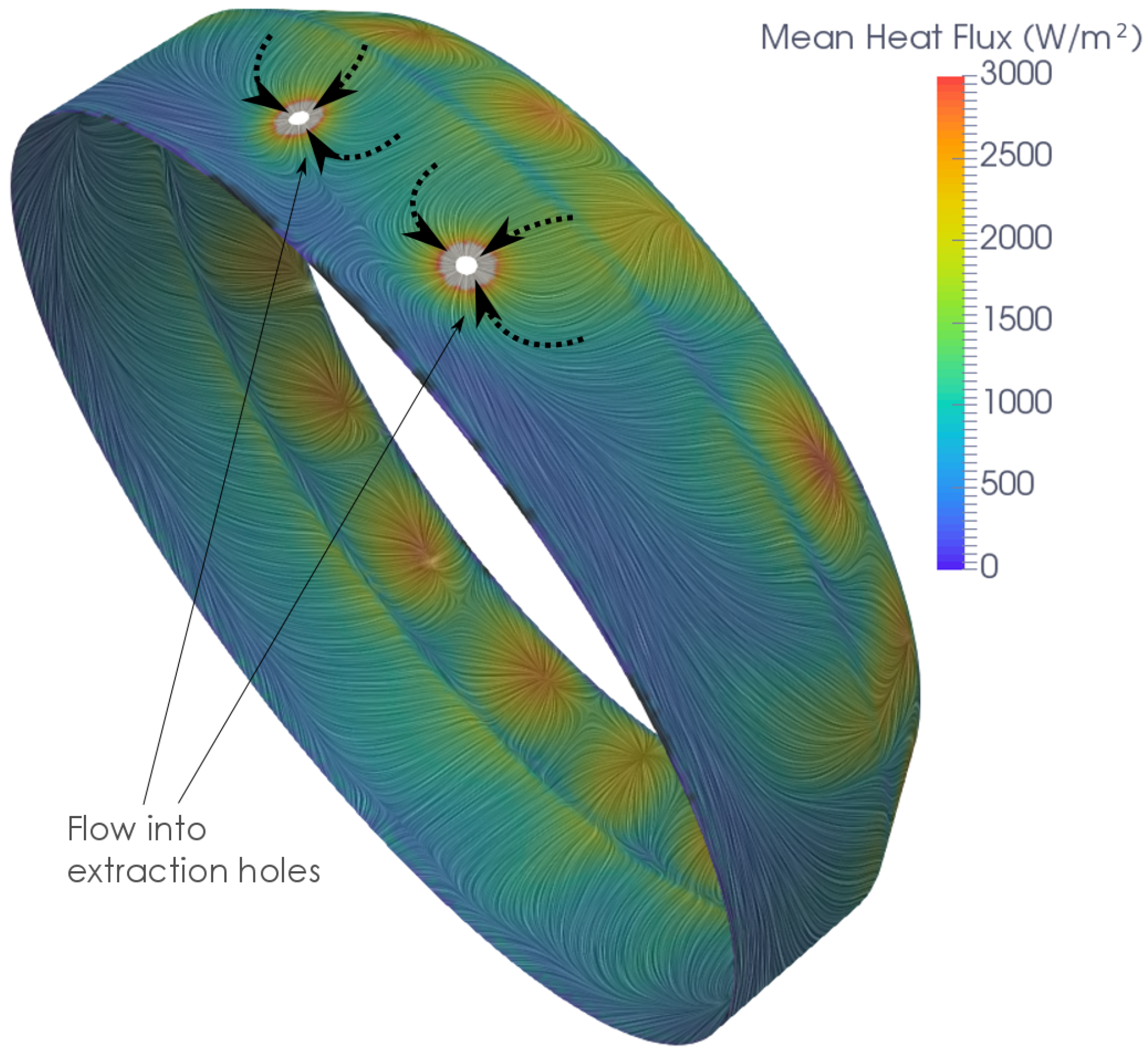 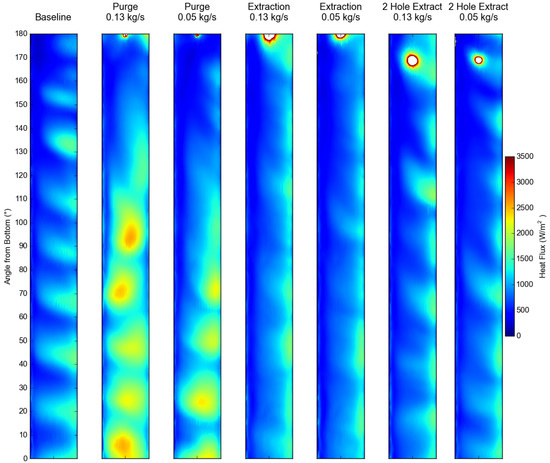 Table 1. Mesh independence study.
Table 1. Mesh independence study.
© 2018 by the authors. Licensee MDPI, Basel, Switzerland. This article is an open access article distributed under the terms and conditions of the Creative Commons Attribution (CC BY-NC-ND) license (https://creativecommons.org/licenses/by-nc-nd/4.0/).
We use cookies on our website to ensure you get the best experience. Read more about our cookies here.
Accept
We have just recently launched a new version of our website. Help us to further improve by taking part in this short 5 minute survey here. here.
Never show this again