In Silico Structural and Functional Characterization of HtrA Proteins of Leptospira spp.: Possible Implications in Pathogenesis
Previous Article in Journal

Relative Frequency of Blastocystis Subtypes 1, 2, and 3 in Urban and Periurban Human Populations of Arequipa, Peru

Blastocystis is one of the most common protozoa found in the human gut and are genetically diverse and widely distributed around the world. Nonspecific and inconsistent symptoms have been associated with this protozoon; thus, its clinical importance remains controversial. Our aim was to estimate the relative frequency of Blastocystis subtypes 1, 2, and 3, which are the predominant subtypes reported in South America, based on conserved regions of SSU rDNA sequences and determine the factors associated with them. A total of 116 Blastocystis-positive stool samples were processed using conventional PCR with Blastocystis-specific primers. We identified subtype 1 (10.3%), subtype 2 (7.8%), subtype 3 (25.0%), and mixed subtype infections (8.7%). However, we could not identify any Blastocystis subtypes in 48.3% of the samples; therefore, it is likely that other subtypes were present in the area. No association was found between any gastrointestinal symptom and single or mixed Blastocystis subtypes. We found a statistically significant association between Blastocystis subtype 2 and irritable bowel syndrome (OR = 17.8, 95% CI = 1.5–408.4, p = 0.039); however, the number of samples with IBS was small (n= 4). There was no association between the Blastocystis subtypes and any epidemiological variable studied. In rural populations, we only identified subtype 1, while in urban and periurban populations, we identified subtypes 1, 2, and 3. View Full-Text
Keywords: Blastocystis; protozoon; controversial; epidemiological variables; symptoms Blastocystis; protozoon; controversial; epidemiological variables; symptoms
►▼ Show Figures 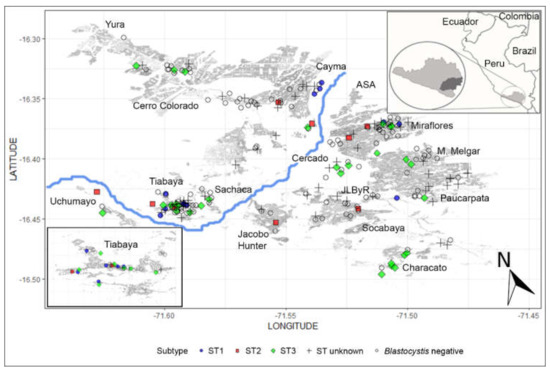