Adapting Urban Light-Rail Transport to the African Context: A Process Conducted by Transport Authorities and Chinese Rail Corporations in Addis-Ababa, Abuja, and Lagos
Next Article in Special Issue

Observing air quality from sensors onboard light rail cars in Salt Lake County, Utah began as a pilot study in 2014 and has now evolved into a five-year, state-funded program. This metropolitan region suffers from both elevated ozone levels during summer and high PM2.5 events during winter. Pollution episodes result predominantly from local anthropogenic emissions but are also impacted by regional transport of dust, chemical precursors to ozone, and wildfire smoke, as well as being exacerbated by the topographical features surrounding the city. Two electric light-rail train cars from the Utah Transit Authority light-rail Transit Express (“TRAX”) system were outfitted with PM2.5 and ozone sensors to measure air quality at high spatial and temporal resolutions in this region. Pollutant concentration data underwent quality control procedures to determine whether the train motion affected the readings and how the sensors compared against regulatory sensors. Quality assurance results from data obtained over the past year show that TRAX Observation Project sensors are reliable, which corroborates earlier preliminary validation work. Three case studies from summer 2019 are presented to illustrate the strength of the finely-resolved air quality observations: (1) an elevated ozone event, (2) elevated particulate pollution resulting from 4th of July fireworks, and (3) elevated particle pollution during a winter time inversion event. The mobile observations were able to capture spatial gradients, as well as pollutant hotspots, during both of these episodes. Sensors have been recently added to a third light rail train car, which travels on a north–south oriented rail line, where air quality was unable to be monitored previously. The TRAX Observation Project is currently being used to provide reliable pollutant data for health studies and inform urban planning efforts. Links to real-time data displays and updated information on the quality-controlled data from this study are available on the webpage for the Department of Atmospheric Sciences at the University of Utah. View Full-Text
Keywords: air quality; mobile observations; light rail; particulate matter; ozone; health outcomes; urban pollution; wildfires; air quality policy; environmental justice air quality; mobile observations; light rail; particulate matter; ozone; health outcomes; urban pollution; wildfires; air quality policy; environmental justice
►▼ Show Figures 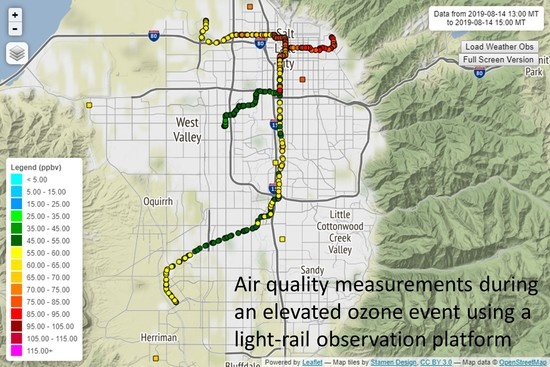