In a highly and rapidly urbanized world, the effect of the action of urban development is determinant for the physical, social, and economic conditions of its citizens, among which is inequality. It is even more crucial for developing regions such as Latin America on which this research is conducted. Therefore, the focus of the investigation was to determine the existence of significant statistical relationships between urban development and economic inequality in the region. For this purpose, it was sought to define urban development from the perspective of the praxis of multilateral organizations measured by indicators of extensive use among them. A hierarchical multiple linear regression model was built with six urban development variables predictors of the Gini coefficient as an indicator of economic inequality, in which data of 49 Latin American cities was used. The application of the method allowed us to discover a stochastic behavior of interaction between those multidimensional systems and confirmed the statistical relation. The research allows having a tool for the formulation of public policies that seek to strengthen local governance, promote community organization and participation, and assert urban planning as an agent for concerted efforts to achieve common goals. View Full-Text
Keywords: urban planning; inequality; development; Latin America; regional economics urban planning; inequality; development; Latin America; regional economics
►▼ Show Figures 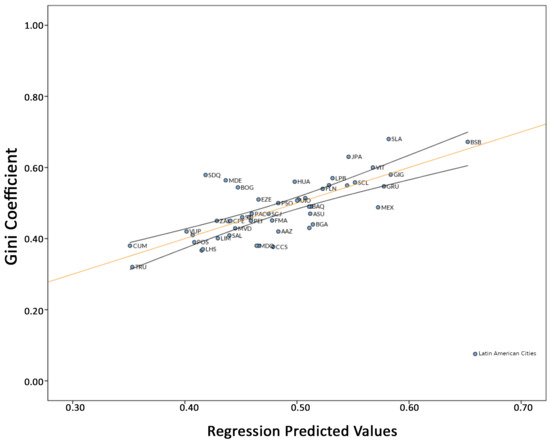