Green and Blue Infrastructure in Darwin; Carbon Economies and the Social and Cultural Dimensions of Valuing Urban Mangroves in Australia

Understanding human mobility patterns becomes essential in crisis management and response. This study analyzes the effect of two hurricanes in the United States on human mobility patterns, more specifically on trip distance (displacement), radius of gyration, and mean square displacement, using Twitter data. The study examines three geographical regions which include urbanized areas (Houston, Texas; Miami-Dade County, Florida) and both rural and urbanized areas (North and South Carolina) affected by hurricanes Matthew (2016) and Harvey (2017). Comparison of movement patterns before, during, and after each hurricane shows that displacement and activity space decreased during the events in the regions. Part of this decline can be potentially tied to observed lower tweet numbers around supply facilities during hurricanes, when many of them are closed, as well as to numerous flooded and blocked roads reported in the affected regions. Furthermore, it is shown that displacement patterns can be modeled through a truncated power-law before, during, and after the analyzed hurricanes, which demonstrates the resilience of human mobility behavior in this regard. Analysis of hashtag use in the three study areas indicates that Twitter contributors post about the events primarily during the hurricane landfall and to some extent also during hurricane preparation. This increase in hurricane-related Twitter topics and decrease in activity space provides a tie between changed travel behavior in affected areas and user perception of hurricanes in the Twitter community. Overall, this study adds to the body of knowledge that connects human mobility to natural crises at the local level. It suggests that governmental and rescue operations need to respond to and be prepared for reduced mobility of residents in affected regions during natural crisis events. View Full-Text
Keywords: natural crisis; hurricane; human mobility; twitter; social media natural crisis; hurricane; human mobility; twitter; social media
►▼ Show Figures 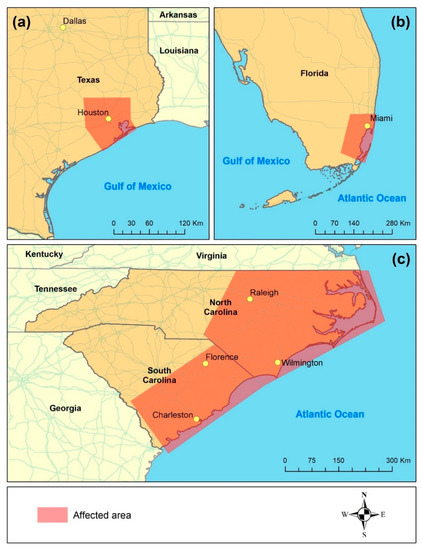