The present study aimed to investigate the chemical profile and the protective activity on fibroblasts of two Matricaria species: M. pubescens, which grows wild in Algeria, and M. recutita, which is cultivated in Greece. A comparative phytochemical investigation using High-Performance Liquid Chromatography, coupled with Photodiode Array Detection and Mass Spectrometry (HPLC–PDA–MS) combined with Nuclear Magnetic Resonance (NMR), was performed for the identification of the main constituents in the flowerheads of these medicinal plants. In M. pubescens more than 25 compounds were identified and/or isolated; among them are quercetagenin-3-O-glucopyranoside, reported for the first time in Matricaria sp., and two polyamines previously reported in other Asteraceae species. In M. recutita, which is the officially recognized species in Europe, 19 constituents were identified. To minimize time analysis, the structure elucidation was based on a multi-analytical approach directly on subfractions. Two representative polar extracts from each species were characterized chemically and further screened for their protective effects on 3T3 fibroblasts. The cells were exposed to a mild toxic dose of UVA light (6 J/cm2), in the presence of different concentrations of the extracts. Both M. recutita and M. pubescens extracts were effective. The methanolic extract was the best protective agent at lower concentrations (0.1 to 10 μg/mL), and hydromethanolic was best at higher ones (100–200 μg/mL). M. recutita exhibited the most enhanced cell viability in relation to those not exposed to UV control; it ranged from of 28 to 49% higher viability, depending on the dose, leading to the conclusion that the latter seems to exhibit potent cytoprotective activity and significant regeneration activity. View Full-Text
Keywords: Matricaria pubescens; Matricaria recutita; HPLC–PDA–MS; BALbC 3T3 fibroblasts Matricaria pubescens; Matricaria recutita; HPLC–PDA–MS; BALbC 3T3 fibroblasts
►▼ Show Figures 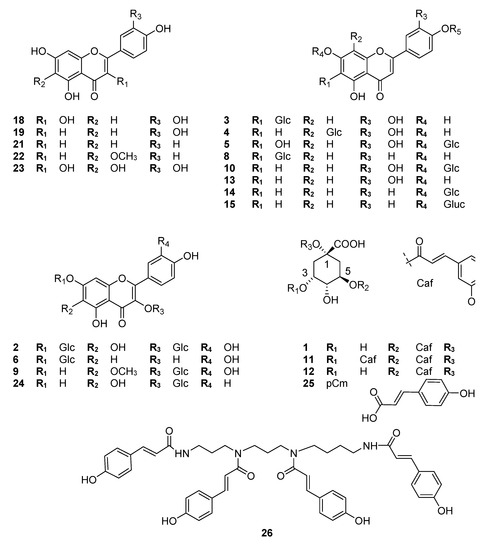