The world is currently facing a serious pandemic of coronavirus disease 2019 (COVID-19) which started in Wuhan, China, and was then transmitted rapidly to other countries. Countries applied different methods and procedures in an attempt to prevent or reduce and/or control the incidence of cases and manage existing ones. This paper discusses the methods and procedures applied by Kuwait to control this epidemic, and how effective they have been. The State of Kuwait followed WHO, European CDC, US CDC, and/or other countries’ institutional guidelines, and is still working on containing the disease, given the rising number of cases among Kuwaitis returning from affected areas such as the UK and USA, and migrant workers who share the burden, given their living conditions.
Keywords: coronavirus; COVID-19; 2019-nCoV; novel (new) coronavirus; pandemic control coronavirus; COVID-19; 2019-nCoV; novel (new) coronavirus; pandemic control

A review of existin data in Kuwait was used to summarize the precautions and procedures taken in the State of Kuwait during the outbreak.
According to updates from the Ministry of Health [20], the first day on which coronavirus cases were detected in Kuwait was 24 February 2020, with five cases; the number then increased day by day until 17 cases were recorded on 27 February, although on the following day only two cases were recorded, and after that, on some days, no cases at all. The highest number of recorded cases, 20, was on the 13 March, and on that day, the government announced a holiday for all employees in Kuwait in order to limit human contact, and hence, reduce and eliminate the incidence of cases from airborne person-to-person transmission. On the following day, four new cases were reported, with two in a critical condition, and on 22 March, 12 cases were reported, bringing the total in Kuwait to 188, five of them in a critical condition. The number of cases continues to fluctuate; this may be due to some people still going outdoors, not using hygiene products, or gathering indoors to attend social events.
According to the Ministry of Health’s spokesperson [20], the strategy to control the COVID-19 pandemic in Kuwait follows the WHO-recommended procedures at three levels. The first covers the stages of transmission: 1. no cases; 2. first cases from Iran; 3. cluster of cases among migrant workers; and 4. community transmission, the current situation. The second level includes procedures that are specific to Kuwait, such as in the case of migrant workers; for migrant workers in factories, the Public Authority for Industry, in coordination with government agencies and the private sector, allowed employers to temporarily accommodate them for a period of six months within the limits of those factories or adjacent sites. Also, Kuwait Airport has been using thermal cameras to detect any suspected coronavirus cases from abroad. The third level comprises additional measures, with public health and social measures that include lockdown and curfew.
At the third level, the government introduced the following procedures and precautions (Figure 1) to control transmission of the virus:
Penalties have been announced for anyone caught breaking the coronavirus curfew in Kuwait. They will be jailed for up to three years and fined 10,000 Kuwaiti dinars ($32,000), in line with the new laws reported by the country’s deputy prime minister on Sunday 22 March. The lockdown was decided as part of stricter government measures to control the spread of the coronavirus, including the partial curfew until further notice and extending the closure of all state institutions until 26 April.
Currently, the Ministry of Health is calling upon recovered cases for blood donations, to obtain the plasma from their blood to cure current patients. This has been shown to be an effective treatment tested and applied successfully in some countries, including China, France, Philippines, Italy and USA.
As shown in the Ebola outbreak, infections and deaths in health care settings could be easily prevented with adequate knowledge and training of the PPE (personal protective equipment) that represent useful preventive measures [21]. In this COVID-19 pandemic, as Cook [22] said, “PPE is a current hot topic, probably the most talked about and emotive subject for front-line healthcare staff working with patients with coronavirus disease (COVID-19)”. He pointed out that there are two main related problems: shortages of equipment; and inappropriate use of equipment, which are common in most countries including Kuwait.

As countries worldwide are still dealing with the pandemic, Kuwait has taken effective procedures and measures to control and limit the incidence of the disease, with the aim of completely eliminating it. These procedures and methods were set gradually, as outlined above, starting from using thermal cameras in airports to detect suspected cases in order to isolate and treat them.
Tools of molecular biology diagnosis of symptomatic/asymptomatic contacts are being utilized for people coming from abroad, people who feel sick and have fever, and people who have been in direct contact with an infected person [20]. In addition, Kuwait has now introduced a phone app for contact tracing. There are now FDA (US Food and Drug Administration)-approved tests, used in rapid “point-of-care” COVID-19 detection. The tests, using molecular methods, make it possible to detect the coronavirus within 45 minutes.
Although thermal cameras have helped in detecting suspected coronavirus cases, this method is insufficient on its own, and should be combined with other methods and technologies for more effective, accurate and comprehensive information, to support better risk management and decision making [1,23,24]. Kuwait has since implemented more methods to reduce and control the disease, which resulted in a significant decrease in the diagnosed cases (i.e., after the national holiday). The government effectively instituted public health and social measures that include personal protective measures (hand washing, the use of a cloth face mask before entering any grocery store), environmental measures, physical distancing measures, and travel-related measures.
During April the number of recorded cases fluctuated, but did not reach a new peak until a maximum of daily cases of 161 on 11 April. Figure 1 shows that as of 16 April 2020, Kuwait had 1,405 cases, 225 recovered and 3 deaths [20]. Indeed, the Kuwaiti Ministry of Health announced that 161 people had been infected in just 24 hours [16]. They added that 127 cases were found among people who were with infected patients (4 Kuwaiti citizens, 101 Indian residents, 15 Bengali, one Saudi, one Filipino, one Jordanian, and one Pakistani), through community transmission; the majority were high-risk migrant workers and the rest were travel-related cases.
Figure 2 shows the daily COVID-19 cases in Kuwait by source, indicating a decrease from the 11 April peak. Indeed, the first cases came from Iran, followed by cases from other countries including USA and UK, and the cases through community transmission involving migrant workers. Targeted intervention measures within migrant workers’ communities in Kuwait substantially lowered the magnitude and the number of spreading and clustering events respectively [17].
As of 17 April, out of 1658 cases reported by the Ministry of Health’s Media Office, Indian expatriates represented 55.7% of cases (924)), while Kuwaiti cases were 19.7% (327), followed by Bangladeshi 7.7% (128), Egyptian 6.6% (109) along with expatriates from other countries with fewer cases (see Figure 3). Figure 4 shows that three weeks after April 17, 2020 (by the 11th of May, 2020), on a global COVID-19 trajectory, USA was at the top and Kuwait at the bottom. Kuwait’s counter-measures and strategies, with only 65 deaths, are clearly more effective than those in the USA, and in the European countries. Indeed, the country was praised by WHO in this regard since in the Middle East, Kuwait was also more successful than neighboring countries.

The State of Kuwait has cooperated on both the national and international levels to reduce and control COVID-19 by applying a combination of methods and procedures to overcome this epidemic. However, this does not mean that the problem is solved, nor can continuing reductions in case numbers and eliminating the disease in Kuwait be guaranteed. These methods and procedures need to be applied over a longer period, not only in Kuwait, but also worldwide, adding further new effective methods and procedures as they become available, especially should an effective vaccine be developed and deployed. Kuwait’s strategies are working better than in the Gulf countries, USA, and European countries. As this point, Kuwait is dealing with two major sources of coronavirus, that is, Kuwaitis returning from affected countries such as the UK and USA, and migrant workers, most of whom are Indians, due to their cramped living conditions. Indeed, Alkhamis et al. [17] pointed out the importance of maintaining migrant workers’ health and living conditions in limiting the transmission of COVID-19 in Kuwait. A high contact rate among the population in Kuwait implies that the epidemic peak value is yet to be reached and that more strict intervention measures must be incorporated [25]. If all nations manage their cases correctly, we should see the end of the pandemic soon. However, if the WHO-recommended public health and social measures (listed below) are not strictly followed by all affected countries, we will keep losing lives.
The best public health measures that have been suggested by WHO and other public health organizations include, but are not limited to, the following:

Conceptualization, M.S. and J.G.; methodology, M.S. and J.G.; writing—original draft preparation, M.S.; writing—review and editing, J.G. These authors contributed equally to this work. All authors have read and agreed to the published version of the manuscript. 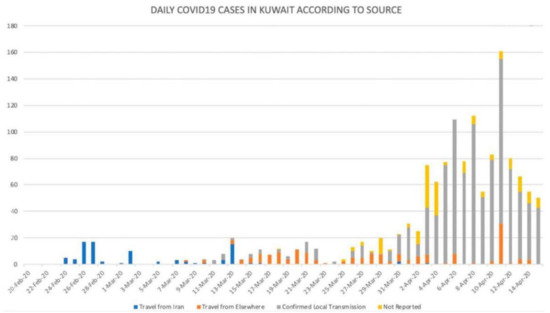 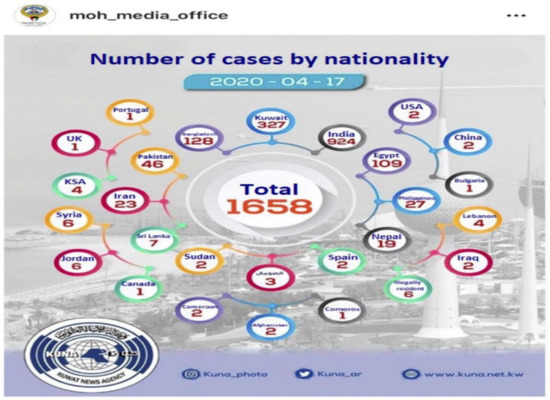 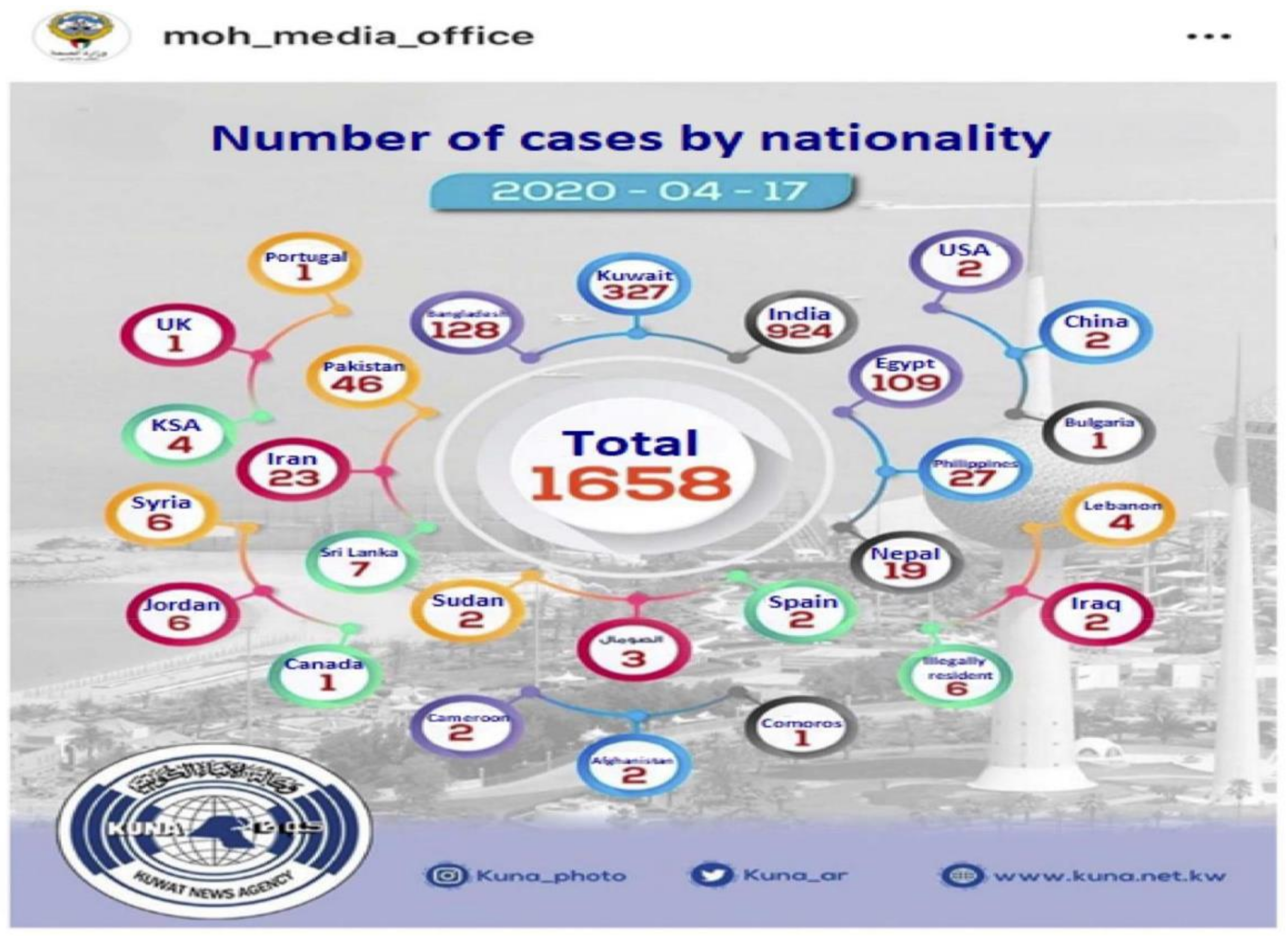 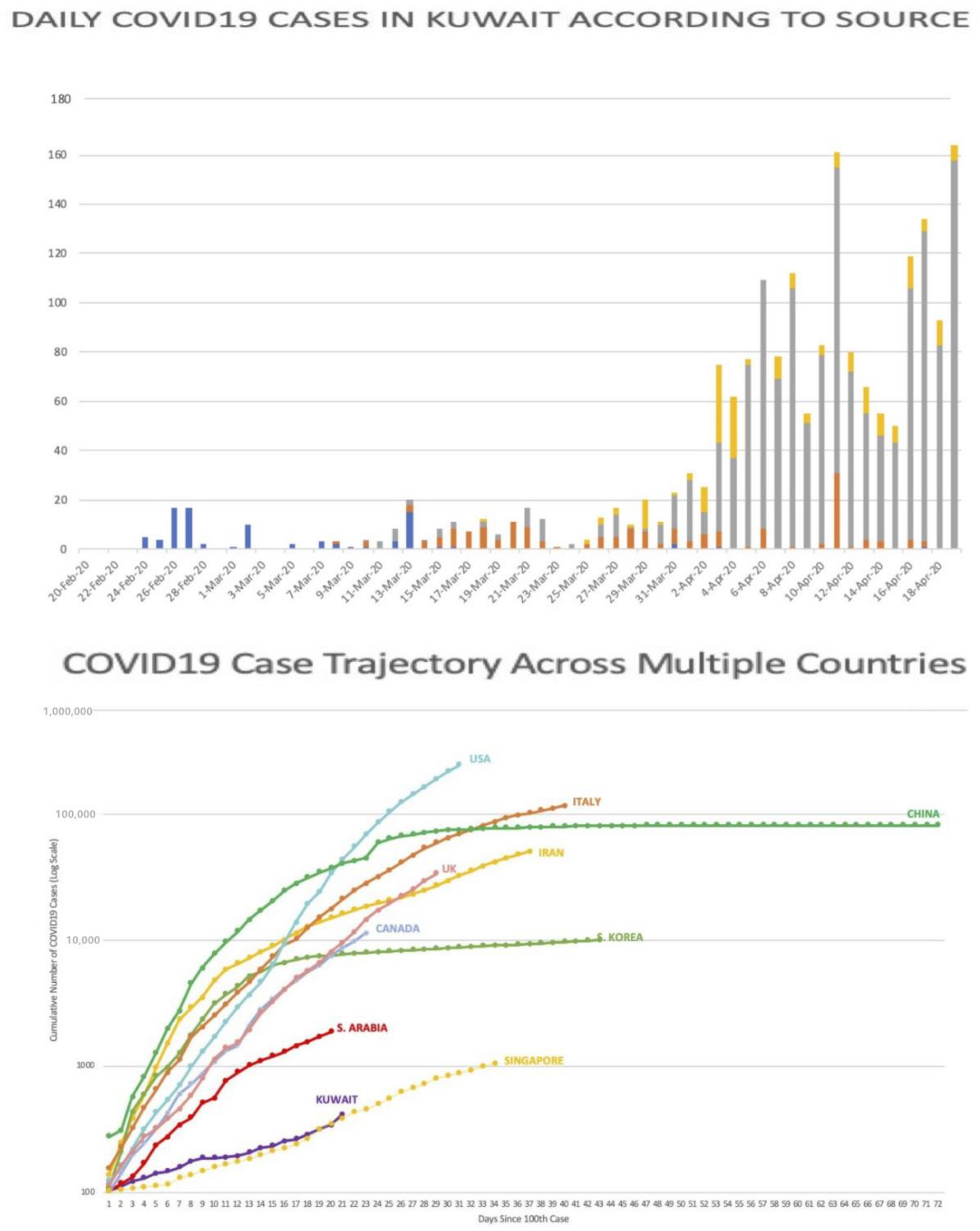