A portable Fourier Transform Spectrometer (B3M-IR) is built and used to measure atmospheric trace gases in the city of Beijing during Olympic Games in 2008. A short description of the instrument is first provided in this paper. A detailed spectral analysis is then presented. The total columns of ozone (O3), carbon monoxide (CO), methane (CH4) and nitrous oxide (N2O) are retrieved from the ground-based solar absorption spectra recorded by the B3M-IR during the Olympic Games. Lacking validation data, only the retrieved total column of O3 is compared with that retrieved by MAX-DOAS, which is deployed at the same station. The mean difference between the two methods of measurement is 6.5%, demonstrating the performance and reliability of B3M-IR. View Full-Text
Keywords: B3M-IR; Trace gases; SFIT2; Remote Sensing; Olympic Games B3M-IR; Trace gases; SFIT2; Remote Sensing; Olympic Games
►▼ Show Figures 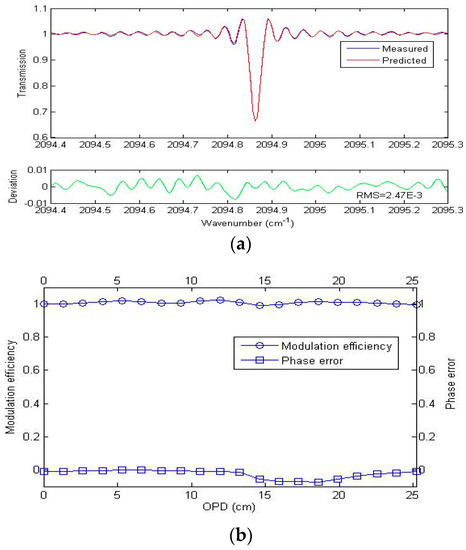 It’s an interesting topic to investigate the trace gases using a new ground based FTIR, the validation is preliminary, but the trend is impressive during such a well-known event. Some minor suggestions:

1.       The author should provide more details about the key part of the research even for a letter.

(1)    The FTIR observations, does it just perform the measurements at 13:30PM under clear-sky condition?  More details should be added.

(2)    How do you combine the four datasets of priori VMR profiles?

(3)    More description about the fundamental theoretical basis about the SFIT2 algorithm. What’s the input and output of SFIT2? You just use the selected micro-window

2.        Just curious about the FTIR equipment, the InSb detector for thermal channels while MCT used for middle infrared bands?


The authors would like to thank the reviewers for their valuable suggestions and constructive comments. We have revised the manuscript accordingly. The authors’ responses have been inserted below in blue text after each of the reviewers’ comments. Reviewer 1: It’s an interesting topic to investigate the trace gases using a new ground based FTIR, the validation is preliminary, but the trend is impressive during such a well-known event. Some minor suggestions: 1. The author should provide more details about the key part of the research even for a letter. (1) The FTIR observations, does it just perform the measurements at 13:30PM under clear-sky condition? More details should be added. Response 1.1) The point is well taken! The data quality is relatively better around 1:30pm, so only the data acquired on this time was used in this study. The reason is provided at the end of Section 2.1. (2) How do you combine the four datasets of priori VMR profiles? Response 1.2) First, the VMR profiles are interpolated to the pressure level of the built-in atmospheric profile of Modtran 4.0, then the VMR profiles are averaged from the interpolated VMR profiles using the data from June to October of each year. (3) More description about the fundamental theoretical basis about the SFIT2 algorithm. What’s the input and output of SFIT2? You just use the selected micro-window Response 1.3) SFIT2 is very popular in retrieving trace gases from ground-based measurements. The input sand outputs of SFIT2 are rather complex. Similar to Modtran 4.0, we need to refer to its manual and prepare an input file to run SFIT2 each time. Here, I just follow the published articles in this field for simplicity. Trace gas retrievals are usually carried out in small microwindows that contain the spectral absorption features of the target gas as well as the absorption features of interferences. Regarding the selection of micro-windows, we can refer to the book “Spectroscopic atlas of atmospheric microwindows in the middle infra-red” that provided in the Reference. In practice, we may adjust the microwindows according to the characteristics of FTS like spectral resolution. (4) More details about the evaluation reference data, namely MAX-DOAS Response 1.4) This instrument was developed by the Anhui Institute of Optics and Fine Mechanic of Chinese Academy of Sciences. We affiliated to different institutes and carried out independent measurements at that time. We did not have too much information on MAX-DOAS and its data quality. I am regret to say I did not make a response to this comment. 2. Just curious about the FTIR equipment, the InSb detector for thermal channels while MCT used for middle infrared bands? Response 1.5) Yes, you are right. The MCT detector is for the longwave domain from 1850 to 750 cm-1, and InSb detector is for the shortwave domain from 4100 to 1850 cm-1. Thank you very much for your valuable comments and suggestions. The revised paper has been significantly improved.

The author describes a new FTS instrument which is used to measure total atmospheric columns of ozone, carbon monoxide, methane and nitrous oxide. Testing of the instrument is performed, and the instrument appears to have potential to provide good quality data. The instrument is deployed in Beijing during the 2008 Summer Olympic Games in that city, taking daily measurements, and the temporal trends in these trace gas columns are presented.

In general, this is a well-constructed simple paper which outlines and evaluates a new instrument which may be of interest to readers of Sci. The field deployment is relatively simple and limited in scope and is best considered as a test of the instrument rather than a major contribution to the understanding of Beijing’s air quality. My only substantial concern are statements using the observations to assess the outcome of a local policy intervention which I do not believe is justified.

Overall I am happy to recommend approval of this publication. I have a few specific and relatively minor comments and revisions which I outline below:

·      The sentence “To data, many satellites have the capability of freely providing the products of the trace gases [2–5]” is badly phrased. I suggest “There exist several satellite products of atmospheric columns of various trace gases [e.g. 2–5]”

·      The geographical coordinates should be given to two or three decimal places.

·      I suggest adding “in situ” in the description of the “traditional chemistry sampling instruments”.

·      I suggest either or both of a) highlighting the position microwindows from table 1 on Figure 2 or including the SNR for the specified microwindows in a column on Table 1.

·      The units of phase error on figure 1b are not specified (degrees, radians?). The y-axis limits for the phase error should be chosen to better display the range of the data.

·      “Above this, the mid-latitude Summer atmosphere is used.” – please specify the source of this atmospheric profile.

·      Table 1 would benefit from horizontal lines separating the gases.

·      Also in table 1 it is unclear if the first and third microwindow for CH4 have no interfering gases or if H2O, O3 and HCl apply for these also. This should be made clear.

·      “If the RMS residual value is very small…” – please include a rough numerical value for what “very small” means in this context.

·      Please include time zone for the times given. 24-hour format would be preferable.

·      The date format for figures 12-15 should be changed, MM/DD/YY is not a good format for an international journal. YYYY-MM-DD is preferable (the author may wish to omit the year as all data is from 2008).

·      The temporal trend in the trace gas concentrations should be quantified – simple trendlines and R2values should be sufficient. Without numerical assessment it is difficult to evaluate the validity of the analysis the author makes.

·      I disagree with the author’s assessment that “The total column amount of CO at the end of July, 2008 is the highest, and then it began to decrease gradually.” Figure 13 appears to show a sharp drop after the first few measurements an then a mostly stable profile after this. The data may be too sparse to make strong conclusions about trend, and are certainly too sparse and the trends too weak to make an evaluation of a specific policy. References to the Beijing traffic control policy should be removed.

·      Article titles are all in lower case after the first letter, which is incorrect in some gases (e.g. “gome” and “no2”)