It has been suggested that core ionization in DNA atoms could induce complex, irreparable damage. Synchrotron soft X-rays have been used to probe the damage induced by such events in thin films of DNA components. In a complementary approach, we investigate the fragmentation dynamics following a carbon or oxygen K-shell ionization in 2-deoxy-D-ribose (DR), a major component in the DNA chain. Core ionization of the sugars hydration layer is also studied. To that aim, we use state-of-the-art ab initio Density Functional Theory-based Molecular Dynamics (MD) simulations. The ultrafast dissociation dynamics of the core ionized molecule, prior Auger decay, is modeled for about 10 fs. We show that the core-ionization of oxygen atoms within DR or its hydration layer may induce proton transfers towards nearby molecules, before Auger decay. In a second step, we model an Auger effect occurring either at the beginning or at the end of the core–hole dynamics. Two electrons are removed from the deepest valence molecular orbitals localized on the initially core-ionized oxygen atom (O*), and this electronic state is propagated by means of Ehrenfest MD. We show an ultrafast dissociation of the DR2+ molecule C-O* bonds, which, in most cases, seems independent of the time at which Auger decay occurs. View Full-Text
Keywords: DNA; ionization; dissociation DNA; ionization; dissociation
►▼ Show Figures 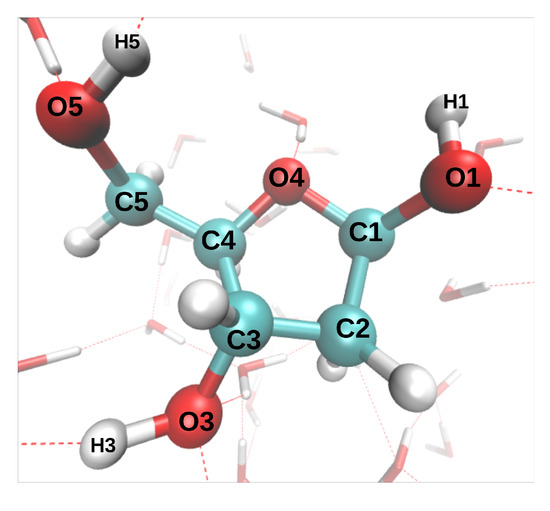