Integration of BIM and Procedural Modeling Tools for Road Design

Safety and Performance of Offshore Platforms Subjected to Repeated Earthquakes

In this work, a systematic study is conducted on the behavior of three-dimensional offshore oil/natural gas platforms under the action of seismic sequences. Such repeated earthquakes result in a noteworthy accumulation of damage in a platform since, in many cases, any rehabilitation process between any two or more successive ground motions cannot be essentially materialized because of lack of time. Conversely, in the past, the seismic response of offshore platforms has been exclusively investigated for the case of single earthquakes. In this study, two three-dimensional platforms are examined, where the first one is assumed to be completely constrained at its base (fixed boundary conditions), while the second one is founded in deformable soil with the aid of long piles. These structures are subjected to real seismic sequences which have been recorded by the same station in a short period of time. Additionally, the platforms under consideration are also subjected to artificial seismic sequences. In this study, we found that sequential earthquakes have a significant effect on the response of these special structures, and this finding should be taken into account in their design. View Full-Text
Keywords: safety and performance of offshore platforms; seismic sequences; dynamic soil–pile–structure interaction safety and performance of offshore platforms; seismic sequences; dynamic soil–pile–structure interaction
►▼ Show Figures 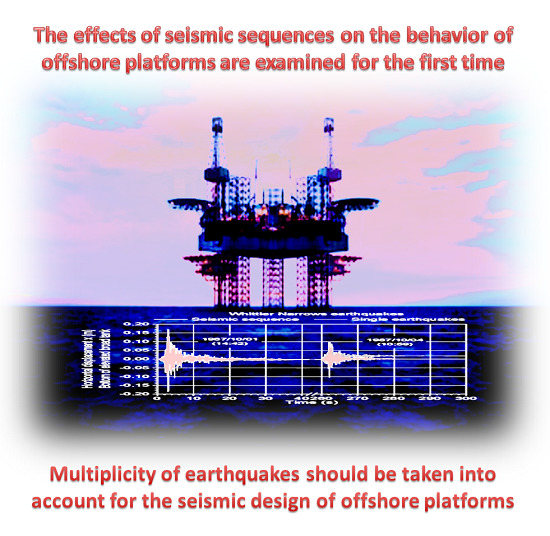