This study examines the relation between maximum seismic displacements and residual displacements for reinforced concrete building structures. In order to achieve a reliable relationship between these critical structural parameters for the seismic performance of concrete buildings, an extensive parametric study is conducted by examining the nonlinear behavior of numerous planar framed structures. In this work, dynamic inelastic analyses are executed to investigate the seismic behavior of two sets of frames. The first group consists of four planar frames which have been designed for seismic and vertical loads according to modern structural codes while the second group also consists of four frames, which have been designed for vertical loads only, in order to examine older structures that have been designed using codes with inadequate seismic provisions. These two sets of buildings are subjected to various earthquakes with different amplitudes in order to develop a large structural response databank. On the basis of this wide-ranging parametric investigation, after an appropriate statistical analysis, simple empirical expressions are proposed for a straightforward and efficient evaluation of maximum seismic displacements of reinforced concrete buildings structures from their permanent deformation. Permanent displacements can be measured in-situ after strong ground motions as a post-earthquake assessment. It can be concluded that the measure of permanent deformation can be efficiently used to estimate the post-seismic performance level of reinforced concrete buildings. View Full-Text
Keywords: structural safety; post-seismic performance of reinforced concrete structures; residual deformation; maximum deformation structural safety; post-seismic performance of reinforced concrete structures; residual deformation; maximum deformation
►▼ Show Figures 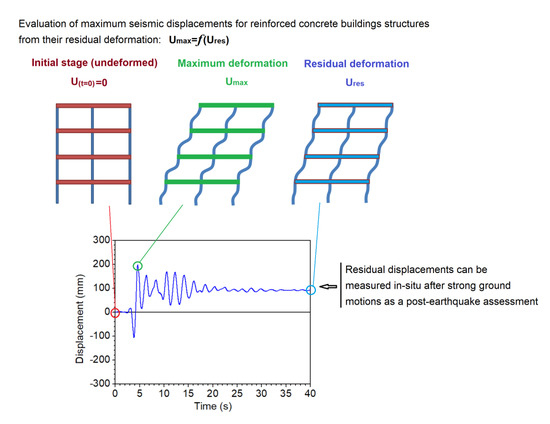