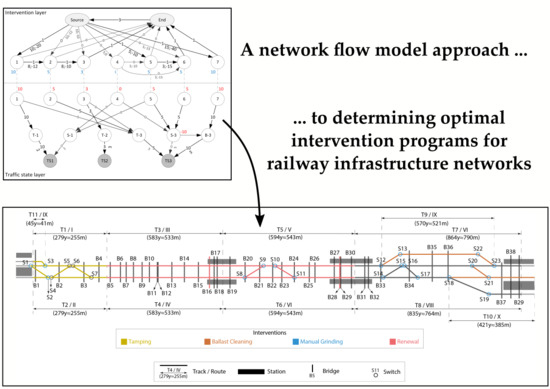 The optimal intervention program is the one that yields the maximum net benefit measured as the difference between the reduction in the risks and the intervention costs for both the owner and the users of the network (Equation (1)), and fulfils all constraints, e.g., budget and externally mandated interventions. where
Owner costs are estimated as the sum of fixed and variable costs (Equation (2)), where it is assumed that the magnitude of the fixed costs per intervention are dependent on the number, and type, of interventions executed together, i.e., in groups. where
The user costs are estimated as the sum of service disruption costs that are associated with the traffic states, i.e., combination of open and closed routes during a specific time of the week, required during the execution of the interventions in intervention program IP (Equation (3)). where

In the proposed model the network is composed of lines, which consist of all infrastructure objects between two stations (Figure 1). Each line is divided into routes, which are further divided into sections by the location of switches. Trains are able to change routes at switch location. Infrastructure objects are assigned to the route(s) where they enable the flow of traffic.

Four of the five types of dependencies, as identified in literature [8,21], are considered in the model (Table 2). Stochastic dependencies that exist when probabilities of object failures are correlated, e.g., due to common cause failures, are not considered. This paper considers risk on the object level. Stochastic dependencies, however, would require the risk estimation on the network level, which increases the combinatorial complexity significantly [22]. The economical, technical and topological dependencies are depicted in Figure 2.

This section contains the mathematical formulation of the constrained network flow model to determine the optimal intervention programs on railway infrastructure networks.

The objective function is the maximisation of the sum product of the flow on each edge and the net benefit on each edge if an intervention was executed (Equation (4)). where

The flow conservation constraints, which are used to ensure that the interventions and their associated traffic configuration are appropriately represented, are given in Equations (5) and (6), for the nodes in the intervention layer and traffic state layer. where

The traffic state source constraints, which are used to ensure that times allocated for the intervention-traffic state combinations (i.e., represented by the edges in the traffic-state layer), adequately consider that some interventions can be executed simultaneously with others, are shown in Equation (7). where

The exclusivity constraint (Equation (9)) ensures that only one intervention per object is selected. where

The budget constraint (Equation (10)) ensures that the cost of the interventions does not exceed the budget. where

The approach presented in the paper is used to determine the optimal intervention program for an example network modelled after a 2200 m long line, which belongs to the Irish railway network that is located in Dublin, Ireland. All objects that were considered, their initial state, and the topological layout of the routes are shown in Figure 4. It consists of 5163 m of track divided into 11 objects, 23 switches, and 39 bridges with a total of 16,763 m2 of bridge deck. A list with all objects, their extent, current state, affected route, and the risk that is related to each state is given in Appendix A (Table A1 and Table A2). The risk related to an object being in a certain state was estimated using the risk assessment process presented in [32]. Infrastructure managers from Irish Rail have provided all cost and duration values used. The optimal intervention programs are determined for the situation where there is no budget limit and for the situation where there is a budget limitation of four million euros.
All interventions considered are listed in Table 6. Interventions of three different types can be executed on each object. The sharable portions of the costs for track and switch interventions, i.e., the economical dependencies, are 20% and 40%. To take advantage of these savings the objects have to be close to each other. For track, this means they are physically connected, e.g., T1—T3—T5—T7 and T2—T4—T6—T8. For switches, there are four groups S1 to S7, S8 to S11, S12 to S17, and S18 to S23.
The traffic states considered, with their unit cost per hour are listed in Table 7. Each traffic state refers to a specific combination of a time window (e.g., day, weekend, and night) and the closed routes. For example, traffic state 1 refers to the closure of route I during weekdays, which leads to user costs of 18,620 euros per hour. Weekend and night windows are limited to 52 and 4 h of maximum work time, during which interventions can be executed. Interventions with a longer duration than the maximum work time of a time window cannot be executed during this time window and have to be executed during another time window. Track interventions are an exception to this rule, as they can be stopped anywhere and then resumed in the next time window at the same place.
This example has 3 × 1082 possible intervention programs, from which the optimal one is to be found. The model of the constrained network flow model consists of 986 nodes and 2015 edges, 2549 decision variables, 944 flow conservation constraints, and 735 side constraints. The constrained network flow model was programmed while using the software R [33].

An approach to develop models to determine optimal intervention programs for railway infrastructure networks was presented, i.e., the one with the maximal difference between the benefit in terms of risk reduction and the costs to the owner and user of executing interventions. The developed models are network flow models formulated as mixed integer linear programs and are constructed as constrained minimum cost flow problems, which search for the flow with the minimum cost within a given network under the consideration of flow conservation in each node, budget constraint and constraints that ensure that the times required to execute multiple intervention simultaneously are correctly considered. It enables the consideration of
The approach was used to develop a model to determine the optimal intervention program for a network with 73 objects, i.e., 11 tracks, 23 switches, and 39 bridges. The optimal intervention program was determined for the situations with and without a budget limitation.
It was shown that the developed model was able to determine the optimal intervention program in much faster computational time than using an exhaustive search, even with a reduced search space. It was also shown that the developed model was slower, but more accurate than a more simplified approach that is based on straightforward decision rules. The significance of the trade-off between speed and accuracy depends on the accuracy of the underlying models of infrastructure and the possible interventions, as well as the amount of time available for analysis.

The work presented in this paper has received funding from the European’s Union Horizon 2020 research and innovation program under the Grant Agreement No. 636285 (DESTination RAIL project).

Table A1 and Table A2 show all objects within the example area including their extent, state, affected routes, and the risk of the object related to each possible state. Since the track segmentation is derived from the routes, they are always related to the route with the same number. Switches are always related to the routes they are located in, while bridges are related to all routes that are carried by the bridge. The risk estimation is derived from [34] where the risk assessment process of [32] is used.
Table A1. Track and switch objects.
Table A1. Track and switch objects.
Table A2. Bridge objects (part 1).
Table A2. Bridge objects (part 1).
1 The letter in bracket represents the bridge type as masonry (M), concrete (C), and steel (S). 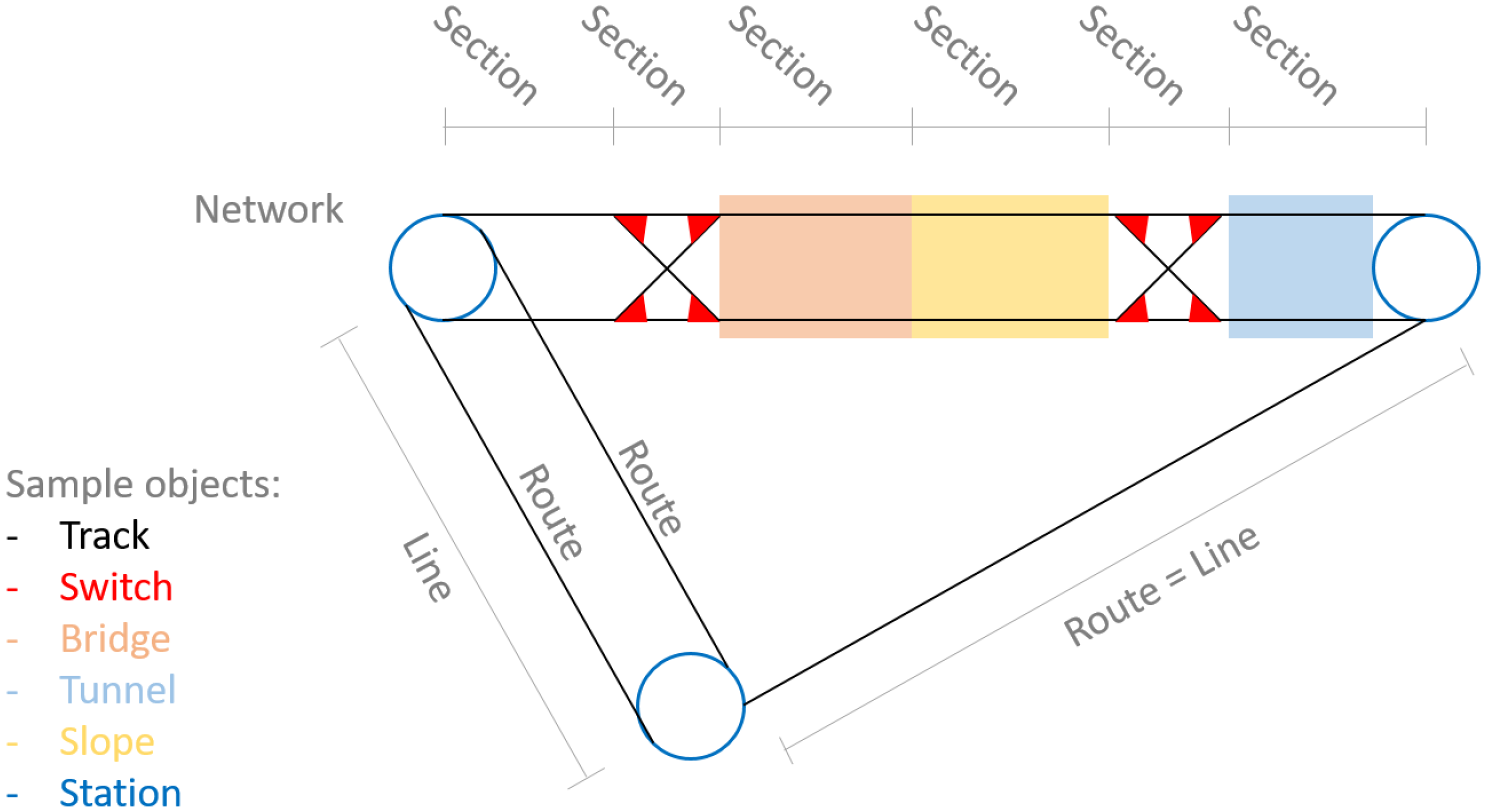