Apparent Motion Perception in the Praying Mantis: Psychophysics and Modelling

Computer monitors, smart phone screens, and other forms of digital displays present a series of still images (frames) in which objects are displaced in small steps, tricking us into perceiving smooth motion. This illusion is referred to as “apparent motion”. For motion to be perceived, the magnitude of each displacement step must be smaller than a certain limit, referred to as Dmax . Previous studies have investigated the relationship between this limit and object size in humans and found that the maximum displacement is larger for larger objects than for smaller ones. In this work, we investigated the same relationship in the praying mantis Sphodromantis lineola by presenting them with moving random chequerboard patterns on a computer monitor. Even though motion perception in humans and insects are believed to be explained equally well by the same underlying model, we found that Dmax scales differently with object size in mantids. These results suggest that there may be qualitative differences in how mantids perceive apparent motion compared to humans.

Apparent motion is the perception of motion created by rapidly presenting still frames in which objects are displaced in space. Observers can reliably discriminate the direction of apparent motion when inter-frame object displacement is below a certain limit, . Earlier studies of motion perception in humans found that is lower-bounded at around 15 arcmin, and thereafter scales with the size of the spatial elements in the images. Here, we run corresponding experiments in the praying mantis Sphodromantis lineola to investigate how scales with the element size. We use random moving chequerboard patterns of varying element and displacement step sizes to elicit the optomotor response, a postural stabilization mechanism that causes mantids to lean in the direction of large-field motion. Subsequently, we calculate as the displacement step size corresponding to a 50% probability of detecting an optomotor response in the same direction as the stimulus. Our main findings are that the mantis scales roughly as a square-root of element size and that, in contrast to humans, it is not lower-bounded. We present two models to explain these observations: a simple high-level model based on motion energy in the Fourier domain and a more-detailed one based on the Reichardt Detector. The models present complementary intuitive and physiologically-realistic accounts of how scales with the element size in insects. We conclude that insect motion perception is limited by only a single stage of spatial filtering, reflecting the optics of the compound eye. In contrast, human motion perception reflects a second stage of spatial filtering, at coarser scales than imposed by human optics, likely corresponding to the magnocellular pathway. After this spatial filtering, mantis and human motion perception and Dmax are qualitatively very similar. View Full-Text
Keywords: apparent motion; insect vision; Hassenstein-Reichardt detector; Dmax apparent motion; insect vision; Hassenstein-Reichardt detector; Dmax
►▼ Show Figures 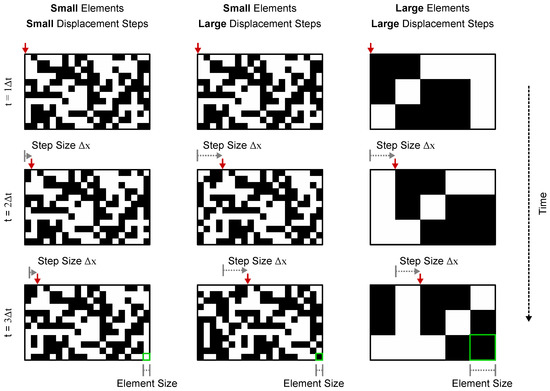