Recently, the use of pre-workout supplements has become popular. Research has shown their ability to increase performance for single bouts but little exists showing their ability to maintain this increase in performance over multiple bouts. Purpose: To investigate the effects of supplements on power production and the maintenance of upper and lower body tasks. Methods: Twenty-three males (22.9 ± 3.6 years, 175.6 ± 6.5 cm, 86.9 ± 15.1 kg, 19.1 ± 8.4 BF% mean ± standard deviation (SD)) were familiarized with the testing protocols and maximal bench press performances were attained (109.1 ± 34.0 kg). Utilizing a double-blind crossover design, subjects completed three trials of five countermovement vertical jumps before and after a high-intensity cycle sprint protocol, which consisted of ten maximal 5 s cycle ergometer sprints utilizing 7.5% of the subject’s body weight as resistance, with 55 s of recovery between each sprint. Subjects ingested in a randomized order a commercially available pre-workout supplement (SUP), placebo + 300 mg caffeine (CAF), or a placebo (PLA). Peak power (PP), mean power (MP), and minimum power (MNP) were recorded for each sprint. Subjects performed a velocity bench press test utilizing 80% of their predetermined one repetition maximum (1RM) for 10 sets of 3 repetitions for maximal speed, with one-minute rests between sets. Maximal velocity from each set was recorded. For analysis, bike sprint and bench press data were normalized to the placebo trial. Results: Cycle sprint testing showed no significant differences through the testing sessions. In the bench press, the peak velocity was higher with both the SUP and CAF treatments compared to the placebo group (1.09 ± 0.17 SUP, 1.10 ± 0.16 CAF, and 1 ± 0 PLA, p < 0.05) and the supplement group was higher than the PLA for mean velocity (1.11 ± 0.18 SUP and 1 ± 0 PLA, p < 0.05). Vertical jump performance and lactate levels were not significantly different (RMANOVA showed no significant differences from any treatments). Conclusions: Supplementation with a pre-workout supplement or placebo with caffeine showed positive benefits in performance in bench press velocity. View Full-Text
Keywords: pre-workout; power production; anaerobic; bench press pre-workout; power production; anaerobic; bench press
►▼ Show Figures 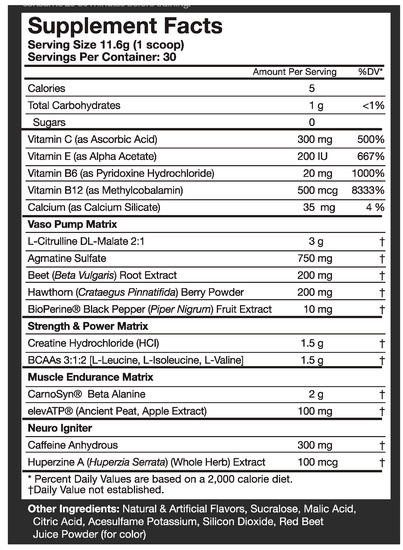