In this work, pool boiling heat transfer tests were conducted for investigating the effects of the size and pitch of the hydrophobic square patterns on a copper test piece with the following dimensions: 40 mm long, 25 mm outer diameter, and 18 mm inner diameter. The size of the square patterns and the pitch were varied with an increment of 0.5 mm from 1 mm to 3 mm and from 4.5 to 5.5 mm, respectively. Among the various square patterns of different size and pitch, the 2 mm size square pattern with 5 mm pitch (inter-distance 3 mm) was found to be the best because it gives the advantage of bubble coalescence behavior and also the rewetting phenomenon. The observed bubble departure diameter was 2.35 mm, and using this diameter, we predicted the maximum inter-distance between the patterns for producing inter coalescence of bubbles in the axial direction was 3.12 mm. Therefore, a side-by-side distance of 3 mm, which was closed to the estimated inter-distance graphically, can avoid the earlier inter coalescence of the bubbles between patterns on the surface in the axial direction. This results in better pool boiling heat transfer performance. Highlights: (1) Heterogeneous wettable structures were obtained on the copper surface using screen printing techniques; (2) The effect of the size and pitch of the hydrophobic patterns on the bubble dynamics was determined; (3) The wall superheats of all the heterogeneous wettable surfaces were less than the plain copper surface; (4) The highest heat transfer coefficient was obtained from the hydrophobic pattern with 2 mm size and 5 mm pitch.
Keywords: pool boiling; heterogeneous wettable surface; screen printing; boiling heat transfer coefficient; bubble dynamics pool boiling; heterogeneous wettable surface; screen printing; boiling heat transfer coefficient; bubble dynamics

Phase change heat transfer systems, such as pool and flow boiling heat sinks, are used extensively in the fields of refrigeration, air conditioning, and electronic devices cooling [1,2,3]. During the boiling heat transfer, the working fluid can absorb a large amount of heat with a small wall superheat due to its large latent heat of vaporization [4,5]. The effectiveness of the boiling heat transfer is mostly determined by the limiting parameters like critical heat flux (CHF) and the onset of nucleate boiling (ONB). The higher CHF and the earlier ONB are desirable for better performance. Extensive research works have been carried out for improving boiling heat transfer performance, and they are generally classified into active, passive, and compound techniques [6]. The passive heat transfer enhancement techniques are usually used for improving the boiling heat transfer performance, because by using this technique, better heat transfer performance can be achieved without any external power supply. Usually, many passive techniques are used to improve the pool boiling heat transfer performance, such as increasing the degree of subcooling, improving the fluid’s physical properties by adding nanoparticles, surface modification, and surface coating [7,8,9,10].
Surface wettability has an important role in the enhancement of the pool boiling performance, due to its dependence on the bubble departure frequency. Based on the relationship between the bubble departure phenomenon and free convection, the bubble departure frequency is () calculated using the Equation (1), which is inversely proportional to the duration of bubble growth () and the time interval between the departure of a bubble and appearance of the next bubble () [11].
The bubble growth time will increase with the increase in departure diameter. A smaller diameter leads to better pool boiling performance due to the high departure frequency [11]. In 1935, Fritz proposed a correlation for the departure diameter by considering the wettability effect, which is shown in Equation (2) [12]. where is the departure diameter, is the receding contact angle, is the surface tension, is the acceleration due to gravity, and and are the liquid and vapor density, respectively.
The large contact angle of the hydrophobic surface gives a higher departure diameter, resulting in more bubble growth time. However, some part of the departing bubble remains on the surface for the continuous generation of bubbles without any waiting time [13]. The continuous generation of the bubbles on the hydrophobic surface stops the rewetting of liquid, causing deterioration of boiling heat transfer. This results in the early dry out of the surface, therefore, the use of biphilic surfaces with mixed wettability gives the ideal performance at all regimes of boiling. This is due to the early ONB facilitated by the hydrophobic dots, reduction in the size of the generated bubbles, and prevention of the earlier vapor dry out [14].
Various techniques are available for producing the heterogeneous wettable (biphilic) surface, such as the laser jet printing, photolithography, and screen printing [13,14,15,16]. Among them, the screen printing technique is the best one, as this technique offers a number of advantages compared to the others, namely, scalability of the process, cost-effectiveness with regard to equipment costs and energy needs, and ease of operation (either on a flat or a curved surface).
Only a few works have investigated the effect of size and pitch of patterns on pool boiling heat transfer performance on the cylindrical surface. In this study, the screen printing technique was used to produce the heterogeneous wettable surface. Five different size square patterns with the constant pitch of 5 mm and three different pitch square patterns with the constant size of 2 mm were prepared by printing the hydrophobic polymer composite on the plain copper surface. Subsequently, the pool boiling performances of the prepared heterogeneous wettable surfaces were compared with the plain copper surface.

2.1.2. Preparation of the Polymer Mixture for Screen Printing

In this work, we used polymethyl methacrylate (PMMA) resin as the paint, epoxy as the hardener, and Trichloro (1H, 1H, 2H, 2H-perfluorooctyl) silane as the hydrophobic agent. The hydrophobic polymer mixture for printing was prepared by mixing 4 g of PMMA with 1 g of epoxy for 2 min and then adding 1 mL of Trichloro (1H, 1H, 2H, 2H-perfluorooctyl) silane to the mixture and again mixing it for 2 min.

2.1.3. Preparation of the Heterogeneous Wettable Surfaces with Various Sized and Pitched Square Patterns

The constructional details and important components of the test section are shown in Figure 1a. The pool boiling chamber was made with four glass side plates, one bottom glass plate, and one top polycarbonate plate. The dimension of the chamber was fixed as . The copper test piece was fixed into the holes on the sidewalls by using two glass tubes as represented in Figure 1a. A cartridge heater of 550 W capacity was placed in the hollow test piece using the thermal paste. Eight T-type thermocouples were placed in the equally spaced 1 mm diameter holes, with alternate depths of 5 mm and 15 mm circumferentially. A Reflux condenser, an auxiliary heater, and two T-type thermocouples for measuring the bulk fluid temperature were fixed into the holes provided on the top cover by using the silicon corks [15].

Figure 3 shows the annotated photograph of the experimental setup, and the important components are the tested section, DC power supply, auto transformer, chiller unit (Model: B402L; CCTCL, Taipei, Taiwan), high speed camera (Model: HSP 130; Whited Co., Taipei, Taiwan), data logger, and computer. All pool boiling heat transfer experiments were conducted at the saturated temperature and atmospheric pressure, using DI water as the working fluid. The chiller unit was used to condense the water vapor in the reflux condenser. The input power to the cartridge and auxiliary heaters were controlled by using the DC power supply (Model: GPR-20H50D; Gwinstek, Taipei, Taiwan) and autotransformer, respectively. The MX-100 data logger (Yokogawa, Taipei, Taiwan) was used for acquiring the temperature by connecting it with all thermocouples, and a high speed camera (Model: HSP 130) was used to study the bubble dynamics [15].

For obtaining the accurate, saturated pool boiling data, prior to the experiment, dissolved gas from the working fluid (DI water) was removed by vigorous boiling. After that, the reflux condenser was connected to the chiller unit which was maintained at 5 °C. The bulk temperature of the working fluid was maintained at a saturated condition using an auxiliary heater. Then, the experiment was started at an initial current of 0.1 A and we waited for 2 min to attain the steady state condition. Then, the temperature data from the thermocouples and bubble dynamics were recorded by using the data logger and the high speed camera, respectively. After that, the input current to the cartridge heater was increased with an increment of 0.3 A (during which time the voltage was found to increase), and the entire measurement procedure was repeated. The pool boiling experiment was conducted up to the maximum input current of 4 A [15]. 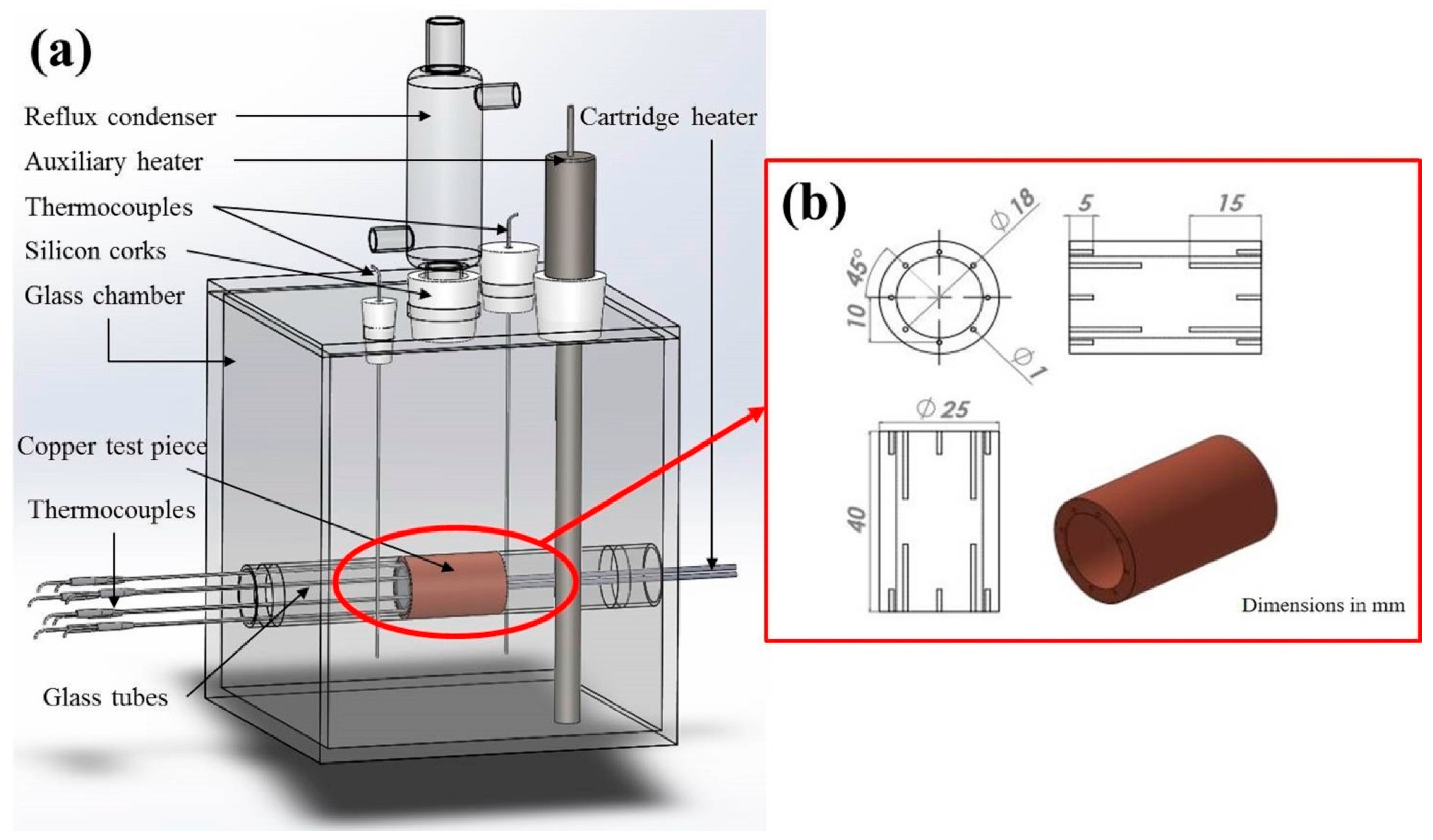 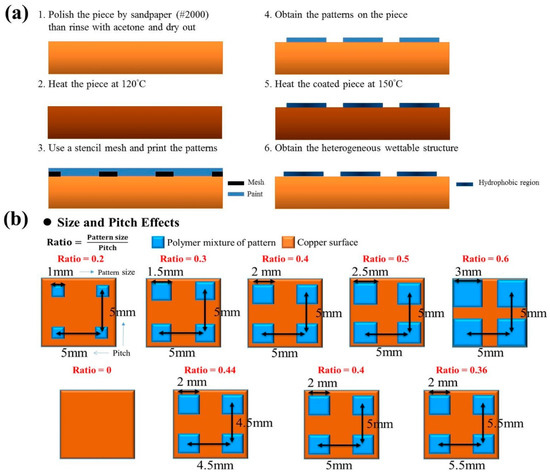 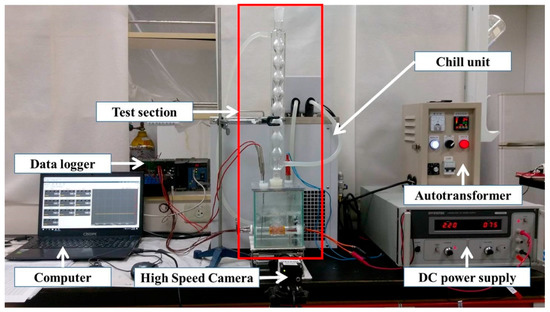 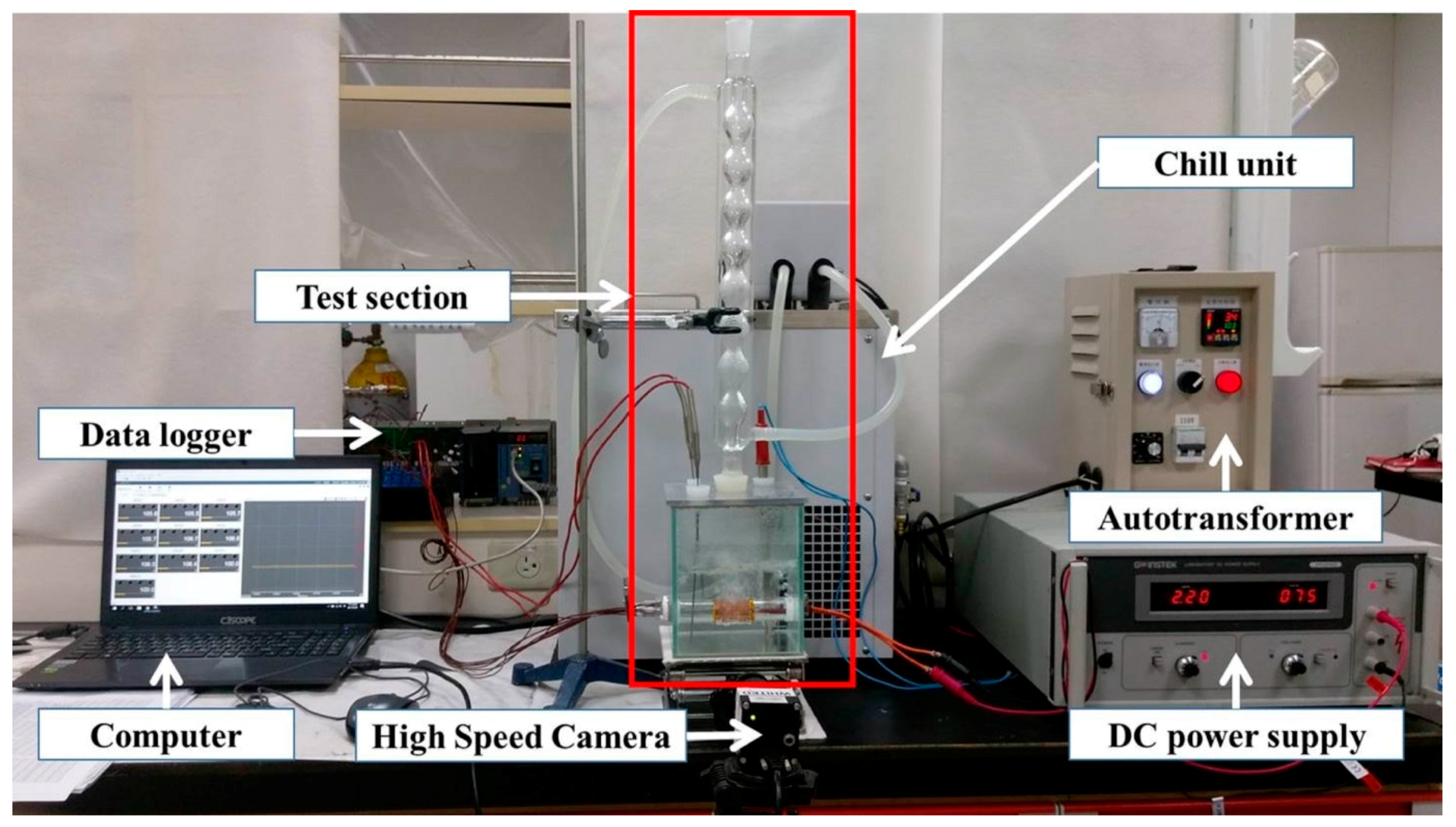 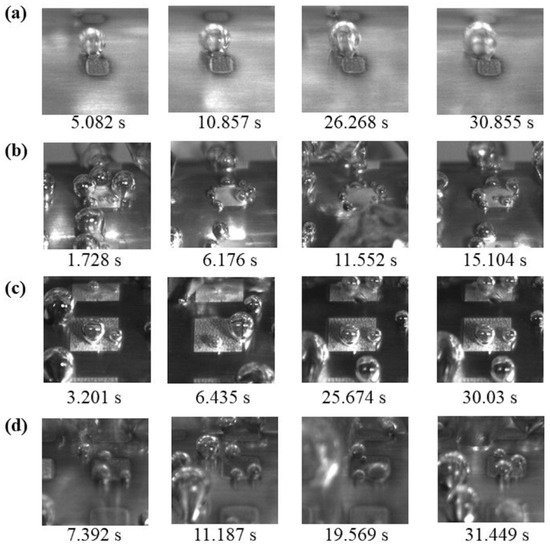 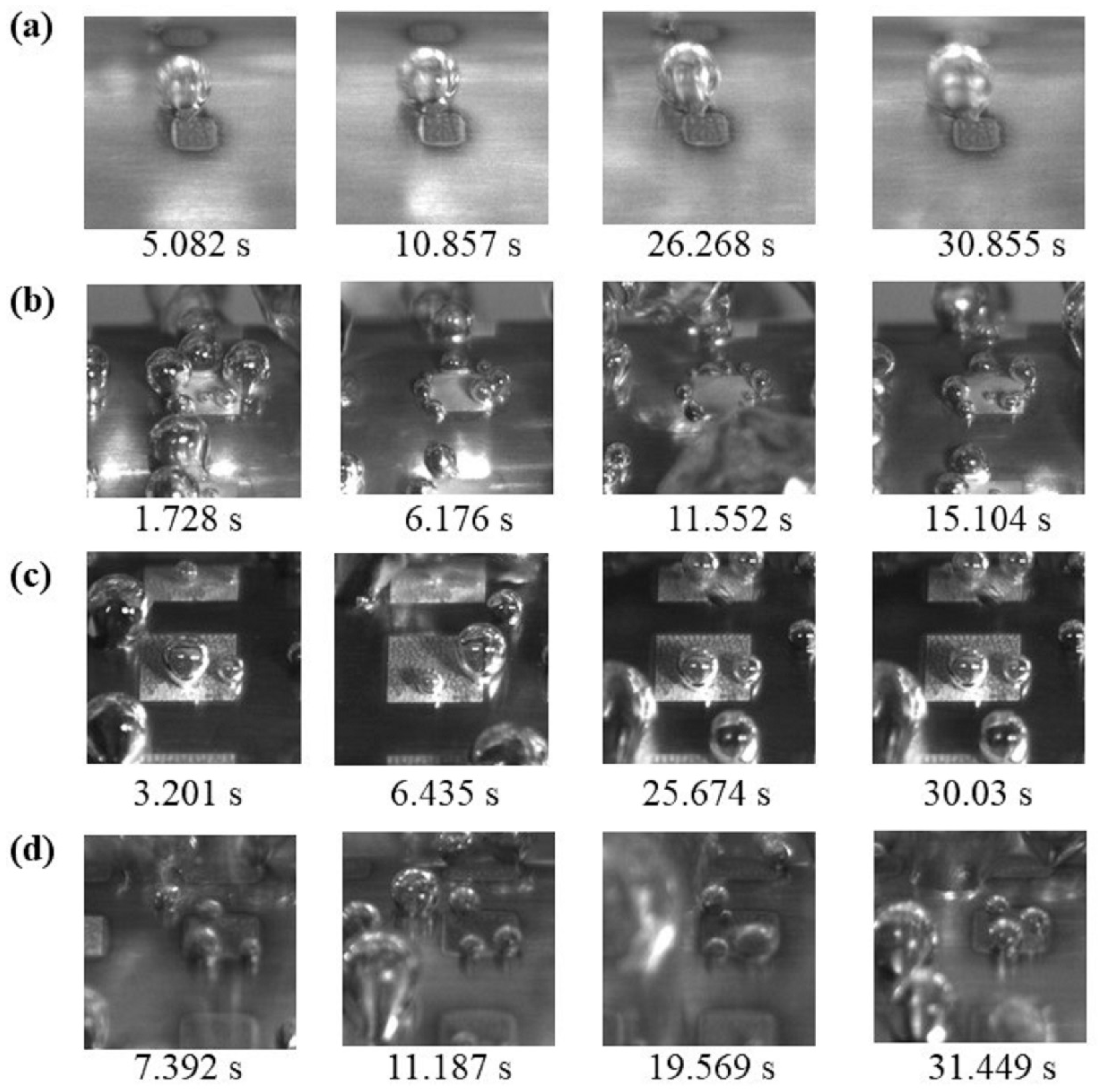 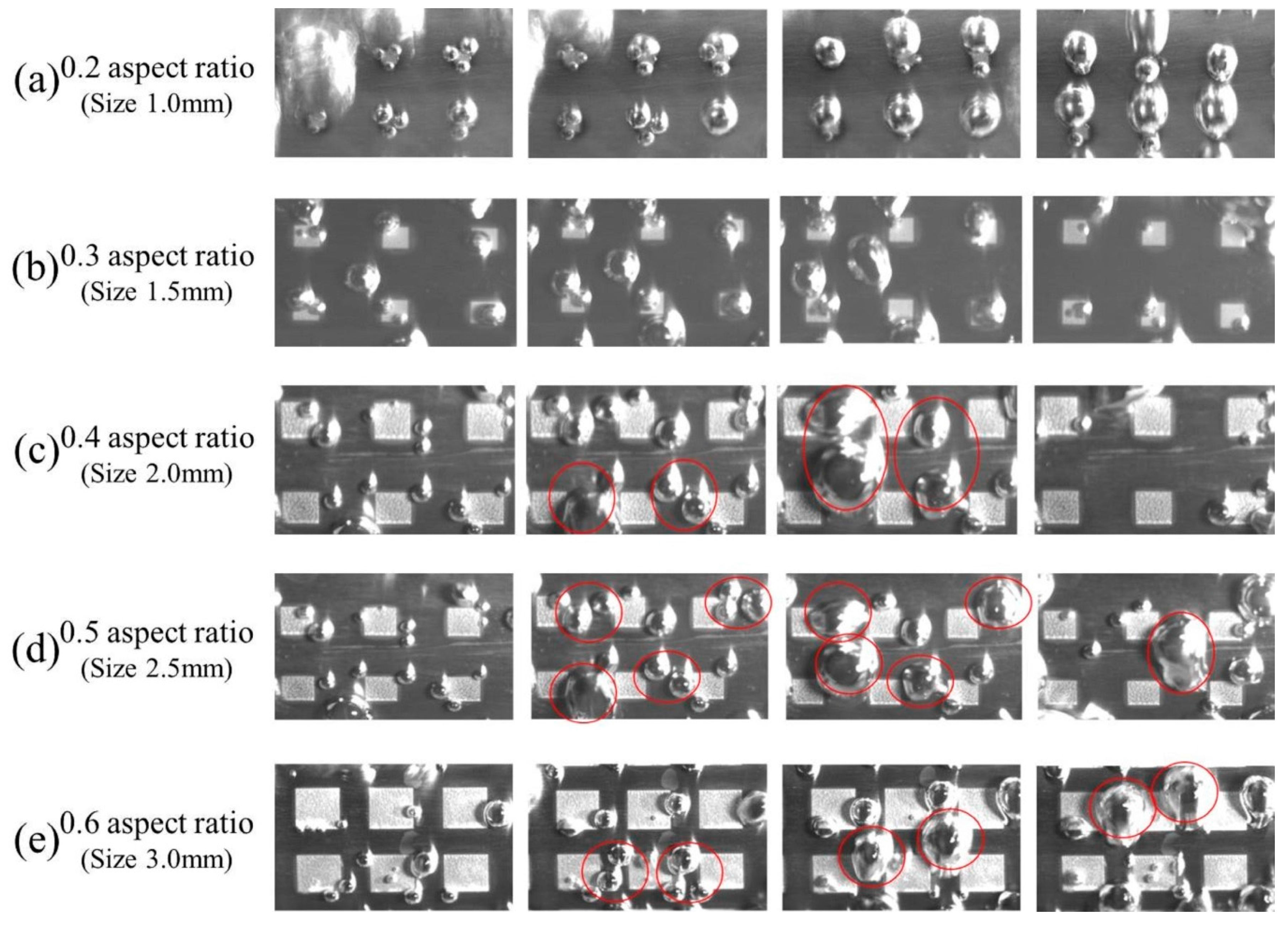 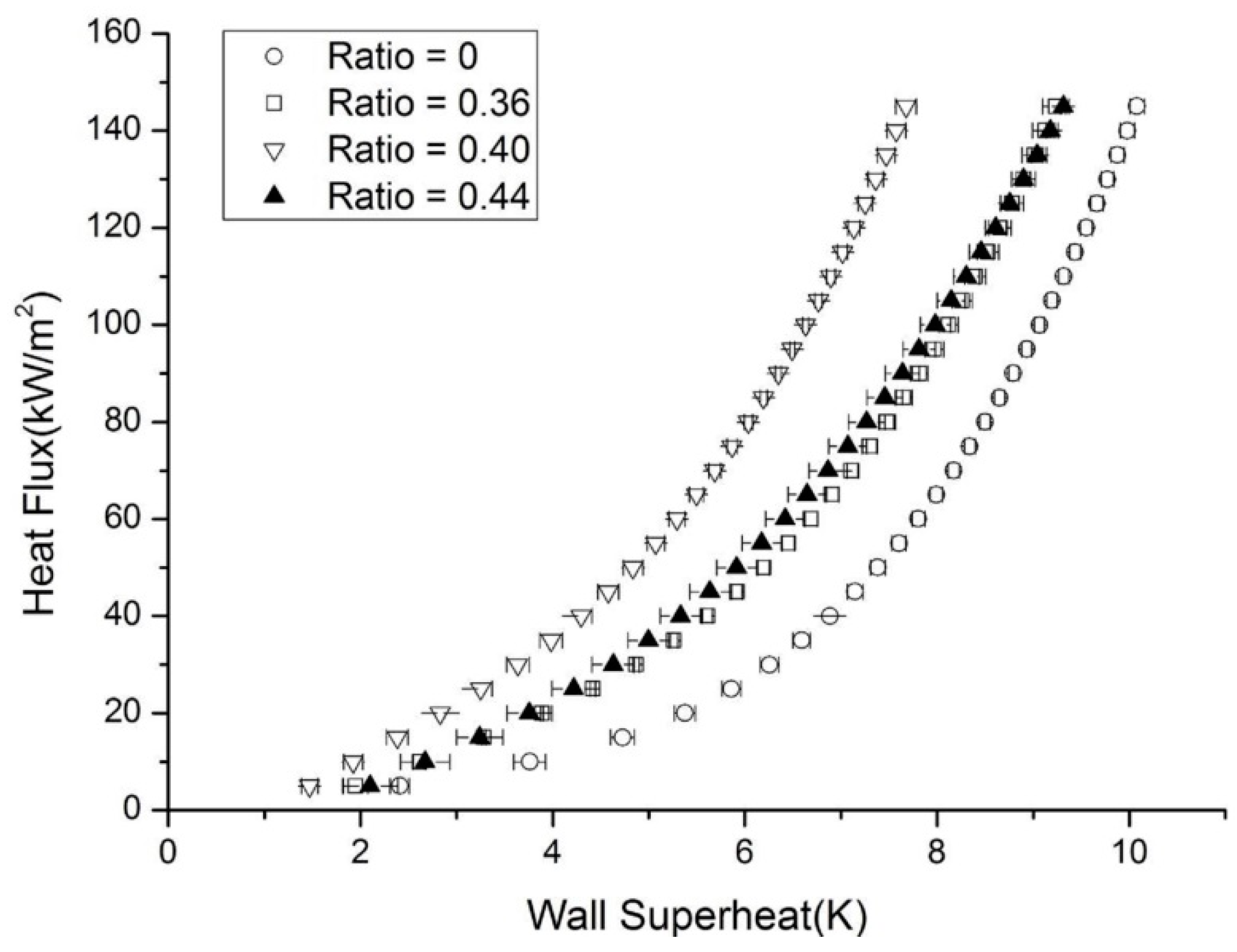 Table 2. Sample information.
Table 2. Sample information.
© 2018 by the authors. Licensee MDPI, Basel, Switzerland. This article is an open access article distributed under the terms and conditions of the Creative Commons Attribution (CC BY) license (http://creativecommons.org/licenses/by/4.0/).
We use cookies on our website to ensure you get the best experience. Read more about our cookies here.
Accept
We have just recently launched a new version of our website. Help us to further improve by taking part in this short 5 minute survey here. here.
Never show this again