We present here an innovative photon detector based on the proximity junction array device (PAD) working at long wavelengths. We show that the vortex dynamics in PAD undergoes a transition from a Mott insulator to a vortex metal state by application of an external magnetic field. The PAD also evidences a Josephson I-V characteristic with the external field dependent tunneling current. At high applied currents, we observe a dissipative regime in which the vortex dynamics is dominated by the quasi-particle contribution from the normal metal. The PAD has a relatively high photo-response even at frequencies below the expected characteristic frequency while, its superconducting properties such as the order parameter and the Josephson characteristic frequency can be modulated via external fields to widen the detection band. This device represents a promising and reliable candidate for new high-sensitivity long-wavelength detectors.
Keywords: niobium; proximity effects; superconductivity; detectors; terahertz; Vortex dynamics niobium; proximity effects; superconductivity; detectors; terahertz; Vortex dynamics

Long-wavelength radiation has recently become one of the most significant regions of the electromagnetic spectrum in terms of multi-disciplinary use not only in basic science research, but also in different technologies [1,2,3]. This wavelength range = 250–2500 m (energy range 0.5–4 meV) allows the investigation of many fundamental physical phenomena, e.g., phonon and plasmon dynamics, elementary particle physics and probably in the near future even the cold dark matter [4,5,6,7,8,9]. Furthermore, with its high transmission through a wide range of non-conducting materials, long-wavelength radiation and in particular terahertz (THz) radiation holds a significant potential in many applications such as non-destructive imaging, security screening and material characterizations. However, in comparison with adjacent energy ranges, e.g., IR and UV, in this wavelength domain the instrumentation and in particular the detectors are still limited, expensive or difficult to use. For instance semiconducting bolometers are widely used as cryogenic and non-cryogenic THz detectors [10], but their sensitivity to temperature and mechanical fluctuations and their limitations in the high frequency band operation, renders its use mainly confined to laboratories. Recent studies have shown that also superconducting devices can be employed for long wavelengths and in particular for THz generation and detection [11,12,13,14]. These devices exhibit extreme low noise compared to their semiconducting counterparts, while having response time orders of magnitude lower and a higher frequency range of operation. However, the frequency range of the operation is set by the superconducting gap of the material (usually in the range 300 GHz to 1 THz in conventional superconductors and up to 30 THz in cuprates). Furthermore, there are studies showing the possibility to control semiconducting and superconducting properties in materials with physico-chemical treatments [15,16] and systems with low dimensionality [17,18,19,20]. Meanwhile, in recent years several distinctive mechanisms are being explored as new detection methods in this energy domain such as tunnel junctions, high gap superconducting junctions, transition edge sensors, bi-crystal junctions, etc. [21,22,23].
In this work we present and characterize a novel device based on the superconducting proximity junction array that can be used for detection of photons at long wavelengths. The superconducting characteristics of this device based on non-localized vortex dynamics will be discussed. The effect of the quasi-particle currents and the subsequent limitations of this detector will be also reviewed. The response of the device in the radio-frequency domain well below the expected characteristic frequency of the proximity junctions will be presented and further advancements based on non-equilibrium phenomena due to the external perturbations will be discussed. The proposed device represents a step forward toward the design of a robust, low-noise, broadband, high-sensitivity, and long-wavelength radiation detector operating in a wide energy range covering the THz domain.

The device we designed and realized consists of an array of about 90000 Nb superconducting islands regularly deposited on a non-superconducting substrate of m in size and with a period of ∼270 nm, with an island diameter of ∼220 nm and a thickness of 45 nm (see Figure 1). Standard photo-lithographic tools have been employed to obtain a 40 nm thick Au template on the non-superconducting Si/SiO substrate ( cm). The template consists of a central square of m, with the corners connected to four terminals used for electric measurements. The size of these terminals is m, large enough for micro bonding. The Nb pattern is then created on top of the central Au square employing electron beam lithography and DC sputtering. To ensure a uniform current injection inside the array, two 45 nm Nb bus bars were deposited along two opposite sides of the array. The IV measurements were carried out in a shielded cryostat at 4.2 K. A current bias was applied using the signal generator at 107 Hz. Two measurements mode were used. In one the I-V curves were measured amplifying the output voltage via a low-noise amplifier and digitized by the National instruments sampling card (USB-6363). In the second mode, the voltage sinusoidal waveform was measured via a lock-in amplifier locked to the applied current signal, resulting in the direct measurement of the dynamic resistance. The magnetic field was applied by placing a solenoid around the sample with the field perpendicular to the plane of the device. The current through the solenoid increased in a step-wise fashion and separate I-V traces were recorded at each field step.
For the radio-frequency response of the device, a custom-made diamagnetic dipole antenna with length L = , centered at 8 GHz was inserted inside the cryostat in front of the magnetic coils and the device. The highest transmission line (resonant frequency) using a vector analyzer connected to the antenna was found at f = 7.78 GHz at which the measurements were done. The response measurements were carried out via a continuous measurement of the electrical response of the device with and without the radio-frequency (RF) signal.

In this report, we present a proximity junction arrays device (PAD), as a novel long-wavelength radiation detector. We characterized the vortex dynamics of this proximity array device (PAD) vs. external parameters, e.g., magnetic and electric field, showing the occurrence of the transition from a Mott insulating to a metallic state. We also demonstrated that the application of the magnetic field can modulate and significantly enhance the superconducting order parameter. The device shows a shunted collective Josephson characteristics with the characteristic frequency of GHz. The application of the magnetic field also introduces a superimposition of the screening current to the tunneling current, which determines its reduction. The response of the device was experimentally measured at the frequency of GHz immersed in liquid He at the temperature of T = 4.2 K. As a detector, this device shows a relatively high voltage sensitivity of 7000 VW, in absence of magnetic field modulations. Our results suggest that photo-response and voltage sensitivity of the proximity junctions array, can be additionally enhanced via external parameters, i.e., geometry and magnetic field at specific operation bias.

This project was financially supported by project TERA, an internal call of group Vth of INFN at LNF.

S.J.R. would like to thank Antonio Grilli and Agostino Raco for their valuable technical support. We acknowledge the financial support of the Bilateral Cooperation Agreement between Italy and Japan of the Italian Ministry of Foreign Affairs and of the International Cooperation (MAECI) in the framework of the project of major relevance N. PGR0072. 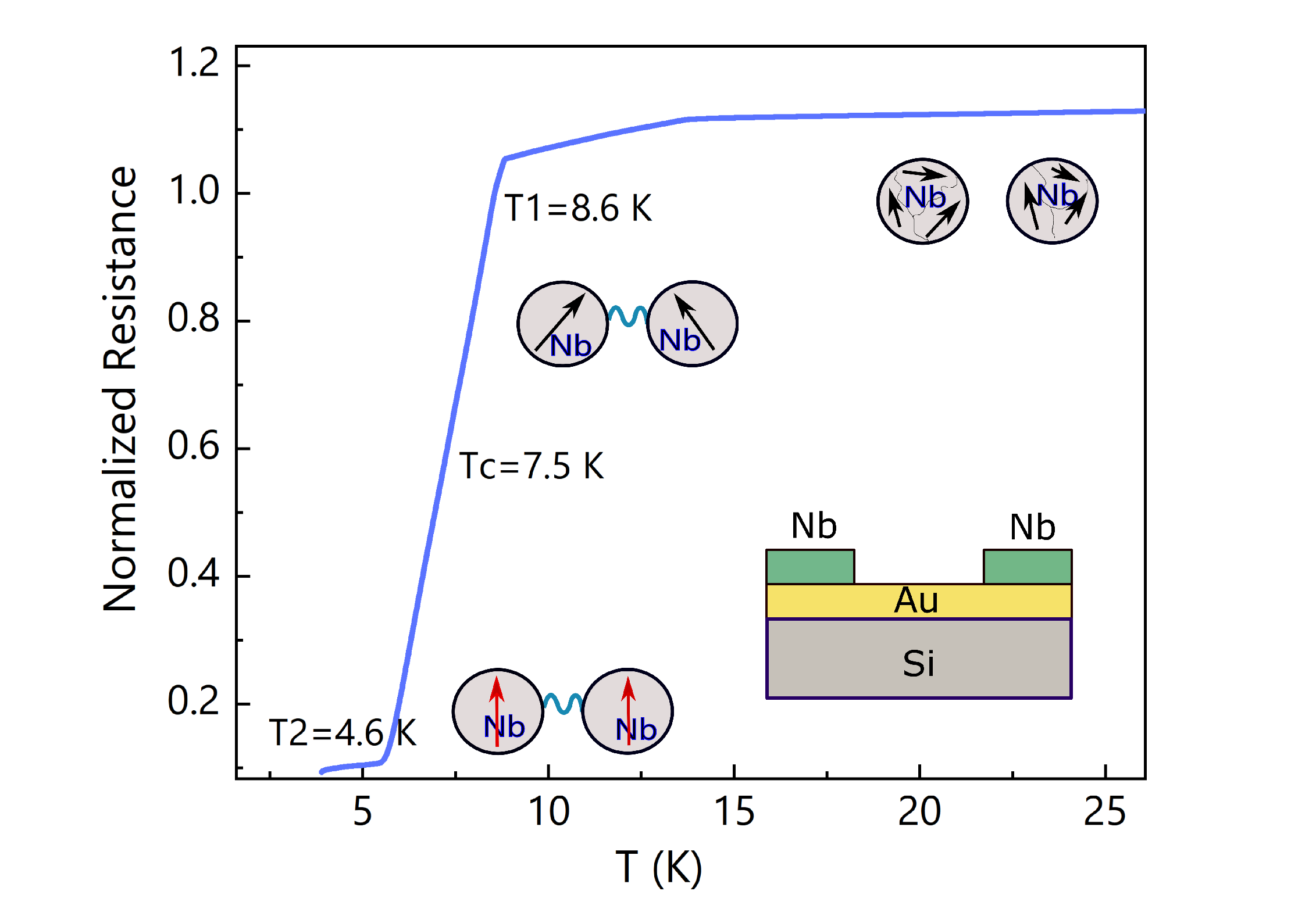