Fish skin is a multifunctional barrier tissue with high regeneration capacity that interacts with the surrounding environment and provides protection. Functional importance, high complexity and activity make skin an attractive tissue for studying the effects of environmental challenges and chemical stressors in fish. The aim of this work was to characterize skin from polar cod (Boreogadus saida) and Atlantic cod (Gadus morhua), and to test cod skin as an in vitro model in exposure studies. Both species have similar skin structures including epidermis, mucous cells, club cells and scales. However, microarchitectural differences were detected; Atlantic cod has a smooth epidermal surface and overlapping scales, whereas polar cod has a folded outer surface and discontinuous scales. Genome-wide microarray found 6.5k genes with expression differences, which suggested more active turnover of proteins, proliferation and motility of cells in skin of polar cod. Hydrogen peroxide (H2O2) was used to examine skin responses. Transcriptome response was stronger in the skin of polar cod, with 155 differentially expressed genes. The skin from Atlantic cod was further used to develop a cell culture. H2O2 decreased the cell migration rate in a dose-dependent manner, which could indicate reduced skin healing capacity. The results revealed novel skin structures and confirmed that the skin from cod is a promising tissue for evaluation of stressors. View Full-Text
Keywords: atlantic cod; hydrogen peroxide; in vitro; keratocytes; polar cod; skin atlantic cod; hydrogen peroxide; in vitro; keratocytes; polar cod; skin
►▼ Show Figures 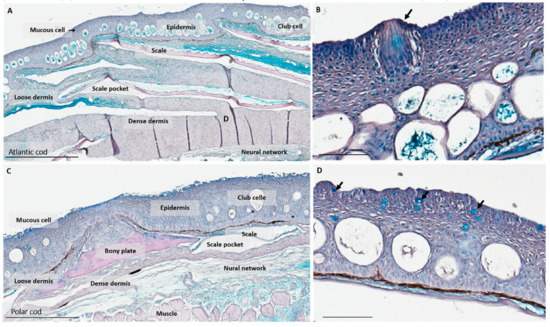