No Correlation between Endo- and Exoskeletal Regenerative Capacities in Teleost Species

Repeated hormone injections are routinely used to induce advanced stages of oogenesis in freshwater eels, but this approach may result in aberrant germ cell development. To investigate the underlying causes, levels of sex steroids (testosterone, T; estradiol-17β, E2) and ovarian steroidogenic enzyme mRNAs were compared between artificially maturing Japanese eels and wild-caught, spontaneously maturing New Zealand longfin eels. The latter were employed as reference, as wild Japanese eels in advanced stages of oogenesis are near-impossible to catch. Serum T levels in artificially maturing Japanese eel changed with stage in a pattern that was comparable to that in longfin eels. Likewise, ovarian mRNA levels of most steroidogenic enzyme genes were not qualitatively dissimilar between both eel species when taking developmental stage into account. However, aromatase (cyp19a) mRNA levels, together with serum E2 levels, rapidly increased in artificially maturing Japanese eels in mid-late stages of oogenesis (gonadosomatic index, GSI = 13.8%), whereas no such increase was evident in longfin eels (GSI ~ 6.9%). In addition, sex steroid and target gene mRNA levels fluctuated drastically with each hormone injection. We contend that expression of most target genes, possibly even that of cyp19a, during induced oogenesis could be “normal”, with the drastic fluctuations due most likely to hormone delivery through repeated injections. The effects of these fluctuations on gamete quality remain unknown and resolving this issue may prove fruitful in the future to further artificial propagation of anguillid eels. View Full-Text
Keywords: eel; ovarian development; steroidogenic enzyme eel; ovarian development; steroidogenic enzyme
►▼ Show Figures 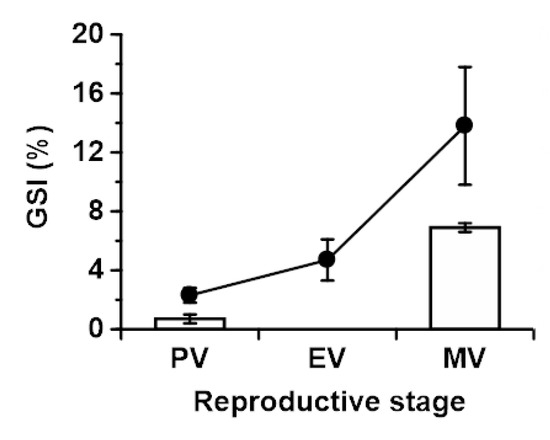