Positive Welfare for Fishes: Rationale and Areas for Future Study

During the last century, the blooms of the toxic haptophyte Prymnesium parvum have been responsible for massive fish kills in both aquaculture and wild populations. Despite decades of research, the ichthyotoxic properties of P. parvum, and how this alga affects fish, is still debated. Using a novel device to measure the respirometry, ventilation volume, ventilation frequency, oxygen extraction, and oxygen consumption of undisturbed European plaice (Pleuronectes platessa) were acquired during exposure to two algal species as well as hypoxia. Fourteen fish (258 ± 44 g) were initially exposed to severe hypoxia and left to recover for at least 48 h. Half of these fish were then exposed to known harmful concentrations of P. parvum (median ± standard deviation (SD); 2.6 × 105 ± 0.6 × 105 cells mL−1), while the remaining half were exposed to the non-toxic alga Rhodomonas salina (median ± SD; 3.2 × 105 ± 0.7 × 105 cells mL−1). During exposure to severe hypoxia, all of the fish were able to maintain oxygen consumption by increasing the ventilation volume. The results from fish that were exposed to P. parvum showed a significant decrease in oxygen extraction (median ± SD; 52.6 ± 6.9 percentage points) from pre-exposure to the end of the experiment, as opposed to fish exposed to R. salina, which were unaffected. These results indicate that suffocation affects the European plaice when exposed to P. parvum. The observed severe decrease in oxygen extraction can be ascribed to either damage of the gill epithelia or increased mucus secretion on the gills, as both would limit the transfer of oxygen, and both have been observed. View Full-Text
Keywords: Pleuronectes platessa; Prymnesium parvum; oxygen extraction efficiency; harmful algal blooms; ichthyotoxic algae; ventilatory requirement; ventilation Pleuronectes platessa; Prymnesium parvum; oxygen extraction efficiency; harmful algal blooms; ichthyotoxic algae; ventilatory requirement; ventilation
►▼ Show Figures 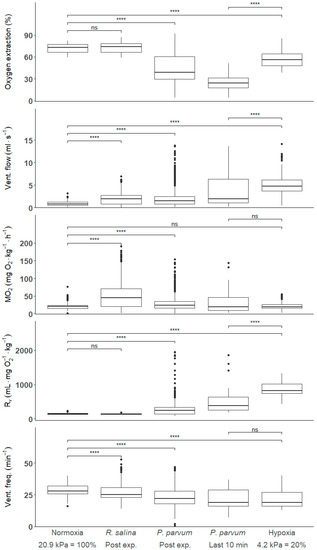