Praziquantel (PZQ), an active compound against Platyhelminthes, is an essential anthelmintic for the aquaculture industry. However, there are few reports of the environmental risks of PZQ use in aquaculture. In this study, we monitored PZQ in water and sediment at an aquaculture site of Japanese amberjack, also called yellowtail (Seriola quinqueradiata). Although PZQ was detected in water during treatment and 3 days post-treatment, PZQ levels were below the detectable limit in water 60 m from the net pen during the treatment, and in all sediment samples. In this preliminary study, we could not detect residue of PZQ from sediments in the aquaculture site, and no evidence about environmental effect of PZQ administration was obtained.
Keywords: Praziquantel; Japanese amberjack (Seriola quinqueradiata); water; sediment Praziquantel; Japanese amberjack (Seriola quinqueradiata); water; sediment

Praziquantel (PZQ), 2-(cyclohexyl-carbonyl)-1,2,3,6,7,11b-hexahydro-4H-pyrazino [2,1-a] isoquinoline-4-one, is an effective substance against many species of Platyhelminthes [1,2]. PZQ has been used for both human and veterinary medicine. Compared with benzimidazole-based compounds, mebendazole and febantel, PZQ is the most widely used in the treatment of various fish parasites [3]. Although PZQ surface-coating can affect palatability of feed pellet for yellowtail kingfish (Seriola lalandi) [4,5], in-feed administration of PZQ is the only reliable method to control the internal parasites, such as blood flukes caused by trematodes [3,6].
PZQ is an essential anthelmintic for the aquaculture industry. In Japan, PZQ was approved for oral administration in cultured fish belonging to the order Perciformes against Benedenia seriolae or Cardicola opisthorchis parasites. Heavy use of drugs, including antibiotics, in aquaculture results in environmental burdens, for example, alterations in water column and sediment microflora, and emergence of drug resistance [7]. However, few reports have addressed the environmental impacts of veterinary use of PZQ [8]. Therefore, we preliminarily monitored water and sediment PZQ levels after oral administration in an aquaculture site cultivating Japanese amberjack, also called yellowtail (Seriola quinqueradiata).

Water PZQ levels pre-treatment, during the treatment, and post-treatment are shown in Table 1. Although 0.003 mg/L of PZQ was detected in net pen surface water during treatment, 30 m or 60 m distance from the pen was sufficient for PZQ to disperse. Further, PZQ was below the detectable limit (0.01 mg/kg dry weight) in all sediment samples, including the sample collected directly beneath the net pen (Table 2).

Drug use in aquaculture, including PZQ, should be minimized to mitigate environmental risks as well as food safety concerns. This preliminary study indicates that the dosage and administration protocol utilized did not result in PZQ accumulation in the aquaculture site, even though PZQ was used for 10 years at least. The finding that PZQ was nearly undetectable in water 3 days post-treatment is consistent with a prior study, which demonstrated that 2 mg/L PZQ was degraded to below the detectable limit in a recirculating system within 2–3 days [9].
The environmental impact of orally administered emamectin benzonate (EB), an anti-sea lice active compound, has been studied. EB was detected in sediment samples taken 1–4 months post-treatment at an Atlantic salmon (Salmo salar) farm in Scotland [10] and in sediment samples collected during treatment and 116 days post-treatment at a salmon farm in Canada [11]. Contrastingly, PZQ was not detected from sediment samples collected 1 month post-treatment in this study.
However, the duration of EB efficacy was reported to be 3–4 months [12,13], while PZQ is rapidly absorbed and eliminated in 24 h after an oral administration in yellowtail kingfish (Seriola lalandi) [14,15] and in Pacific bluefin tuna (Thunnus orientalis) [16]. In Japanese amberjack, concentrations of PZQ in plasma, skin mucus, muscle liver, and kidney decrease to below detectable limits within 48 h of oral administration of 150 mg/kg for 3 days [17]. Small amounts of PZQ were detected from the water 3 days post-treatment, but the possibility of re-detection from water after that sampling point was thought to be low. Although environmental effects of PZQ metabolites should also be considered, the anthelmintic activity of PZQ metabolites in yellowtail kingfish was reported to be minor [18]. In the current preliminary study, no evidence regarding environmental impacts of oral PZQ administration in Japanese amberjack aquaculture was obtained, although further monitoring will be needed.
Because parasitic diseases caused by Monogenea and Trematoda have become a serious problem for Japanese amberjack aquaculture [19], oral treatment with PZQ is essential to control these diseases. Recently, PZQ-resistance in Schistosoma mansoni and Schistosoma japonicum was reported to be experimentally induced under continuous drug pressure [20]. Although PZQ drug resistance in parasites infecting cultured fish has not been previously reported, careful monitoring should be undertaken in order to check for sensitivity to PZQ and also mitigate the risk of potential infections spreading to wild fish.
In conclusion, we preliminarily monitored water and sediment PZQ levels after oral administration in an aquaculture site cultivating Japanese amberjack. Although PZQ was detected in water collected from the surface water of the net pen during PZQ administration, it rapidly dispersed, and was not detected in the sediment—even in sediment collected directly beneath the net pen.

Samples were taken from an aquaculture site cultivating Japanese amberjack in Owase, Mie, Japan from 22 June to 24 August 2018. A net pen (Length: 9 m, Width: 9 m, Depth: 10.5 m) located at 34°04′38.8″ N/136°13′12.4″ E was monitored for PZQ levels (Figure 1). Latitude/longitude and water depth in the sampling points are indicated in Table 3. Symptoms of trematode whirling disease caused by Galactosomum sp. were detected in juvenile Japanese amberjacks in the monitored net pen, and Hada Clean® (Bayer Japan, Osaka, Japan) which includes 50% of PZQ as an active agent, was administered orally for 3 days from 25 July to 27 July, 2018, in the monitored net pen under veterinarian prescription (Table 4). The drug was attached to feed pellets using a fish oil coating. The symptoms of trematode whirling disease are observed in the site every year, and oral administration of PZQ to the monitored net pen has been repeated over 10 years at least.
Surface water and sediments were collected 0 m, 30 m, and 60 m from the net pen along the water current, and additionally outside of the aquaculture site (beyond the map in Figure 1, and approximately 800 m south-south-east from the net pen). Water samples were collected using a water bottle sampler (Rigo, Tokyo, Japan) at 1 m depth, and sediment samples were collected using an Ekman-Birge bottom sampler (Rigo, Tokyo, Japan). All samples were protected from UV and stored at 4 °C until analysis. 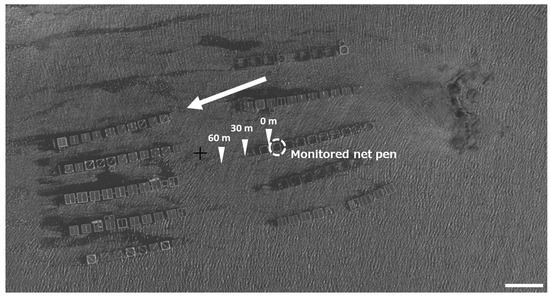 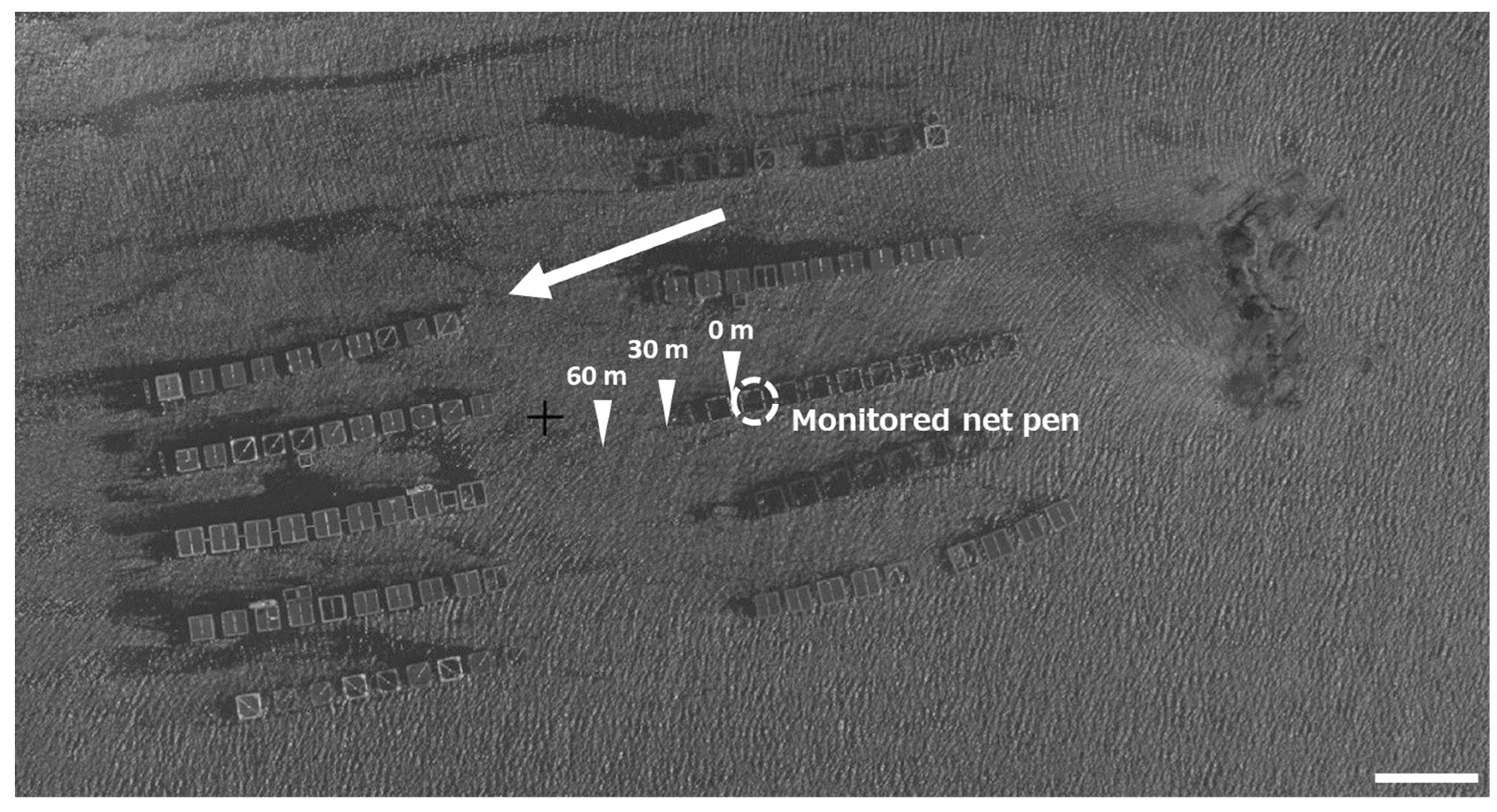